Oct 23, 2014 Dr Harry Zervos
Structural electronics (SE) is one of the most important emerging technologies in this century. Dumb structural components that traditionally provided mechanical stability are now bestowed with electronic and electric functionality - aircraft fuselage, car body, even plastic coating on a cable and the humble printed circuit board. These functional structures can be energy harvesters or storage devices, switches and antennas. This allows for more design freedom as bulkier electronic components get a reduced footprint. Reliable function at lower cost and with little weight gain to the overall system are just some of the forecasted benefits of the technology. Learn more at the forthcoming IDTechEx events: Energy Harvesting & Storage and Printed Electronics USA - www.IDTechEx.com/USA - Santa Clara, Nov 19-20 2014.
In the view of all the major solar power people - from Japan to the USA - that analysts IDTechEx have interviewed recently, one of the first applications envisaged is building-integrated photovoltaics (BIPV). With BIPV, there is quicker payback. Instead of being an expensive retrofit to a building, photovoltaics vanishes because it becomes such things as the solar tile that looks like a regular tile and a fully transparent solar window. That typically involves a plastic coating that internally reflects the light down to an unusually efficient photovoltaic strip at the bottom. The 7000 strong ITRI Research Institute in Taiwan was one place visited by analysts IDTechEx recently and has been researching such applications of the technology.
Photovoltaics will not only be integrated in buildings, although that might be one of the market sectors that can lead to significant volume growth. Efforts worldwide are also looking into the integration of photovoltaic cells in consumer electronics, or even in indoor applications in building automation, such as actuators and wireless sensor networks. Companies including Alta Devices and G24 Power, presenting and exhibiting at the upcoming IDTechEx event in Santa Clara on the topic of energy harvesting and storage, are working on commercializing products in this space. G24 Power will be showcasing at their booth their folio solar powered keyboard for iPad Air and the new iPad Air 2. Barry Jenkins, Business Development Manager at G24 Power told IDTechEx: "We will also be demonstrating the world's first commercially available solar powered ibeacon (wireless sensors used for proximity marketing). We will have dozens of these beacons available along with iPads to demonstrate how they work!" 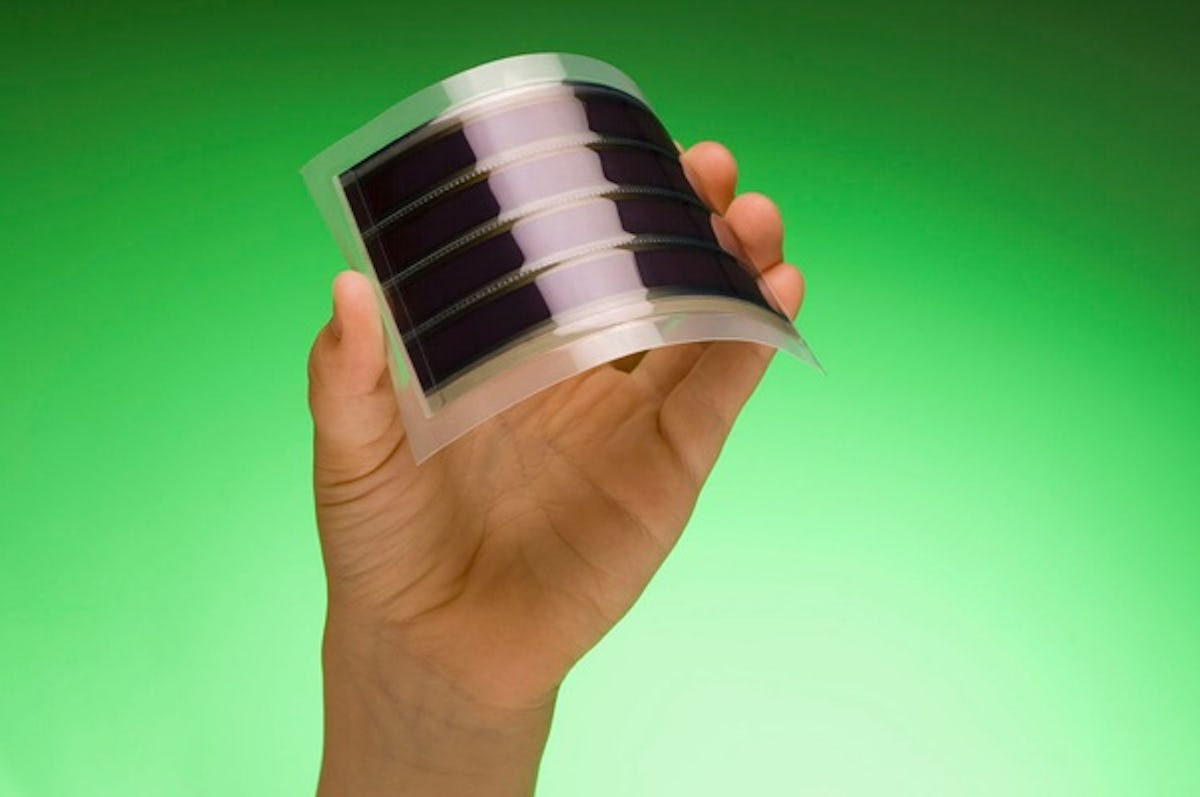 A dye sensitised cell made by G24 Power
IDTechEx has a new report, Structural Electronics 2015-2025: Applications, Technologies, Forecasts that explains the road map. For example, it is proving elusive to do the elegant thing and make the associated energy storage structural as well. Sharp Laboratories has researched laminar batteries across the back of photovoltaic sheets and others plan laminar supercapacitors to do the same thing. They are even planned for storage layers under PV layers on the fibers in our clothing in the EC Powerweave program. However, there are alternative approaches, such as thermal storage. The University of Vasco Region and Euskal Herriko University in Spain have made prototypes of phase-changing paraffin used in thin aluminium plates that stores thermal solar energy from the usual flow of hot water created and releases that energy by phase change when needed. You use the heat or convert it to electricity. The plates achieve fast release of energy when needed into structures to replace dumb building structures. The large co-located IDTechEx events in Santa Clara, CA cover these and many more emerging technologies on Nov 19-20.
For more information visit www.IDTechEx.com/USA or contact Corinne Jennings: c.jennings@IDTechEx.com
PrintForwardTweetLikePinredditShare
Previous
Next