Oct 17, 2014 Raghu Das
In 2012 347 million people worldwide had diabetes according to the World Health Organization. Disposable glucose test strips have improved the lives of millions of diabetic patients who need to monitor their blood glucose level on a regular basis. Each strip has a set of electrodes and glucose is detected via an electrochemical reaction. They require the use of a reading device to measure the electrochemical current and display the results.
The big four in the industry are LifeScan (a unit of Johnson and Johnson), Roche, Bayer and Abbott. There are also smaller players like Sanofi trying to differentiate with readers that connect to a smartphone. Companies like Wal-Mart have their own brand of readers/test strips on their retail floor.
The electrodes on glucose test strips are made either by printing or sputtering. For instance, Roche's plant in Indianapolis produced approximately 4 billion test strips in 2012. The electrodes were made from laser-ablated gold. In contrast, LifeScan (a Johnson & Johnson company) produced 5.3 billion strips and 85% were made by printing the electrodes.
Overall, IDTechEx research for the report Printed and Flexible Sensors 2014-2024 estimates that around 70% of all test strips are currently printed. The main reason behind this high number is that screen printed carbon electrodes give a good compromise across all the important parameters.
Test strips forecast
Printed biosensors are essentially composed of glucose test strips which currently represent a market of around $6.3 billion (value of the entire test strip, not just the printed materials). In 2013, manufacturers were given a 3-year grace period before new ISO standards apply in 2016. IDTechEx forecasts a dip caused by the new restrictions (products forced to be phased out). In this scenario, some leading manufacturers will be able to meet the new standards and will continue selling printed test strips that meet the new specifications. 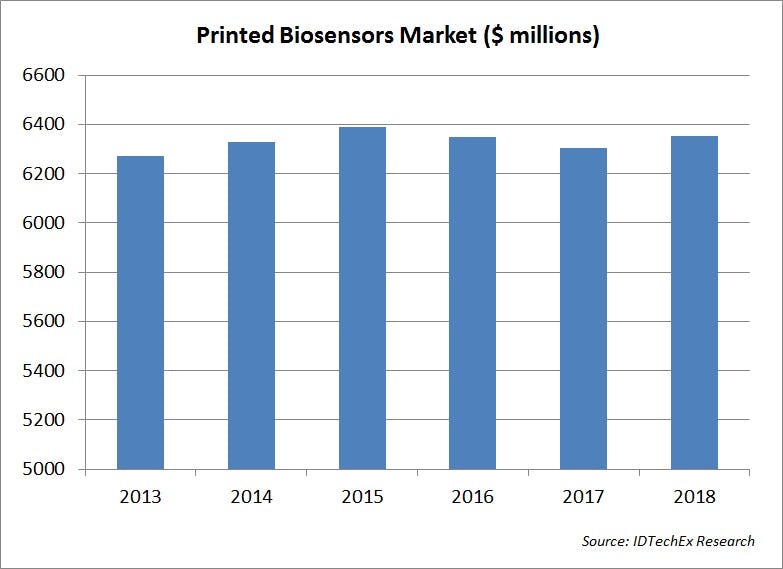 Source: IDTechEx report Printed and Flexible Sensors 2014-2024 www.IDTechEx.com/sensors
However, a much larger potential impact is the downward price pressure from Medicare in the US. Medicare is seeking to reimburse less money for glucose test strips and intends to significantly push down the price and therefore margins on test strips for suppliers - by as much as 70%. That will have an impact around the world as other countries would expect the same pricing. The golden days of high margin disposable glucose test strips may be coming to an end.
Enter wearable technology
Indeed, one of the leading brands has been trying to find a buyer, but with no success so far. Therefore they seek differentiation and new products. In the main, this comes in the form of technologies that can be used to detect glucose without requiring the patient to cut themselves numerous times per day. The main innovations have therefore been wearable devices, with companies such as Medtronic, Dexcom, Google and Abbott involved.
Mixed success
So far, commercial devices have been relatively unsuccessful. This is because in the US and some other healthcare systems, they are not eligible for reimbursement from healthcare authorities, unlike most test strips. It takes time for them to be tested and approved. Secondly, it is also the inconvenience, as many devices on the market are bulky systems, clumsy and awkward to wear. Additionally, they still need calibration, which can involve the need for up to two blood samples test strips each day.
Wearable technology innovation
However, exciting developments are being made, as covered in the IDTechEx report Wearable Technology 2014-2024: Technologies, Markets, Forecasts. This includes Abbott Diabetes gearing up to launch a new glucose monitoring device at the end of 2014. This is a wearable device, with an armband containing the sensor which pierces the skin to have contact with blood and therefore take measurements. The main improvement is that the sensors lasts for 14 days, whereas most others last for 7 days, and critically no calibrations are needed, so users still do not have to use test strips. The data can be read by an NFC reader - which is a stand-alone reader today but could become available as an app on NFC-enabled cell phones in the future.
Google has developed a "smart" contact lens to help diabetics monitor their glucose levels. Google's prototype lens was first revealed in January 2014, and in July 2014 Google announced that it has been licensed to Novartis. The lens uses a wireless chip (Adhering to UHF RFID standards) and miniaturized glucose sensors embedded between two layers of soft contact lens material. The power and data transfer comes from RFID capability.
Huge opportunities still exist
However, despite these innovation IDTechEx analysts have come to the conclusion that there are still problems. For example, with the lens, the glucose concentration in the eye can be very dilute and understanding the dilution processes is critical. Other solutions still need sensors that puncture the skin.
But most likely the biggest challenge these companies face is that until these alternatives become approved for reimbursement IDTechEx believes that sales will be limited, targeted to those willing to pay a premium price for the convenience of not having to cut themselves multiple times each day.
Latest developments
The IDTechEx event Wearable Technology Live! USA 2014 in Santa Clara, CA, on November 19-20, focuses on wearable technologies, applications, and their commercialization progress. Critically, it provides a view from end-users from a variety of sectors such as health & fitness, sportswear, textiles and consumer electronic industries. The end-users will outline their requirements and wish-list, while also discussing their latest progress. IDTechEx analysts will also provide a detailed overview of the market. This is followed by those developing a wide range of solutions, from sensors through to textile and stretchable electronics to complete devices.
Presenting companies include Adidas, Oxylane, Google, Bayer Healthcare, Fitbit, 4iii, Samsung and many more. Additionally, the full value chain is covered from energy harvesting progress to power wearable electronics to printed electronics. For full details see www.IDTechEx.com/wtusa.
Top image: LifeScan OneTouch®, Johnson & Johnson
PrintForwardTweetLikePinredditShare
Previous
Next