Jun 22, 2018 Dr Lorenzo Grande
The rising tech giants like publicity stunts that give their audience the impression they are at the forefront of innovation; one of such examples is the delivery drone being developed by Amazon that can operate round the clock and bring parcels and packages straight to your doorstep. While these projects are worth following, it is unlikely that they will see the light of day ubiquitously, due to unresolved issues like flying range and limited space to land.
In the meantime, however, the transportation industry is renewing itself from within. With on-road transport accounting for up to 70% of all transported goods worldwide, and the almost entirety of the associated vehicle fleet relying on dirty diesel engines, it is clear that new propulsion technologies are needed; not only to reduce CO2 emissions, but also to address other issues like noise pollution in city centres and rising operating/maintenance costs.
Electric powertrains can solve all of the above, thanks to a smaller number of moving parts that can tear and wear over time, electricity being cheaper than diesel, and e-motor noise being much lower than that of diesel engines. Several small companies have started retrofitting their delivery vans in order to comply with increasingly restrictive legislation and meet CO2 reduction targets; company DHL has gone so far as to produce its own electric van fleet in response to a bearish attitude from the main players in the market. 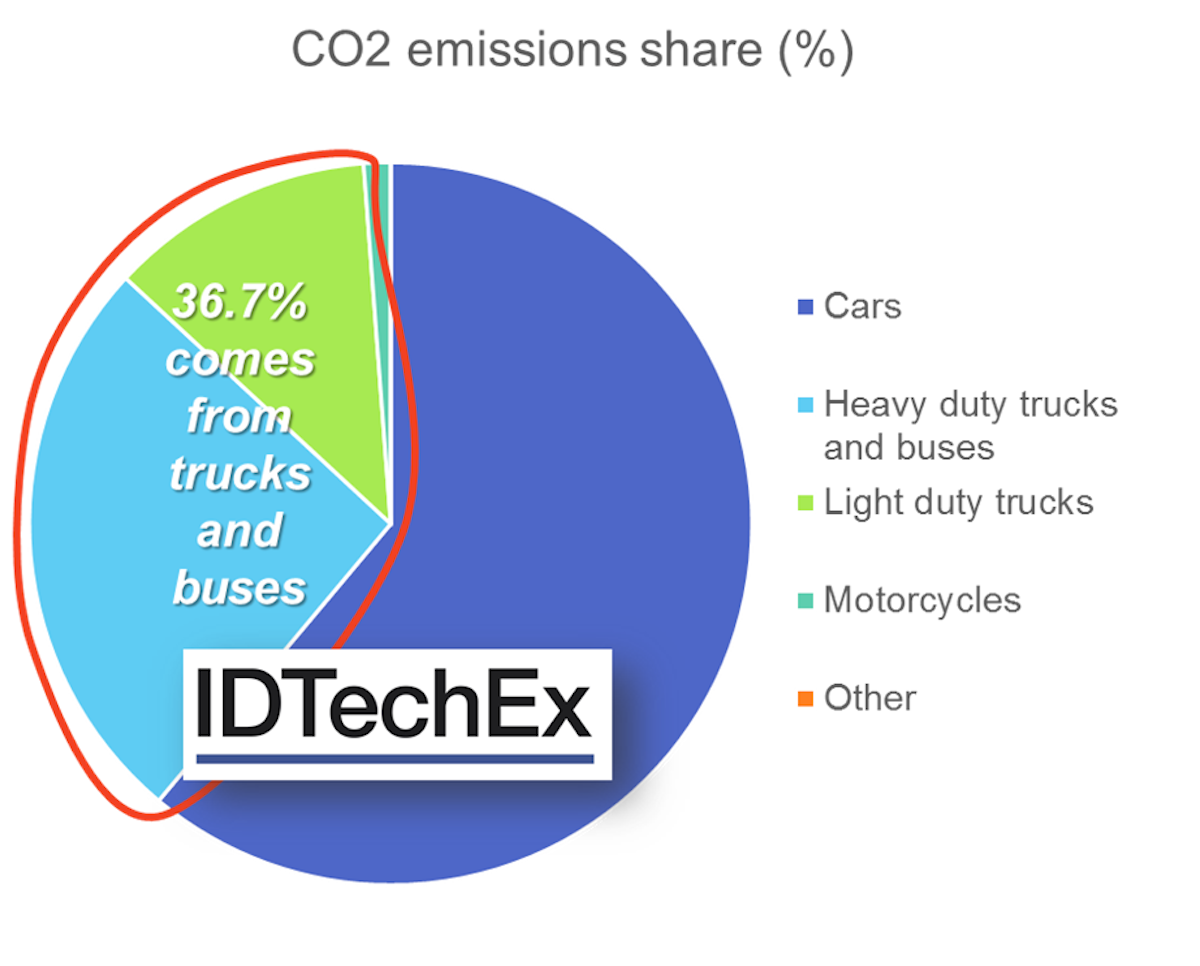 The bottleneck, until now, was naturally the total cost of ownership. Electric vehicles are more expensive than diesel ones and companies need to be reassured that no hidden costs like battery replacement or expensive charging infrastructure lie behind the mirage of cheap electricity and reduced maintenance. As battery Gigafactories are being set up all around the globe, it is very likely that the first markets they will serve will not be buses and passenger cars, but rather commercial and industrial vehicles, where the synergic combination of private ownership and high vehicle utilisation make a compelling case for fleet managers to convert their assets into electric. Vans and trucks, as a result, are likely to benefit from this technology shift, and the main OEMs are preparing to be at the forefront of this change.
In a brand-new report titled Electric Trucks and Delivery Vans 2018-2028 IDTechEx have analysed the light-duty, medium-duty, and heavy-duty vehicle segments and identified the main innovators as well as the hurdles that can slow down e-van and e-truck adoption. For instance, while diesel bans are being enacted around the globe, relegating polluting vehicles outside our cities, it is not clear whether public administrations will pair those restrictions with widespread charging infrastructure to ensure a level-playing field for fleet managers. At the same time, governments might see a better return on investment if they decide to combat CO2 and NOx emissions by subsidizing electric commercial vehicles, as opposed to passenger cars.
The report discusses the above-mentioned questions, as well as present its readers with a technology overview on what Tier 1 and Tier 2 suppliers are doing around the world to make electric powertrains smaller and more efficient. An entire section of the report is dedicated to the hard choice between BEV and PHEV fleets, and which one is the best for any given application. Another section of the report deals with the equally tough choice between battery-powered electric trucks and ones propelled by fuel cells. FCEVs are currently more expensive, less efficient, and lack the necessary refuelling infrastructure; at the same time, however, they can enable a much longer range than BEVs. Will a legacy effect from the car industry prevail to favour Li-ion batteries, or will the fuel cell industry witness a second renaissance and finally find a viable commercial application?

All of the above is discussed and presented in this brand-new report, together with mentions on the parallel opportunities offered by autonomous driving, and enabling technologies like smart roads. Please visit the report page to download some sample slides and get in touch with our sales team to learn more about Electric Trucks and Delivery Vans 2018-2028.
PrintForwardTweetLikePinredditShare
Previous
Next