Barrier layers for flexible electronics - a $200m market by 2024

Barrier layers for flexible electronics - a $200m market by 2024

Oct 01, 2014 Dr Harry Zervos
OLED displays are the biggest opportunity for flexible encapsulation and for that reason IDTechEx has highlighted the most significant advances in the technology in its recently updated report on the topic Barrier Layers for Flexible Electronics 2015-2025: Technologies, Markets, Forecasts.
The market is expected to reach over $200 million by 2024, driven mainly by the proliferation of flexible displays for mobile platforms such as phones, tablets and wearables. 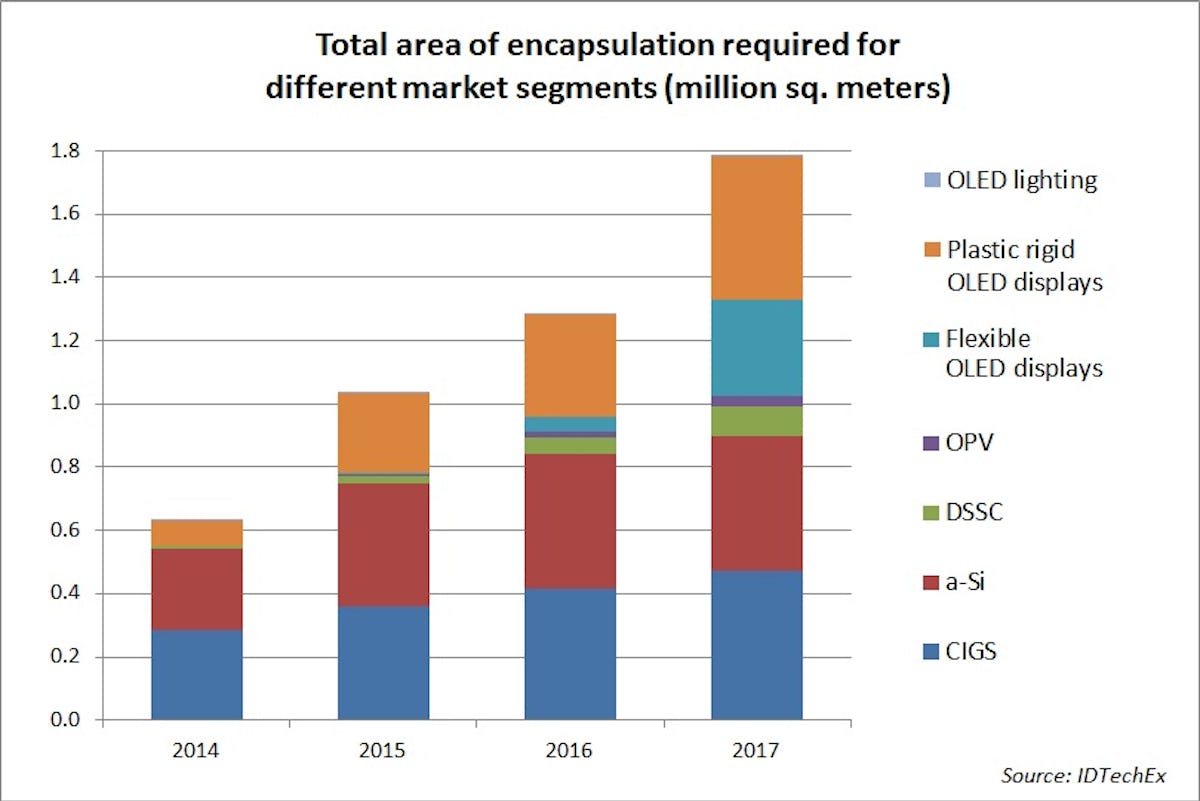 Understanding technology trends from major adopters is key, starting with Samsung and LG. Samsung seems to be ahead of the other major adopters, by further developing technology the Vitex technology, acquired in 2010.
Trend within major display companies
- Samsung
Samsung SDC has adopted direct encapsulation by thin film encapsulation (TFE) using the Vitex multilayer (ML) technology. It is implemented with three or less dyads. This technology is currently used in development and production and, with variations of the deposition techniques, it is expected to hold for the next generation of foldable displays.
IDTechEx affiliate experts report to us that many of the "particles" giving rise to problems with encapsulation technology do not come from the encapsulation process itself, as is often reported, but from the OLED fabrication process.
- LG
LG Display has adopted a hybrid solution based on TFE - ML encapsulation inorganic/organic/inorganic plus a face-encapsulated barrier. Inorganic silicon nitride films are probably deposited by PE-CVD. The organic layer is several microns thick, deposited by screen-printing according to papers presented at SID in 2014. On top of this TFE barrier, a barrier film is laminated by "barrier pressure sensitive adhesive" (B-PSA).
- Others
Several of the "second tier" OLED display manufacturers (e.g. AUO, BOE) adopt the "hybrid" scheme. In those companies, the present focus is bringing up OLED production based on glass. Flexible displays are at demonstrator and R&D levels. R&D groups are evaluating TFE encapsulation technologies around the ML concept testing different inorganic deposition techniques. Because the barrier performance is not satisfactory, the final solution includes a laminated barrier. Many of the efforts and evaluations styles are comparable to what Samsung and LG were doing several years ago as research groups are at the early stages of their respective learning curve.
TFE vs. barrier lamination
TFE as described above is obviously an in-line deposition process. When comparing in-line deposition versus barrier film lamination, both approaches have merits and drawbacks.
In-line deposition, if properly done, has the potential for best performance on reliability test related to protection of the OLED from the environment (=barrier performance) and flexibility. However, the direct deposition of inorganic layers on the device requires the deposition technology to be compatible with the bare device. This constrains temperature, process conditions when plasmas are used, and choice of precursors. If TFE only is used, more stringent low-defectivity requirements on the overall process of OLED (AMOLED) fabrication must be implemented. The display edge seal can be narrower leading to a narrower bezel.
Encapsulation by lamination of engineered foil has higher material costs due to the cost of base-film, adhesives, and desiccants. The bonding process is also relatively slow. Substrates for barrier films are intrinsically expensive because of the quality required: high transparency, low defect concentration, planarization, clean production environment, and packaging (including using clean protective films or in-situ deposited peelable protective layer (DuPont Teijin discusses this point when talking on the variation in price for grades of PET utilized in electronics applications), cleanliness and purity of starting resins. Adhesives and desiccants compatible with OLEDs are in development. Progress has been made, but materials are expensive because of the development cost and low volume production.
The report also discusses atomic layer deposition of barrier on foil which may be possible for R2R web systems. Companies positioning themselves as ALD barrier film providers include Lotus, Beneq, and Veeco among others. Flexible glass is also covered, even though IDTechEx predicts a slower time for the technology to take off due to performance optimization problems.
Finally, the report discusses details of new water vapor transmission rate measurement equipment, in an effort to reach resolutions near the very low detection limits that OLED display requirements dictate.
For more information see www.IDTechEx.com/barrier.
PrintForwardTweetLikePinredditShare
Previous
Next