Apr 01, 2020 Dr Michael Dent
The world has a plastics problem. Every day, approximately 8 million pieces of plastic make their way into the world's oceans and plastic pollution can now be found on every beach in the world, from busy tourist beaches to uninhabited tropical islands.
Bioplastics, plastics produced from biomass feedstocks, could help solve the problem. Bioplastics such as polylactic acid, polyhydroxyalkanoates and polybutyl succinate are biodegradable and can have similar, if not identical, functionalities to their fossil-based counterparts. Yet, despite their environmental benefits, bioplastics are still struggling to wrestle market share away from conventional plastics. The new IDTechEx report, Bioplastics 2020-2025, explores the factors helping and hindering the adoption of bioplastics.
There are several barriers to more widespread adoption of bioplastics. The major issue is that they are still more expensive to produce than petrochemically-derived plastics. Despite a majority of consumers saying they want brands that are sustainable, few are actually willing to pay extra for it, with willingness to pay falling sharply for products with a Green Premium over 5%. Oil prices fell in 2014 and have stayed low since then, making it even harder for bioplastics to compete on price. As a finite resource, oil prices cannot remain this low forever, but until prices rise, bioplastics producers will have to work hard to cut production costs. 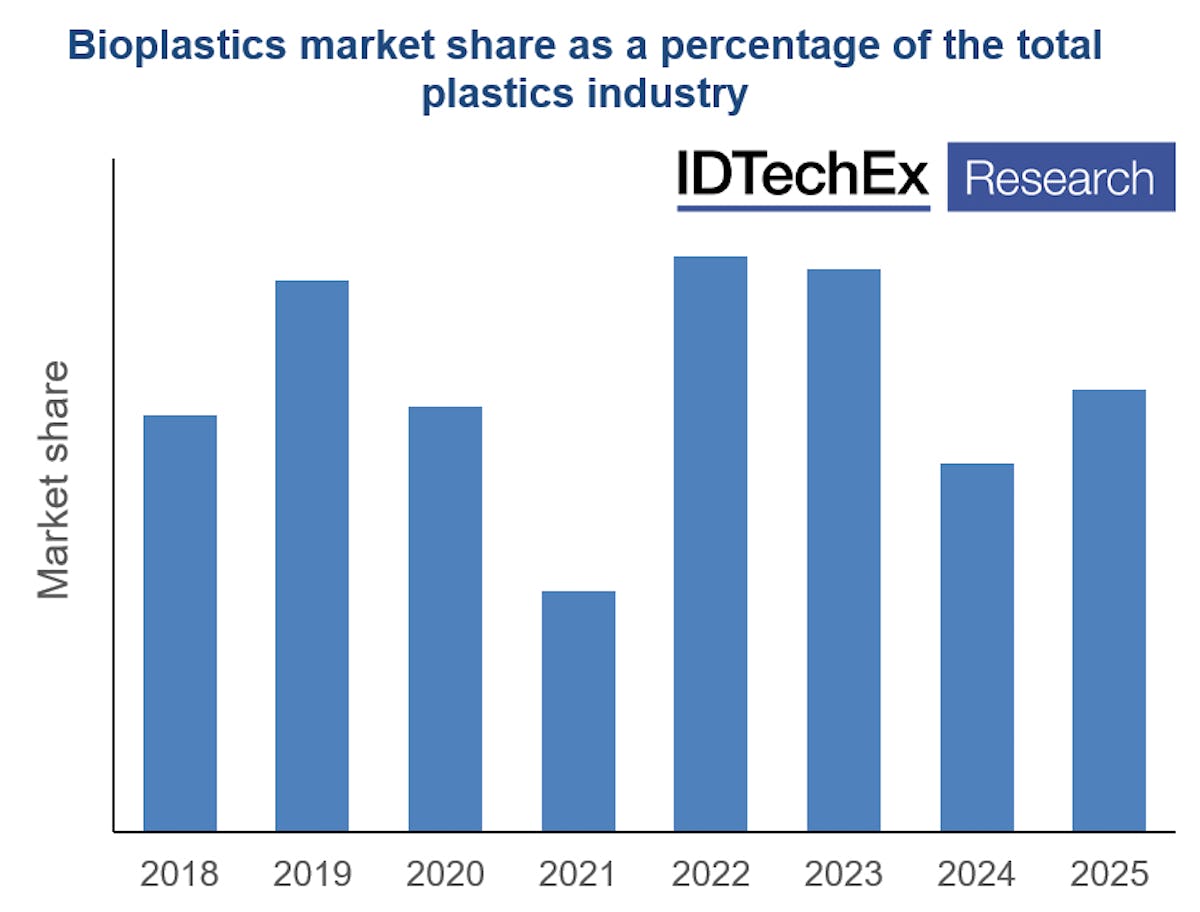 Despite environmental benefits, bioplastics are struggling to gain market share from fossil-based plastics (see report for full market share information). Source: IDTechEx Report Bioplastics 2020-2025.
Another issue is that despite demonstrating proof of concepts in an academic setting, the transition to industrial scale production is far from straightforward and many companies have gone bankrupt trying to make the jump. A conservative approach to production methods and the complexity of high volume fermentation do not marry well. Furthermore, there is a dearth of capital investment to help academic innovators and early stage startups expand production, both from VCs and from governments.
However, all is not lost. Governments are increasingly introducing policy changes to help overcome these challenges. For example, in 2018, the EU updated its Bioeconomy Strategy, making funding available for circular economy projects, and in 2019 the San Francisco Bay Area introduced a range of restriction on single use plastics. Bioplastics companies are also increasingly employing innovative technical approaches to reduce costs, including using synthetic biology. However, it will still be a difficult road forward for bioplastics. Bioplastics 2020-2025, a new report by IDTechEx provides a detailed technical evaluation of bioplastics and outlines the way forward.
PrintForwardTweetLikePinredditShare
Previous
Next