May 28, 2021 Dr Michael Dent
Carbon capture technology may be essential in helping the world in the fight against climate change. By fitting fossil fuel power stations and industrial emitters with carbon capture technology, it is possible to reduce their carbon dioxide emissions by over 90%. Until renewable energy is capable of providing the bulk of the world's power needs, carbon capture may have to play a major role if the world is to meet the 2°C warming target outlined by the Paris Agreement. "Carbon Capture, Utilization, and Storage 2021-2040", a new report by IDTechEx, explores the technical and industrial factors that will play a role in deciding whether carbon capture technology can live up to its potential as a key technology in the fight against climate change.
However, capturing CO2 from point sources such as power stations and steel manufacturing plants may not be enough to avoid the worst impacts of climate change. Most scenarios outlined by the Intergovernmental Panel on Climate Change (IPCC) for keeping the world below 2°C of warming require the active removal of CO2 from the atmosphere. Outside of bioenergy with carbon capture and storage (BECCS), which remains highly unproven, this is not possible with point source carbon capture.
A potential solution is direct air capture (DAC) technology, which uses carbon capture techniques to strip CO2 from atmospheric air. The technology has generated much excitement around the world, with many hoping it could help to directly reverse the impacts of climate change. However, despite the enthusiasm, the technology is still at a very early stage, is unproven at scale, and is currently far more expensive than point-source carbon capture. So, does DAC justify the excitement or is it doomed to fail? And why not just plant trees instead?
The DAC process is similar to an artificial tree; ambient air enters the DAC device and a range of chemical and physical processes extract the CO2 before the rest of the air is released back into the atmosphere. However, the process is much more efficient than planting trees, requiring less land and fewer resources. For example, Swiss DAC company Climeworks claims that its plant in Hinwil, Switzerland, can remove 900 tonnes of CO2 per year, the equivalent of 36,000 trees.
Commercial DAC methods work via a similar mechanism to point-source carbon capture. First, large fans push ambient air through a filter containing a substance that physically or chemically binds the CO-2, with the CO2-free air being released back into the environment. For example, sodium hydroxide solution will react with CO2 to form a stable sodium carbonate precipitate. This carbonate can then be heated to produce a high purity gaseous CO2 stream, which also enables the regeneration of the sodium hydroxide. 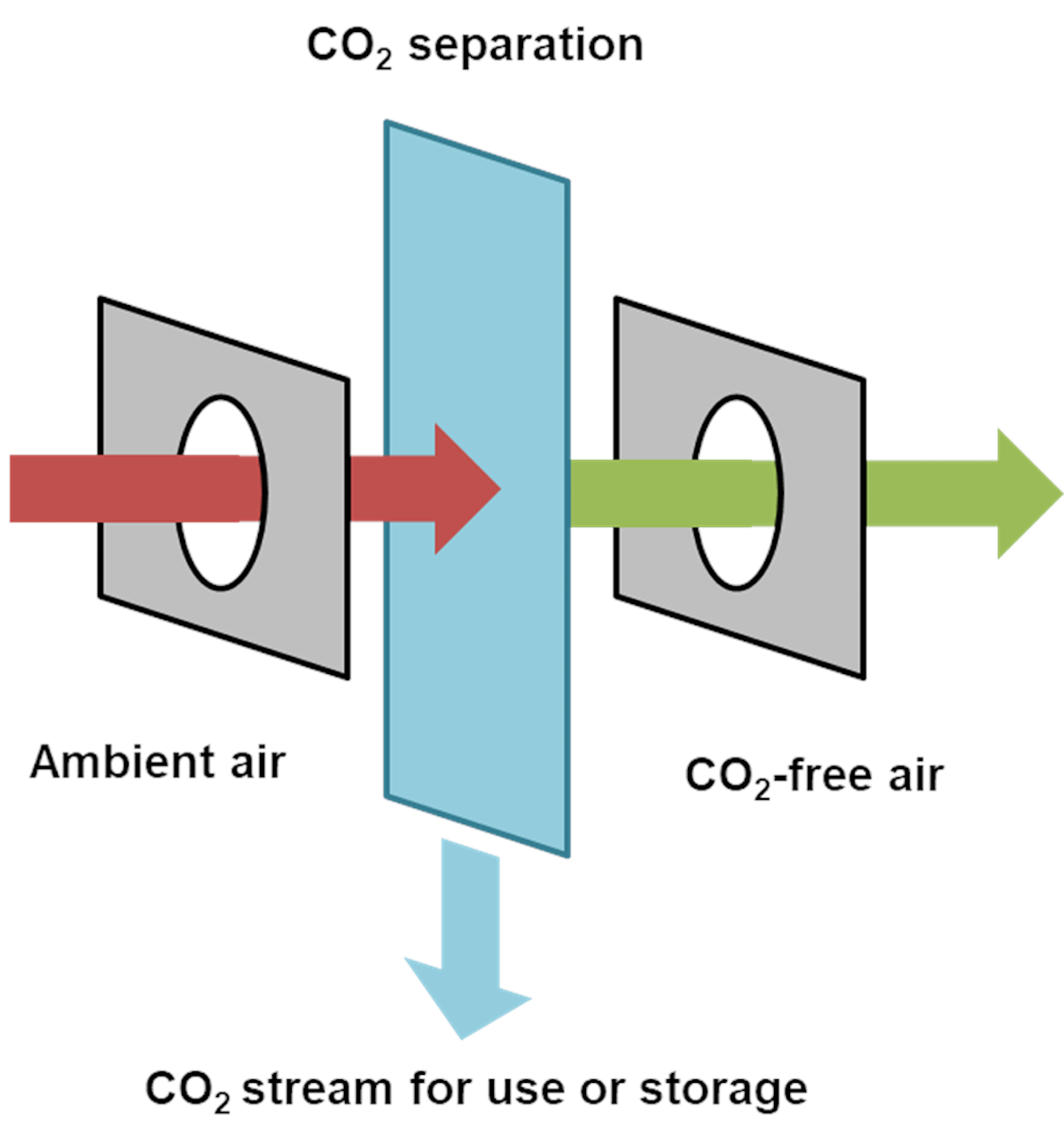 A generalized process for direct air capture. Source: IDTechEx
For CO2 separation, liquid solvents - usually amine-based or caustic - are commonly used to absorb the CO2 from the ambient air. Alternatively, solid sorbents can be used via a chemisorption mechanism, with heat and vacuum being used to desorb the CO2 and enable reuse of the sorbent. To date, the most successful processes for capturing CO2 from the ambient air are based on low-temperature solid sorbents and aqueous alkaline solutions.
Several companies around the world are working to commercialize DAC technology, with more and more start-ups being founded every year and investors putting hundreds of millions of dollars into the rapidly expanding field.
Arguably the most successful company in the field is Climeworks. Climeworks uses a low-temperature solid sorbent method based on amines supported by a cellulose mesh to capture atmospheric CO2 in an energy-efficient manner. The company uses a modular design for its "CO2 Collectors", which it claims reduces costs and supports scalability, and has 15 DAC systems in place across Europe, making it the largest DAC operator in the world.
Another fast-growing company in the field is Carbon Engineering, based in Squamish, British Columbia. Carbon Engineering is taking the opposite approach to Climeworks, aiming to construct a large-scale single facility in the Permian Basin capable of capturing 1 million tonnes of CO2 every year by 2023-2024. The company believes this large-scale approach will help access economies of scale and improve the commercial feasibility of the DAC process. Unlike Climeworks, Carbon Engineering uses a high-temperature aqueous method for capturing atmospheric CO2 based on potassium hydroxide. This method allows continuous capture of CO2, rather than separate capture and regeneration steps, although the energy required to regenerate the sorbent can be much higher. 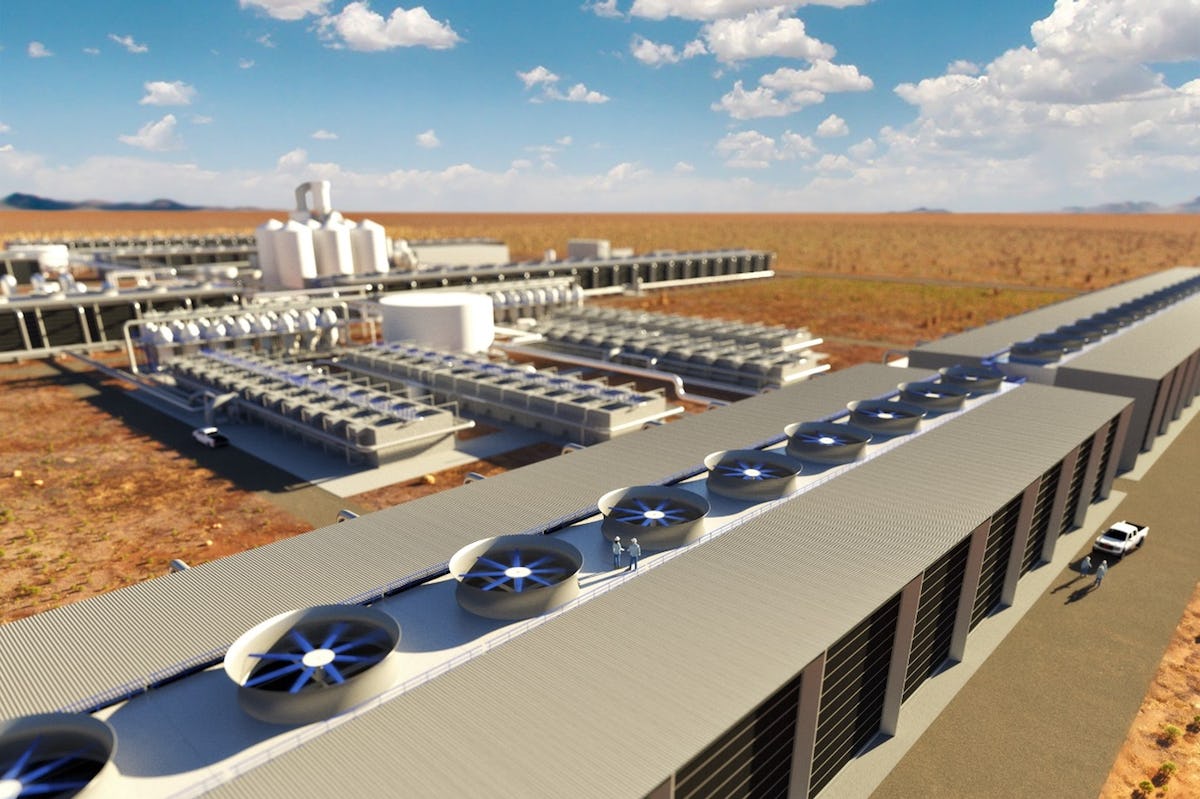 Carbon Engineering is partnering with Oxy Low Carbon Ventures to develop what will be the world's largest DAC plant, capable of removing one million tonnes of CO2 per year from the atmosphere. Source: Carbon Engineering
Beyond these two major players, several companies are innovating in DAC technology. Global Thermostat is aiming to reduce the costs of DAC through its porous, honeycomb ceramic "monoliths", which act as carbon sponges, while Prometheus Fuels is developing an electrochemical method for converting atmospheric CO2 into fuels using water, electricity, and carbon nanotube membranes. Other companies such as Infinitree and Skytree are developing innovative solutions for removing CO2 from the local atmosphere.
Despite the optimism around DAC, the technology still faces some serious hurdles before it can reach the scale where it has a meaningful impact on climate change. The main issue at the moment is the cost of the technology. Although DAC companies have remained fairly tight-lipped around their current process costs, capturing one tonne of CO2 directly from the atmosphere is believed to cost $600-$1,300 using current technology, compared with $40-$80 for capturing one tonne of CO2 from the flue gas stream of a coal-fired power plant.
Although some of these costs are related to the immaturity of the technology and can be expected to decrease in the coming years, it is unlikely they will ever be as low as point source capture costs. There is a relatively low amount of CO2 in the atmosphere (ca. 412 ppm compared with 150,000 ppm in point emission sources), meaning that stripping it is much more technically challenging and a process that fundamentally requires much more energy. A 2018 study from Carbon Engineering described how DAC costs could be reduced to $94-$232 per tonne, although the $94 figure was an optimistic outlook. The world is currently emitting over 30 billion tonnes of CO2 every year, so for DAC to have a meaningful impact on atmospheric CO2 levels, it could cost hundreds of billions of dollars in capture costs, not to mention the huge energy requirements for the process. Nevertheless, facing these costs may be unavoidable if the world is to mitigate the worst impacts of climate change. It will, however, require serious coordinated action from governments and industry alike.
The other major issue facing DAC is the limited time available for scale-up if it is to have a meaningful impact on atmospheric CO2 levels before it's too late to avoid the 2°C warming target set out by the Paris Agreement. All DAC technology currently deployed across the world can capture around 50,000 tonnes of CO2 every year, a tiny fraction of global emissions. The Carbon Engineering 1 million tonne per year plant, alongside other developments, will boost this by the middle of the decade, but it will still be a long way from being able to have a meaningful impact. IDTechEx forecasts that DAC capacity will reach 265 million tonnes of CO2 captured by 2030 and could reach 8% of global carbon capture capacity by 2040, but this will require major levels of investment and technology development. 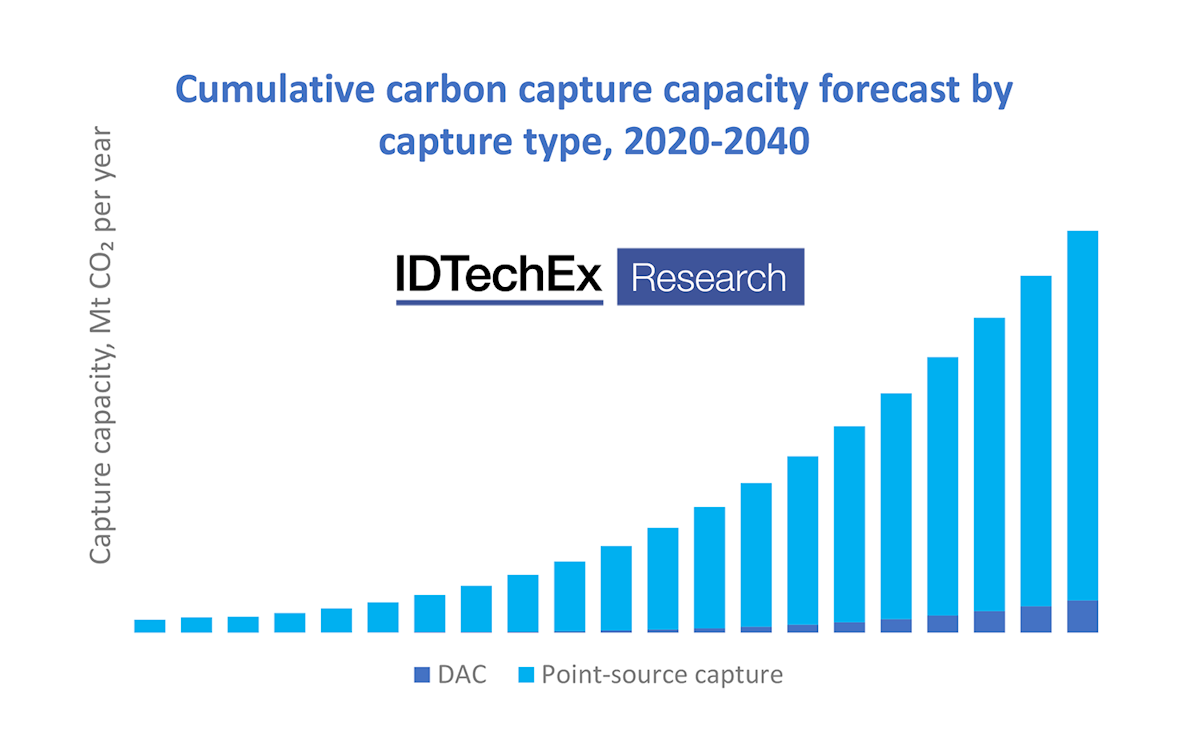 IDTechEx forecasts that DAC will gain a growing share of global CO2 capture capacity over the next few decades. Source: IDTechEx report "Carbon Capture, Utilization, and Storage 2021-2040"
Direct air capture is an exciting technology that has the potential to actively reverse decades of damage to the atmosphere from anthropogenic emissions. However, it is not a silver bullet and DAC alone will not be enough to avoid the worst impacts of climate change. Nor is the future potential of DAC enough to justify inaction over emissions now, in the hope that future technology will solve the problem. Nevertheless, as part of a coordinated system of carbon capture technology, negative emissions technologies, and emissions reduction strategies, DAC could play an important role in creating a sustainable future.
For a detailed technical and economic analysis of DAC technology, alongside point source carbon capture, carbon utilization and carbon storage methods, see the recent IDTechEx report, "Carbon Capture, Utilization, and Storage 2021-2040".
For more information on this report, please visit www.IDTechEx.com/CCUS, or for the full portfolio of Green Technology research available from IDTechEx please visit www.IDTechEx.com/Research/GreenTech.
IDTechEx guides your strategic business decisions through its Research, Subscription and Consultancy products, helping you profit from emerging technologies. For more information, contact research@IDTechEx.com or visit www.IDTechEx.com.
PrintForwardTweetLikePinredditShare
Previous
Next