May 07, 2020 Dr Michael Dent
Although the exact origin story of the COVID-19 outbreak is still uncertain, it is highly likely that the virus began as a zoonotic disease, i.e. an infectious disease caused by a pathogen that jumped from animals to humans. A dominant theory is that the new coronavirus was initially a disease affecting bats, before transiting to humans, possibly via an intermediary species such as the pangolin. Given the location of the initial outbreak, it is likely that the virus made the jump to humans at a wet market in the Chinese city of Wuhan, where wild animals including bats and pangolins are traded illegally. The biology of COVID-19 and the technologies used for diagnosis are explored in the recent IDTechEx report, "COVID-19 Diagnostics".
This is not the first time that live animal wet markets have been linked with zoonotic diseases. A 2004 Lancet paper linked wet markets with several disease outbreaks, including the SARS outbreak in China and the H5N1 bird flu virus that transmitted to and killed 6 of 18 people in Hong Kong in 1997.
The problem of wet markets and zoonoses is just part of the wider issue of zoonotic disease outbreaks linked with the global meat industry. Any system involving an extremely high density of animals in contact with human will lead to risks of disease transmission. This is particularly problematic in intensive animal farming systems, where there is often very little genetic diversity between animals, meaning a disease can rapidly spread without meeting any resistance from genetic variants.
A prominent example of this is influenza, a disease with a high potential to cause pandemics. There is a clear link between the emergence of avian influenza viruses and intensified poultry production systems. A 2018 research article reviewed 39 historical "conversion events", the conversion of a low pathogenic into a highly pathogenic avian flu virus, finding that all but two of them were reported in commercial poultry systems, with most taking place in high-income countries.
Unfortunately, in the coming years, zoonotic disease outbreaks are likely to become increasingly common. This will stem from animal agriculture intensifying as the world struggles to feed its burgeoning population and growing wealth in low income countries leads to increasing demand for meat.
So, what is the solution? Although a significant reduction in global meat demand would probably be extremely helpful in stemming the tide of zoonotic disease outbreaks, it may be difficult to achieve. Meat is involved in many cultural and religious practices and eating meat is an important part of many peoples' identities, acting as a symbol of food security and societal value around the world. As such, there is a large opportunity for any company that can create a completely realistic substitute for meat products.
Any substitute would need to be almost indistinguishable from conventional meat, have at least price parity with corresponding meat products, and be widely available. Two particularly promising industries have grown at a rapid pace over the past few years: plant-based and cultured meat. The recent IDTechEx report, "Plant-based and Cultured Meat 2020-2030", explores the technology and markets behind these rapidly emerging industries, forecasting whether either area could help reduce the world's reliance on the problematic animal agriculture industry.
In addition to often being more sustainable than meat, plant-based foods are much less likely to lead to disease outbreaks. Due to the much larger genetic differences between plants and humans than animals and humans, transmission of infectious diseases from plants to humans is much less likely. Plant-based meat substitutes have been around for a while, but have taken off in recent years, with companies such as Impossible Foods and Beyond Meat raising hundreds of million dollars in funding and experiencing a surge in sales.
The explosion in plant-based meat products is considered in more detail in "Plant-based and Cultured Meat 2020-2030", but can be broadly attributed to three factors.
The first, and arguably most important factor is quality. Rather than just targeting vegetarians, plant-based analogue producer like Beyond Meat and Impossible Foods are targeting the 95% of consumers who eat meat. These consumers are less likely to compromise on quality for ethical reasons than vegetarians. As such, there is a serious R&D focus on product quality and exact replication of meat, something not present in previous generations of meat substitutes. The second factor is in the increasing availability of plant-based meat products, with plant-based products becoming an increasingly common sight in fast food chains. Finally, consumer perceptions of plant-based meat are an important factor. Plant-based meats are viewed as healthy alternatives to meat products, letting consumers continue to enjoy their favourite foods guilt-free. There is a megatrend towards conscious consumption - consumers are increasingly demanding products be sustainable and ethical. 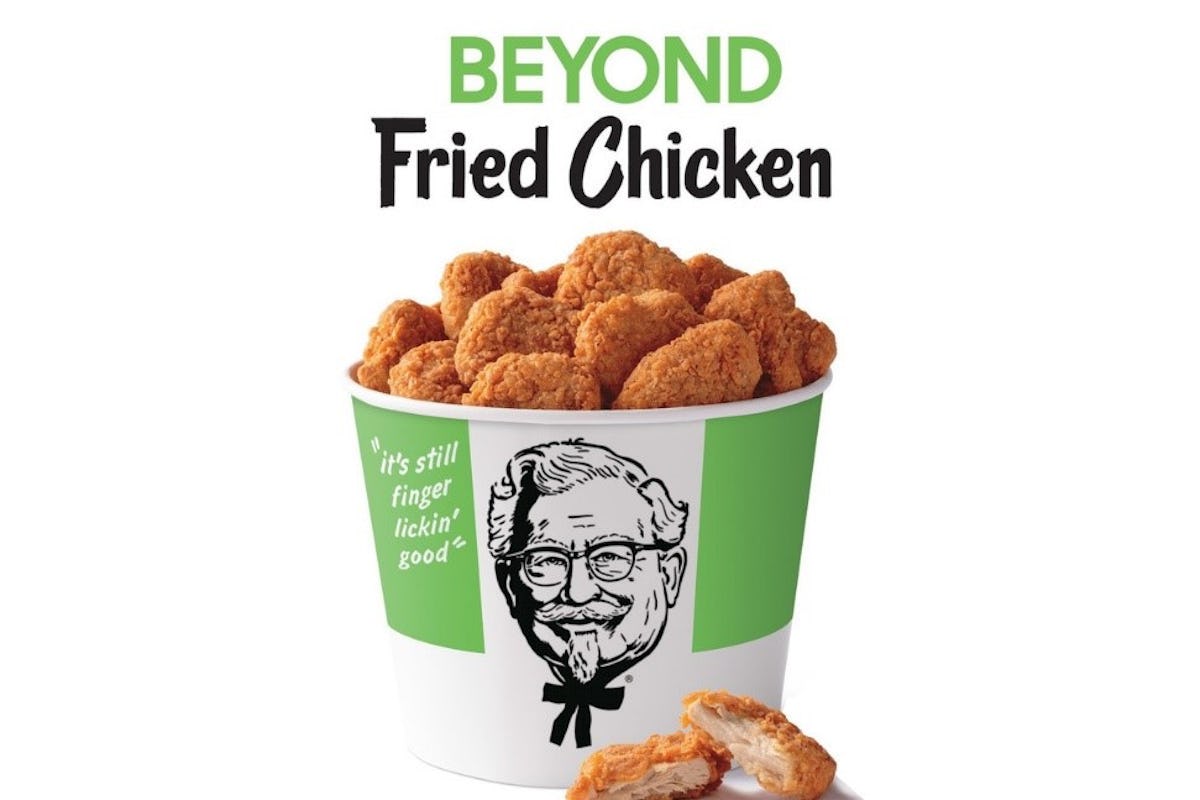 Plant-based meat has become a common site in fast food restaurants. When KFC trialled Beyond Meat's fried chicken analogue in Atlanta in 2019, it sold out in less than 5 hours (Image source: KFC).
A step beyond plant-based meat is the idea that animal cells can be cultured in a lab, allowing scientists to produce products completely indistinguishable from conventional meat, without requiring animal slaughter. Cultured meat, or "cultivated meat", has captured the world's imagination in recent years, with start-ups across the world racing to be the first to bring a cultured meat product to market.
In theory, cultured meat could solve many of the problems associated with the global meat industry. Growing cells in controlled facilities could significantly reduce the chances of disease transmission from meat production compared with the traditional animal agriculture industry, alongside various environmental and ethical benefits.
However, the industry is still in its infancy and there are many unanswered questions around cultured meat. Consumers are notoriously sceptical of biotechnology in food and the concept of lab-grown meat could be unnatural and unappealing. Additionally, although the technology for large scale is already established, it is currently extremely expensive, meaning a cultured burger could be hundreds of times more expensive than one obtained from a real cow. Finally, there is the issue of regulations. No regulatory regime in the world has yet approved a cultured meat product, and the approval process is likely to be arduous. Nevertheless, the industry is extremely optimistic that cell culture could soon replace animal slaughter as the world's main source of meat products. 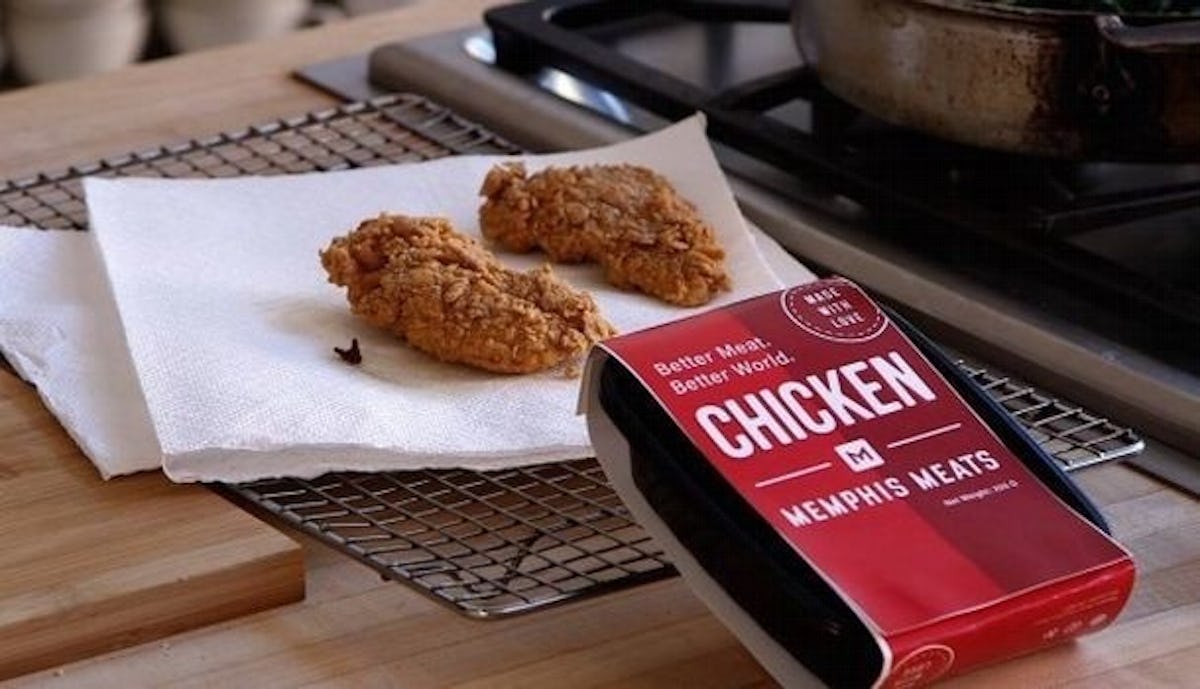 Chicken nuggets made from cultured chicken cells. (Image source: Memphis Meats)
Preventing further zoonotic outbreaks will be difficult and there is no single solution. However, both plant-based and cultured meat could be part of this overall solution, helping to reduce global demand for conventional meat products. Will either meat replacement capture significant market share from the meat industry in the next decade? Find out in the recent IDTechEx report, "Plant-based and Cultured Meat 2020-2030".
PrintForwardTweetLikePinredditShare
Previous
Next