Apr 11, 2022 Brendan Beh
IDTechEx has recently released "Diabetes Management Technologies 2022-2032: Markets, Players, and Forecasts", a market research report exploring the technical, regulatory, and market factors of the diabetes management device industry, which has seen major changes over the past decade. At the center is the shift from test strips toward minimally invasive continuous glucose monitors (CGMs). The billion-dollar test strip industry has been in decline since 2010, while CGMs have only continued to grow. By the year 2032, IDTechEx predicts the test strip industry to make up only 6.7% of the overall diabetes management device market, down from a peak of 63.4% in 2010. 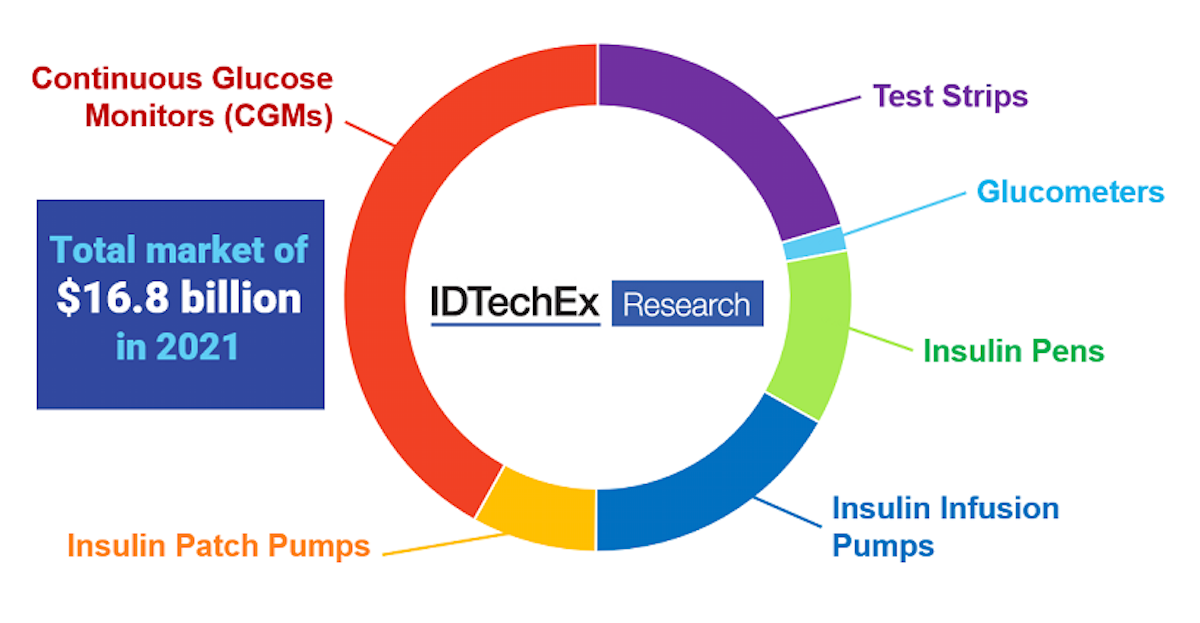 Diabetes management device industry 2021: Market shares of each device type. Source: IDTechEx - "Diabetes Management Technologies 2022-2032: Markets, Players, and Forecasts"
While CGMs have been a major focal point, much notable innovation has occurred across the breadth of the industry. This includes the rising prominence of insulin patch pumps and digital health initiatives, increasing automation of hybrid closed-loop systems in the path towards full closed-loop, and implementation of sensors into footwear for detection of foot ulcers, among many others.
In particular, the development of closed-loop systems has attracted much recent interest: these systems have the potential to fully automate the diabetes management process, thus improving patient outcomes. As such, the commercial launch of such a system could potentially expand a largely saturated insulin infusion pump market. This has seen a flurry of partnerships over the last few years between insulin pump makers such as Tandem Diabetes Care and Insulet with CGM leaders Abbott and Dexcom for the development of hybrid closed-loop systems. Within this report, we discuss the development and timelines for such possibilities, along with an analysis and forecast of the impact this would have on the insulin delivery industry over the next decade. The growing connectivity of management devices, such as the development of smart insulin pens, CGMs, and connected glucometers, have also paved the way for digital health to start expanding services within the diabetes management market.
The new report from IDTechEx, "Diabetes Management Technologies 2022-2032: Markets, Players, and Forecasts", examines the glucose sensor, digital health, and insulin delivery industries in detail. These include test strips, CGMs, non-invasive glucose monitors, insulin pens, insulin pumps, closed loop, and artificial pancreas systems, with the market outlook over the next 10 years for these being discussed. Other alternative insulin technologies, such as non-invasive insulin delivery systems and glucose-responsive insulin, are also considered. Additionally, innovations for the management of diabetes complications and other advanced therapies such as islet transplants are also investigated. This report analyses the technological and competitive landscapes, identifying and reviewing over 100 companies and research institutes ranging from industry leaders to start-ups. It identifies key players in each sector along with partnership ecosystems across several industries, along with the market outlook for each industry over the next 10 years. The report also includes several company profiles on both major players and start-ups across a range of industries, with many of these profiles including primary information obtained from high-level executives within each company.
The report includes many examples of products within each industry to help readers understand the current technological status. Technical details of products have been included within the report, with information obtained through a combination of primary and secondary research. Challenges to market development, such as regulatory and technology barriers, are introduced and discussed.
Finally, the report includes 10-year market forecasts for the future of the diabetes management device industry, with forecasts being produced for each industry separately. Considerations of major milestones such as the launch of full closed-loop systems and non-invasive glucose monitors are also included in the forecasts, along with discussions on methodology for each. Based on IDTechEx's technical and industry analysis, the market revenue of diabetes management devices is forecast to reach over $28 billion by 2032.
To find out more about IDTechEx's technical and commercial analysis of the diabetes management device industry, please see "Diabetes Management Technologies 2022-2032: Markets, Players, and Forecasts". This report falls within the IDTechEx healthcare research portfolio.
PrintForwardTweetLikePinredditShare
Previous
Next