Jan 31, 2013 Dr Peter Harrop
The hybrid and pure electric vehicle business will continue to prosper in 2013, with profits and growth the norm in most sectors. Laws will proliferate that make electric vehicles the only way to go. For example, more of the world's lakes will ban diesel engines. Harbours, city centres etc. will get tougher. It has long been illegal to have pollution-emitting vehicles banned indoors and even in some orchards. The market for pure electric indoor forklifts is largely saturated but the market for pure electric mobility vehicles for the disabled that inevitable have to go indoors is growing strongly. With the ageing of the population and the determination of the elderly and obese to stay mobile, they are now an impulse buy. Taiwan will cease to make 70% of global output of mobility vehicles for the disabled in 2013 as many others enter this business, with its record percentage profit.
Buying peace and quiet
2000 years ago, Julius Caesar banned vehicles from moving in Rome after the early evening. This was to reduce noise pollution and we increasingly see an echo of this in modern life. Examples are the new MAN hybrid trash truck that can work all-electric for brief periods to gather and compress trash during the night. It follows the earlier pure electric golf course mower from Textron that mows silently in the night without disturbing the neighbours. Pure electric aircraft were marketed by Pipistrel as long ago as 2002 and it remains a leader. They are now commercially available from Lange Aviation, PC Aero, Yuneec and others and there will be more models available in 2013. See the frequently updated report, "Electric Aircraft 2013-2023" (www.IDTechEx.com/evaircraft) from IDTechEx.
The Pascal Chretien pure electric helicopter that entered the Guinness Book of Records just over a year ago was followed by a German multicopter but neither are yet commercial, though the potential of pure electric Verticla takeoff and landing VTOL is huge. e-volo, the Karlsruhe-based company, made global aviation history just after Pascal Chretien by successfully operating the world's first manned flight by means of a purely electronically powered, multi-rotor vertical take-off aircraft, the VC1. e-volo and their partners will work on a project with 2 million euros of funding from the Federal Ministry of Economics and Technology to build the VC200, the first Volocopter in the world to carry two people. Following a huge growth in the market for toy electric helicopters, manned ones will become commercial within a few years and near silence will be a selling point.
Fig. 1 - VC200 two-man Volocopter

Source: e-volo
The military also value the near silence of electric vehicles, not just the relative lack of heat or gas signature and the military market for electric vehicles land, water and air is growing. See the IDTechEx report, "Electric Vehicles for Military, Police & Security 2012-2022" (www.IDTechEx.com/military).
Bus usage in the Netherlands increased 13% when electric versions were adopted, riders citing the lack of noise and vibration. Indeed, buses form a central part of the Chinese National Plan because they reduce noise and gas pollution and efficiently deal with congestion on roads. See the IDTechEx report, "Electric Buses and Taxis 2012-2022" (www.IDTechEx.com/evbuses). Expect silence to be more of a selling point in 2013.
Superior payback, less hassle
Buying electric vehicles primarily for payback is unusual but it is increasing. An electric golf car has long been cheaper to buy and use than an internal combustion one. For hilly golf courses the internal combustion version has remained because the tired old designs of golf car with lead acid batteries cannot cope but now that is solved with lithium-ion batteries or hybrids. Contrast outdoor forklifts where the hybrid pays back well on reduced maintenance, reduced fuel cost and longer life, the sharply reduced noise and pollution being a bonus. We are rapidly approaching the point where pure electric and hybrid electric buses have more superior cost of ownership, improving on the typically eight year payback in 2012. In future, more component and system suppliers will get behind the promising new and imaginative vehicle programs rather than queuing up like idiots to get designed into pure electric cars that will not sell. If we include the large number in China, there are now over 100 manufacturers of pure electric cars looking glumly at a near-empty orderbook. There will be a tipping point whwere sales of these will take off as price comes down and range increases but it will not be achieved in 2013.
More versatile, more acceptable
By contrast, the military is going electric with mission critical vehicles primarily because a planned 70% reduction in fuel requirements stops deployments being inhibited by fuel supply logistics. Boeing is making hundreds of airliners into electric vehicles when on the ground because this saves the airlines millions of dollars a year and they will be deployed in 2013. Kilowatts of electric power into the nosewheel replaces megawatts of inefficient, noisy and polluting jet engine power when taxiing. The recent fatal helicopter crash in the centre of London highlights the importance of the electric powertrain as a "parachute" providing controlled emergency landing, not sustained flight, in conventional helicopters: it will let it land in a more controlled fashion when the main system fails. This is being pursued by Eurocopter and separately by Pascal Chretien of in France who flew the world's first pure electric helicopter in 2011.
Fig. 2 - Millenworks Light Utility Vehicle in hybrid form 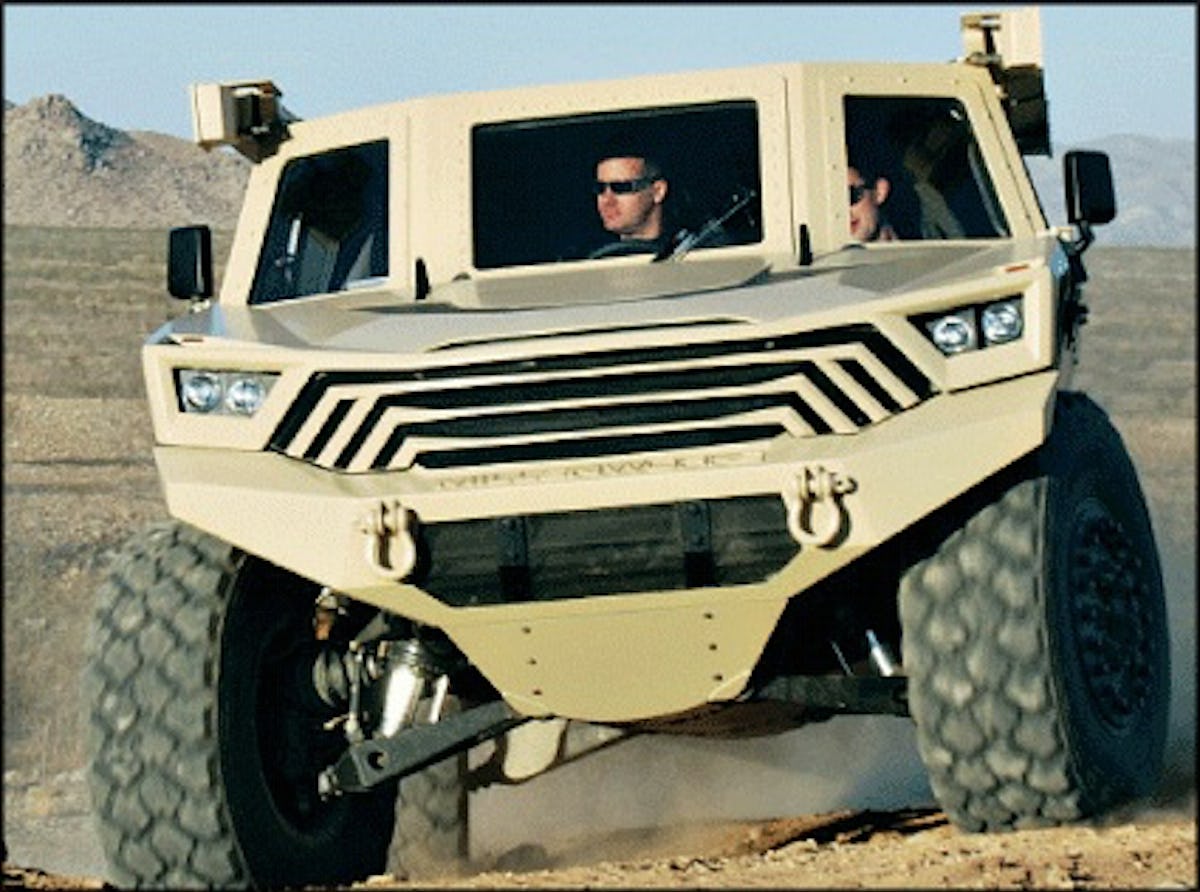 Source: IDTechEx
Bombardier, Polaris Industries, the Chinese and Indian e-bike industry and others will increasingly replace lead acid batteries in their leisure, and other small electric vehicles to make them more hassle free and reduce cost of ownership. Someone will develop a modern, common platform for golf, mining, leisure, military, microbus and other Jeep like electric vehicles, embarrassing the incumbents that do not modernise. This platform will be pure electric but, where appropriate, it will have a drop-in range extender as an optional extra. Sometimes this module, with its own fuel supply, will only act as the equivalent of a spare tyre. it will be a "get-you-home devices. See the IDTechEx report, "Range Extenders for Electric Vehicles 2012-2022" (www.IDTechEx.com/range).
IDTechEx reports
IDTechEx have published over 70 reports on Printed Electronics, Photovoltaics, Energy Harvesting, Energy Storage, Electric Vehicles, RFID and New Electronic Materials and Devices.
Visit www.IDTechEx.com/research for more information or contact us on research@IDTechEx.com.
PrintForwardTweetLikePinredditShare
Previous
Next