Haptics: Part 2 - After smartphones, what happens next?

Haptics: Part 2 - After smartphones, what happens next?

Sep 11, 2019 James Hayward
This is the second of a three-part series of articles on haptics. Haptics involves the use of technology to stimulate the sense of touch. IDTechEx have been covering the technology behind this important market sector for the last five years, and have just released their latest report: Haptics 2020-2030. See more information on the IDTechEx website or contact research@IDTechEx.com.
The last 10 years have undoubtedly been the decade of the smartphone. This individual product type grew from relative obscurity to be the dominant electronic device type across the world. Billions of units are now sold each year, with a majority of adults and many teenagers owning at least one device for an average of around 1-2 years at a time. This impressive growth has been a defining factor of the consumer technology markets of the last decade, and has allowed an entire value chain to develop and grow with the market.
However, the year-on-year growth rate in the sales of smartphones has been slowing since 2013, with annual sales volumes peaking in 2017, and falling slightly in 2018. Some analysts forecast that this will be but a temporary blip, with a potential return to growth in 2019 and/or 2020. Nonetheless, it is clear that the smartphone market has now reached a degree of saturation. This presents a clear challenge for all in the industry, including component makers that have seen their revenues grow with smartphone sales over the last decade. This applies very strongly to the market for haptic actuators, and is a prominent talking point in IDTechEx's latest report on the topic Haptics 2020-2030. 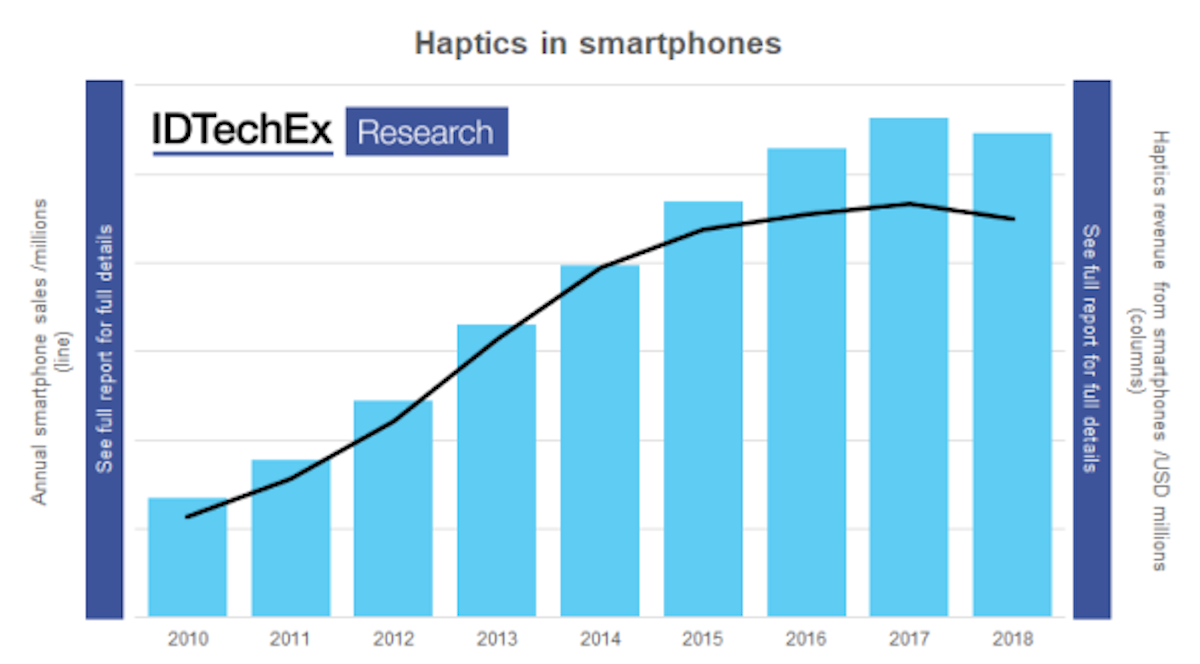 Smartphone sales volumes (line) correlate very closely with the annual revenue from haptics in smartphones (columns), but challenges arise as the growth slows. Source (image and data): IDTechEx
However, haptics revenue is not only about the sheer volume of devices sold, and the report has a strong focus on how technology in haptics is changing over time. In smartphones, there has been a specific switch towards the deployment of linear resonant actuators (LRAs) instead of ERM motors since 2015. It is interesting to note that these actuators are both typically larger (with limited device "real estate") and more expensive than the ERM motors that they replaced, but that the additional value from the haptic feedback provided was deemed to be worth the extra investment. A similar idea can be seen in newer gaming devices (notably the Nintendo Switch), which deployed LRAs instead of ERM motors in the "Joy-Con" controllers that came as part of this modular device, being the first major games console to make this switch.
The report looks at how the haptics market is changing both in terms of the number and types of devices containing haptics, but also how different haptics technology with additional features and value are also being introduced. This is reflected in the report chapters, looking first at each key type of haptics technology (electromagnetic (ERM motor, LRA, VCM, etc.), piezoelectric, electroactive polymer (EAP), shape memory alloy (SMA), plus case studies around surface haptics, contactless haptics, kinaesthetic haptics), and then across each of the most important haptics markets (smartphones, gaming, virtual reality (VR), wearables, other consumer electronics, automotive, other).
The next article in this series will look towards the future of haptics, considering the degree to which emerging haptics technologies can disrupt the status quo in the core sectors, and the amount which newer haptics technology ideas (from contactless haptics, to surface haptics and more) can develop as independent product sectors. For any questions regarding IDTechEx's report, wider research in the area or more general queries, please email research@IDTechEx.com.
Top image: Pixabay
PrintForwardTweetLikePinredditShare
Previous
Next