Oct 11, 2016 Ms Rachel Gordon
At this year's CEATEC, Japan's largest consumer electronics show, Honda showed an example of its so-called Micro Commuter electric car with a body that's been constructed using additive manufacturing.
The majority of the visual panels on the car were built using a Stratasys printer. They reportedly took over a month to produce, even when using the 3D printer 24/7. Speed is still one of the biggest hurdles to using 3D printing for production. Many of the panels had a rough surface that is characteristic of thermoplastic extrusion 3D printing, which still suffers from low resolution.
Honda was demonstrating its Variable Design platform. This marks an early stage in Honda's efforts to offer a heavily customizable electric vehicles. The automaker wants to offer a vehicle with a customizable layout where drivers can choose what they need. 3D printing will allow them to produce completely customised or short run parts economically, by reducing design times and tooling costs.
Honda are not the first to reveal vehicles with 3D printed parts, such as body panels, details and decorations. Local Motors have been designing and producing bespoke vehicles using 3D printing techniques for several years, including the Strati which was 3D printed during IMTS 2014.
It is unclear whether an entire vehicle composed of 3D printed parts would be strong and tough enough to pass safety regulations. However, Micro EVs are often not required to meet crash tests and other requirements of car homologation. Honda are using pipe-based skeleton under the panelling based on design and engineering from its motorcycle division. This is apparently what gives the "micro commuter model" structural integrity. This is the same idea as Divergent 3D, who use 3D printed nodes to connect aluminium pipes for the structure of their supercar, the Blade. 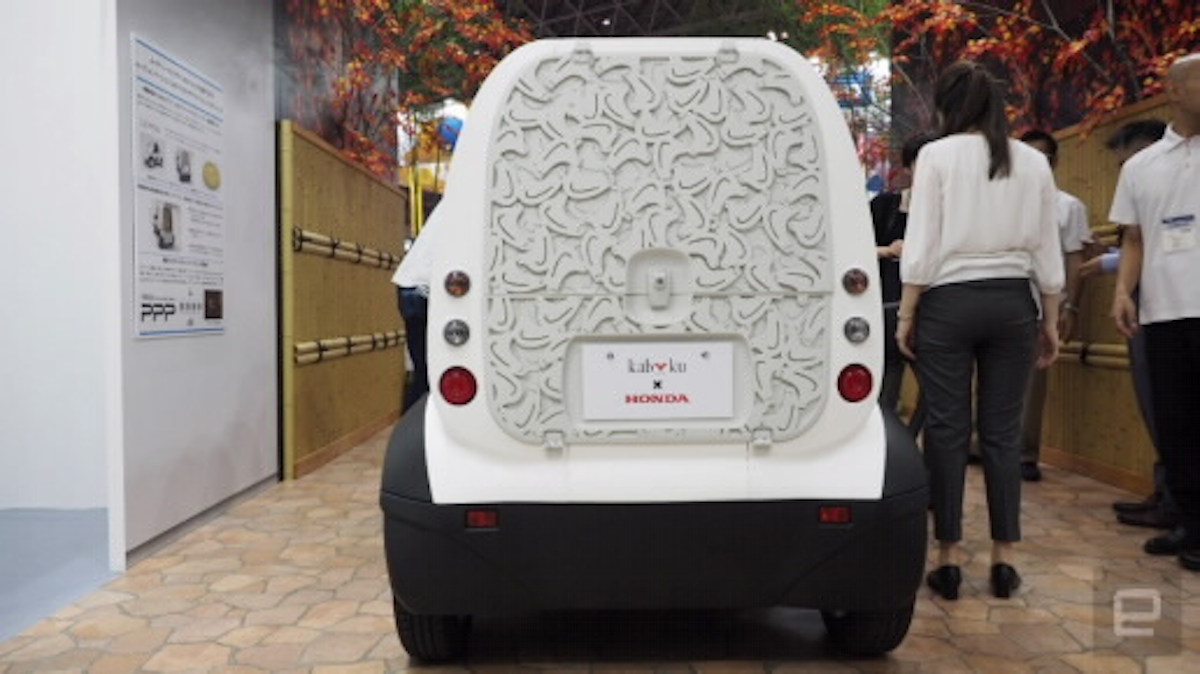 The vehicle on display at CEATEC was crafted for the Toshimaya cookie company. Toshimaya is known for its bird-shaped butter cookies, and so the design firm Kabuku added a cute bird design to both the hatchback trunk, as well as accents on the door and seat. The birds were integrated to create detailed motifs that would be difficult to produce without a 3D printer.
The car also has customised features like slide-out trays in the rear and tie-down spots to keep your boxes of delights from sliding around. Honda is saying this cookie car will start making deliveries this spring. 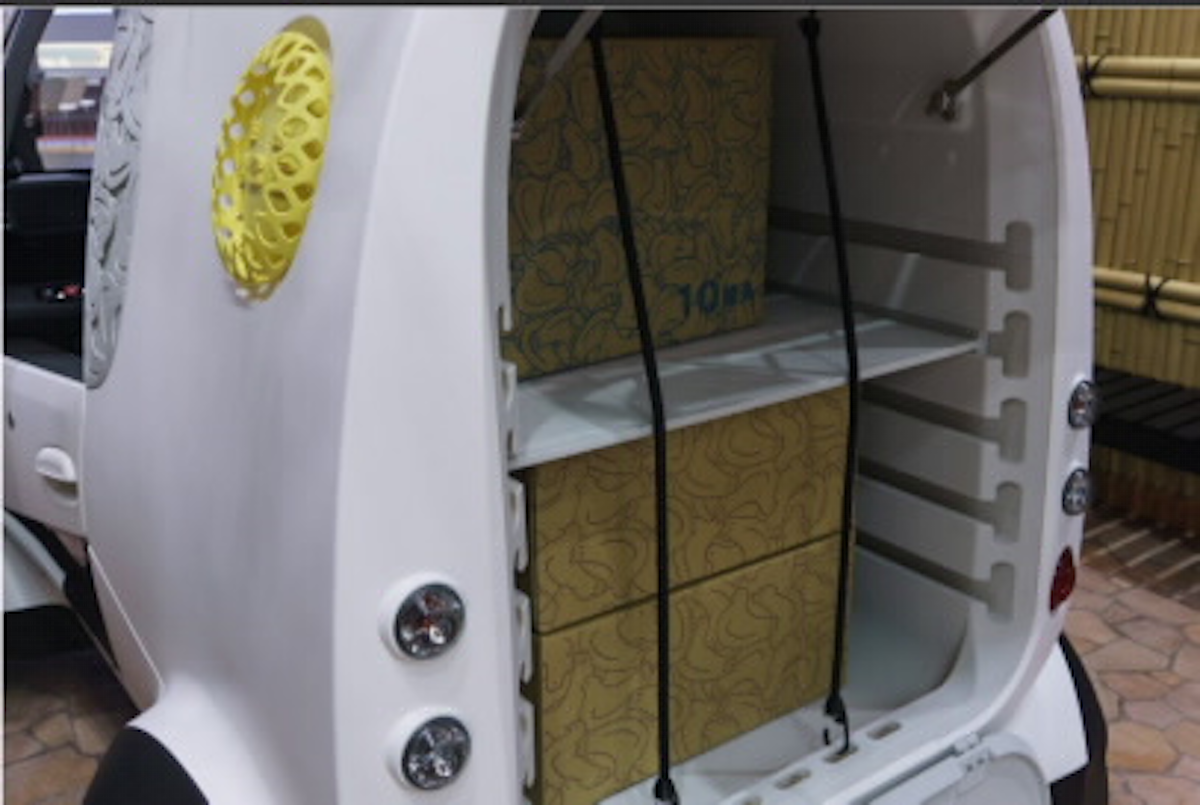 This is just one way to take advantage of the flexible platform offered by the Micro Commuter. Micro EVs are manned small vehicles that are uniquely significant in addressing megatrends and in pioneering energy independent, unlimited travel. Mobility vehicles for the disabled cope with the ageing of the population and the obesity. Micro EVs help people emerging nations be mobile but prevent air pollution. Honda's other examples included a vehicle for a roasting company, which has a removable coffee cart at the rear, and one for a fish delivery company that is shaped to look like a fish.
In these petite cars, space and weight is at a premium. The Micro Commuter itself has a maximum range of about 80 kilometers, or about 50 miles. It contains three separate battery packs, which can be removed for charging. The largest is built into the floor of the car, but about 10 miles of range is provided by a pair of packs that slot in next to the only seat. This is another example of the increasing trend towards Structural Electronics.
PrintForwardTweetLikePinredditShare
Previous
Next