Oct 26, 2022 Dr Isabel Al-Dhahir
IDTechEx Asks if Thin Film PV Is an Answer to Today's Energy Threats
Thin film photovoltaics (PV) currently comprises a relatively small proportion of the total photovoltaics market yet offers extensive opportunities for applying solar power in new applications. The simplicity in design, the ease of manufacturing, and the cost-competitiveness with conventional silicon photovoltaics make it exceptionally well-suited to both high-volume manufacturing and regional manufacturing. The variety of thin film PV technologies, including perovskite, dye-sensitized, organic, cadmium telluride, and copper indium gallium selenide, and their potential for a wide selection of promising applications is assessed in IDTechEx's latest report, "Thin Film Photovoltaics 2023-2033". 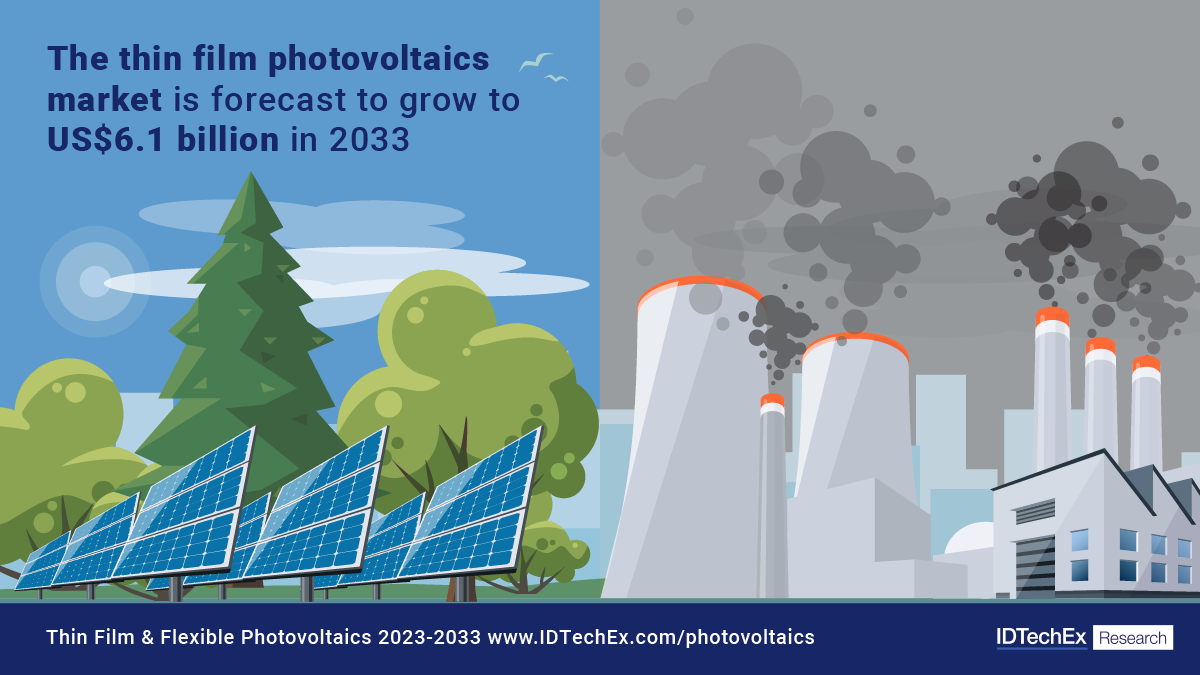 The thin film photovoltaics market is forecast to grow to US$6.1 billion in 2033. Source: IDTechEx.
Cadmium Telluride: A Success Story for Thin Film Utility Scale PV
In this decade alone, climate disasters, political hostilities, and pandemics have brought to light the magnitude of threats facing energy security. As Europe re-opens its coal power plants, a bitter realization dawns that greater and earlier investment into renewable energy could have spared a dilemma affecting the lives of hundreds of millions of people.
Photovoltaics is the fastest-growing energy source. Of the thin film PV technologies, cadmium telluride (CdTe) dominates. It is largely concentrated within the US, where it accounts for 40 % of US utility-scale PV power. In recent years, the commercial efficiency of CdTe panels has been playing a catch-up game with conventional silicon and is currently trailing by ~3 %. Efficiency, however, is not the only deciding factor. From the perspective of the US, CdTe PV enables independence from the Asia Pacific region that has an iron grip over conventional silicon technology.
In recent years, polysilicon supply shortages and trade war tariffs have seen the closure of several American PV developers sourcing silicon from China. The CdTe industry, centered in the US, has remained immune from such market fluctuations and political tensions.
Will Cadmium Telluride's Share of the Market Increase?
In addition to utility-scale PV, cadmium telluride PV is also set to break into the previously unexplored rooftop market. IDTechEx insight into the industry indicates that this will largely be targeted at the US market. Although delivering a slightly lower power density than silicon panels, CdTe could trump the incumbent technology for many consumers where aesthetics are a strong priority.
Readers may wonder, given the success in the US, why CdTe has not made headwind in Europe and the rest of the world. The answer lies in the use of tellurium, a material so rare that there is not enough of it available to produce CdTe in high volume. CdTe manufacturers have found a solution to this shortage: to recover deployed panels at end of life and recycle the tellurium for use in future panels.
The success of this hinges on strong co-ordination between the original manufacturers, customers, and intermediaries. There is also a requirement for patience as deployed CdTe panels are in operation ~25 years before they can be recovered at end of life. Following their analysis of the CdTe market and competitive alternatives, IDTechEx expects that CdTe will remain concentrated within the US for the foreseeable future. Eventually, if the newly instated recycling schemes prove effective, there could be instalment of CdTe in other parts of the world.
Outlook
The silicon photovoltaics industry is worth hundreds of billions with firmly established roots in the Asia Pacific region. Reinventing the silicon industry is hard work, and cost-competitive production of
silicon is unlikely to appear soon in the likes of Europe and the US. On the other hand, the thin film solar landscape grants a clean slate to work with that could make sprawling supply chains and energy dependency a thing of the past.
To discover more about how thin-film PV, including CdTe, perovskite, organic, dye-sensitized, gallium arsenide, amorphous silicon, and copper indium gallium selenide can impact the energy sector, visit "Thin Film Photovoltaics 2023-2033". The report includes multiple company profiles based on interviews with major players across the different thin film technology types. IDTechEx develop 10-year market forecasts for each technology and application sector, delineated by both revenue and installation capacity. The report also identifies the key challenges, competition, and innovation opportunities facing thin film PV. Technical analysis and emerging trends are based on cutting-edge research and primary information with key and emerging players.
For more information on this report, please visit www.IDTechEx.com/Photovoltaics, or for the full portfolio of research available from IDTechEx please visit www.IDTechEx.com.
PrintForwardTweetLikePinredditShare
Previous
Next