IDTechEx Research: 5G is coming, what to expect and why

IDTechEx Research: 5G is coming, what to expect and why

Aug 01, 2018 Dr Luyun Jiang
5th-Generation Wireless Systems (5G), says the optimist, will revolutionize our life as the 3G/4G systems did. While the majority are still waiting to link to the 4G network, the top telecoms have started the war for the next generation of mobile communication. 5G is expected to finally bring the autonomous car, VR and Internet of Things to reality and make science fiction come true.
So why are people so keen on 5G? Early efforts on 5G have been driven and centred around three main features (as summarised in figure 1).
4G is not the only competitor for 5G. There are a number of new connection technologies, such as NB-IoT, LoRa and Sigfox which also offer solutions to the emerging market of IoT (for more details read the IDTechEx Research report IoT Low Power Wireless Networks and 5G 2019-2029: Global Forecasts, Technologies, Applications). With high throughput and low latency, 5G is the most promising technique to tackle the high-value areas including 3D robotic control, virtual reality monitoring and remote medical control. Those are the problems that today's technologies have not addressed yet.
Figure 1: 5G use cases for three main segments 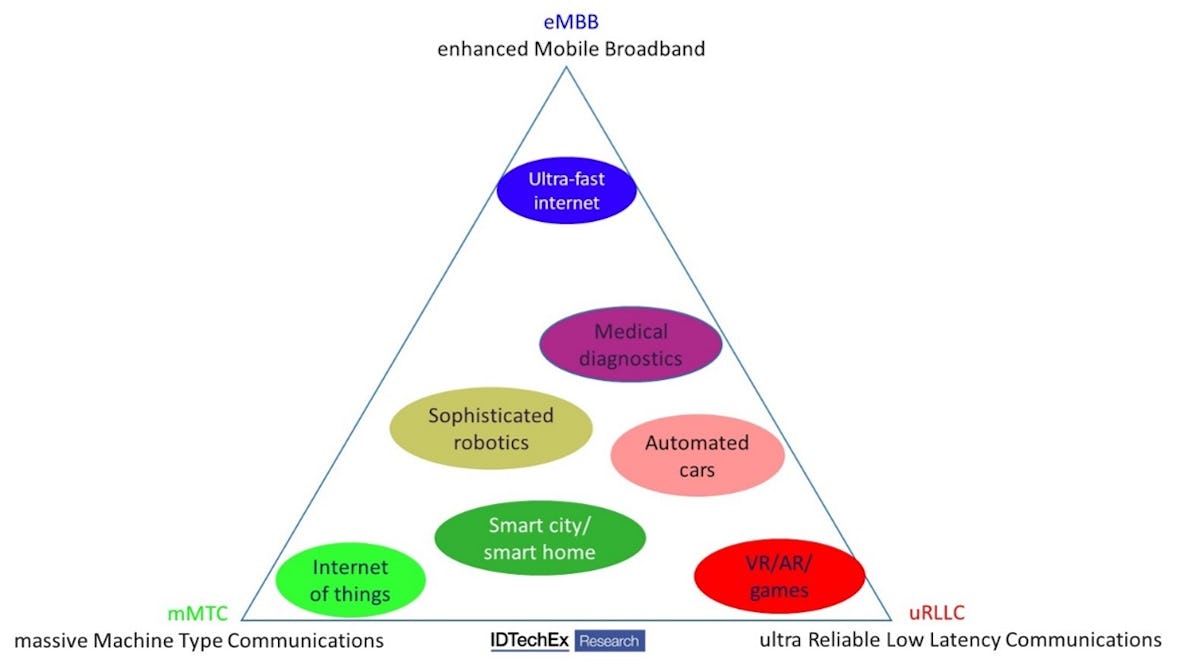 Source: IDTechEx Research
The evolution of mobile communication is never about swiping away the old directly, but always progressive. For example, some scheduling algorithms and concepts from 3G are inherited and manipulated in 4G. It took two years from the completion of the 4G standards (2008) to its commercialization (2010), and another three years to take over 3G. However, even now, 4G reach is not absolute yet. We expect a similar path for 5G.
5G is never intended to overthrow 4G at all, at least for the moment. In fact, many of the essential techniques are updated versions of 4G. Figure 2 shows some new techniques at the physical layer used both for 4G and 5G, while the latest technologies are only available for 5G. The 4G station will continue to be used for 5G as the macro base station, and the main infrastructure of 4G will remain. Such a 5G network supported by existing 4G infrastructure is also called Non-Standalone (NSA) 5G, which will be first adopted in market.
Figure 2: the new technologies for 5G at physical level 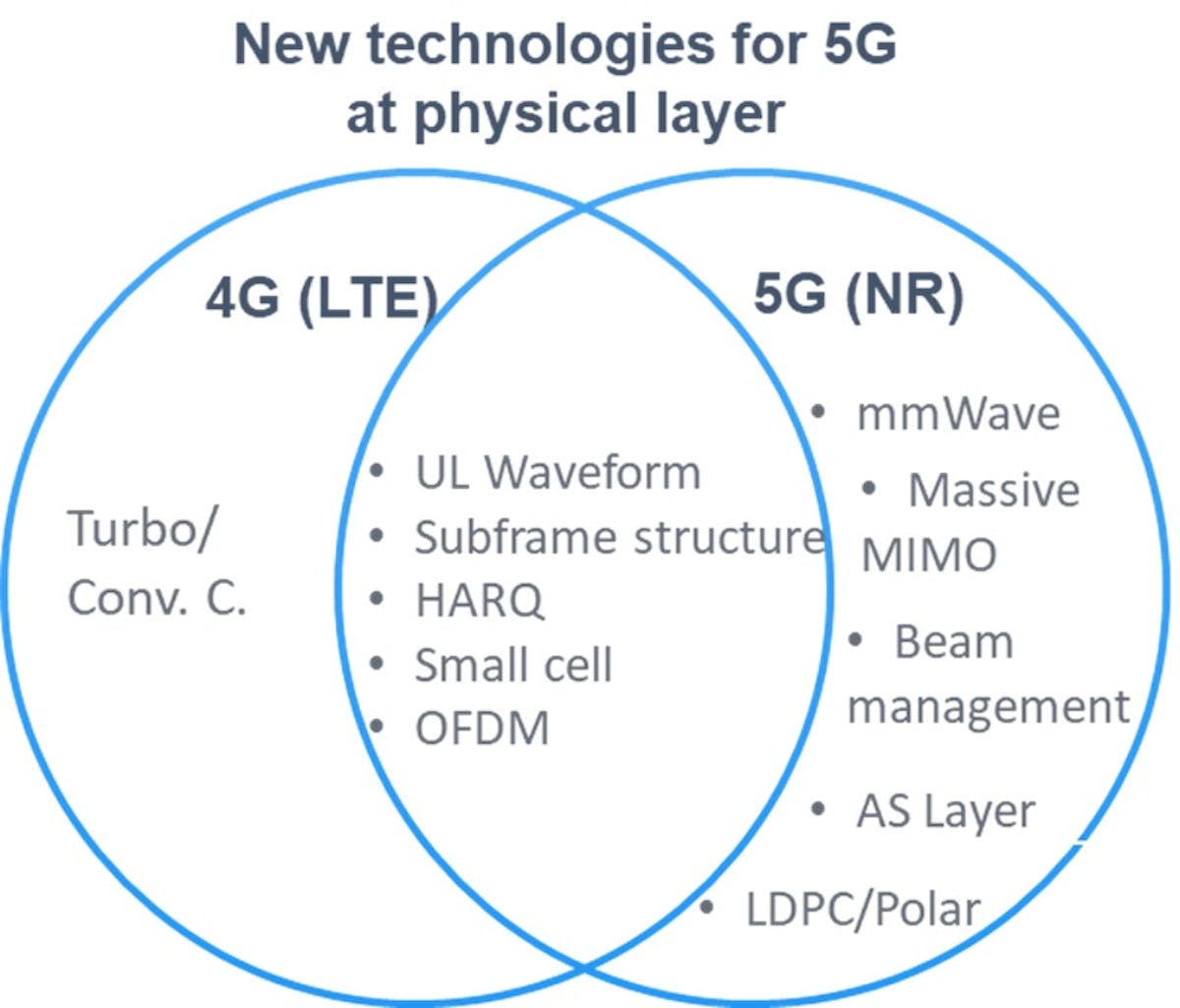 Source: IDTechEx Research
5G is a collection of optimised 4G techniques (both at physical level and architecture) and new characteristics coming from the change of frequency (mainly two high frequencies, sub-6GHz or 20-40 GHz) and large bandwidth. Figure 3 summarizes the relationship between some essential techniques and the key features. The most popular innovations include:
Figure 3: the relationship of essential 5G techniques (in yellow) and key features (in blue). The blue arrows show the direct links between the technique the resulted feature, while the red arrows represent the connections between two technologies.

Source: IDTechEx Research
However, IDTechEx Research finds that there is also a growing pessimism on the widespread adoption of 5G, coming from many policy makers and telecoms companies, such as surprisingly, Huawei, one of the leading 5G standard contributors. They argued that 5G will become incredibly expensive for operators to deploy, requiring tens of thousands of new base stations per country and enormous investment in the structures upgrade. Some claim that most consumers would not notice its benefits and that operators would struggle to make money from it. There are questions mingling around. Why do we want to deploy 5G while 4G is not yet fully covered? Will there be enough reliable 5G coverage or just in a few areas, limiting some benefits to certain locations? Is it actually any good for IoT based on power requirements versus the other types, which may also have a lower data cost plan due to their cheaper infrastructure? The future of 5G is still far from certainty.
For all revolutionary technologies, we can never fully predict what they will bring to us and how they will change our lives until they have already done so. Despite all the challenges, the standardization of 5G has moved quickly. 3GPP is expected to approve the first release of all the necessary standards for 5G by the end of this year, and first commercialized deployment might come very soon afterwards. There is no doubt that 5G is coming.
US and China are the main countries to push the standard, conduct vast trials, while Europe also start to act activity. IDTechEx summarises the updated and most important features and trials in 5G in the new report IoT Low Power Wireless Networks and 5G 2019-2029: Global Forecasts, Technologies, Applications.
Learn more about 5G and Low power Wide Area Networks at Internet of Things Applications Conference and Exhibition, hosted by IDTechEx, on Nov 14-15 at Santa Clara, CA. For more details see www.IoTUSA.tech