IoT: Real Growth Despite the Smoke and Mirrors

IoT: Real Growth Despite the Smoke and Mirrors

Jul 12, 2018 Raghu Das
Low Power Wide Area Networks (LPWAN) for the Internet of Things have developed in multiple ways. On one hand you have the low power, unlicensed spectrum communication technologies, some of which are highly proprietary and focussed on a particular application; while on the other hand large telecoms companies have added low power communication capabilities as an extension of their cellular network (licensed spectrum), with those standards now wrapped up in the 5G effort.
For both unlicensed and licensed spectrum technologies there are many options available with different governments and territories pushing different types. For example, the Chinese Government is heavily supporting a licensed spectrum technology, NB-IoT, even citing a target of having 600 million connections in 2020. In other countries the type of licensed spectrum protocol being put in place is in part chosen based on the IP strengths of the network providers in those areas. Many talk of progressing multiple network choices for customers, but in reality one choice is being deployed before the others.
Then there is the consideration of the 'smoke and mirror' marketing of all these choices, with inconsistent and often inflated numbers of connections loosely given. This is due to each of the proponents being acutely aware that they need to be seen as the communication protocol of choice before potential adopters sniff loss of confidence and momentum, leading to an inevitable shake-out of some of these options. As a result the numbers of connections vary widely, with an executive from Huawei signalling up to 150 million NB-IoT connections in 2018 (IDTechEx Research finds less than that figure), to others such as Sigfox announcing their 3 millionth connection this year, less than the industry had eluded to. Despite the target set by the Chinese government for NB-IoT connections, the detail when one looks into actual deployments in smart cities and elsewhere shows projects in utilities of, at rollout level, a few hundred thousand per project in 2018.
It is against this hype that IDTechEx Research has conducted its impartial study of LPWAN and related technologies - including wireless local area networks and 5G as comparisons. Based on primary research consisting iof interviews with key players, the report IoT Low Power Wireless Networks and 5G 2019-2029 provides a current and forecast data set of LPWAN protocols over 2018-2029 and forecasts of adoption by application for the same period.
2018 Total Connections for LPWAN (excludes 2G, 3G and 4G) 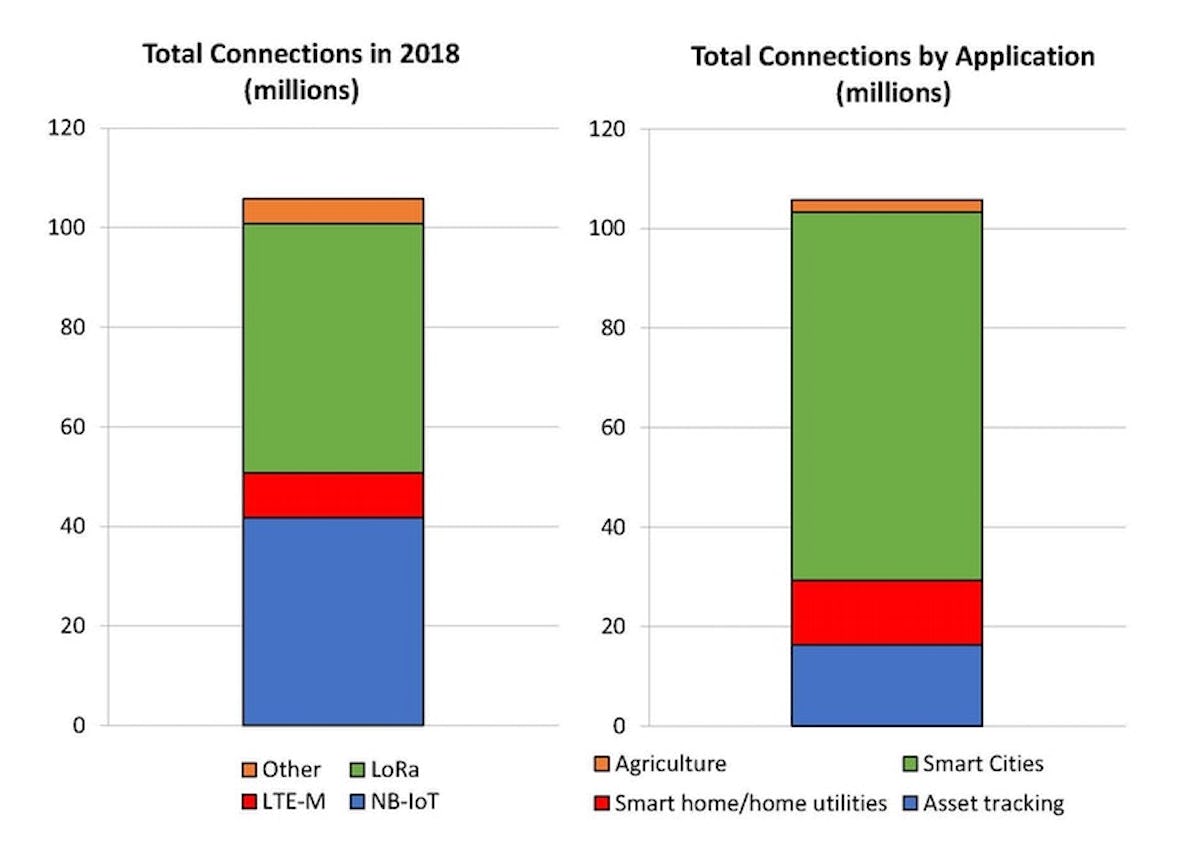 Source: IDTechEx Research report IoT Low Power Wireless Networks and 5G 2019-2029
The driving force for LPWAN connections are smart city applications - a loose term comprising of many projects but the key short term successes are utility monitoring, street lighting, car parking and pollution and people monitoring. In some countries the government decides which communication protocol to use and suppliers focus on those. In other applications, the winning integrators will be those with strong vertical knowledge into the problems of particular industries and they will choose the best technology solution for the problem, such as for asset tracking and agriculture. These will sustain niche but reasonably sized opportunities for organizations.
By volume, licensed communication technologies such as NB-IoT and LTE will have more connections than unlicensed versions (such as LoRa and Sigfox) by 2021, despite entering the sector later. However they will not, at least in the medium term, be the cheapest or lowest power.
Based on a global assessment, with particular focus on China, IDTechEx Research has developed forecasts by both application type and communication type for LPWAN choices for 2018-2029.
The key takeaways benefits of the research in this report are:
• Current year and forecasts by communication protocol type, for NB-IoT, LTE-M, LoRa and other unlicensed spectrum protocols for 2018-2029
• Current year and forecasts by application type, including smart cities, asset tracking, smart home and agriculture for 2018-2029
• Comparison of low power wide area networks, 5G and low power wireless networks - technologies, costs, players, politics and government support
• Case studies and progress of adoption for each communication type
• Assessment of each communication type by application
For full details see www.IDTechEx.com/low.
PrintForwardTweetLikePinredditShare
Previous
Next