Oct 26, 2017 Dr Khasha Ghaffarzadeh
ITO and ITO alternative have, in recent years, faced challenging market conditions. Sluggish growth, together with increased supply and the threat of substitutes, led to price falls, even price wars, forcing an industry consolidation. Many emerging applications undershot industry expectations, particularly affecting alternative suppliers who had counted on them opening the space for them. Within the alternatives, after more than a decade of commercialization, the best performing solutions became known, positioning themselves as sustaining technologies. Other alternatives looked to exploit non-standard features such as stretchability or formability, targeting, for example, emerging 3D touch surface applications.
Now, the industry is asking itself, what comes next? Will it remain trapped in this stagnant low-margin business where competition is rife? Our report "Transparent Conductive Films (TCF) 2017-2027: Forecasts, Markets, Technologies" finds that the short-term prospects are very much business as usual. However, the long-term prospects are promising, with the transparent conductive film (TCF) industry set to experience a second major growth phase. This transition will start, slowly, from 2019 onwards.
Our market forecasts are shown below. Here, the market size for each application is normalized w.r.t. its 2015 value. Observe the short term stagnation but the long term growth. This is perhaps better demonstrated in the inset. It shows the percentage of the market captured by today's dominant applications (i.e., mobile phone, tablet and notebook touch screens). Note how these markets will see their total dominance diminish over the coming decade. Refer to "Transparent Conductive Films (TCF) 2017-2027: Forecasts, Markets, Technologies" for more information.
Here, in this article, we briefly describe the major changes that underpin our growth forecasts. In particular, we will examine how large area capacitive touch surfaces will create demand whilst some currently nascent applications will fail to register substantial growth. In our report "Transparent Conductive Films (TCF) 2017-2027: Forecasts, Markets, Technologies", we provide a more detailed analysis, assessing all the different existing and emerging technologies and applications, providing ten-year market forecasts segmented by technology and application and detailed interview-based company profiles. 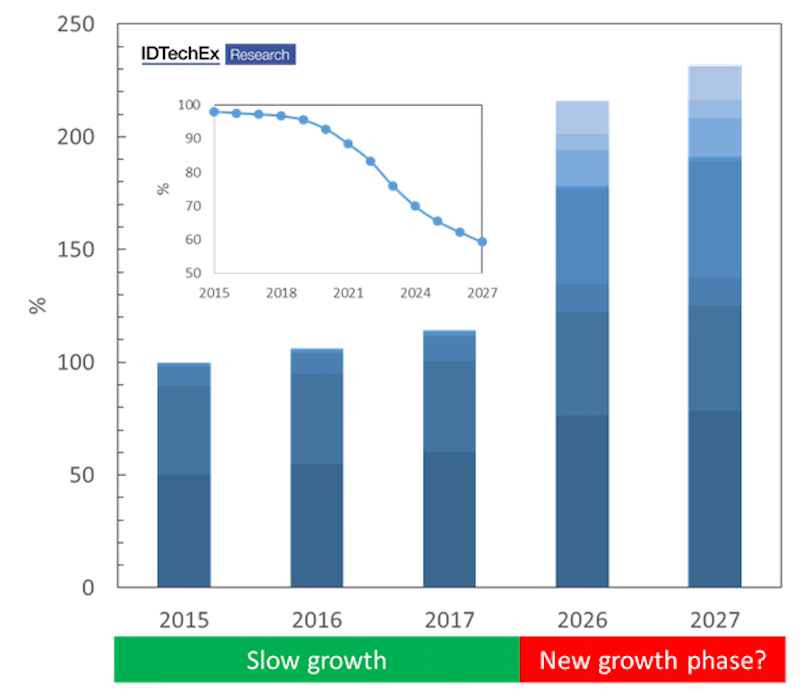