Aug 12, 2019 Luke Gear
Since 2013, the global residential energy storage market has been dominated by Germany, but the country may be dethroned soon as promising new residential energy storage markets gather momentum.
Why has Germany been the champion so far? Since 2013, its market has been underpinned by Europe's largest energy storage subsidy, which was made available by KfW national bank for energy storage paired with solar systems.
The subsidy started out at 30% of the capex of the solar system and was gradually stepped down to 10% during the final year of the program.
By the time things ended on December 31, 2018, the market had grown from nothing to over 125,000 systems.
However, as detailed in the new IDTechEx report Batteries for Stationary Energy Storage 2019 - 2029, consumers were gradually weaned off the subsidy thanks to falling battery prices and a less attractive handout after the step-downs.
Indeed, while in 2015 roughly 55% of the market relied on KfW's subsidy, in 2018 this fraction was close to 4%, according to data from RWTH Aachen University.
Moving forward, feed-in-tariff (FiT) phaseouts will become the big new driver as consumers look to replace lost revenue streams from their solar systems.
Other countries are following in Germany's footsteps. Australia has similar ingredients to Germany: a wave of local policy support and renewables/storage targets in five of the six Australian states, as well as expiring FiTs.
The country emerged with promise in 2017 and cemented its position as a serious contender in 2018, although it is difficult to accurately predict deployment. Indeed, yearly installation estimates vary widely between 30,000 and 100,000 systems in 2018, up from around 20,000 in 2017.
In California, installations are also taking-off, as shown in the chart below. The benefits of the 'Self-Generation Incentive Program' (SGIP) budget specifically set aside for the residential segment in 2017 are quickly being realised. LG Chem also entered the market in 2017, and priced competitively with the Tesla Powerwall, has helped to meet the surge in demand in 2018. 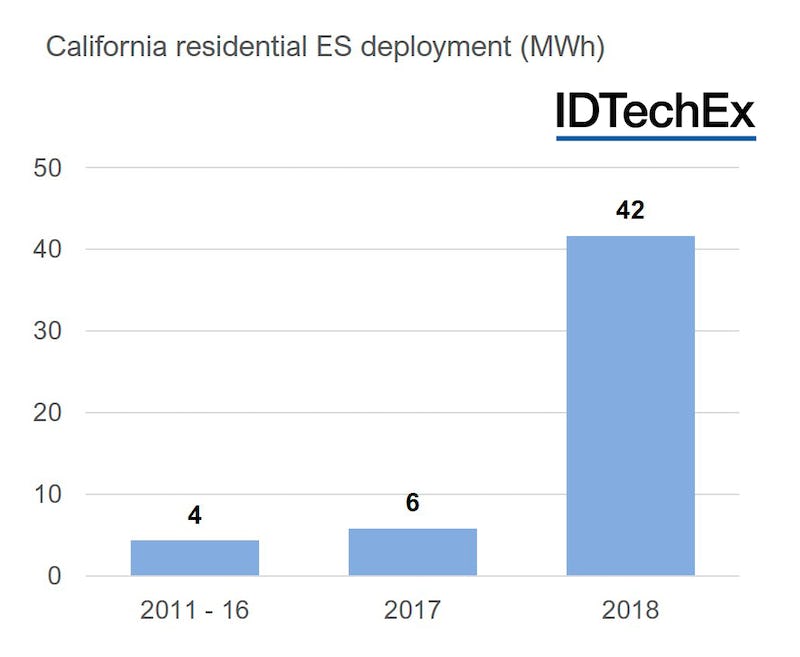 Residential energy storage installations in California. Data source: California SGIP Program, IDTechEx in Batteries for Stationary Energy Storage 2019-2029
More details can be found in the new IDTechEx research report 'Batteries for Stationary Energy Storage 2019-2029' -- www.IDTechEx.com/stationary
Based on a global assessment, IDTechEx Research has developed forecasts by segment and region for 2019-2029.
The key takeaways/benefits of the research in this report are:
Top image: Pika Energy
PrintForwardTweetLikePinredditShare
Previous
Next