The future of wearables is medical (Part 1)

The future of wearables is medical (Part 1)

Sep 10, 2019 James Hayward
Wearable technology and medical devices have many prominent synergies. Electronic devices on the body are perfectly placed for sensors to collect data relevant to healthcare, with communication options allowing them to be the gateway to digital health data. Common sensor options within wearable devices include options for motion (e.g. for fall detection or activity characterisation), heart rate monitoring (for various cardiac metrics), through to other less common options such as determining body temperature, detecting specific chemical analytes or assessing physiological responses to specific stimuli. Wearables can also play their part in the other half of a feedback loop; whether this be in delivering insulin to a type 1 diabetic, alerting the user at appropriate times to take medication, or directly applying treatment such as electrical stimulation.
IDTechEx's most recent report on the industry includes historic data and 10 year market forecasts for 48 different wearable technology product types, of which 20 are types of wearable medical device. These include more traditional medical products such as hearing aids, cardiac devices (e.g. Holter monitors or event monitors) and insulin pumps, but also newer devices such as continuous glucose monitors (CGM) for diabetics, other new electronic skin patches, and other emerging wearable medical device prospects. These products increased their combined annual revenue by $10bn a year in the period from 2010 to 2019, and make up around a third of all of the wearable device revenue in 2019. 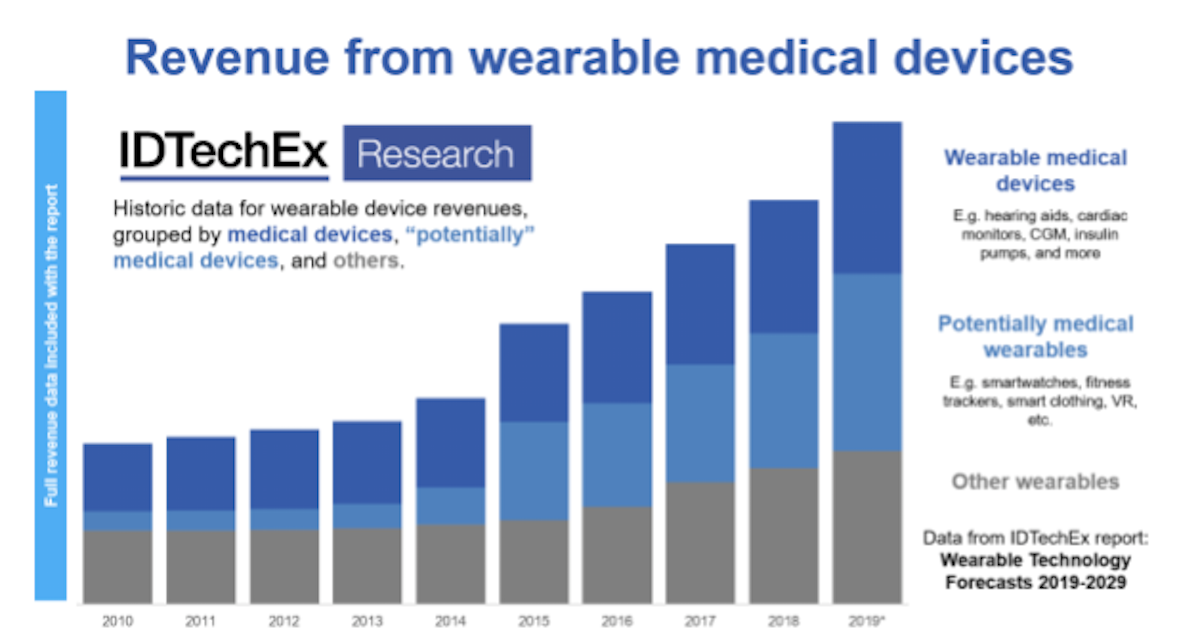 IDTechEx's historic revenue data on wearables, grouped by "medical devices", "potentially medical devices" and "others". Source: Wearable Technology Forecasts 2019-2029
However, it is not just the dedicated wearable medical device types that are interesting in this context. Companies are increasingly looking to leverage the data from other wearable devices for use in healthcare scenarios, from incentivizing healthy living from health insurers, to supporting early diagnosis of certain conditions, to collecting data for clinical trials. This has been most widely publicised in the context of the smartwatch, where certain products have already achieved limited status as medical devices. For example, the launch of the Apple Watch 4 came with FDA clearance for various cardiac monitoring capabilities. Some products with nearly identical functionality have been directly developed in the medical context, complying with regulatory guidelines from the beginning to produce fully medically relevant versions of smartwatches for similar data collection. These trends are discussed at length in Wearable Technology Forecasts 2019-2029.
However, it is not just smartwatches that have been touted as potential contributors to the medical device ecosystem. IDTechEx has been following the emerging area of smart clothing for over a decade, and whilst this industry remains in relative infancy, many of the key players in this space are increasingly turning to medical and healthcare applications for their e-textile products. For example, Canadian pioneer Myant have entered strategic collaborations with various players (e.g. Mayo Clinic, ZOLL and others), aiming to have their smart clothing products FDA approved. They have included features such as vital sign monitoring (heart rate, respiration rate, even, potentially, blood pressure), electrical muscle stimulation (EMS) and heating for injury recovery, chemical sensor integration and more. See IDTechEx's report on e-textiles for more information about technology in smart clothing. Similar stories can be seen in AR, VR, in "hearables" (already including hearing aids as a key medical device) and in just about every major sector under the wider group of wearables.
So, if the future of wearable is medical, then how much of the future of medical is wearable? Wearable devices may provide a convenient, ambulatory option for monitoring particular conditions over a period of time, and have found a particular home where the sensor device requires contact with the body. However, many medical futurists will point to potential in remote monitoring of several medical conditions. Whilst the origins of this may be rooted in science fiction, there have been many examples of companies pushing towards remote monitoring of different health conditions, and dedicated funding for such projects from some technology companies.
This is the first of a two-part article from IDTechEx discussing wearables in healthcare. For more information about IDTechEx, including details of both the upcoming conference Healthcare Sensor Innovations, and details of the latest report Wearable Technology Forecasts 2019-2029, please see the IDTechEx website or email research@idtechex.com.
Top image: Philips
PrintForwardTweetLikePinredditShare
Previous
Next