Mar 28, 2012 Cathleen Thiele
IDTechEx forecast the touch screen market to reach $14 billion in 2012. The biggest application for touch screens in general, and projected capacitive screens in particular, is mobile phones and, right behind, tablets.
The biggest market opportunity in terms of shipped units is for mobile phones. IDTechEx projects touch penetration in mobile phones to reach over 40% in 2012 and to rise to almost total coverage in the next decade.
Shipment of tablets with touch screen technology is expected to reach 100 million units in 2012.
Top Markets and Applications
The market for touch screens is already large because the technology has been around for quite a while now in ATMs, point-of-sales terminals and Kiosks for example, all rather specialised touch applications. Only a few years ago the true mass consumer market use of touch screens was conditioned by Apple's adoption of projected capacitive touch screen technology for the iPhone in 2007. After this other global players, such as Samsung and LG Electronics, also started to use touch technology for their wide range of products. Today, touch screen interfaces are becoming increasingly common in mobile consumer devices. Leading the touch screen technology market are high-end mobile consumer-electronic devices, such as smart phones and tablets. 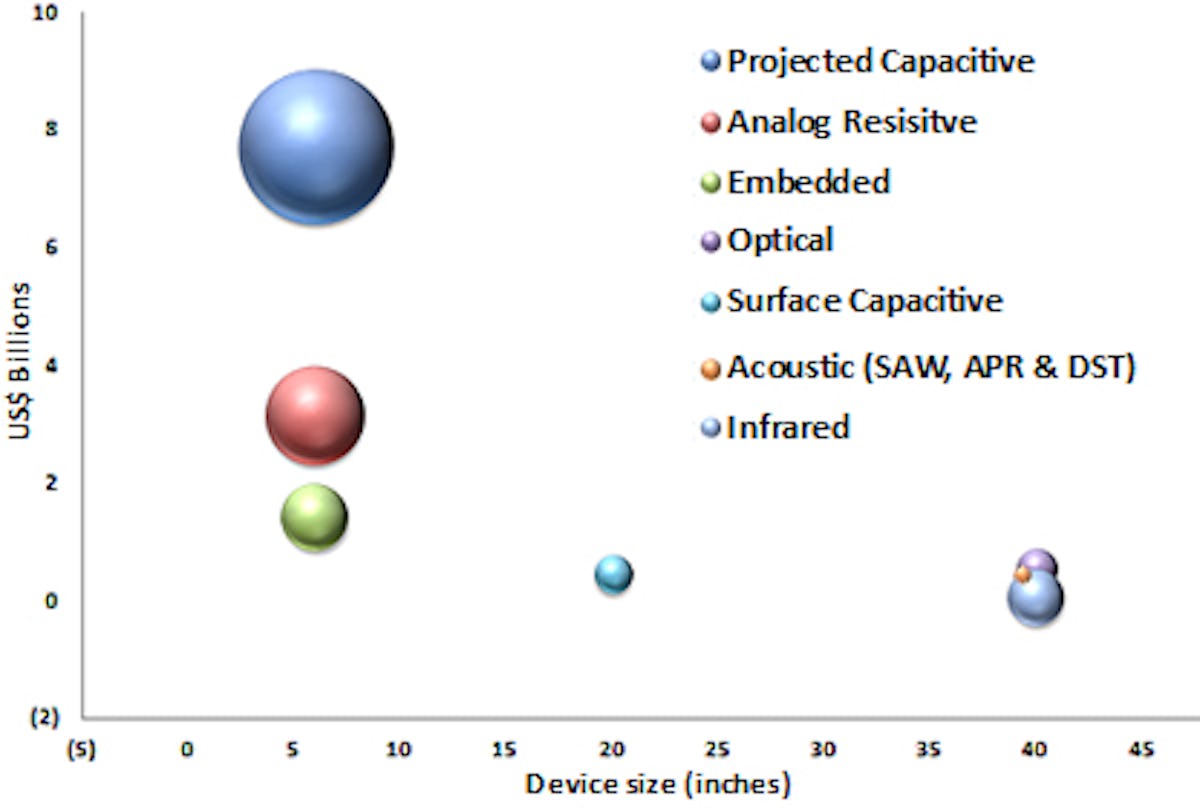 Source: Touch Screen Modules, Technologies, Markets, Forecasts 2012-2022
Mainstream Technologies
Along with the current market leading technology, projected capacitive touch, the industry has a dozen other ways of building a touch screen sensor, but not all of them are suitable for the rapidly growing consumer electronics market that needs high performance and high clarity.
Every single one of the different touch technologies has its own strengths and weaknesses and is therefore used in very different applications.
Today, the biggest market for projected capacitive touch screens is in mobile and smart phones, but tablets are right behind and quickly gaining momentum. Analog resistive technology is widely used in small size (> 10 inch) healthcare and hospitality applications as well as high-volume retail environments. Embedded touch technology is currently the leading emerging touch technology and on-cell technology in particular has the biggest potential for small size consumer electronics, but is also suitable for medium size applications.
Other touch technologies mainly relevant for specialised touch devices, such as ATMs, banking and financial applications, but also eBooks and mobile phones to some extent, are traditional infrared (IR) and surface acoustic wave (SAW) technologies.
Touch market forecast by technology in 2012 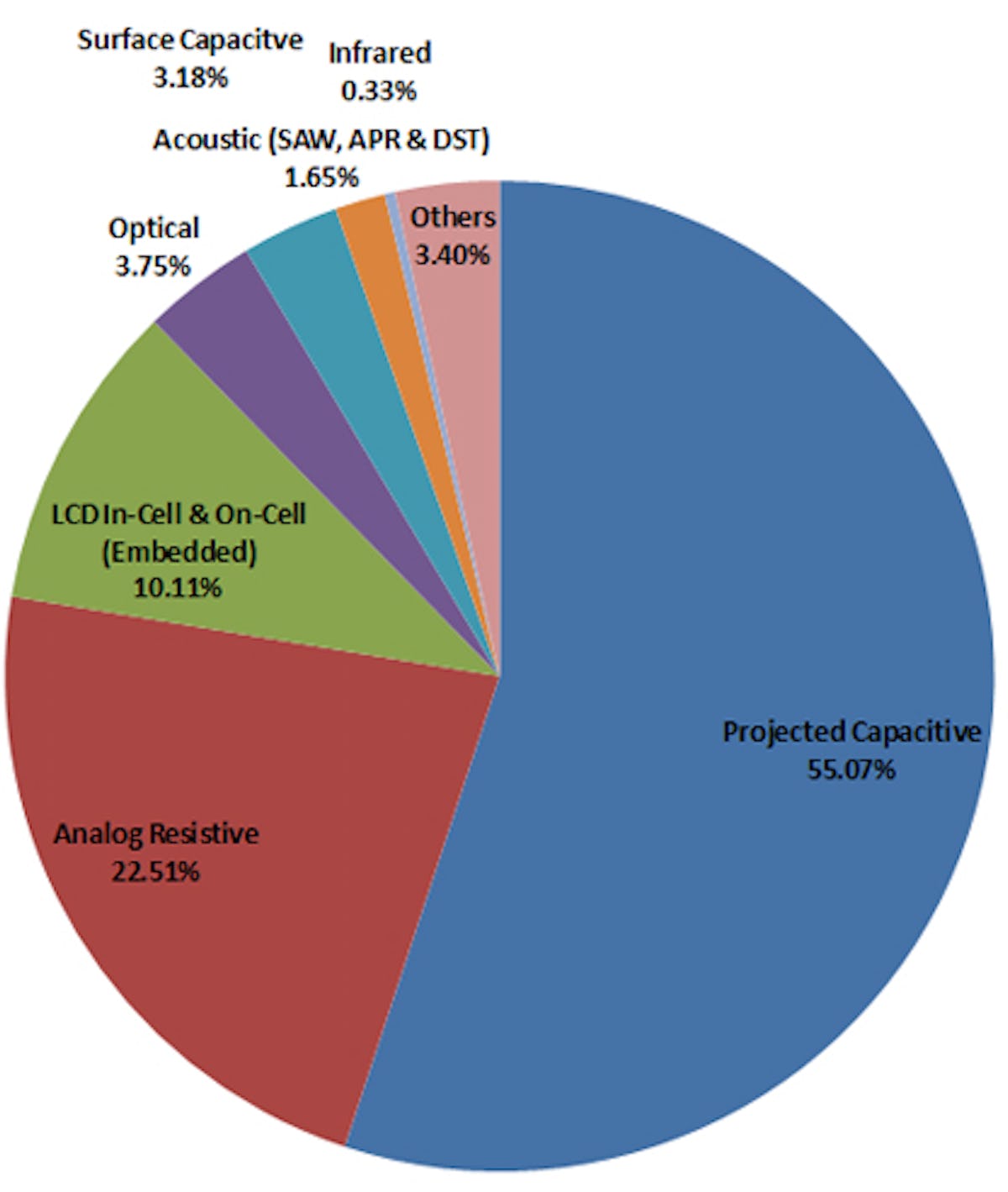 Source: Touch Screen Modules, Technologies, Markets, Forecasts 2012-2022
Opportunities
Apart from adding touch functionality to more and more commercial consumer devices, the next big topic and opportunity will be the replacement of indium tin oxide (ITO), especially in projected capacitive and resistive touch technologies; the two mainstream technologies.
Today, half of the costs of projected capacitive touch screen modules come from the ITO sensor. The replacement of this widely used ITO sensor electrode material will not only change the game entirely in terms of costs, but also open the gate to bendable, rollable and stretchable electronics with touch functionality.
Market volume to triple in 2022
The touch screen market is expected to triple in the next decade. The next big markets for touch screens are eBooks, (mobile) game consoles, car displays and navigation devices as well as digital cameras for small to medium size displays. Bigger touch screens over 10 inches can be increasingly found in laptops and PC monitors as well as other screens and TVs.
In ten years from now, projected capacitive touch technology will continue to lead the market as panel costs are decreasing. Due to extremely low cost, resistive touch technology will continue to lead the market in price sensitive applications that need precise touch. The rise of embedded touch technology, currently the leading emerging touch technology, will be conditioned by more and more LCD manufacturers entering the field.
New Research
All of these trends, including detailed ten year forecasts by touch screen technology and by application as well as primary user markets, applicability of the different technologies and application trends, are covered in the new IDTechEx report Touch Screen Modules, Technologies, Markets, Forecasts 2012-2022.
This report covers the technical, market and application trends for touch screens including the activities of over 100 panel and component manufacturers of touch screens. Also covered are mainstream touch technologies and biggest emerging touch technologies, how they work and what the primary use markets are. For full contents see www.IDTechEx.com/touch.
To learn more about the topic attend Europe's leading event on Printed Electronics and Photovoltaics Europe in Berlin, April 3-4. It explores the applications with many end users presenting their needs and experiences and it covers appraisal of all the key technologies; www.PrintedElectronicsEurope.com