Intel have released the long-awaited Edison - a powerful microcontroller the size of an SD card.

Nov 10, 2014 Dr Jon Harrop
At IDTechEx the integrity of our analysis is paramount. From time to time, it means that we question aspects of the strategy or products of even the famous names, rather than feel obliged to eulogise in the manner of some analysts and journalists. Here is an example. 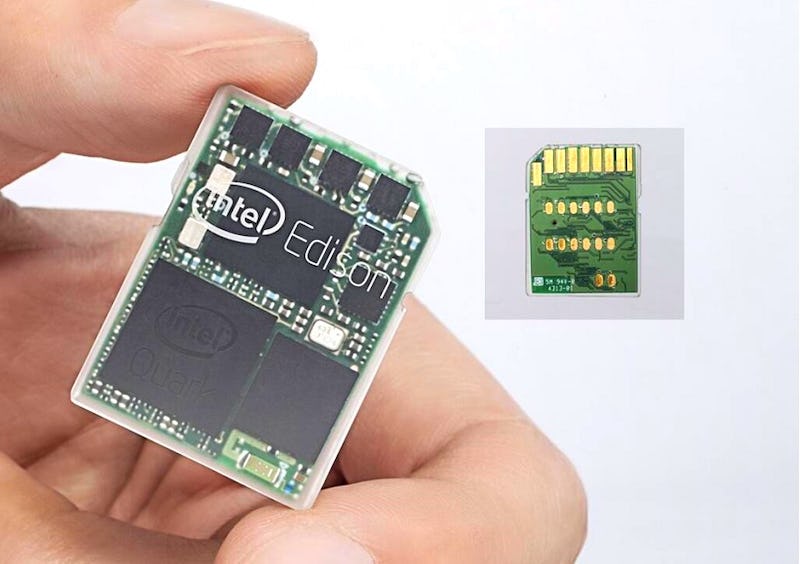 Intel Edison
Source: Intel
Intel have released the long-awaited Edison. Intel puts it this way, "Intel® Edison is a new Quark technology-based computer housed in an SD card form factor with built-in wireless. The product-ready, general purpose compute platform is well-suited to enable rapid innovation and product development by a range of inventors, entrepreneurs and consumer product designers".
Slated as a powerful microcontroller the size of an SD card, Intel's answer to the Arduino, the Edison was built to change the world of Makers and lubricate IoT development. See the IDTechEx report, Internet of Things: Business Opportunities 2015-2025.
In addition to using "make" in the catch phrase, Intel have even chosen to use maker distributors like Sparkfun and are giving it heavy coverage at Maker Faires around the world.
Hobbyists increasingly drive production
It used to be irrelevant what the hobbyists did. No longer. Most of the mechatronics and sensor products on Kickstarter will be based on the hobbyists Arduino:
https://www.kickstarter.com/discover/categories/technology/3d%20printing?ref=category_page
https://www.kickstarter.com/discover/categories/technology/diy%20electronics?ref=category_page
https://www.kickstarter.com/discover/categories/technology/robots?ref=category_page
https://www.kickstarter.com/discover/categories/technology/wearables?ref=category_page
In applications such as wearable technology, the hobbyist boards certainly enter production. See the IDTechEx report, Wearable Technology 2014-2024.
Most consumer-level 3D printers such as Printrbot and Ultimaker (and some mid-range ones) are based upon the Arduino. There are a few vendors of products for Makers, like Sparkfun, Adafruit and Inventables, that have gone from nothing to tens of millions of dollars turnover in a few years.
Lively debate
At IDTechEx we have had a lively debate on the subject. The bare Edison board is already bigger than an Arduino pro mini and, whereas the pro mini can be used as-is, the Edison requires more boards if you want to connect it to anything (e.g. a power supply!). Any real Edison-based solution will not be small. Future development paths for internet of things nodes, for example, are likely to become more complex even including multiple energy harvesting with challenging interfaces.
Edison cannot do low power consumption?
Some say low power but Edison requires at least 200mA at 1.8V whereas Arduino pro mini requires 0.5mA. In point of fact, Intel's x86 architecture is notoriously bad for power consumption. The only thing being x86 based brings to the table is the ability to run Windows which is clearly a non-starter in this context. If you want compute performance and low power, use ARM cores.
Edison vs Raspberry
On the other hand, people are also comparing the Edison to the Raspberry Pi but its main shortcoming there is lack of video output. The Raspberry Pi has a GPU with HD video output via HDMI. Edison has no video output or GPU. The Raspberry Pi has HD video output and a good GPU and it costs half as much as the bare Edison board. There are many other competing boards like the ODROID-X and Beaglebone. They all provide much faster CPUs than the Edison.
Price comparisons
Whereas an Arduino Nano costs about $4, the Edison costs $50 but you only get a bare board that is useless to a hobbyist. Then you need a breakout board for another $25-$100. The Edison uses 1.8V logic which is incompatible with pretty much every sensor out there so you need two PSU and logic level converters as well (which you can buy for $25 each). Although it has horsepower (dual core 500MHz) it apparently lacks some basic functionality found in the $4 Arduino Nano like the ability to read an analog voltage, i.e. ADC.
Wireless interfaces
Edison has WiFi and Bluetooth antennas integrated but Sparkcore is an Arduino compatible with integrated WiFi. At $39, it is cheaper than the Edison and does not require extra breakout boards to use it. Alternatively you can buy an Arduino compatible WiFi board for about $5.

Arduino compatible WiFi board
Source: Sparkcore
It can run multiple software at the same time.
Intel claims that it can run multiple software but you can "run multiple software" on any CPU. So our debate fell back on, "There is no equivalent available today". Actually, there is nothing exactly the same but there are established and strong competitors on every front.
Limited potential?
We think the Edison looks like a product with limited potential as currently designed and positioned. We cannot yet envisage any application that would benefit from the Edison vs alternatives. Arduino is great because it is cheap and easy to use because it has lots of solderable analog and digital IO pins. The Edison appears to capture neither benefit.
We suspect that the Edison is a loss leader. They may be willing to subsidise the creation of a migration path that takes professionals from prototyping with Arduinos to building successful commercial products based upon the Intel hardware on the off chance they will get some big wins in the long term with further developments. In the Internet of Things, as Cisco says, we shall only see the intended billions of IP addressed nodes with up to ten sensors if the cost is rock bottom, which almost certainly means Chinese manufacture.
Intel staff have been unable to give us a clear idea of what the Edison can achieve in the market place in the high volumes a huge company like Intel must seek. An ARM-based SoC with all the usual sensors integrated would be far more interesting in the view of IDTechEx. However, you the reader may have a different view. We welcome your comments.
IDTechEx event
For more about IoT and wearable technologies, also attend the IDTechEx USA 2014 event on 19-20 November in Santa Clara, CA.
PrintForwardTweetLikePinredditShare
Previous
Next