Aug 30, 2012 Dr Peter Harrop
A new IDTechEx report requested by several of the world's largest chemical companies looks at the families of element and compound that will be most widely used in the new electronics and electrics. Producers of fine chemicals wish to de-risk their materials development programs concerned with electrically functional elements and compounds. They wish to do this by understanding what basic families of formulation will be most widely employed in the new electronics and electrics not least energy harvesting and associated power storage such as lithium-ion batteries, lithium metal rechargeable batteries, supercapacitors and supercabatteries.

Wide area, flexible solar cells and harvesting at the MEMS and NEMS scale is part of this new world as is piezo harvesting with new materials, geometries and morphologies. Uniquely, IDTechEx has taken a very close look at all this from the viewpoint of what high value added electrical materials will be needed over the coming decade, with zinc based chemicals coming fourth among the families of inorganic compound that will be used in new electronics and electrics overall.

Indeed, zinc based compounds will climb this league table because indium compounds - even more popular today in these emerging devices - will lose share due to the price of scarce indium. We have also looked at which families of compound are the most electronically and electrically versatile making them attractive to future device designers and zinc compounds rate very highly on this criterion. For example, zinc sulfide is a light emitter and quantum dot for potential transistors, solar power etc.

Zinc oxide is a dielectric for insulation, capacitors and potentially other devices and zinc oxide based compounds such as InGaZnO will be very useful semiconductors in printed transistors - even ones on paper where the paper is both substrate and gate - printed ballistic diodes employing quantum effects rather than pn junctions, and so on, because they have higher charge carrier mobility than organics leading to higher frequency of operation and ability to drive current driven displays such as OLEDs. A SEM image of the vertically-aligned Ga-doped ZnO nanofiber is shown below. 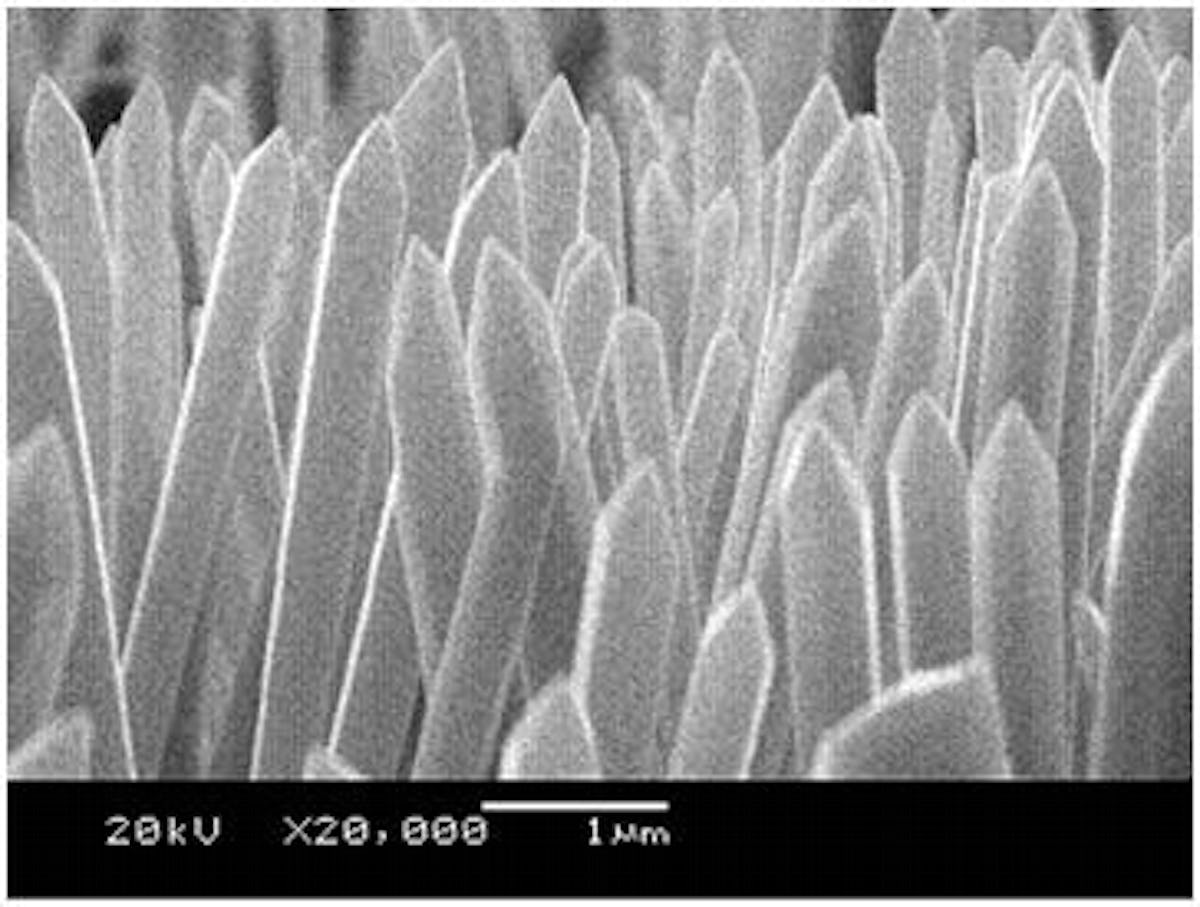 Source SPIE Singapore
They can even be invisible on a package or other product as they can be completely transparent. ZnO:Al is used in copper indium gallium diselenide flexible photovoltaics and elsewhere as an active electrode. Zinc compounds find use in new forms of nano-laser and in experimental zinc air rechargeable batteries.

Piezoelectric properties of ZnO are of interest for sensors and electricity generators on the micro scale. Zinc Selenide is at the core of a new fiber optic cable to improve performance. Last year, US researchers used zinc-oxide microwires to significantly improve the efficiency of ultraviolet UV light-emitting diodes LED. The devices are believed to be the first LEDs that have had their performance enhanced by using the so-called piezo-phototronic effect.
"By utilising this effect, we can enhance the external efficiency of these devices by a factor of more than four times, up to eight per cent," said Prof Zhong Lin Wang of the Georgia Institute of Technology's School of Materials Science and Engineering.
Rationally controlled growth of inorganic semiconductor nanowires is important for their applications in nanoscale electronics and photonics. In fact, zinc oxide nanorods have been studied with a view to producing p-type semiconductors for printed transistors and OLEDs. For example, the composition, diameter, growth position and orientation of the nanowires can be controlled based on the vapor-solid-liquid VSL crystal growth mechanism. Particularly ZnO nanowires with well-defined end surfaces can function as room-temperature ultraviolet nanolasers. Yiyang Wa of the Department of Chemistry of the University of California, Berkeley has additionally developed a novel microfluidic-assisted nanowire integration MANI process for the hierarchical assembly of nanowire building blocks into functional devices and systems.

In our report, some consideration is also given to identifying families of compound likely to sell in the largest gross value and zinc-based ones have good potential here too because complex mixtures, nanofibers, nanoparticles and other high added value versions will be needed.
The report is called Most-Needed Chemicals for New Disruptive Electronics and Electrics: De-risk Your Investment. It establishes the most widely demanded electrically functional elements and compounds in three categories - inorganic elements and compounds, carbon isomers and organic compounds. 37 families of device were investigated from a chemical viewpoint, looking particularly at 28 important elements, compounds and carbon isomers in the world of the new devices.

Zinc air rechargeable batteries are being developed by ReVolt Technologies. Imprint Energy has developed a flexible rechargeable zinc battery using a solid polymer electrolyte that can be printed in open air with low-cost commercial printers and requires only minimal encapsulation. Others are developing spray-on photovoltaics.
The polymer electrolyte reportedly has ionic conductivity of ~10-3 S/cm at room temperature yet is mechanically robust, flexible and requires no additional separator in the battery cell stack. The materials set and device fabrication approach enable batteries with energy density (>5 mAhr/cm2, 300 Wh/L) that exceeds the volumetric capacity of Li polymer technology, particularly in small battery form factors, largely because these stable Zn-based batteries require much less bulky protective encapsulation. The company targets small electronics like headsets and wireless health and fitness monitors.
Key to the technology is the polymer electrolyte material developed at UC Berkeley, which suppresses the formation of the dendrites that usually bridge the electrolyte and prevent recharging with most zinc-based batteries. Each ~200µm stack of electrodes and electrolyte produces about 1.5V, and the cells can be stacked and connected in series for higher voltages.
The early stage startup thinks it might be ready to contract out scaled manufacturing in about 18 months. "These are thick film processes, so they are more forgiving and are easier to scale than thin film," says MacKenzie. "We see this Zinc PolyTM technology as a safe, low cost alternative to Li- polymer in portable electronics that could change how products are designed, and allow for new portable electronics products that were not possible before," he notes.
Top image: Beyond Ordinary
For more read Energy Harvesting and Storage for Electronic Devices 2012-2022
And attend Energy Harvesting & Storage USA 7-8 November 2012 Washington DC, USA
PrintForwardTweetLikePinredditShare
Previous
Next