Please pick up your badges and the show pack at registration desk.

SHORTCUTS:
Agenda
Speakers
Exhibitors
IDTechEx Show!
Book a booth
Register to attend
11-12 April 2018, Berlin. Electric Vehicles: Everything is Changing will reveal the latest advances and newest roadmaps in this radically changing industry. We balance the presentations from the giants with new faces revealing important breakthroughs. IDTechEx finds the companies and researchers that break the mould.

New: Networking match making platform - connect with attendees and organise meetings in advance of the event 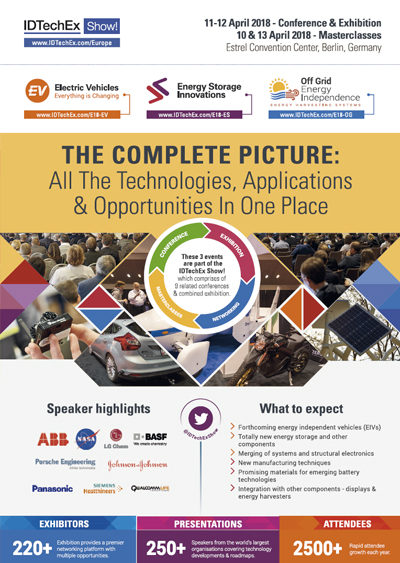 So what is changing?

Mechanical, pneumatic and hydraulic parts, silicon power components and dumb structures are on the way out. In come merged parts often radically different components such as SiC, GaN and GaAs based ones including added systems for electrical input such as regeneration, induction and external energy harvesting. New electrical loads proliferate and merge. Improved performance, fuel economy and emissions reduction result. Even conventional powertrains will avoid illegality under new emissions laws by being reinvented as mild hybrids. These will evolve into vehicles with many pure electric modes so the total EV market rockets to nearly one trillion dollars in ten years.

Can you afford to miss it?

New End Game: Energy Independent Vehicles EIV - pure electric that never plug in including solar minibuses that wake up with the sun and aircraft that stay aloft for five years. It is all here, with emphasis on the 15 year roadmap and best practice whether it is first seen underwater, on a dirt track or elsewhere. Researchers, companies and countries in the lead? Come and find out.

Good balance of technical information to actual examples of companies/products.

It was a great event. I enjoyed the exhibition. Very cool, very cutting edge stuff

I found it outstanding in term of organisation and quality of the topics.

I found the conference very interesting!

The conference and exhibition was really interesting and we had a lot of interest for our technology.

Hear market and technology insight from users and suppliers.

Over 200 exhibitors showcasing the full value chain in one place.

A large area dedicated to showing a full range of complete working products.

Relevant conference topics and co-located exhibition - over 2500 people in total.

Recognising the most impressive international work. 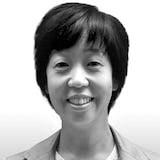 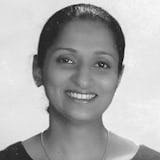