The Electric Vehicles: Everything is Changing exhibition in Berlin on April 27-28 will feature the world record-holding solar racing car Nuna8, which has been developed by the Nuon Solar Team. The Nuon Solar Team have won the Bridgestone World Solar Challenge six times, most recently in October 2015, which saw their solar car crossing Australia, 3000 miles from Darwin to Adelaide, powered by sunshine alone.

The Nuna8 features innovative suspension that has been developed to be of an exceptionally small size to fit in the aerodynamic shell. The Nuon8 also has remarkably efficient traction motors at 96%. The vehicles are also entirely built of carbon fiber, apart from the aluminium suspension. The racer weighs only 150 kg.

The Nuon Solar Team is a subsidiary of Zenith Innovations which is a non-profit Dutch organisation originating in Delft University of Technology. Its investors are the university and others.

Get the Tesla Motors experience at the Electric Vehicles: Everything is Changing exhibition. Tesla will be on stand C17 ready to sign up anybody who would like a test drive of their Model S! The car will be outside on the road behind the exhibition for the 27 and 28 April. Sign up at the Tesla stand C17 for a test drive in Berlin!

Tesla was founded in 2003 in Silicon Valley and shifted the rather traditional automotive scene in turmoil. Elon Musk, founder and CEO of the company, who is known among other things for his commitment for example Solar City and SpaceX, describes the overarching goal of Tesla thus, drive change from an internal economy to a solar electric industry. After the introduction of the Tesla Roadster, a supercar in the luxury sector in 2008, the launch of the Model S took place in 2012, the first 100% electric premium sedan. Finally, a few months ago Tesla's third vehicle was presented, the Model X. This SUV combines the space of a minivan with the performance of a sports car. In 2017/2018 the Model 3 will be presented, a typical middle-class vehicle, which will significantly contribute to the final breakthrough of the electric mobility.

The exhibition will also feature Altreonic on stand I13. Altreonic has developed the innovative KURT e-vehicle concept for urban mobility, indoors as well as outdoors. Using a disruptive architecture its modularity and scalability allows addressing a wide range of use case scenarios for people transport as well as for moving goods.

The vehicle can easily be customised for specific applications at an affordable cost. Being electric and using drive and steer by wire, it is highly maneuverable and compact. It can be remotely monitored and steered. Several vehicles can be connected with individual vehicles being reconfigured during use for different purposes.

Aero Service will demonstrate the EV4 on their stand, the EV4 is a 4 wheel drive vehicle made from an aluminium alloy.

Bike2 Aps is a Danish company founded in 2011 created for the development, production and distribution of the Bike2.0 bicycle and drivesystem.

The company is being led by the two founding members Nils Sveje and Jesper Allan Hansen in collaboration and with investment from Borean Innovation, and with support from Nordea Iværksætterfond And Welfare Tech Invest. 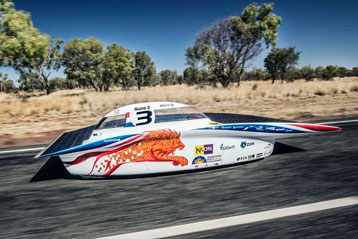 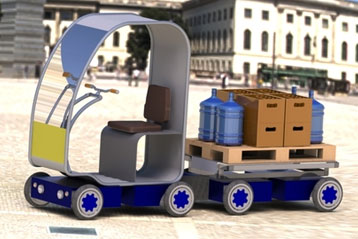 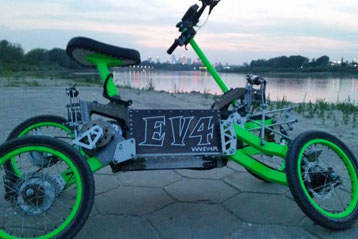 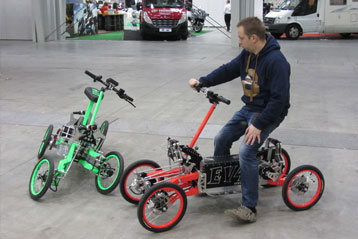 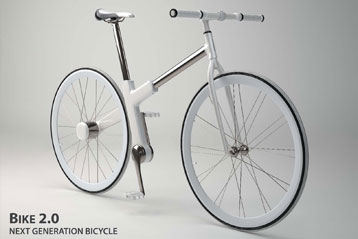