The unstoppable rise of China in graphene commercialization

Graphene Nobel Prize went to the Europeans, but will the commercial fruits primarily go to Asians, particularly the Chinese? In this article we demonstrate, based on our recent visits, how China is gearing up to run the show. To this end, we will consider the level of research activity, the rising production capacity, the falling sales prices of graphene, and recent successes in real commercialization beyond just R&D sales.
For more information please refer to our report Graphene, 2D Materials and Carbon Nanotubes: Markets, Technologies and Opportunities 2017-2027.This report provides the most comprehensive and authoritative view of the topic, giving detailed ten-year market forecasts segmented by application and material type. The market forecasts are given in tonnage and value at the material level. Furthermore, this report includes comprehensive interview-based profiles of all the key players the industry, providing intelligence on the investment levels, expected future revenues, and the production capacity across the industry and by supplier. In addition, this report critically reviews all existing and emerging production process.

Graphene was certainly hyped: no week went by without some laboratory result suggesting that graphene would revolutionize an industry with its superlative properties. The reality however, unsurprisingly, turned out different: graphene commercialization like most advanced materials was slow and not an overnight success.
We however assess that the industry will soon turn a page. Indeed, our forecasts suggest a major turning point around 2020-2021, setting graphene on the course towards becoming a $300M market by 2027.
Company revenues are going up at rapid rates. This is a positive sign even if, as expected, most are still in the red with growing losses. Companies have also installed substantial nominal capacity. This is real progress too despite utilization rates remaining low. This is because scale has enabled the suppliers to participate in real qualification processes and not just demonstrate performance. The industry has also explored many market opportunities, finally learning to place graphene within its real competitive space and to identify the applications that make commercial sense.
The market is however not without its set of challenges. Our statistics show that too many small firms chase too small a market pie with very few generating more than a million dollars annually. Indeed, we assess that many would not stand on their own feet in the absence of direct or indirect government subsidies, suggesting that the conditions are ripe for a consolidation process. The industry also does not have a strong grip on consistent supply quality and the market is still abound with too many extravagant claims. Graphene also remains a substitute material, inevitably making the commercialization more difficult as the incumbents have set a competitive price and performance reference in the market. All this is however very normal for a nascent advanced material technology.

The rise of China

We recently visited China to better understand the developments on the ground. As we had written before, the time to be complacent about China is over. It is simply not sensible to dismiss Chinese suppliers as low-quality copycats. Today, China dominates, or will soon dominate, nearly every technology space that we cover ranging from photovoltaics to batteries to 3D printing, and now, as we will show, to advanced materials like graphene.
First consider the chart below showing production capacity by company in tonnes per year (tpa). The largest suppliers are Chinese and close to 70% of the total nominal production capacity now resides in China. Evidently, the Chinese suppliers consider scale an integral part of their plans for targeting volume markets. As with rest of the world, capacity utilization here is also very low and the nominal capacity is subject to some exaggeration.
Interestingly, direct liquid phase exfoliation is popular in China. The figure below shows that 64% of global production capacity is based on direct exfoliation, whilst the rest is based on rGO, substrate-less CVD (which results in platelet and not film type graphene), and others. The high share of exfoliation is mostly attributable to its adoption in China where its share well exceeds 80% of the total nominal capacity there. This popularity partly reflects the fact that China started late compared to the first generation of western firms which adopted the rGO method since at the time it was better known and more mature. 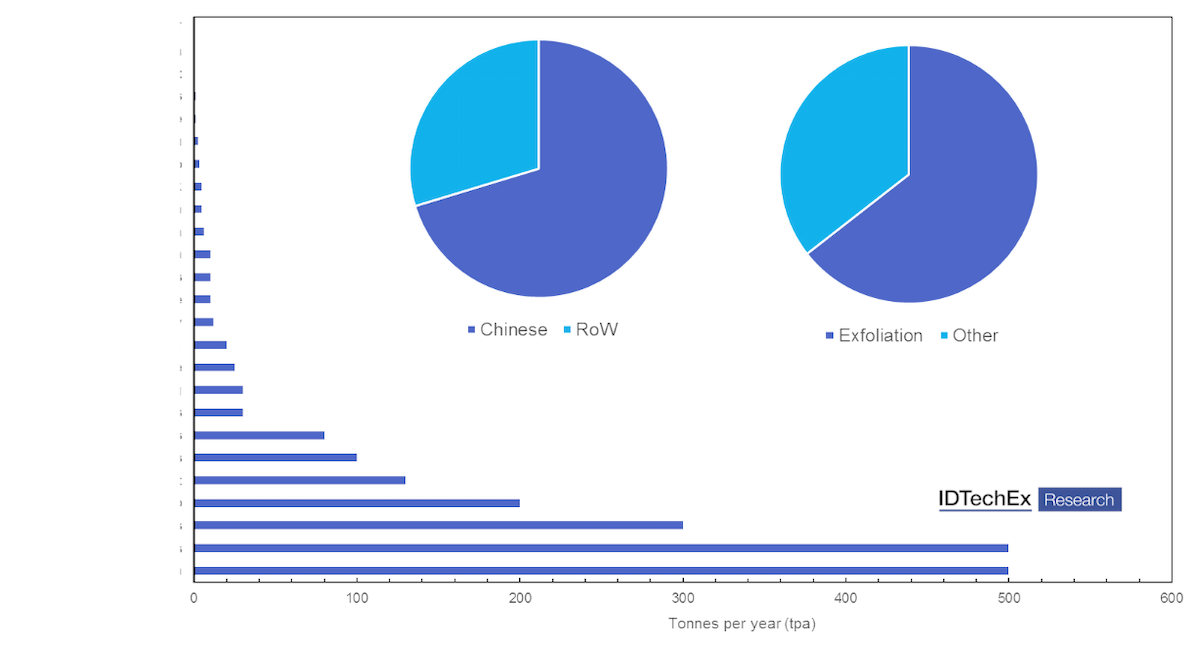 (Main chart): nominal production capacity by supplier in tpa. The supplier name is masked but is available in the report. We can see that few companies have gone for scale whilst there are many others who only have small to medium scale. Right pie chart: share of China vs. Rest of the Word (RoW) in total nominal global capacity. Left pie chart: Share of exfoliation as a process in total global production. The rising share of exfoliation is attributed to its adoption in China. To learn more about the emerging graphene industry refer to our report: Graphene, 2D Materials and Carbon Nanotubes: Markets, Technologies and Opportunities 2017-2027. Source: IDTechEx Research
In terms of pricing also China is amongst the lowest. This is no surprise as typically the prevalent business model has been to go for volume at low costs. The validity of this statement is also shown below. Here, we outline prices quoted by different firms. We highlight the Chinese producers' prices in red.
Note first how wide the price range is, spanning several orders of magnitude (we have filtered out prices that were an order of magnitude higher to make the chart clearer on a non-log scale). This price range has already narrowed substantially over the past two years, but some differences are likely to always persist as is often the case with speciality chemicals. Indeed, some of the current difference in price is already due to differences in quality and target applications.
In general, however, we believe that lower prices in China have to do more with pricing strategy as suppliers there are more willing to aggressively sell at or below cost or production to win market share and to generate revenue. Note that capacity utilization in China is also low, meaning that they will also struggle to implement further significant price cuts unless they can tolerate larger losses in order to kickstart the market.
Finally, let's consider technology availability and ownership. To this end, we have looked up data on the top ten patent holders in graphene. The figure below demonstrates the near total absence of non-Asian entities amongst the top ten holders. It also demonstrates that China and Korea dominate further suggesting that technological know-how exists and is growing inside China.

(Right graph) Sales price for graphene platelets in $/Kg. The patterned bars represent direct exfoliation whilst normal bars represent other graphene platelet production processes. The red bars- patterned and filled- represent Chinese suppliers. This shows that Chinese suppliers either match the lowest non-Chinese suppliers or are lower (Left graph): share of patent by country. Here each country is assigned a weight based on its overall contribution in the list of top ten patent holders. To learn more about the emerging graphene industry refer to our report: Graphene, 2D Materials and Carbon Nanotubes: Markets, Technologies and Opportunities 2017-2027. Source: IDTechEx Research

Will there be space for others?

Even when considering commercial successes, we can see Chinese firms as being amongst leaders. Indeed, we understand that in China graphene is already commercially being used in batteries, anti-corrosion coatings and some printed heater applications. The scale of sales there dwarfs those of most non-Asian graphene firms.
As we look to the future, we can already see that China is set to become the dominant player in graphene. This is because this rising Chinese industry has the technology, the investment, the resolve and the value chain including all the major target markets.
These imply that China will likely lead even if its companies remain largely absent from tradeshows abroad or even if its companies remain opaque to most outside. In fact, Chinese companies may have little short-term incentives to look outside given that size of the domestic market and given the sales and regulatory barriers for international commercialization of nanomaterials, leaving the RoW space open for others to conquer.
To learn more about the emerging graphene industry refer to our report: Graphene, 2D Materials and Carbon Nanotubes: Markets, Technologies and Opportunities 2017-2027. This report is based upon years of research and close engagement with the community of graphene and CNT producers, investors and users. In the past five years, we have interviewed and profiled almost all the graphene and carbon nanotube suppliers globally (>40), advised many investors and chemical companies on their graphene (and CNT) strategy, and guided many end-users.
PrintForwardTweetLikePinredditShare
Previous
Next