Mar 27, 2017 Dr Khasha Ghaffarzadeh
China has already once completely transformed the photovoltaic (PV) industry and maybe about to do so again. This is a major event for the conductive paste industry because the PV industry remains the primary volume market for firing-type pastes, generating a demand in excess of 1450 tpa in 2016. Any changes in this market will affect the entire industry, including the supplier business dynamics of all those nascent emerging markets that are apparently unrelated.
In this article, we will briefly discuss major industry trends but to learn more please refer to our report Conductive Inks 2017-2027: Forecasts, Technologies, Players. This report is the result of years of activity observing, analysing and participating in the conductive ink/paste industry.

The paste market for the PV industry is currently booming as PV sales are up in anticipation of the end of current feed-in-tariffs in China. In fact, sales has surpassed even the expectations material and paste suppliers.
The paste market has witnessed a change of market share in the past few years, but the high sales have once again buoyed, at least temporarily, even those former market leaders who had seen their market share drop in this perennially cost-sensitive market.
This change of market leadership in the PV industry, in turn, had major ripple effects across the conductive paste industry: big paste suppliers actively started to develop nascent markets that would have previously been considered too small in order to compensate for a dwindling market share in core markets. This, of course, will squeeze the space even more in niche sectors.
The industry remains highly competitive and price is the big differentiator. The innovation is incremental and is towards minimising consumption per wafer whilst increasing efficiency. The window of opportunity in which to capitalize on new formulations is often short-lived and products are all often comparable. The long-term trend towards the rise of Chinese suppliers is also taking shape: the know-how already exists, and the IP or capital barriers are also not formidable.
The powder suppliers also face interesting times. On the one hand, overcapacity has ensured slow change in the design of the dominant PV cell architecture, meaning that the role of paste metallization has remained secure. On the other hand, cell manufacturers now increasingly demand a diversified supplier base and reduced cost, suggesting increased competitive pressure for leading suppliers. Chinese suppliers are also on the rise here too: they compensate for their inferior technology by access to silver at subsidised local prices, which keeps them more than competitive.
This diversification process has been well under way for the past year, but the rate has been slow due to the incumbent's continued superior performance and the lock-in mechanism set in place by the fact that pastes were formulated around the incumbent's powders. This process is however inevitable unless a step-change in performance is demonstrated.

The paste market is shaped by a balance of two opposing trends: on the one hand, the PV industry and thus the wafer unit sales grow; whilst on the other hand, technology improvements reduce silver consumption per wafer. These two counter-balancing trends keep the market size fairly constant.
Recent analysis, however, suggests a slowdown in the PV market after the current boom in volume sales, particularly after the FiT deadline which brought the demand forward. At the same time, paste technology is expected to continue to improve and thus cannibalize its own sales. This points towards a peak silver consumption in the short term before 2020. This had been predicted by our business-as-usual forecast models.
This will, of course, also point towards continued intense competitive pressure right across the industry. On the positive side however, it might be speculated that it will lead to lower silver prices, thus further entrenching silver's competitiveness against alternative metallization solutions.

China has already completely transformed the photovoltaic industry once: it became the dominant manufacture with more than 65% of the world output in 2015, up from a measly 3-5% in 2004-2005. The rise of China in the PV industry is charted below. Here, China became the largest buyer of paste metallization products globally, leading to a complete re-organisation of the entire industry from production sites all the way to sales/marketing teams.
China might be about to transform the game once more: it recently announced around $140 billion of investment in the solar industry over a four-year period. Whilst this is major news for the industry, its details are still unclear. For example, it is not clear whether the investment will be applied on the supply or the demand side.
If applied on the demand side, we can speculate that sales will grow more than previously predicted, dispelling fears of a slowdown in PV sales after the end of the FiTs in China. It will also accelerate the rise in capacity utilisation, pulling the PV production industry out of its long-term state of over-capacity. This may, in turn, lead to investment in mass production of new cell technologies, opening the way to alternatives to paste technologies.
If applied on the supply side, it will result in a further increase in production over-capacity, making the PV industry similar to many other industries that face a supply glut thanks to overinvestment in China. It will probably lead to further price pressures through the entire value chain, whilst the new CapEx investment cycle may also pave the way for new cell technologies. 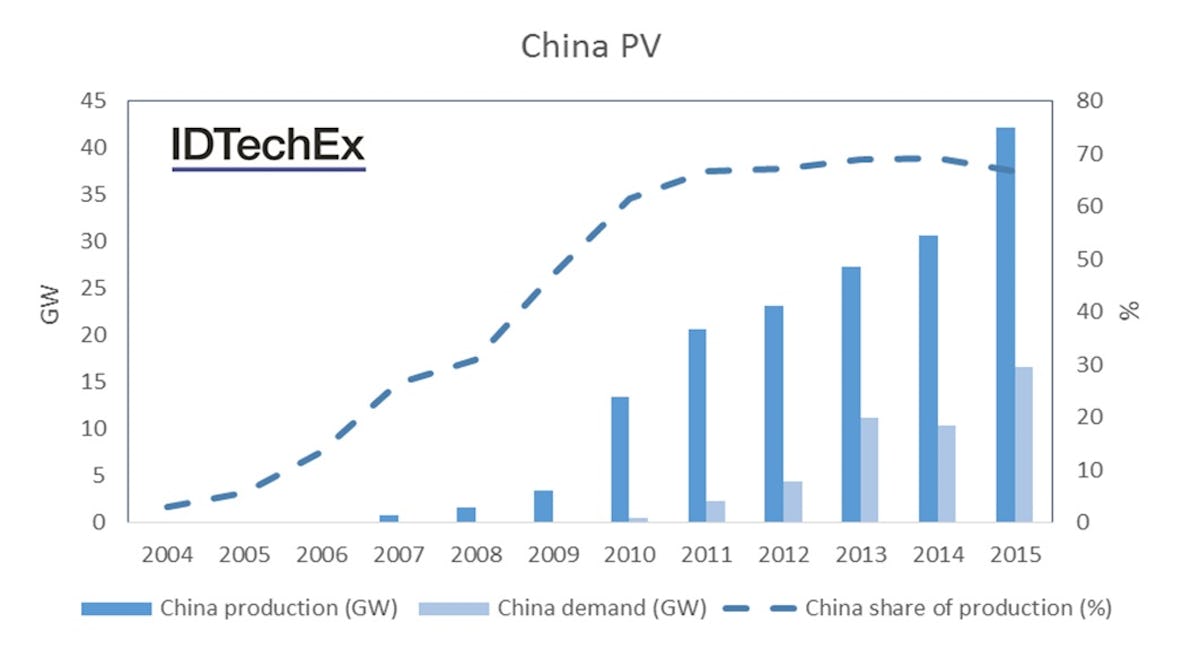 The rise of China in the PV industry charted in terms of production, demand and market share.

Screen printing has proven itself a resilience and cost-competitive technology. It has survived shocks such as the spike in raw silver prices in 2008. It has also steadily improved, managing to simultaneously reduce consumption per wafer and increase efficiency.
It has however not improved as fast as the industry itself had predicted in 2011. The chart below shows the various predictions published by ITRPV between 2011 and 2016. It is clear that the industry had been more bullish in the past. At IDTechEx, we think that the current projections are also ambitious: the technology is already mature and thus unlikely to register such rapid gains.
The major question facing the industry in the long-term however is both whether and which alternative technologies, both for new cell architecture and metallization processes, will finally gain ground or not. For example, if heterojunction cells become mainstream then paste suppliers can expect a rise in paste content per wafer, at least in the short to medium term. In contrast, if plating improves its maturity and cost structure then paste suppliers fear a dwindling market share.
In general, the potential new major investment cycles in places like China, slowing pace of paste improvement, and increasingly maturity of alternative technologies all combine to create increased risks for the long-term future of paste metallization technology.
Despite this, we believe that paste business is secure in the medium to long term and challenge will be predominantly in retaining a strong market share based on maintaining a low cost base. To learn more about our latest assessment of the industry trends please refer to our latest report Conductive Inks 2017-2027: Forecasts, Technologies, Players. 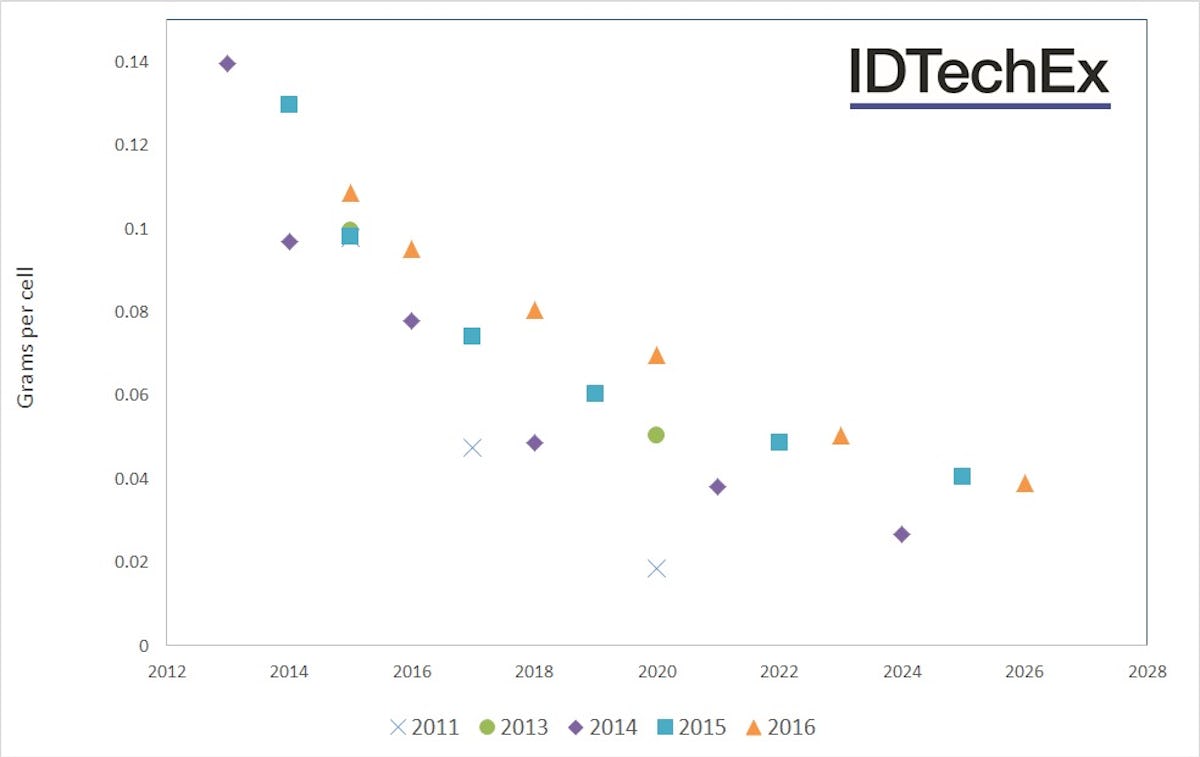 Projections reductions in silver consumption per wafer by ITRPV over the years.
PrintForwardTweetLikePinredditShare
Previous
Next