Mar 18, 2015 Dr Peter Harrop
Autonomous vehicles are successful here and now but you are unlikely to meet one because the successes are in the upper atmosphere, open cast mines, nuclear power stations, underwater and in other relatively inaccessible places. As the new IDTechEx report "Autonomous Vehicles: Land, Water, Air 2015-2035" www.idtechex.com/auto explains, the primary technology of an autonomous vehicle is that which confers autonomy and the powertrain, which is usually electric. These technologies by land, water and air have much in common as shown below.
Technologies of existing and planned autonomous vehicles by type of function 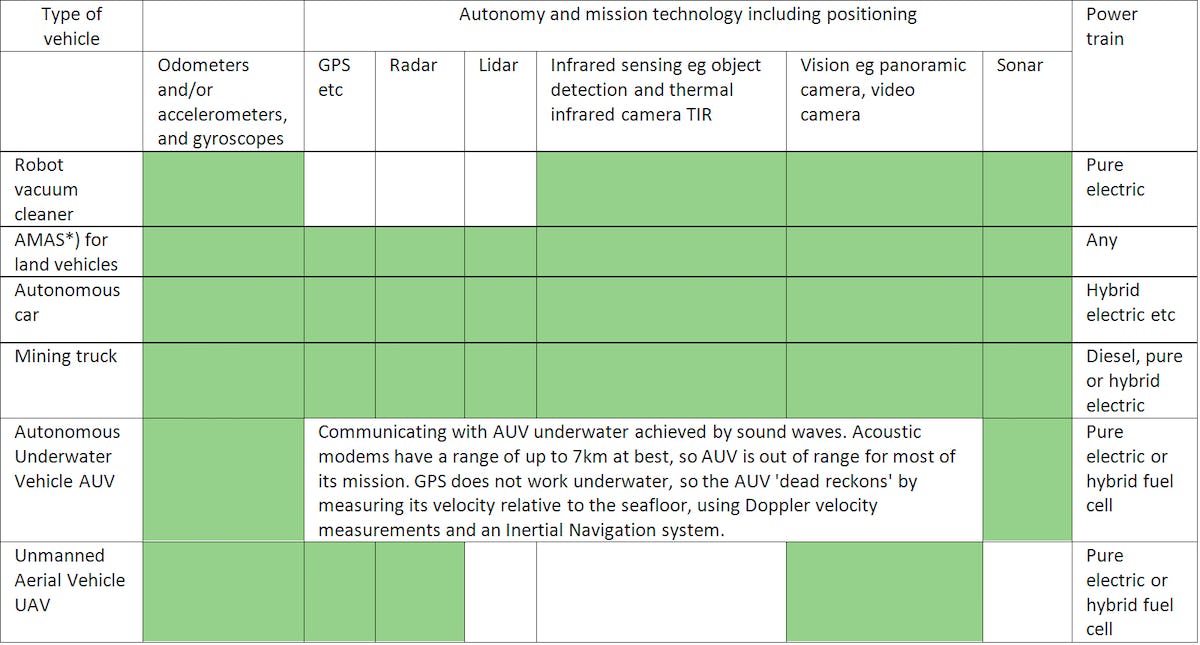 * Military Autonomous Mobility Applique System
Source IDTechEx report, "Autonomous Vehicles: Land, Water, Air 2015-2035"
The powertrain and navigation and control technology of autonomous vehicles are rapidly evolving with every element likely to change radically and many merging; indeed it is already happening right through to structural electronics where the load-bearing bodywork doubles as electrical and electronic components and circuits. See the IDTechEx report, "Structural Electronics 2015-2025" www.idtechex.com/structural.
This is good news and bad news for autonomous vehicles. Good news in that functionality and affordability will improve but bad news in that long term testing is irrelevant when everything is frequently changing disruptively. What use is a five year test on a Radar when a Lidar replaces it? What to do with long term tests on a battery when it is replaced by one of the new lithium-ion capacitors? All this vast number of new innovations can bring initial lack of reliability and predictability with them yet if anything has to be superlatively reliable and predictable it is the autonomous vehicle operating near people. The more people are in close proximity, the greater the challenge. AVs are particularly lethal if flying over a crowd of people or navigating a crowded road with pedestrians crossing.
From 2015-2025, most forms of autonomous vehicles will remain electric land and air vehicles. Electric powertrains are exceptionally controllable and they can directly activate and collaborate with other functions of the vehicle that are autonomously managed in coordination with steering and navigation. For example, an autonomous electric tractor will operate implements with great precision when they are electrically driven from the electric powertrain of the vehicle. This is invaluable in providing autonomy.
In numbers and probably market value, most substantially-autonomous vehicles will be pure electric, notably robot vacuum cleaners at the order of one million yearly. However, if we consider minimally autonomous vehicles, then, from 2015 - 2025, the largest numbers and market value will include cars at the order of one million yearly averaged through the decade. The sales of cars with capability of self-driving through most or all of a journey on regular roads is estimated below. Paradise delayed. In the next ten years it will not be cars that are the great success.
The sales of production cars in number million with capability of self-driving through most or all of a journey on regular roads 2015-2035 by region.

The emphasis of the report is on lessons of success and failure and what comes next, with lead indicators of such success. Timelines to 2040 of market, technology and allied advances are given and detailed forecasts of sales of autonomous vehicles from 2015-2025 particularly concentrate on numbers, unit value and total market value.
About IDTechEx
IDTechEx www.idtechex.com

guides your strategic business decisions through its Research and Events services, helping you profit from emerging technologies.
We provide independent research, business intelligence and advice to companies across the value chain based on our core research activities and methodologies providing data sought by business leaders, strategists and emerging technology scouts to aid their business decisions.
IDTechEx Research Subscriptions
Subscribing to IDTechEx research services gives you access to a wide range of our technology and market research on a given topic or across topics. It provides you with unlimited access to new related content throughout the subscription period and on-going support from our dedicated team. See www.IDTechEx.com/subscriptions for more details.
Contacts:
Teresa Henry
t.henry@IDTechEx.com
UK: +44-(0)-1223-812300
USA: +1-617-577-7890
PrintForwardTweetLikePinredditShare
Previous
Next