Juil 06, 2016 Dr Peter Harrop
A recent paper, Christophe Moure and Natalia Artal Paracuellos of Applus Idiada consider, "Energy management of multi-storage systems in electric Vehicles". In 2009, Applus Idiada electrifed a Nissan Cabstar light-duty truck without sacrificing any of the key specifications, especially speed, hill-climbing and general comfort but range was inferior. Now they have modelled moving from a battery alone to battery with fuel cell to double range and supercapacitor to increase battery life, checking what other benefits may accrue as well. They write,
"An electric vehicle with three energy storage systems shows the complexity of commanding different control systems in only one vehicle. Both new systems can supply the required energy to propel the electric motor and the fuel cell system can also recharge the high-voltage battery. The fuel cell system provides an additional range in proportion to the capacity of hydrogen storage tanks, the tanks that supply energy to the fuel cell power module (FCM). This system converts the initial electric vehicle into a fuel cell range extender vehicle. A dynamic DC/DC converter adapts FCM voltage to the high-voltage battery voltage in order to act at the same voltage rate. A second DC/DC converter, in this case bi-directional, does the same with the supercap system, which provides instantaneous high power to satisfy high demands. Consequently, this is not only a fuel cell range extender vehicle, but a multi-energy storage electric vehicle combining high power and high energy as illustrated.."
Vehicle architecture and characteristics 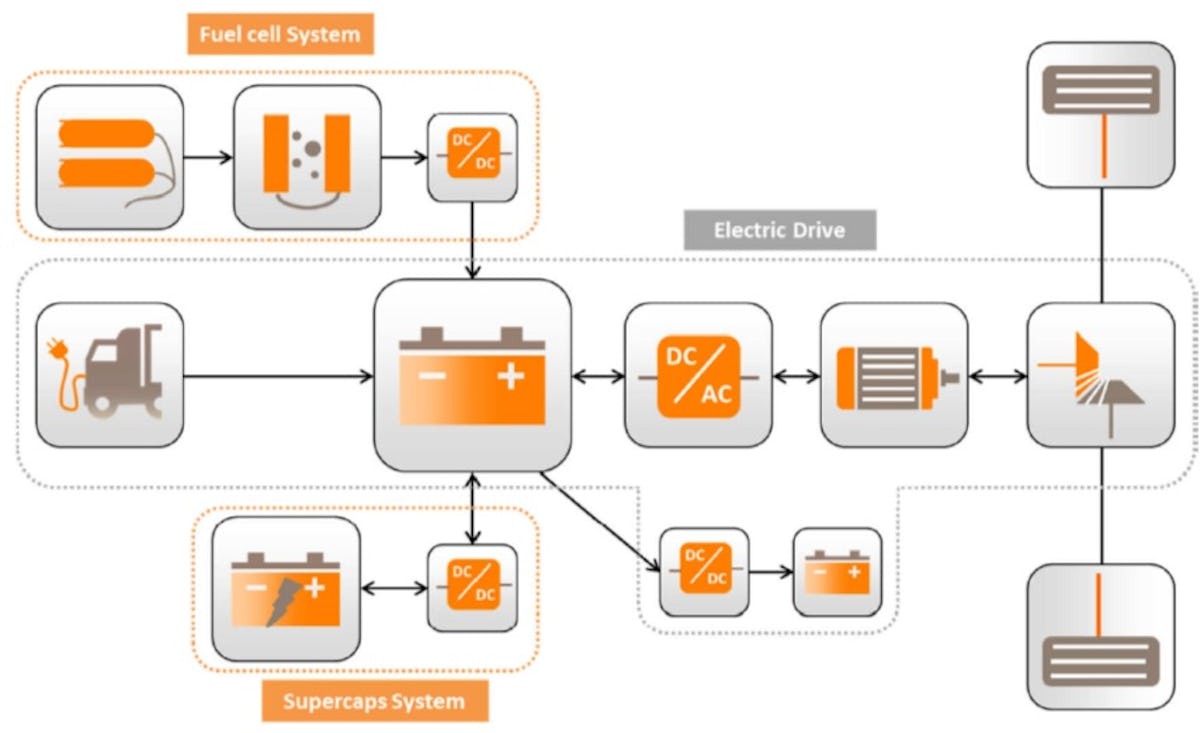 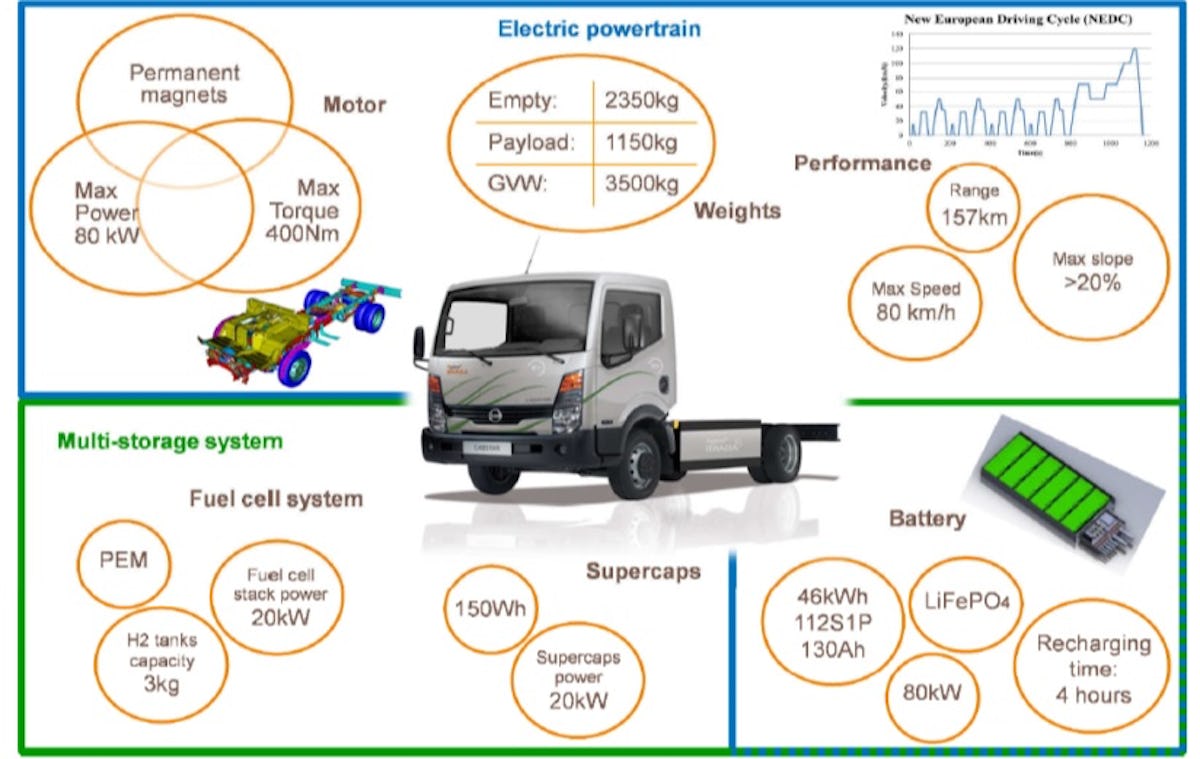 Source Applus Idiada
"Based on this vehicle topology, the challenge of the energy management algorithm is to make the most of each energy source, i.e. high-voltage battery, fuel cell and supercaps. Nowadays, freedom and constraints related lithium batteries are well-known and extensively described in literature. Therefore, the final purpose is to take advantage of the strengths of one energy source to cover the limitations of the others, which will lead to obtaining a multi-energy storage system with an extended capacity and an increased lifecycle".
Based on a study of expectations, it was decided to double the vehicle range to cope with all the possible configurations and user needs. The gross vehicle weight is a constant that cannot be modified without structural modifications of the chassis and should remain the same, i.e. 3500 kg. In that case the payload was reduced to install fuel cell, tanks and piping. This allowed the energy capacity stored in the vehicle to be doubled without considering any additional loss:
Having a fuel cell required the payload to be reduced.
Effect of fuel cell on payload. Fuel cell control. 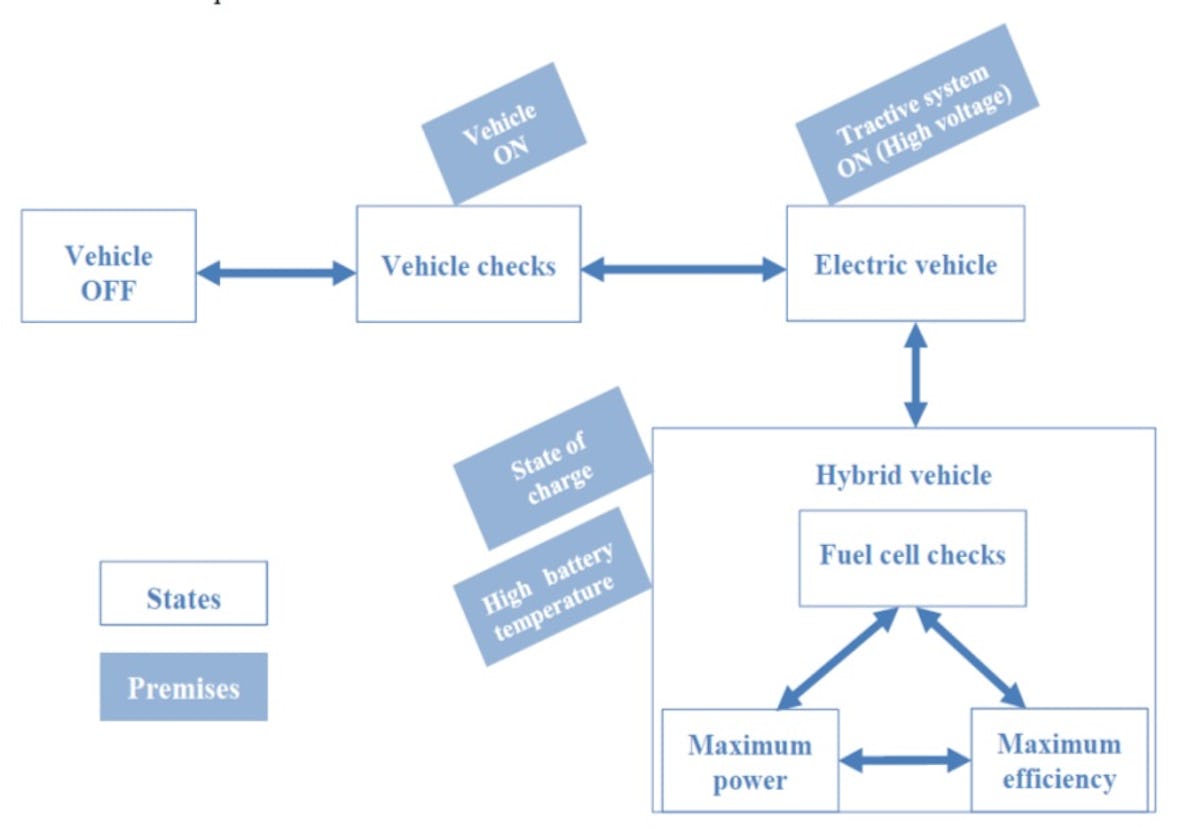 Source Applus Idiada
"The control of the fuel cell was designed using a state machine as a basis to set the fuel cell command at any moment. Four states have been considered ....
drive.
fuel cell system.
The hybrid vehicle state is divided into several sub-states to define the most adequate power needed from the fuel cell. This depends mainly on the battery state of charge, the battery temperature, the hydrogen level and the fuel cell temperature".
Fuel cell + supercapacitors control 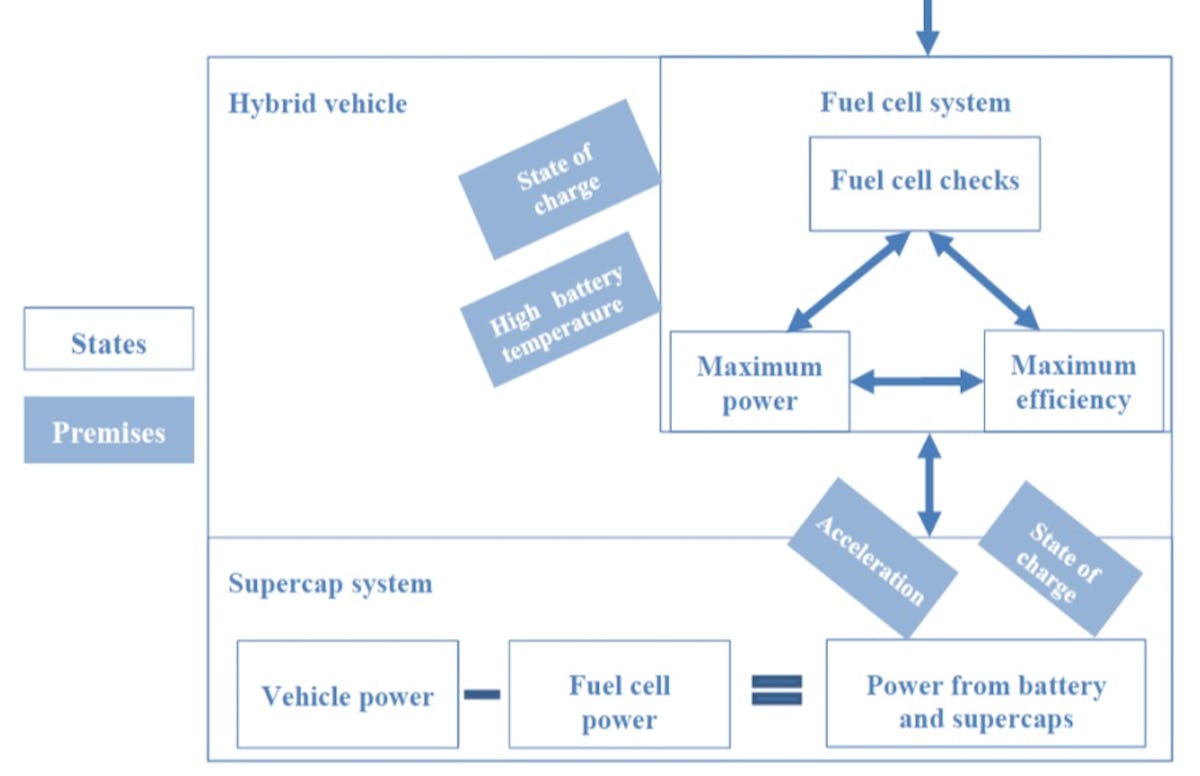 Source Applus Idiada
The expected vehicle lifetime is 400,000 km. A supercapacitor control algorithm was also developed partly to optimise the increase in battery life achieved from fitting it and it was concluded that battery life could be made to exceed vehicle life by this means.
Simulation comparison
Source Applus Idiada
Their conclusions were:
"The reduced range, or rather, the lack of energy capacity of electric vehicles together with limited lifecycle of lithium ion batteries were the key targets of this study. One of the premises for the integration of the fuel cell system was to double the initial range of the baseline vehicle, 157.1 km. This target was fulfilled as the vehicle range of the HEV (fuel cell system) was satisfactorily increased up to 308.9 km.
The impact expected for the supercap system was a prolongation of battery lifecycle by reducing the battery energy throughput and absorbing the peaks of power and thus, avoiding battery over-heating. The task of the supercap system was to supply energy during peaks of power demand and reduce the power provided by the battery. This target was also fulfilled as the maximum and minimum battery powers required during a driving cycle were reduced to 44 kW and -11.5 kW. In addition, the energy throughput required to reach the vehicle lifetime was significantly reduced from 2931 for the baseline vehicle to 2035 cycles for the HEV (fuel cell + supercars).
This study has successfully demonstrated the feasibility of different energy sources combined with a full electric traction platform. The integration of fuel cell technology based on fuel cell stacks and hydrogen tanks has led to an increment of total vehicle range. The implementation of supercap technology has presented the prolongation of the lifespan of high-voltage battery by reducing the needed battery power and the total number of cycles required for the same number of kilometers driven. Within the framework of this study, the baseline vehicle was an existing electric vehicle. Therefore, another scenario would be an approach of investigation starting from scratch. A virtual vehicle would be developed from the beginning and the study would be focused on selection and definition of three energy sources: high-voltage battery, fuel cell system and supercap system, in terms of capacity and power."
IDTechEx comment
Using three energy storage technologies is an old idea that founders on the cost and complexity. This work has been overtaken by events, with the doubling of range typically achieved by simply stuffing in more battery as costs come down as in the Tesla 3, GM Bolt and commercial equivalents. That will be followed by more efficient powertrains (including new forms of regeneration), aerodynamics, lightweighting (including structural electronics) and added energy harvesting. The trend is to fix the vehicle in preference to the infrastructure. Requiring a driver to find both electric and hydrogen charging points is not the way to go. Companies such as Yutong do use supercapacitors across traction batteries in their buses and trucks to improve acceleration and battery life but their policy is to simplify with better batteries and no supercapacitor. However, if some recent Li-ion batteries claimed to be tolerant of deep discharge check out as such then the supercapacitor may come back to maintain voltage and use the last 10% of battery capacity to get that much more range. This has been demonstrated by supercapacitor manufacturer Nippon Chemicon. See IDTechEx reports, Industrial and Commercial Electric Vehicles on Land 2016-2026, Future Powertrains 2016-2026, Power Electronics for Electric Vehicles 2016-2026, Structural Electronics 2016-2026, Lithium-ion Batteries 2016-2026.
Top image source: Applus Idiada
PrintForwardTweetLikePinredditShare
Previous
Next