Nano-copper is 10 times stronger than copper

Nano-copper is 10 times stronger than copper

Juil 27, 2015
At IDTechEx we have invited a number of leading players in the nanocarbon industry to write opinion pieces, reflecting on their produces, latest research, market insight, and commercialisation experience. We will be releasing these articles over the next few weeks.
This article is by Dr Jens Kroeger CTO of Raymor Industries, a Canadian manufacturer of high-quality single-walled carbon nanotubes.
To learn more about the industry, please refer to our report Graphene and 2D Materials: Markets, Technologies, and Opportunities 2015-2025.
How often have you heard that graphene conducts better than copper while being 100 times stronger than steel? Too often if you ask me, even though similar statements are still routinely used as the first sentence of academic publications or the tag line of new tech firms. The truth is that graphene and nanotube specifications are determined at the nanoscale, while the conductivity or Youngs' modulus (strength) of copper and steel are determined for macro-scale (typically a few inches) test specimens according to ISO or ASTM standards. If copper or steel were characterized at the same nanoscale, their physical properties would also 'turn out' to be much better. This phenomenon is due to the presence of microcracks and their increasing appearance with object size, thereby rendering large objects weaker than small ones. The investigation and formalization of this size dependence of object failure began with Griffith in 1921 and was formalized by Weibull probability theory. It has even been speculated that scale-related bone strength provided a limit to dinosaur size (Alexander, 1968).
Back to graphene, copper and steel, and their good looking performances at the nanoscale. Why is it that no one started a company selling nano-steel or nano-copper with superlative specifications? While part of the answer is certainly that customers might smell the rat, another part of the answer is that nano-copper cannot exist at ambient conditions. As a material's specific surface area, and thus chemical reactivity, increases as the inverse of the particle's radius (for spheroidal particles with constant density), most nano-sized metals oxidize violently in air and are only found as non-conductive oxides. Only very inert metals such as gold or silver can be manufactured at the nano-scale while retaining their metallic behavior such as electrical conductivity.

It is precisely for that reason that nano-carbons such as graphene, carbon nanotubes and other fullerenes have a bright future. Not so much because graphene is better than other materials in one particular metric, but because it is good in almost all metrics and is stable at the nano-scale.
Nano-carbons do not react with oxygen at ambient conditions, nor are they affected by harsh chemical environments. This is why they are widely used in batteries and fuel lines where they are exposed to strong acids or solvents. They conduct electricity better than many metals and are certainly more flexible than oxides. Graphene and nanotubes are particularly useful in applications where their planar or filamentary geometry are required. In fact, most modern electronics and even batteries are fabricated in thin film form factors ideally suited for the incorporation of nano-carbons. Nanotubes or graphene networks render transparent plastic films conductive, which is necessary for display or photovoltaic applications, and can be printed and assembled into electronic circuit elements such as transistors, sensors or memory. 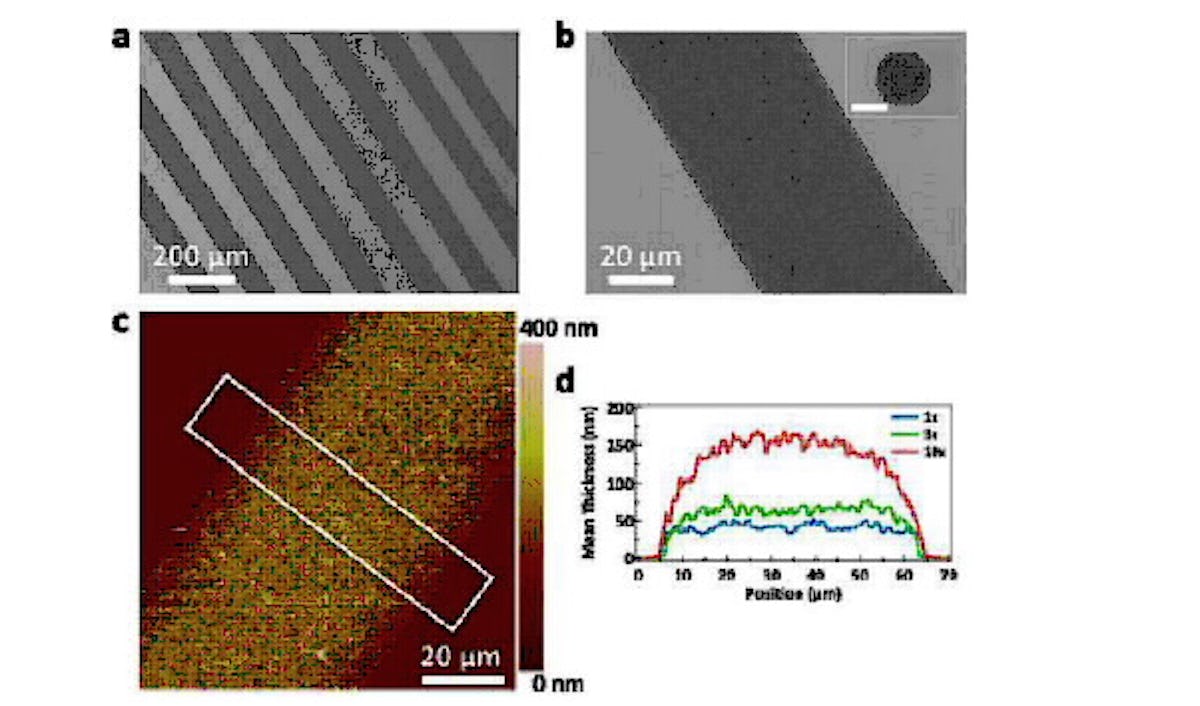 Morphology of inkjet-printed graphene features on HMDS-treated Si/SiO2. From Secor at al. J. Phys. Chem. Lett. 2013, 4, 1347−1351. Reprinted with permission from the American Chemical Society.
Graphene does not stand out some much because it beats incumbent materials in any single metric, but because it is such a stable electrical conductor... an all-round, versatile conductive filler that can be dispersed in a variety of solvents and matrices and applied with methods ranging from spray coating to screen printing. What water is to solvents, nano-carbons may be to to conductive fillers. While graphene might not enable new superstructures such as an elevator to space or an ultimate antiballistic vest, the extreme durability and well-roundedness of graphene and other nano-carbons will help them find their way into a myriad of applications and permeate into many household objects. After all, is it not nano-sized carbon-based molecules that life chose as its most fundamental building block?
Founded in 1980, Raymor Industries is a high-end nanomaterials producer that supplies carbon nanotubes, graphene and other premium solutions and formulations primarily to the electronics market. Using a patented plasma technology, it synthesizes single-wall carbon nanotubes at industrial scale and with superior quality. Raymor's subsidiary, NanoIntegris Technologies, is the world leading provider of high mobility semiconductor inks. These inks contain high-purity, sorted semiconducting single-walled carbon nanotubes. They are formulated for inkjet and aerosol printers and used in the development of the next generation of high-mobility transistors for sensing, logic and display driver applications.
PrintForwardTweetLikePinredditShare
Previous
Next