2009525 Dr Peter Harrop
This year has already seen a huge increase in the choice of electronic components that can be printed or are compatible with printing in that they are thin, flexible and can support further printed circuitry on top.
There have even been new types of components appearing that will greatly enhance the functionality of printed circuits. For example, a memristor is a fundamentally new component for electronic circuits that industry scientists developed in 2008 and created in thin and flexible form at the National Institute of Standards and Technology (NIST) in the USA in 2009. The NIST invention was initially seen as flexible low cost memory to compete with the Thin Film Electronics but it has now been shown to act as a memristor and this is opening up new possibilities.
The memristor is a component theorized in 1971 as a fourth fundamental circuit element (along with the capacitor, resistor and inductor). It is a resistor that changes its resistance depending on the amount of current that is sent through it and retains this resistance even after the power is turned off.
InkTec recently printed ferroelectric non-volatile memory reel to reel and with high yield: it was developed in Sweden by Thin Film Electronics. Other advances include thin flexible lasers demonstrated at Cambridge University CAPE in the UK, flexible thin supercapacitors from CapXX Australia and thin flexible thin Supercabatteries from Nanotecture in the UK. The latter combine the properties of a battery and supercapacitor and are intended to outperform supercapacitors. Some are well under one millimeter thick.
Alternatively, thin fuel cells have been developed that are intended to outperform even lithium thin film batteries. German researchers at the Technical University of Berlin and the Fraunhofer Institute for Reliability and Microintegration IZM in Berlin have developed a fuel cell that weighs only 30 grams and has an output of 12 watts - giving a power density of 400W/kg that has only previously been seen in much larger systems.
First intended use is a mini helicopter powered by very light fuel cells that could find people trapped in earthquakes.
As well as being used in contaminated areas, the fuel cell could be used as a charging point for laptop computers and cell phones. The researchers reduced the weight by using very thin, planar fuel cells. IZM team leader Dr. Robert Hahn explained, "We have replaced the metal plates by lightweight plastic spacers." The researchers have no need for an additional pump to provide an adequate air supply. The wind generated by the helicopter's rotor blades goes directly into the air vents.
The scientists had to devise a solution for the hydrogen supply, too, as a conventional pressure tank would be too heavy for the helicopter. "We have built a small reactor containing solid sodium borohydride. If we inject water, this produces hydrogen," continued Hahn. A prototype of the lightweight fuel cell has already been built by the team and they expect the mini-helicopter to take off with it later next year. CEA Liten in France has also announced a thin film fuel cell.
Metamaterials are nano-patterned films and other structures that bend the radiation targeted, be it light, infrared, terahertz or microwaves. They will lead to many previously impossible optical and electronic components so funding is increasing for work on these exciting new components. In addition to ongoing work at many US and German universities and the pioneering work at Imperial College London UK, Professor Zheludev of the University of Southampton UK has now received substantial funding to work in the arena.
Rapid change in market structure
The market for printed and potentially printed electronics in 2009 is as shown below. However, well within the next decade, it will become predominantly printed and flexible and totally new applications will have opened up including the huge potential for transparent electronics. In 20 years, it will be over $300 billion.
Market for printed and potentially printed electronics in 2009 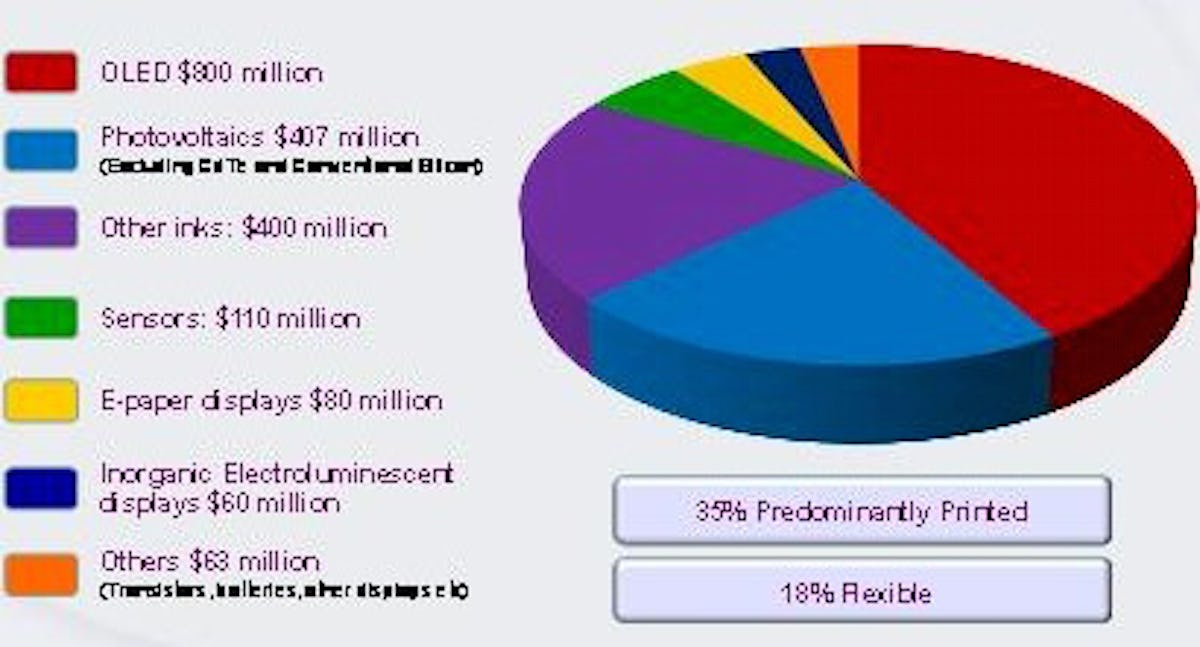 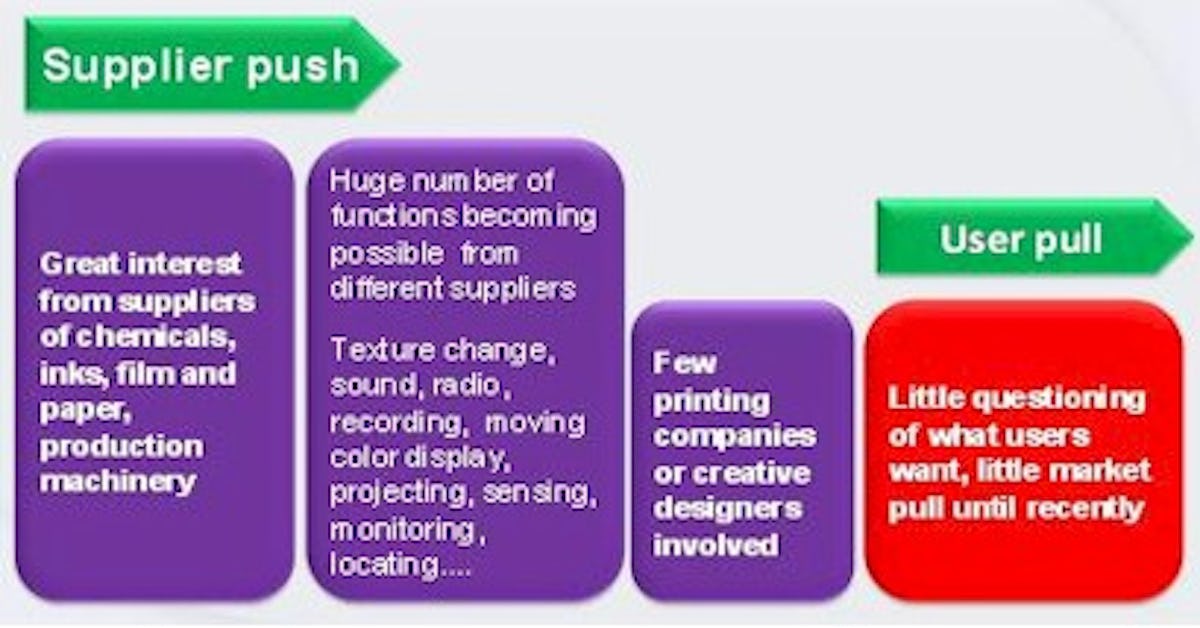