2015928 Dr Guillaume Chansin
Quantum dots have been developed since the early 80's but it is only recently that they made an appearance in consumer products such as TVs and tablet computers. IDTechEx Research has published a new market report on quantum dots titled Quantum Dots 2016-2026: Applications, Markets, Manufacturers, and as part of this study we have looked at their impact on the display industry. Is this the technology that will enable LCD to rival OLED?

The key selling point for quantum dots is that they enable a much wider color gamut with minimal re-engineering of the LCD panels. They do this by modifying the backlight (and to some extent the color filters) inside the LCD stack.
A conventional LCD backlight uses 'white LEDs' which are really blue LEDs with a yellow phosphor. As a result, the white light that is produced has a strong blue peak and much weaker red and green components.
Quantum dots can be used as 'downconverters', the same way that phosphors convert blue wavelength to longer wavelengths. They key difference is that quantum dots have very narrow emission spectra and the wavelength can be tuned by changing the size of the dots. In other words, with quantum dots it is possible to have strong emission peaks in all three primaries: red, blue, and green.
The ideal solution would be to deposit the quantum dots directly on the LED ("on-chip"). But the current generation of materials degrade quickly at high temperature so they need to be physically separated from the chip (future generation materials may enable 'on-chip' thanks to high heat and moisture resistance).
Two workarounds are currently available. The first one is to place a tube filled with quantum dots between the LEDs and the light guide plate. QD Vision is the company commercializing this solution. While the tube can be fitted in large displays, it is not the best solution when it comes to mobile displays. The picture below shows an iMac retrofitted with a tube by QD Vision. 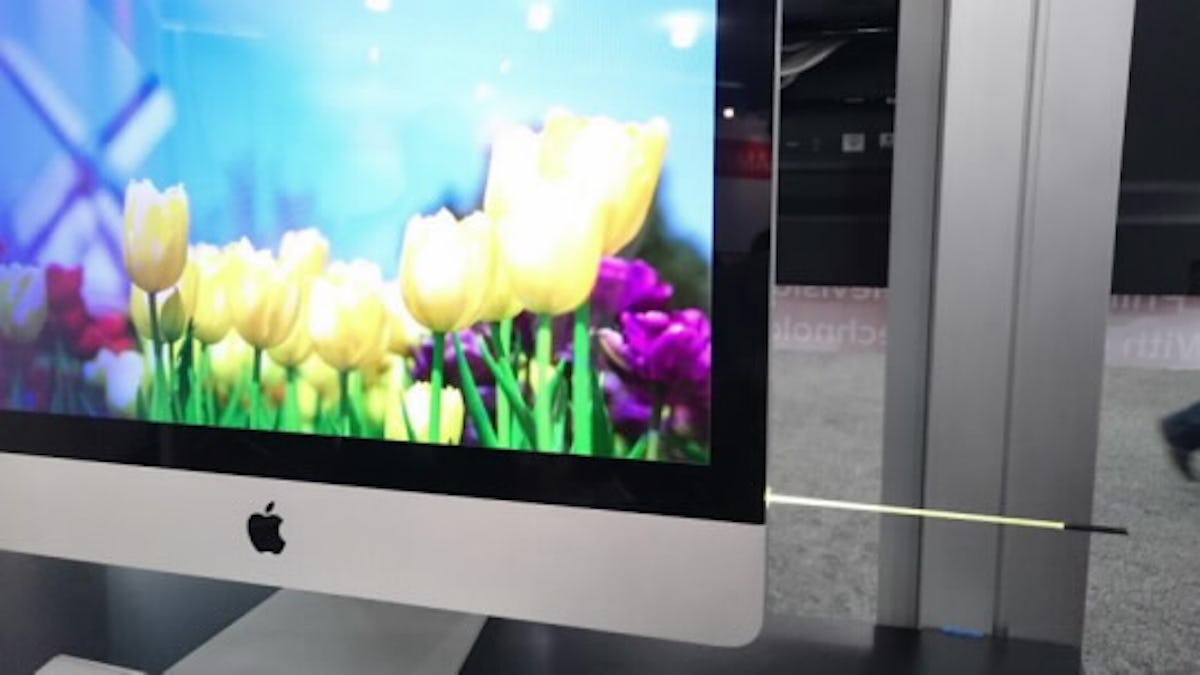 Photo: IDTechEx Research
Back in 2013, QD Vision partnered with Sony to launch the first quantum dot LCD TV. QD Vision has now found more partners, including TCL launching a range of TVs and Philips commercializing the first quantum dot monitor this year.
The other integration option is to add the quantum dots as a film, an approach designed by Nanosys. The company has partnered with 3M to offer a diffuser sheet loaded with quantum dots. Because the diffuser sheet is part of a conventional backlight anyway, the display manufacturers do not need to change anything in the design of the backlight: the 3M solution is a direct drop-in replacement. Amazon was the first customer when it launched tablets with premium displays (the Kindle HDX).

Quantum dots appear to offer a simple way to dramatically improve the performance of LCD panels. But there are some challenges to get the technology adopted.
First, the cost. A quantum dot film can add a significant cost to the display panel. Using tubes from QD Vision is probably more cost effective which is probably why several Chinese TV manufacturers are adopting this solution.
Second, consumers will have to be convinced that it will be worth paying a premium. Supporters of quantum dots say that it is currently the only way to obtain TV displays that are compliant with the Rec. 2020 standard. But while the specifications are impressive, it is worth noting that most consumers are not aware of the limitations of their existing LCD devices (whether TV, laptop, or tablet).
Third, the best quantum dots are made with Cadmium, an element which is usually banned in the European Union under the RoHS regulations. QD Vision and 3M have requested an exception to introduce cadmium in TVs because of the benefits in terms of lower energy consumption (thereby reducing carbon emissions). But some organizations, including Nanoco, are calling for the exception to not be extended. Nanoco supplies indium based quantum dots so would benefit from a complete ban on cadmium. Some are quick to retort that Indium is a potential carcinogen and might also be banned in the future.
While this debate is much needed to fully assess the risks, there is no denying it has also been damaging to the whole industry. Giving quantum dots a bad reputation is not the best way to get the technology widely accepted.
Nanoco has licensed their cadmium-free quantum dots to Dow Chemicals. But the optical performance of these quantum dots is not on par with the ones made with cadmium. The company believes that eventually they will be able to offer a similar level of performance. Meanwhile, Nanosys has also started to produce cadmium-free quantum dots and has licensed their technology to Samsung.

QLED as the next generation OLED?

While the main focus is currently on enhancing backlights for LCD panels, some are already looking beyond. Quantum dots can also be used to make emissive displays. So-called quantum dot LED (QLED) are similar to OLED with an active layer made with quantum dots. 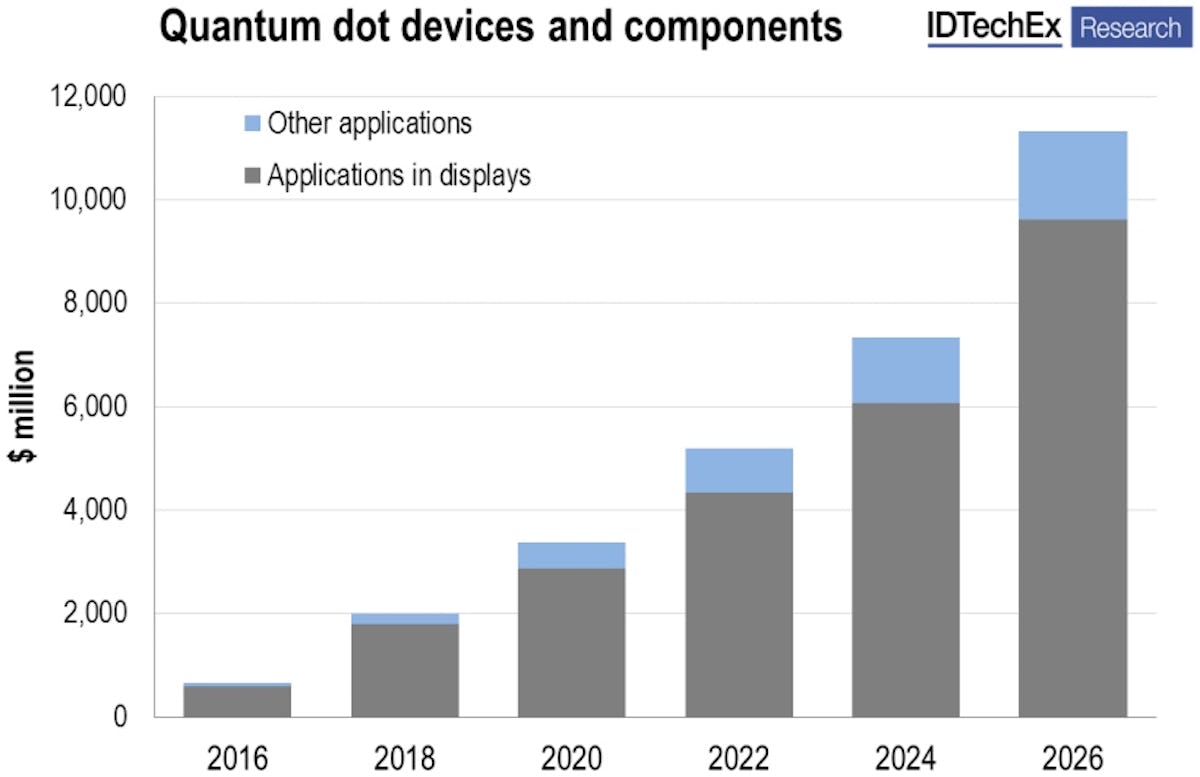 Market forecast for quantum dot devices and components (source: IDTechEx report Quantum Dots 2016-2026: Applications, Markets, Manufacturers)
This technology is still in very early stage but promises to offer the same benefits in terms of color gamut to OLED technology. QLED will in theory provide better colors and efficiency than OLED because of the narrower emission peaks. QLED can be considered as the next generation OLED.
Whether it is for downconversion or ultimately QLED, quantum dots have the potential to significantly disrupt the display industry. IDTechEx Research forecasts that quantum dots will enables a market of devices and components worth over $11bn by 2026, with a large chunk of the revenues in display applications. Quantum dots have already made serious inroads in the industry; don't be surprised to find them in your next TV. For more information, read the full global analysis of the technology and application landscape in the report Quantum Dots 2016-2026: Applications, Markets, Manufacturers) at www.IDTechEx.com/qd.
PrintForwardTweetLikePinredditShare
Previous
Next