Aug 26, 2014 Dr Peter Harrop
The heart of the newly popular Internet of Things (IoT) is internet-enabled sensing nodes. Saying the subject encompasses all wireless networks because they are all candidates for internet enablement at node level is an unrealistic, tongue-in-cheek approach aimed more at reporting large figures rather that identifying realistic new opportunities and technologies. It is true that virtual IP addresses can be created for the nodes in a network that only has internet connection at backhaul but this does not offer sensing or the other main befits of a genuine Internet of Things.
As the extended time scales caused by previously ignored impediments to IoT become clear, IDTechEx believes that the analysts are likely to dismantle their forecasts in the harsh light of day. Nonetheless, opportunities to create billion dollar activities and eventually ten billion dollar activities particularly at the software and services end of the value chain will emerge, primarily for the large companies that will acquire many of the exciting start-ups in these activities creating an excellent investment climate. For example, GE has estimated that process optimisation that leads to just a 1% of savings across multiple industries could be worth a combined $226 billion over 15 years. GE argues that the industrial internet will allow many companies to move towards zero unplanned downtime, whereby preventive maintenance can be undertaken based on the actual condition of industrial assets rather than the estimated condition.
Clearly there is now a proliferation of small projects where the smart object has an IP address (new core IoT business). There is also a proliferation of networks where only the backhaul is connected to the internet but the tags become cleverer eg. emitting signals, sensing and/or self-organising as in mesh networks but not yet with their own IP addresses in use. This is a renaming of much RFID and sensor networks as IoT, rather than a new business opportunity, though Cisco and others are intensely interested in upgrading such networks to IP. Small to large suppliers will benefit from this upgrade opportunity but the work of persuading the owners of such networks that they should upgrade has scarcely begun. Extensive IDTechEx interviews have revealed that widespread user pull is not imminent.
It is very important not to conflate the Internet of People (IoP), which is the established world of mobile phones and other personal electronics, increasingly wearable and strongly dependent on new human interfaces with the highly speculative and unproven concept of IoT which involves little or no human interface. These are contrasted below. 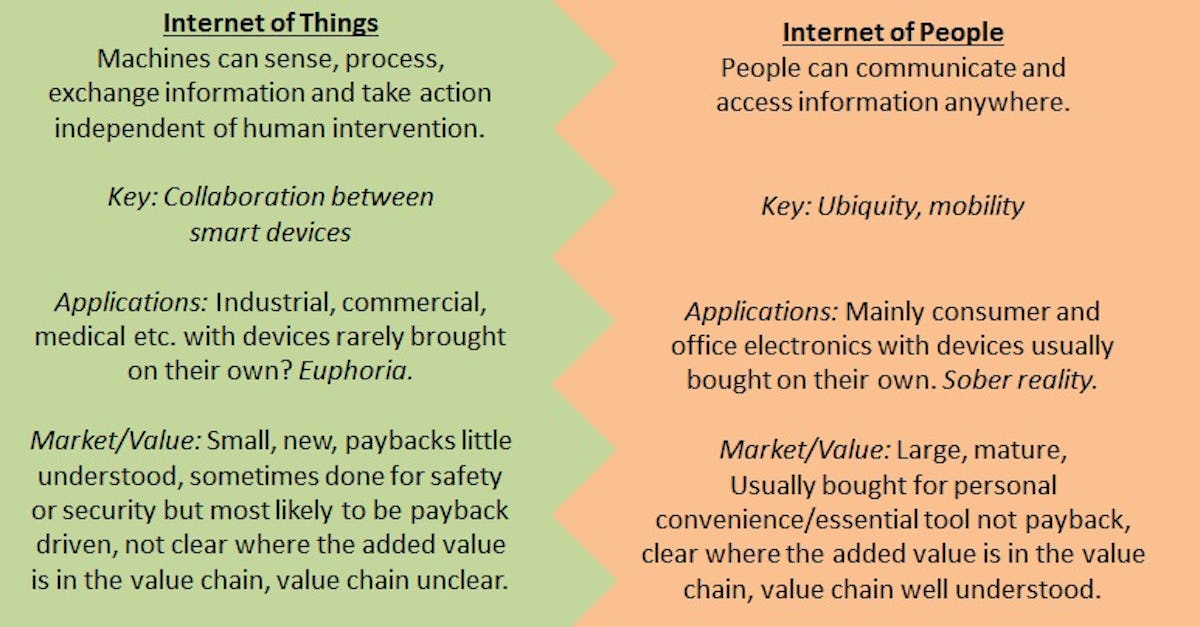 Fig. IoT vs IoP by application, maturity and other factors
Source: IDTechEx
RFID, a market of $11 billion in 2015, is only very weakly related to the new IoT though the term was used for GS1's Electronic Product Code (EPC) based RFID based on dumb tags that cannot sense or even initiate a signal and are certainly not internet-enabled. Only third generation RFID - wireless sensor (mesh) networks (WSN) - approach the smart object definition within IoT and even here, the nodes are not internet-enabled directly with their own IP addresses. Almost none of the $11 billion RFID market is a candidate for internet enablement at tag level in the assessment of IDTechEx in its new report, Internet of Things: Business Opportunities 2015-2025.
On the other hand, there are many mega trends in society that call for something like IoT if only the standards, cost, inter-operability, threat of subverting things in the way viruses subvert data and other impediments can be overcome. The relevant needs include the demographic time bomb (greying of the population) currently severe in Italy, Japan and Russia and due elsewhere soon. That means automated healthcare for patients on the move. There is also the mysterious global diabetes epidemic, new military threats and solutions, advanced informatics and vehicles moving to 70% electronics as they become far more sophisticated, forming reactive and anticipatory networks.
For more information read Internet of Things: Business Opportunities 2015-2025 and Internet of People: Technology 2015-2025 and also attend the IDTechEx event Internet of Things Applications USA 2014.
PrintForwardTweetLikePinredditShare
Previous
Next