Nov 12, 2015 Dr Harry Zervos
Flexible electronic devices are starting to experience significant proliferation, with more and more devices with innovative form factors being brought to market, from small components such as disposable sensors that have been in the market for quite some time now, all the way to new flexible smart phones currently being demonstrated by consumer electronics giants like Samsung and LG.
While printing technologies enable lower manufacturing costs and superior performance in many applications, vacuum deposition still claims significant market share in flexible electronics, although sometimes a combination of both can be the ideal combination.

From test strips to OLEDs

Glucose test strips are a great example of the prevalence of both printed and vacuum deposited devices. Over ten billion test strips are being manufactured worldwide, in order to cater for the needs of the ever-increasing number of people living with diabetes. Although each manufacturer/brand has its own technology and design, the following cross-section shows the key parts of a test strip. Manufacturers follow both thick film (screen printing) and thin film (sputtering) techniques for depositing the circuit in test strips, each of the techniques with its own merits. 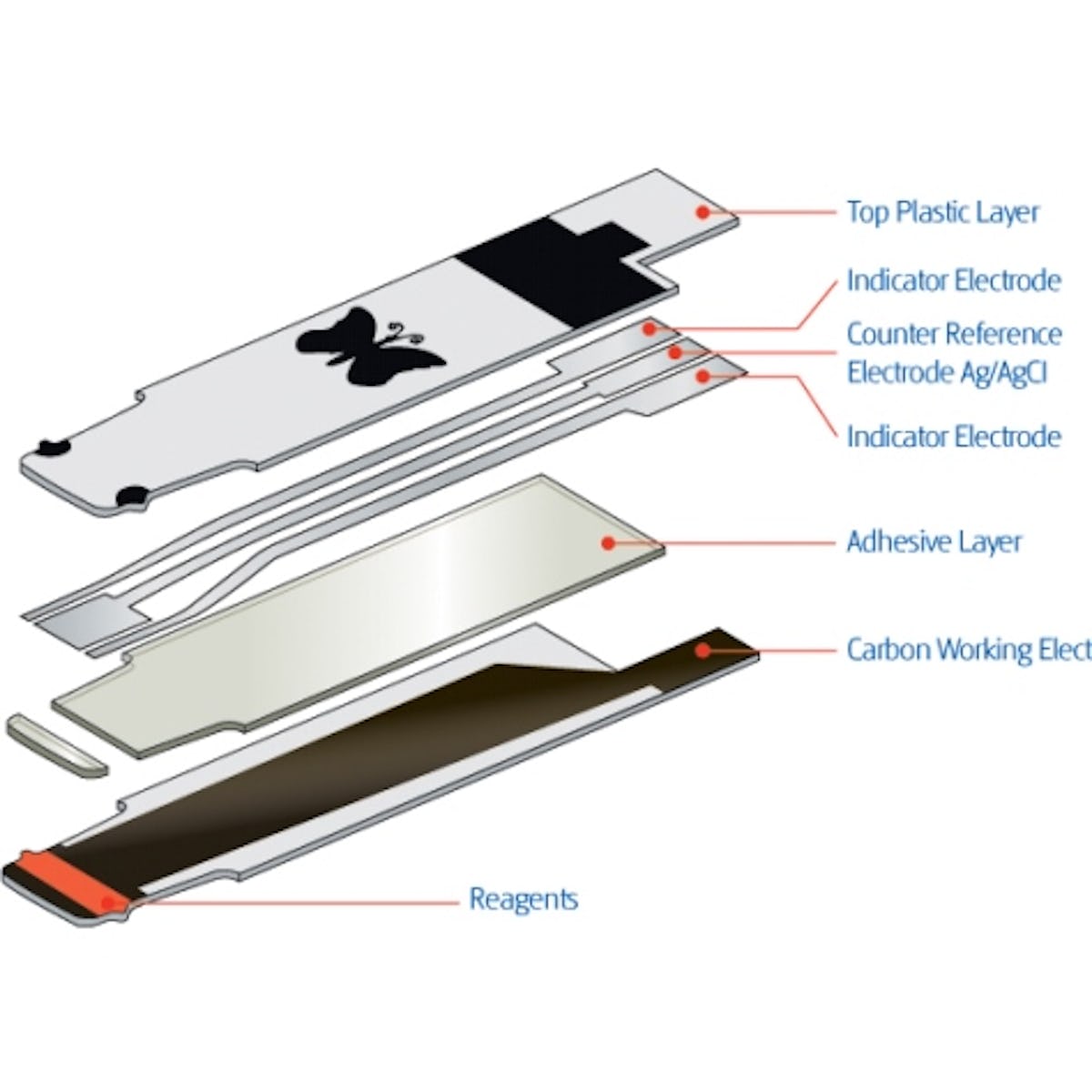 Cross section of a glucose test strip. Source: Abbott
Screen printing technology involves printing patterns of conductors and insulators onto the surface of planar solid (plastic or ceramic) substrates based on pressing the corresponding inks through a patterned mask. Each strip contains printed working and reference electrodes with the working one coated with the necessary reagents and membranes, with the reagents commonly dispensed by ink jet printing technology and deposited in the dry form. With thin film deposited electrodes, sputtering or laser ablation is commonly utilized. Lifescan for instance, a Johnson & Johnson company, mostly prints electrodes whereas Roche utilizes laser ablation in its Indianapolis plant. Along with the very specialized organic materials utilized in assays in the actively sensing part of the test strips, advanced devices integrating thin film technology utilize gold nanoparticles and mesoporous Pt electrodes, and even the use of carbon nanotubes and graphene has been demonstrated in certain designs.
OLED displays are a good example where the advent of printing techniques is meant to bring about much larger displays, manufactured at lower costs but for the time being, the OLED industry makes displays that are almost exclusively vacuum evaporated. Optimized solution processed materials are also becoming available but for now, vacuum deposited options perform better. Sunic, Aixtron, Canon Tokki and ULVAC are some of the companies that actively design and market equipment and materials for industrial vacuum technology in OLED applications.
Most of these companies, along with others such as Applied Materials are active in making more than just the active OLED layers, providing equipment for TFT deposition, encapsulation, etc.
The opportunity here is significant: The OLED market is meant to reach over $50bn in the next decade, with flexible and rigid plastic OLED displays surpassing 16 billion by 2020. 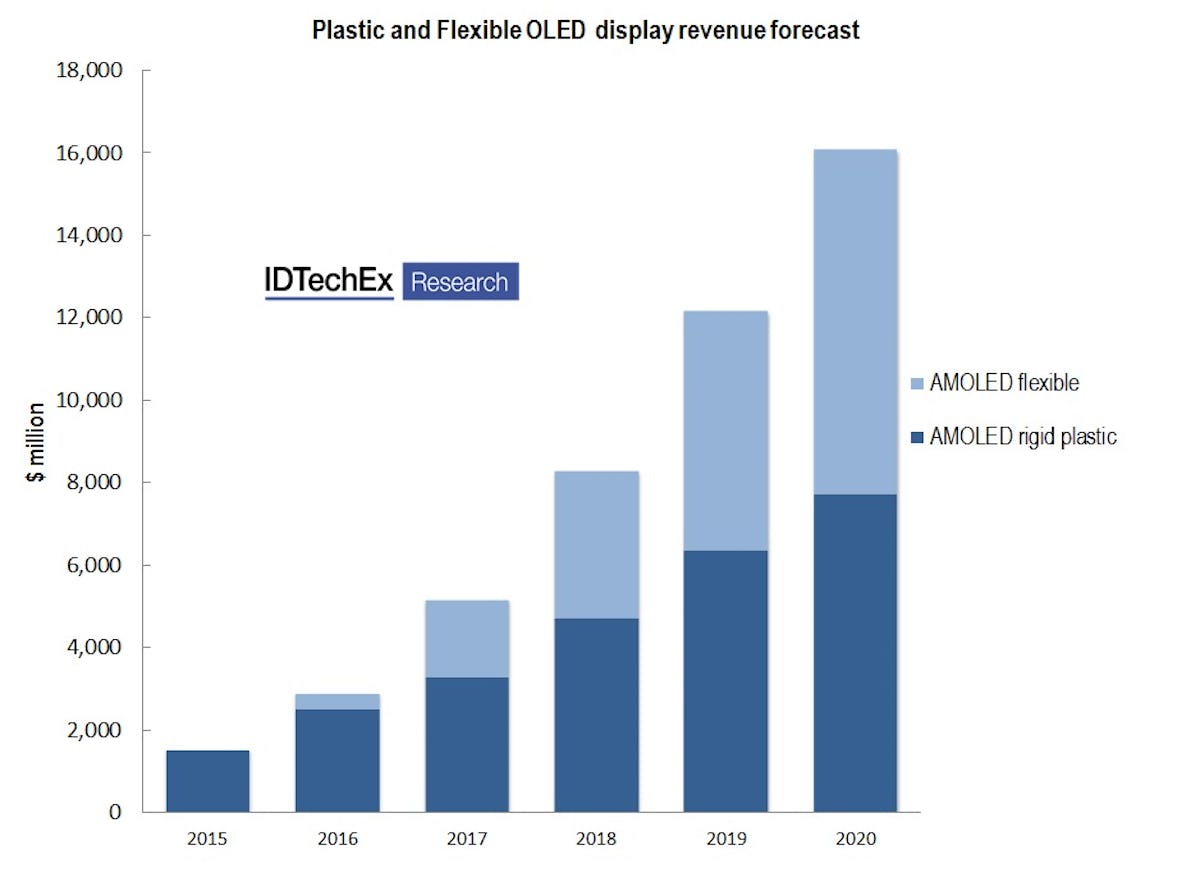 Encapsulation of flexible versions of OLED displays is set to become an exciting market: flexible barrier films - whether utilizing CVD or PVD processes or even in cases when ALD is utilized to make high quality, defect free layers- are hugely benefiting from vacuum deposition techniques and have created encapsulation materials that can reach the water vapor transmission rates required to allow flexible OLED displays the necessary lifetimes required to become commercially viable. Encapsulation for flexible OLED devices is a market that is expected to reach almost $340m by 2022 according to IDTechEx Research in the report Barrier Layers for Flexible Electronics 2016-2026: Technologies, Markets, Forecasts.
Flexible versions of thin film photovoltaics also require stringent encapsulation, but thin films have had harsh competition from low cost crystalline silicon cells from China, that have significantly reduced their market share in recent years. Just over 7% of the overall market for PV this year is expected to be thin-film based, according to research from SPV Research.
It is interesting to point out that manufacturing of all thin films for solar cell applications is fully vacuum based: PECVD for amorphous silicon platforms, sputtering or co-evaporation tends to be the preferred deposition techniques for CIGS technologies while CdTe leader First Solar has developed and optimized its own unique vacuum deposition technique, High Rate Vapor Transport Deposition (HRVTD). In this process, co-developed with NREL in an effort that started back in the early 1990's, the material to be deposited is carried on a gas stream in powder form, then heated and vaporized as it passes through a membrane before depositing on a glass substrate. The technology can deposit a thin uniform layer of CdTe (or CdS, a common material system used as a buffer layer in CdTe cells) on 8 square feet of glass in less than 40 seconds, a deposition rate much higher than other rival thin film solar technologies that proved to be key in First Solar's success in improving yield and output and consequently lower production costs for its thin film solar cells.

The conclusion is simple: commercializing flexible or printed electronics will invariably require a deeper understanding of vacuum deposition technologies. Printing techniques are not the only manufacturing option that can allow for the freedom in design that the advent of flexibility in form factor is ushering in. In fact, vacuum deposition technologies are currently enabling the proliferation of a wide range of components and devices, from encapsulation films to thin flexible batteries to transparent conductive films and backplane elements. In many cases, having reached economies of scale, vacuum deposited devices have reached attractive cost structures that make it harder for printed versions to compete, having to "dig deep" in order to bring forward additional selling points than just reductions in cost.
Printed Electronics USA 2015 taking place in Santa Clara, CA on the 18th and 19th of November this year is going to focus on the importance of vacuum deposition, with both the conference as well as the trade show featuring contributions from end users, device manufacturers and manufacturing equipment suppliers of vacuum deposition technologies.
PrintForwardTweetLikePinredditShare
Previous
Next