Aug 01, 2013 Dr Peter Harrop
This article shares some of the research in the new IDTechEx report, "Mobile Phone Indoor Positioning Systems (IPS) and Real Time Locating Systems (RTLS) 2013-2023" (www.IDTechEx.com/ips). Indoors, satellite navigation is largely inoperative so mobile phone IPS has been invented. Indeed, the market needs envisaged for IPS are sometimes more ambitious than those addressed with satellites outdoors. The main focus is inside large buildings where 3D capability and sensing are more desirable than is the case outdoors. IPS is likely to become a bigger business than outdoor satellite-related services. After all, people spend about 85% of their time in buildings.

The potential uses of IPS/RTLS are boosted by many societal trends including:
• Increased violence in hospitals
• Demographic timebomb - the ageing of the population past the point where present care regimes can cope.
• Determination of the next generation of elderly to stay mobile
• Tougher laws and regulations
• Increasing intolerance of delay - for example, the desire to be navigated in the car to the empty parking spot in the building and from that, on foot, to destination.
• Determination to have a higher level of service - for example, is the skirt I wish to buy in store right now and exactly where is it?
• Demand for greater security and safety from preventing theft of art works to improved emergency services. It even includes a desire for real time structural health monitoring in buildings using embedded sensor that must indicate position.
• Facilitation - airports are the world's most visited buildings and managing the movement of passengers, staff and buildings has to radically improve both to avoid gridlock and to reduce costs and journey times.
IPS usually involves a person holding a mobile phone in order to navigate and receive position-related services in real time such as the state of each queue in a theme park and even involving virtual queuing linked to timed navigation. Its primary objectives are global ubiquity and best availability before accuracy and privacy, being open to all approved service providers. Mobile phones are taken all over the world.

The most favoured IPS technology in development provides location from radio mapping, "fingerprinting" of WiFi emitters and emissions, something usually expensive but now automated with the CSR systems. Analysis usually involves the low cost but crude received signal strength method. Where necessary, WiFi location for IPS is enhanced by inertial navigation using the accelerometers, gyroscopes and, for height, recalibrated barometers already fitted in many mobile phones.
On the other hand, RTLS, which is increasingly subsumed by IPS to improve its accuracy and granularity, traditionally involves high-security closed systems. The most favoured RTLS technologies include dedicated, non-standard systems mainly, but not exclusively for indoors where the system knows tag location not a mobile phone. Accuracy and availability usually have priority over ubiquity with RTLS and accelerometers and gyroscopes for inertial navigation are not usually available so fixed "beacons" are typically employed with a variety of basic positioning analysis used such as "time delay of arrival" together with "angle of arrival", the system even using ultrasound or infrared with RFID as appropriate. Of concern for both IPS and RTLS is the concentration on 2.4 GHz band where these, the emerging Internet of Things and existing systems from microwave ovens to WiFi and Bluetooth threaten saturation and excessive interference and various work-rounds are emerging, others being more relaxed (too relaxed?) saying, "Cisco will solve it somehow, because it has so much to lose if it does not."

With IPS, a mobile phone or similar device knows its location and that of targets the operator seeks such as the correct underwear in a store and the next objective is to know position - attitude and line of travel. Sometimes the targets have radio tags with sensors, so one may know, for example, which part of a building is on fire and which exits are blocked, necessarily in real time. Indeed emergency services are very interested in such technology which leapt into prominence in 2012 but is still largely in the realm of development rather than deployment.
The term IPS does not encompass all indoor positioning systems or even all indoor locating systems - it is mobile phone centric. Both operate in real time or thereabouts. In contrast, real time locating systems are islands of automation for specific indoor and outdoor challenges in locating tagged things and people using a computer system and deployed radio tags, not a mobile phone. They usually gather richer data more securely, requiring considerable computer analysis and storage and varied and complex presentation, though location-based information presented on a mobile phone is now becoming sophisticated as well. RTLS gained widespread interest earlier - from 2004 (Google Trends).

IPS is only now starting to be widely deployed commercially and Google, Apple, Nokia and Microsoft are fighting for the business of tens of billions of dollars in chips, software, services and infrastructure that will result, with minimal sales as yet. By contrast, Hewlett Packard has recently gained an RTLS order for $543 million from the US veterans' hospital group with IBM the unsuccessful bidder. This order was 100 times the size of the previous record order for RTLS.

The reason why we analyse both lies in the fact that they are converging. Just as the human being has a "whole that is greater than the sum of its parts" therefore so-called sensor fusion will provide enormous intelligence and ubiquity to indoor information and services. In our latest interviews, CSR (previously known as Cambridge Silicon Radio), Redpath Systems and Ubisense have passionately argued that IPS and RTLS are merging with mapping though a substantial market for RTLS, for example for staff and assets in hospitals and for assets in manufacturing and logistics, will continue without impinging on mobile phone services the huge Hewlett Packard order being an example of this. Nonetheless, only 5% of the 105 IPS and RTLS companies surveyed by IDTechEx for the new report are, as yet developing both.

A linked subject is tracking things as they travel, something often done today by occasionally recording where they are, such as when they pass a fixed RFID reader. This report is not about this first generation RFID but it does concern itself with next generation improvements on this, RTLS being second generation RFID and Wireless Sensor (mesh) Networks (WSN) being third generation and also involving location.

The market for RTLS will grow to over $4.3 billion in 2023. This is relatively easy to estimate by looking at the technological roadmap and new business to be made possible over the coming decade and checking against past trends for these distinct islands of automation and associated network services, facilities management upgrades and the like. Not so for IPS where WiFi location employs infrastructure also used for other purposes and inertial navigation uses devices such as pre-existing gyroscopes in the phone. As with RTLS, IPS will mainly earn money from associated services, but such is the frenzy of innovation both in function and use, predicting the value market is virtually impossible at this early stage.
Fig 1. Forecast of global RTLS market by value in US$ millions for the next three years* 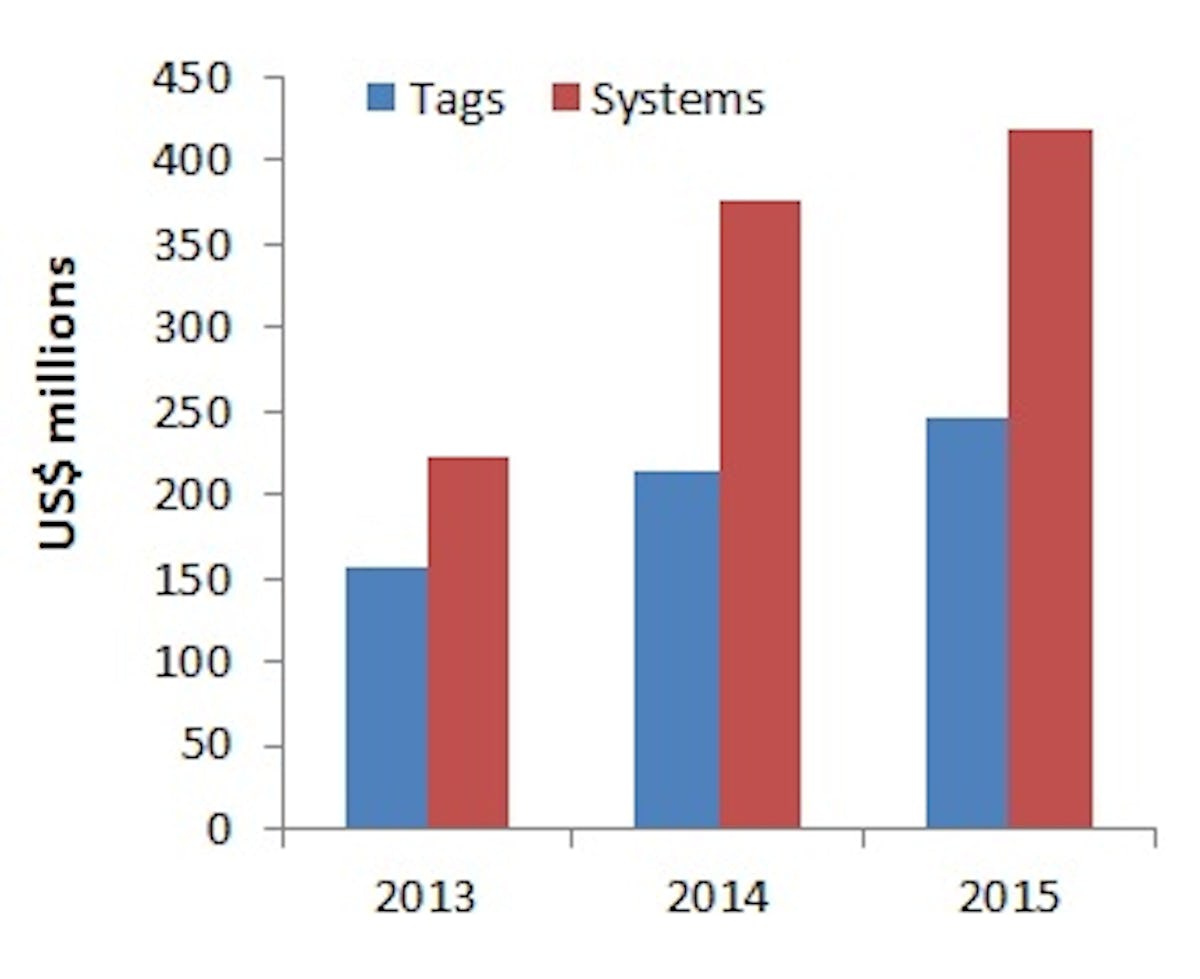 Axcess International, a leading RFID/RTLS system supplier puts it this way:
"Across the globe and among many industries active RFID/RTLS technology has evolved far beyond the days of barcodes in retail. Lives are being saved, businesses are innovating at the speed of light, and automation of everything has become the de facto standard. RFID/RTLS technology and sensor networks are delivering critical data in multiple types of environments far beyond the enclosed, wired limitations of yesterday.
U.S. businesses absorb $40 billion per year in lost productivity and increased costs because crucial process and environmental data is not effectively captured and analyzed. Fortunately, that is changing. With the innovation of RFID/RTLS technology and wireless sensing capabilities, you can automatically relay real-time information that was previously unattainable and use it to improve efficiencies, maximize security, and minimize risk."
However, even that view is not the whole story as we move towards the mobile phone being used for almost anything and the technologies of IPS and RTLS encompassing everything from security of priceless artefacts in museums to enhancing everyday life in most of its forms.

The new report Mobile Phone Indoor Positioning Systems (IPS) and Real Time Locating Systems (RTLS) 2013-2023 consists entirely of evidence-based analysis following seven years of conferences, masterclasses and reports on the subject produced by the PhD level IDTechEx analysts and team. The main features of the completely new text in 2013, continuously updated, are the following:
• Ten year forecast of the RTLS market 2013-2023, platform hardware vs system integration/services.
• Full explanation of what IPS and RTLS are and how these technologies are evolving and converging.
• Comparison of 105 organisations in the IPS/ RTLS value chain.
• Comparison of 74 case studies of RTLS, many in 2013, with many pie charts presenting the lessons arising.
• Detailed original interviews carried out from mid-2013 with important organisations in this space.
• Glossary of the challenging jargon, which is different between IPS and RTLS yet often refers to the same or similar things.
For more information see www.IDTechEx.com/ips.
PrintForwardTweetLikePinredditShare
Previous
Next