Why Driving Will be Outlawed by 2050

Why Driving Will be Outlawed by 2050

Aug 31, 2021 Dr James Jeffs
Autonomous cars will match or exceed human safety by 2024, after which they will grow rapidly at a CAGR of 30% finds IDTechEx's new report "Autonomous Cars, Robotaxis & Sensors 2022-2042". By the 2040s, they will be capable of fulfilling the world's mobility needs without a single collision. So why should humans be allowed to continue driving? 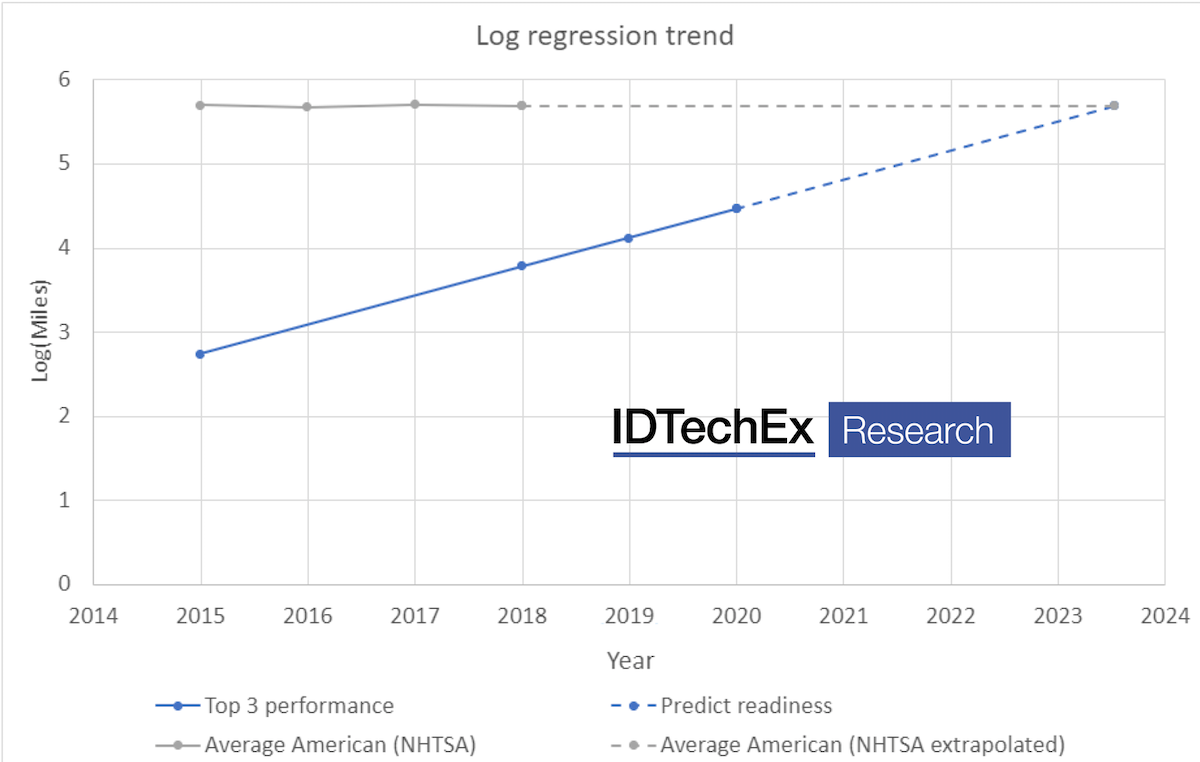 Log regression trend. Source: IDTechEx analysis of California DMV and NHTSA data
For a long time, the parameters around how we can drive our vehicles have been restricted. Speed limits exist to increase safety, seatbelts are mandated to increase safety, and city centers are becoming pedestrianized to increase safety for pedestrians.
An example is Barcelona, Spain, where super-blocks exist to create large car-free areas. These areas are not only safer for pedestrians but also improve local air quality and create a greener, more pleasant space within the city.
In other cities, clean air zones are already controlling the type of vehicle allowed in cities. As the maturity of autonomy increases it is conceivable that these zones could become autonomous-only, to improve inner-city pedestrian safety, then rolled out to entire cities, mandating that travel inside the city may only be conducted by autonomous drivers.
Eventually, manual driving could become completely illegal on public roads in the interest of safety. This is not to say that manual driving will completely disappear but may be relegated to a sport, reserved for racing and track days.
Imagine being pulled over by the police with a car full of people not wearing seat belts, the police officer says, "if you crashed, you could have killed someone". Now the same scene but instead of not wearing seatbelts you are operating a vehicle manually in an autonomous-only town center.
The assumption is that the technology will save lives and not using it is criminally negligent. Would this progression be so unusual? Technology has always caused changes to the laws on how we operate vehicles; as vehicles became faster, speed limits were introduced. When mobile phones emerged their use in vehicles had to be outlawed; as autonomous drivers outperform humans will we be banned from driving altogether?
The IDTechEx report covers safety and regulation, a key barrier for adoption. One trend identified is with vehicle safety certifiers mandating higher levels of automated safety, and the inclusion of sensors such as radar. An example is Tesla losing its top safety rating from the NHTSA when they removed radar from the Model 3 and Model Y in May, which ironically, improves the system, according to Tesla.
Autonomous drivers are constantly aware, never distracted by mobile phones, other drivers, or other such things which can occupy a human's attention. Autonomous vehicles will be connected with 5G and receive more information about their surroundings than human drivers could ever see or process.
There is a good reason that computers are so ingrained into our everyday life, they can deal with more data than we can, they process it faster, and they do not make mistakes. The difficulty, of course, is certifying that given the responsibility of driving, the last of these advantages is maintained and that the public has confidence in the technology.
Why 2050? IDTechEx has analyzed autonomous disengagement from the California DMV, which reveals the maturity of current autonomous testing. The top players such as Waymo and Cruise are currently traveling ~30,000 miles between disengagements, a number increasing by a factor of 2 each year.
If this growth is sustained, by 2046 autonomous vehicles will meet the total mobility demand of the US (3 trillion miles) without a disengagement. By 2050, they could meet the world's transportation needs with fewer than 1 collision per year. Should humans be allowed to continue driving when we cause millions of injuries and hundreds of thousands of fatalities in car crashes each year? No, driving will be outlawed.

IDTechEx is actively researching MaaS and autonomy and has just released an updated report "Autonomous Cars, Robotaxis & Sensors 2022-2042". For more information on this report, please visit www.IDTechEx.com/autonomouscar.
This research forms part of the broader mobility research portfolio from IDTechEx, who track the adoption of autonomy, electric vehicles, battery trends, and demand across land, sea and air, helping you navigate whatever may be ahead. Find out more at www.IDTechEx.com/research/EV.
IDTechEx guides your strategic business decisions through its Research, Subscription and Consultancy products, helping you profit from emerging technologies. For more information, contact research@IDTechEx.com or visit www.IDTechEx.com.
PrintForwardTweetLikePinredditShare
Previous
Next