2017年11月29天 Dr Richard Collins
Ceramic Metal Composites (CMC) and Metal Matrix Composites (MMC) are not new concepts, but they have never reached their potential. To date, a wide range of particles and whiskers have been used in these matrices, but the advantages have been questionable, applications limited, and manufacturing challenges difficult.
One of the most successful use of CMCs to date are as the brakes for aerospace, which have very high strength, durability, and heat resistance. To include the SiC matrix into the network of short fibres, a gas infiltration method is used, but it takes multiple weeks to complete each part.
Continuous ceramic fibres have started to come to the fore in recent years, predominantly through the emergence of Nextel (Alumina), from 3M, and Nicalon (SiC), from NGS Advanced Fibers. These have overcome many of the manufacturing challenges as well as the interfacial coating post-production, which is very important for creep-rupture resistance and environmental protection. Continuous ceramic fibres undoubtedly give the opportunity for high performance composites, and this article will highlight some of the key projects and players for CMCs and MMCs.
IDTechEx have carried out primary-interview based market research and forecast that the use of these fibres is at the start of its boom. Continuous ceramic fibres are anticipated to have a CAGR of over 27% for the next 10-year period, for more analysis on this sector as well as a complete technical supply chain analysis, company profiles, and detailed market forecasts see the report - Composites 2017-2027: Innovations, Opportunities, Market Forecasts

CMC - on the cusp of significant growth

The main advantage for CMCs are increased strength and durability in high temperature environments. The greatest interest is surrounding the use of SiC/SiC in replacing nickel alloys in jet engines, not only are the CMCs lighter (33%), but the higher temperature stability means that cooling air does not need to be channelled to the hottest areas making the engine more efficient (15%).
General Electric have been a large driver in this field as part of their joint venture with Safran and Nippon Carbon to form NGS Advanced Fibers. They have recently announced a dedicated manufacturing site capable of producing SiC fibres for their future jet engine needs.
Ox/Ox are another prominent type of continuous fibre CMC and have key roles to play in aerospace gas turbines, particularly for the exhaust nozzle. A CMC acoustic nozzle developed by Boeing as part of a collaborative project bought about a 20% weight reduction relative to titanium and operated above 1500 °F. Composites Horizons have invested significantly in this area and started delivering products to General Electric in 2014, this was initially for a Passport 20 engine. 3M are also working on reducing the cost of their Nextel products by increasing the denier, in much the same that a heavy tow carbon fibre is much cheaper than their initially produced lighter tow counterparts.
The market report finds that CMC applications are not limited to aerospace engine applications, in fact some of the earliest application to date has been in missiles for SiC/SiC and industrial furnaces for Ox/Ox, but other potential activities include: hot gas ducts, land based-gas turbines, and solid oxide fuel cells, looking further ahead they could play a crucial role in satellites, commercial spaceflight and within the nuclear industry. All these applications provide CMCs with a great scope and are outlined along with the main players and manufacturing challenges in the new report from IDTechEx. See www.IDTechEx.com/composites

MMCs have had a long fluctuating history with peaks of hype and long troughs, the most common criticism being that the improved performance does not outweigh the cost. Ceramic particles have been most commonly used with mixed results, and the greatest successes have all come from parts that have specific wear resistance or CTE requirements. There are exciting research developments and emerging companies surrounding the use of nanoparticles that could allow particle MMCs fulfil their potential.
Continuous fibres in MMCs significantly lag behind their CMC counterparts. Nevertheless, there are still some significant projects underway and although this is still in an early stage it is anticipated that this could become a key area. The opportunities for MMC will arise from both following the growth of CMCs and as specific industry demands increase, but the prejudices faced over many false starts will make this challenge all the harder for an emerging material.
Composite Metal Technology (CMT) have partnered with 3M to make use of their Nextel fibres in forming continuous fibre reinforced aluminium matrix composites (CFR-AMC). This is done using an advanced liquid pressure forming process and CMT have shown the potential for this by manufacturing an automotive suspension upright prototype with a CFR-AMC insert in collaboration with Jaguar Land Rover; this was 30% lighter, 30% smaller and 20% stiffer than the original component (image below).
Unlike the ceramic fibre tows discussed so far, there is an alternative form called monofilaments; these are individual fibres consisting of a ceramic coating around a core material (Usually C or W) and are often viewed as irrelevant. The immediate downsides are flexibility, increased density, and sometimes temperature limitations due to unwanted reactions. However, there are still several property improvements for the metal part and importantly during the manufacturing the fibres can be spaced, which allows for relatively fast matrix infiltration and prevents the weaker spots arising from interfilament bonding. Monofilaments also have a small maintained interest in CMCs, the key advantage here being their unmatched creep-rupture resistance.
If a large adoption for MMC using monofilaments is to happen it is expected to be within aerospace landing gear, where the compressive strength of CFRP cannot quite cut it to replace the metal incumbent. The pay-off is immediately worth it, landing gear can make up 3-5% of an aircraft mass and switching to a monofilament MMC can reduce this by 30-40%. There has already been an example to date on the Royal Netherlands Air Force F-16, but our interview program suggests no high commercial output is expected anytime soon. 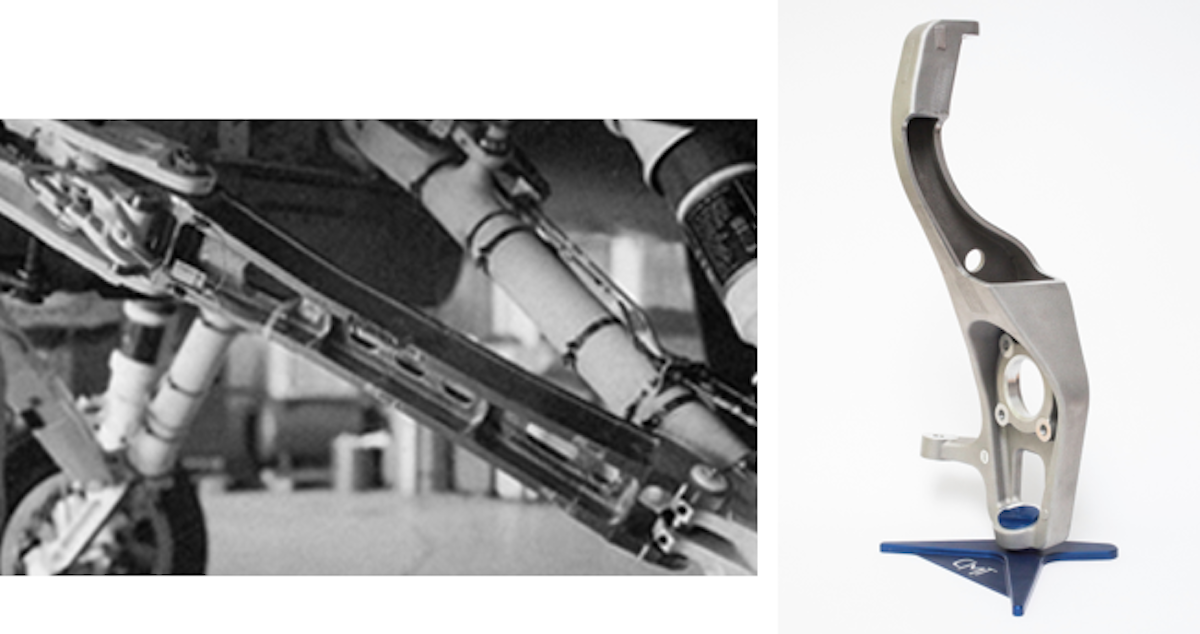 So why is this growth starting now?

Most of the early adopters of CMCs have long qualification periods and have not previously had high pressing demands, but as commercial products emerge the chicken-and-egg cycle of scaling without customers has been broken and this will allow this industry to finally expand. Later applications will not need the same cycles of vigorous testing and can be bought to market quicker, which will help enable this rapid growth.
Looking even further ahead there may still be more underlying changes to come in both the manufacture of fibres and parts. The manufacture of continuous SiC tow is done via a traditional polymeric precursor and spinneret process, but there is a promising alternative method - Laser Chemical Vapour Deposition (LCVD). This is still at a very early stage and championed by Free Form Fibers, but with the market expansion it could quickly gain traction. LCVD provides a route not only into stoichiometric ceramic fibres, but also nascent materials such as pure boron, multifunctional or multiple-coated fibres.
Continuous ceramic fibres have the highest growth of any synthetic fibre used in a composite part, but the whole industry is a long way from being a closed book. Previous articles have highlighted the many downsides and opportunities for composite materials.
For more information on all these applications, processes, players, and forecasts as well as key comprehensive company profiles visit www.IDTechEx.com/composites
Top image source: GE Newsroom
PrintForwardTweetLikePinredditShare
Previous
Next