2015年12月15天 Dr Guillaume Chansin
Ever since Sony launched the first television with quantum dots in 2013, these highly engineered materials have been back in the spotlight. In the new report Quantum Dots 2016-2026: Applications, Markets, Manufacturers IDTechEx Research forecasts that shipment of quantum dots will increase significantly in the next ten years.
Quantum dots are nanocrystals of semiconductor. What makes them so attractive is that their optical properties can be tailored for various applications. Inside a TV, they help deliver colours that are more faithful to the original image.
It took a long time for quantum dots to reach large scale commercialisation. The first start-up, Quantum Dot Corporation, was founded in 1998 to develop new bio-molecular markers. The idea was to use quantum dots to replace the fluorescent tags often used in life science. When the company was acquired in 2005 by Invitrogen (which is now part of Thermo Fisher), it looked as if quantum dots were ready for the big time. However, they never became mainstream in life science, due in part to the fact that they were very expensive. Today, quantum dots are used in research labs to develop advanced sample imaging.
Other companies believed quantum dots were the ideal materials to improve colours in display and lighting. In 2009, Nexxus Lighting commercialised the first LED lightbulb with quantum dots. But the world was not ready to switch to LED lighting and the product was quickly discontinued. The future of quantum dots looked uncertain, so when Sony adopted the technology in their LCD TV it gave a strong confidence boost to the industry.
There are now several models of TVs and monitors based on quantum dots on the market. Most notably, Samsung has bet on quantum dots to compete against the OLED TVs from rival LG.

Fig 1. Samsung is heavily promoting a range of top end TVs made with quantum dots. Photo source: G. Chansin.
Applications in display panels are now driving the sales of quantum dot materials. According to the IDTechEx forecast, demand for quantum dots will grow from less than 100 kg in 2015 to over 2 metric tons in 2026, which is more than a 20-fold increase. Components for LCD will remain the biggest market segment but other applications will emerge, such as quantum dot LED (QLED), photovoltaic, and sensors.
QLED is a promising technology which uses quantum dots as electroluminescent materials, in much the same way as OLED. However, it will take several years for this technology to be commercialised. Applications in image sensors may come to market much faster. InVisage has developed a way to deposit quantum dots on a silicon chip to make hybrid CMOS image sensors. The start-up company has recently announced their first product, a 13 megapixel image sensor for mobile devices.
In Quantum Dots 2016-2026: Applications, Markets, Manufacturers IDTechEx Research finds that the market for quantum dot devices and components will grow to over $11 billion by 2026. 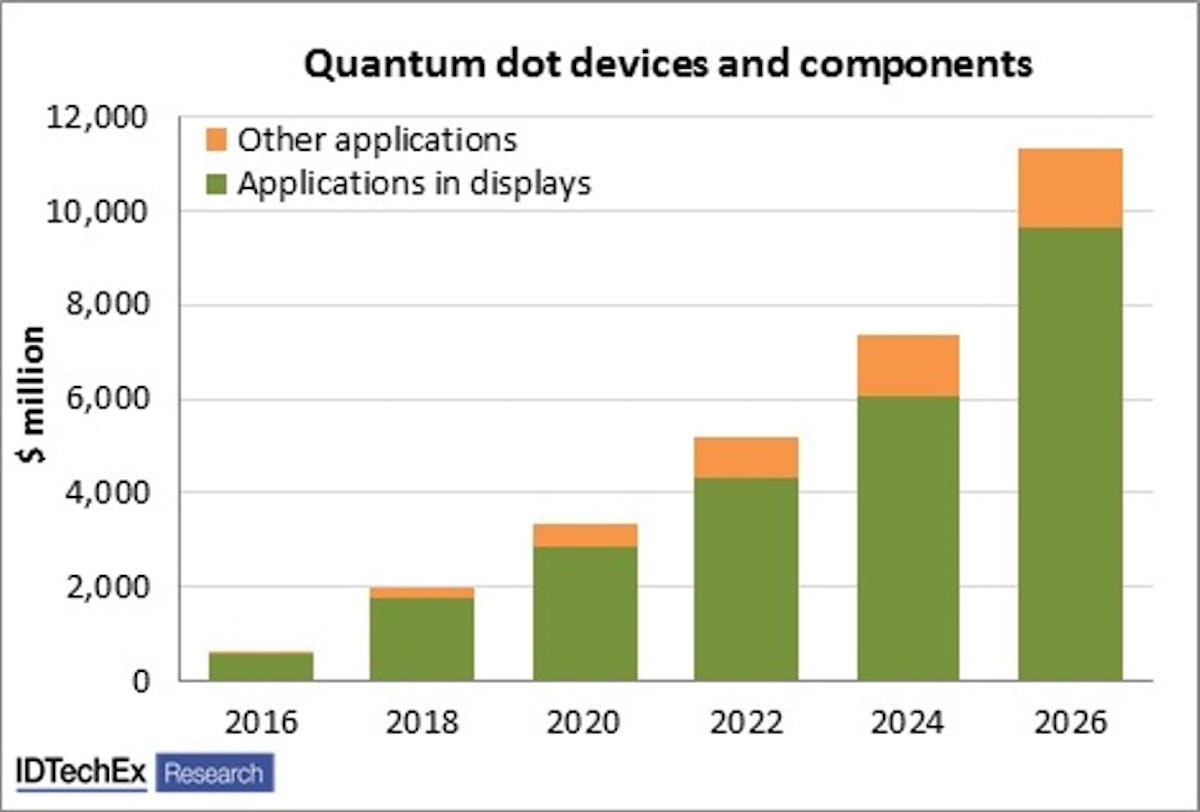