Emerging Technologies Set to Shape Next Generation of Plant-Based Meat

Emerging Technologies Set to Shape Next Generation of Plant-Based Meat

2021年7月20天 Dr Michael Dent
Plant-based meat has increasingly been making headlines in recent years, as product sales swell and industry investment continues to reach dizzying heights. Alongside growing consumer awareness around the issues facing the global meat industry and the perception of plant-based meat as a healthy, sustainable alternative, the growth of plant-based meat can be attributed to the latest generation of new, high-quality products.
However, this is only the beginning. Plant-based meat producers are increasingly looking towards a range of emerging technologies to create the next generation of hyper-realistic plant-based alternatives. "Plant-Based Meat 2021-2031", a new report by IDTechEx, explores the technologies that are shaping the plant-based meat industry, alongside the consumer and market factors that will decide whether plant-based meat can truly disrupt the $1 trillion global meat industry.
Although plant-based meat alternatives have existed for a long time, they have historically been targeted at vegetarians and vegans, who may be happy to sacrifice product quality for ethical reasons. However, to truly make an impact on global meat consumption (as well as accessing the huge market opportunity that comes with it), plant-based meat producers must target the 95% of consumers who do eat meat. Although these consumers are increasingly looking to reduce meat consumption for health and sustainability reasons, they are less likely to tolerate a drop in product quality - targeting these consumers requires companies to make plant-based products that are almost indistinguishable from the real thing.
Based on this thinking, modern plant-based meat companies such as Beyond Meat and Impossible Foods have invested heavily into R&D and technology development to make their products as realistic as possible. Impossible Foods uses a genetically engineered strain of yeast to produce soy leghemoglobin, a key ingredient that makes its meat substitutes "bleed" and gives them a uniquely meaty flavor. To create its Beyond Burger product, Beyond Meat uses a food extrusion machine originally developed at the University of Missouri, which uses heat and pressure to force plant proteins into a fibrous, meat-like texture that resembles muscle fibers. Rather than using genetic engineering to produce its products, the Beyond Meat burger uses beet juice to replicate the bleeding from a real burger. Coconut oil and cocoa butter are used to provide marbling to further replicate the texture of real meat.
This technology development has helped to create a new generation of plant-based meat products that are slowly winning over meat-eating consumers. Now, companies across the world are working to leverage a range of emerging technologies to help create the next generation of plant-based products.
Genetic engineering technology has great potential for producing new proteins and allowing animal animal-free production of ingredients usually derived from animals. Perfect Day is using recombinant technology to insert DNA sequences into microflora such as yeast, bacteria, and fungi, that carry the instructions for producing proteins that are conventionally found in cow's milk, such as casein and whey. This allows the company to create vegan dairy products that contain the exact same proteins as their animal-derived counterparts, creating realistic tastes and textures. Clara Foods is taking a similar route, using genetically engineered yeast to produce vegan egg white proteins. Beyond this, genetic engineering technologies such as CRISPR and TALEN could help create crops optimised for plant-based meat production, such as increased protein content, fewer off-flavors, or boosted nutritional profiles. So far, the industry has barely scratched the surface of what can be achieved through genetic engineering. For an in-depth review of how genetic engineering can be used in crop agriculture, see the IDTechEx report "Genetic Engineering in Agriculture 2021-2031".
However, technology innovation in plant-based alternatives is not limited to genetic engineering, which is a controversial subject for many consumers and can lead to significant technical and regulatory barriers. Even without genetic engineering, there is a huge scope for innovation in ingredient development. The vast majority of plant-based meat products rely on a relatively limited range of plant proteins, with soy, pea, and wheat proteins forming the bulk of the products. The enormous range of available plant proteins beyond these three crops remains comparatively unexplored.
Given the hundreds of thousands of plant proteins in nature, it is likely that any property of animal-derived proteins can be recreated almost exactly with plant-based alternatives. Several companies are developing strategies based on this. Eat Just claims to use a high-throughput screening technique to find plant proteins combinations that suit different types of foods, with different proteins impacting thermal stability, binding, browning ability, and flavor. For example, sorghum is used as a base for the company's cookie dough substitutes and Canadian yellow pea for its JUST Mayo product line. The company's JUST Egg product line is based on mung bean protein, which allows the final product to gel at the same temperature as a regular egg. Chilean start-up NotCo uses an AI algorithm called Giuseppe to find optimal combinations of plant products to replicate the taste and texture of animal products. Using this approach, the company has released NotMayo and NotMilk, analogs of mayonnaise and milk, respectively. The company also recently debuted the NotBurger hamburger substitute at Burger King and Papa John's restaurants in Chile. 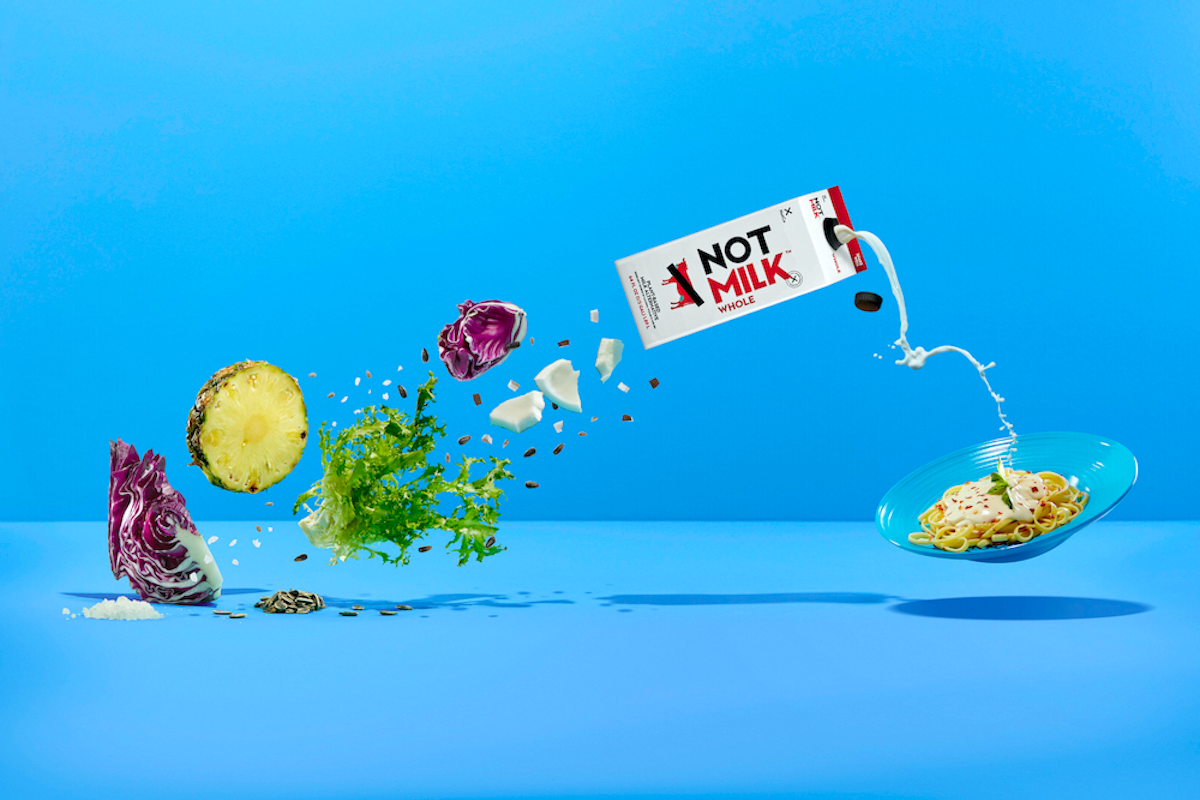 NotCo uses an AI platform to find optimized combinations of plant-based ingredients to create realistic analogues of animal products. Image source: NotCo
Despite the headway made by the plant-based industry into creating realistic analogs of burgers and dairy products, the industry has historically struggled to create analogs of "structured" meat products, meat products such as steaks, bacon, and chicken breasts, rather than "unstructured" products such as burgers and nuggets - products based on ground meat that have soft textures and homogeneous structures. Without realistic plant-based analogs of these structured products, plant-based meat is unlikely to significantly disrupt the global meat industry or significantly reduce the number of animals that are slaughtered worldwide.
However, companies to change this, with realistic analogs of structured meat being a major opportunity for the industry. Start-ups Redefine Meat and NovaMeat are both exploring the use of 3D printing to create structured plant-based meat products. 3D printing enables the creation of customizable products with intricate shapes and textures and so could be used to recreate the marbling of steak or the defined areas of fat and muscle in bacon. Although rapid, scalable, cost-effective 3D printing technology is likely a long way off for the food industry, Redefine Meat and NovaMeat are confident that it can be used to successfully create consumer products.
Atlast Food Co. and Meati are taking a different approach to create structured vegan meat analogs. These companies are exploring the use of mycelia to create meat analogs. hyphae. Unlike mycoprotein, mycelia are multicellular and can grow into macro-size structures - which we most often recognize as mushrooms. Mycelia can be quick, cheap, and easy to grow, only requiring sugars and water as main inputs, with a low carbon footprint. Because of their naturally fibrous structure, mycelia have the potential to create analogs of structured meat, with the fibrous structure resembling the fibrous texture of steaks, chicken breasts, etc. Atlast Food Co. grows large slabs of mycelia that can be cut and shaped into meat-like products, such as the company's inaugural MyBacon product, while Meati uses mycelia to create vegan "steaks". Given the low production costs and easy scalability of mycelia production, this could soon become the key approach to creating realistic analogs of structured meat.
Technology is progressing quickly in the plant-based meat industry and the next few years could be pivotal in deciding whether plant-based meat is able to disrupt the global meat industry and access the $1 trillion market that it occupies. "Plant-Based Meat 2021-2031", a new report from IDTechEx, provides an in-depth technical evaluation of the plant-based meat industry, alongside discussions of the consumer and market factors that will shape the emerging industry. Finally, the IDTechEx report provides 10-year market forecasts for the future of the plant-based meat industry. 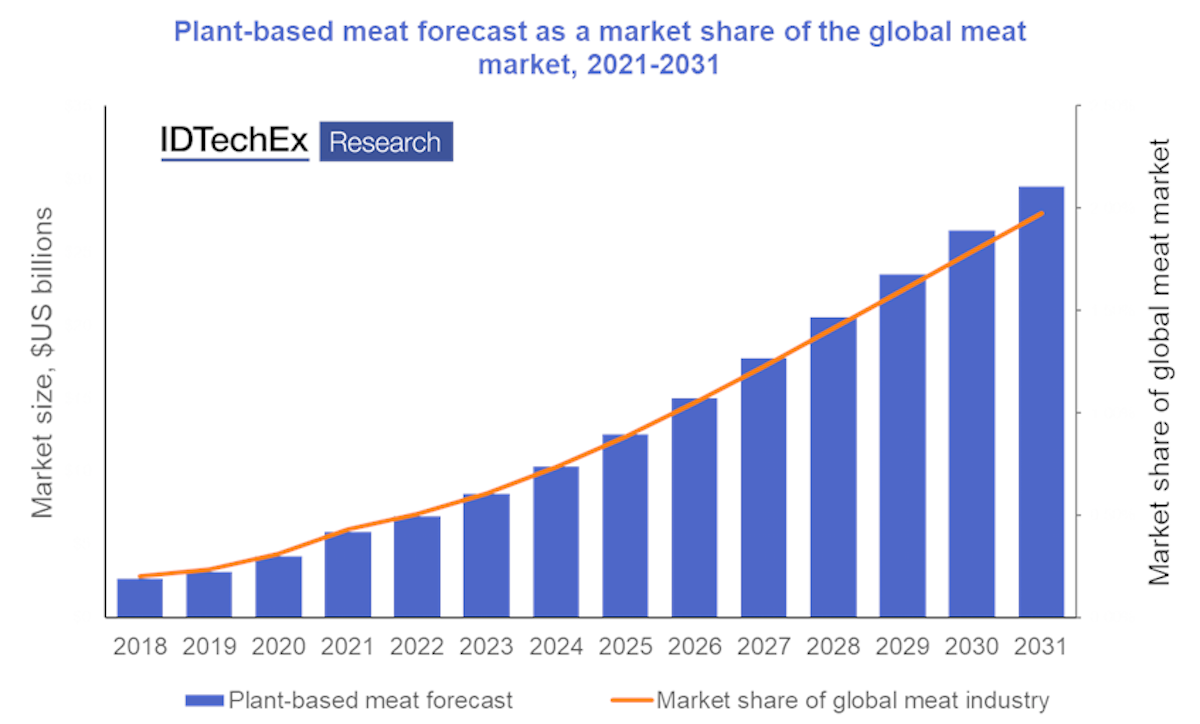