2022年1月18天 Dr Matthew Dyson
How do we communicate with our electronic devices? There are many different 'human-machine interfaces (HMI)' options, ranging from the well-established (keyboard/mouse/mechanical switches) to somewhat more recent developments such as the capacitive touch screens found on smartphones. As greater numbers of devices around us gain 'smart' functionality, the ability to incorporate HMI components elegantly and cost-effectively is increasingly important.
In-mold electronics (IME) is one solution. It's an emerging manufacturing methodology for producing backlit, touch-sensitive surfaces, removing the need for costly and possibly unsightly mechanical switches. With IME, the conductive traces are printed on a flat substrate, and electronic components such as LEDs may be mounted. This is then thermoformed and infilled with injection molding to produce a smooth, decorative component with capacitive touch functionality. These components are up to 70% lighter, take up less space, use fewer parts, and are simpler to produce than the conventional mechanical switches that they often replace. Automotive interiors are the main potential application (see graphic), but the technology also shows promise for consumer appliances especially given the wipe-clean interface it produces. 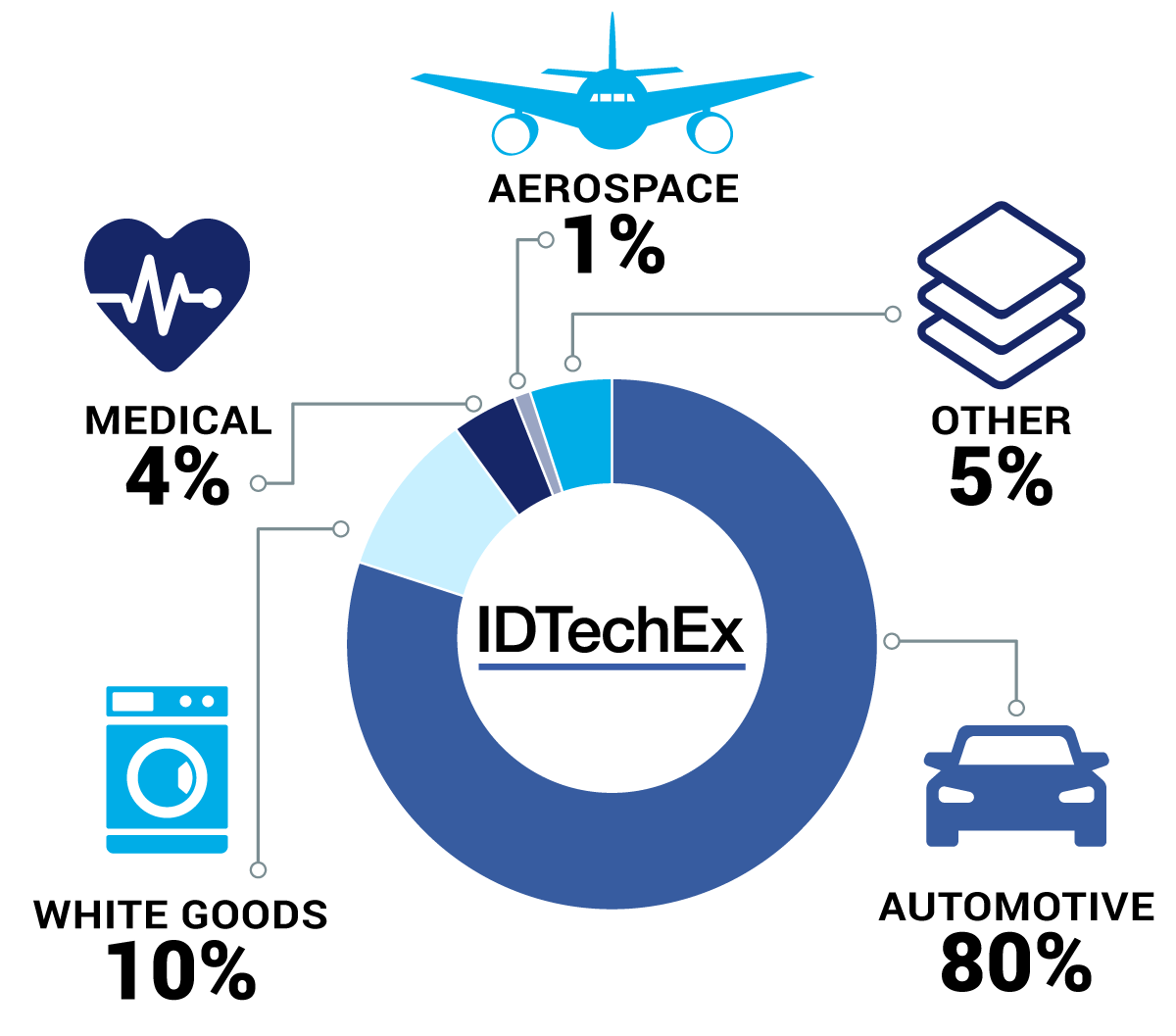 Future (2032) IME market breakdown by application. Source: IDTechEx
Within the IME space, there are multiple players developing related technologies, producing components with similar looks and functionalities but slight differences in the manufacturing method to avoid IP conflicts. Here, IDTechEx explore some of the main players and their differing business models, including the recent emergence of a new player: French company Symbiose.

Arguably the most prominent developer of IME technology is Tactotek, based in Finland. Since its inception in 2011, the company has raised almost $100m over multiple funding rounds. Its business model is based around technology transfer and licensing. The company has a pilot / small volume production line in Finland but works with multiple suppliers and OEMs to develop products and manufacturing capabilities using its IP. This strategy is highly scalable but requires a significant commitment from licensees.

However, licensing is not the only possible business model. A recent arrival on the IME scene is Symbiose, a French company that spun out of the CEA-LITEN research center. Based in Bordeaux, Symbiose has raised capital to build a factory and is planning to manufacture IME parts in-house. This approach has the benefits of keeping technological know-how under wraps and making quality control more straightforward. Furthermore, Symbiose is will likely be able to serve small volume orders, for companies that do not want to license the technology themselves.

Another player developing IME is E2IP, based in Canada. This company was formed from GGI, and has collaborated extensively with the National Research Council of Canada. Especially notable is its particle-free molecular ink, which promises less decline in resistance when the conductive traces are stretched during thermoforming. E2IP primarily operates a vertically integrated business model, which spans from its molecular ink via design and product development services to component manufacturing.

In-mold electronics can be regarded as an evolution of in-mold decorating (IMD), a well-established manufacturing approach for making curved decorative surfaces, such as the control panel on the front of washing machine or switchgear in cars - the difference being the introduction of electronics. Given the similarities, IME is an obvious opportunity for established IMD companies. One example is Advanced Decorative Systems (ADS), which supplies parts to the automotive sector amongst others. It has adopted a hybrid approach to IME, in which the conductive traces are deposited prior to thermoforming and injection molding, but the SMD components are not. This strategy 'de-risks' the process, since one of the main manufacturing challenges when producing IME parts is maintaining a high yield by ensuring that components such as LEDs are not damaged during the molding process. On the other hand, one of the attractions of IME relative to existing approaches is that integration of electronic and structural functionality reduces the part count, simplifying assembly and reducing weight.

Despite its benefits, and substantial interest from material suppliers that have developed IME-specific substrates and inks, IME that incorporates electronic components within the molded part has thus far seen limited commercial adoption. However, there are multiple development projects within both the automotive and consumer appliances space. Furthermore, producers of manufacturing equipment such as Arburg are developing equipment for mass production of IME components. As such, IDTechEx forecasts that IME component sales will accelerate from 2023/2024.
Furthermore, IDTechEx suggest that the emergence of IME component developer and manufacturer Symbiose is a substantial positive for the IME adoption. Having multiple players, even with slightly different manufacturing processes, within the IME space lends credibility and reduces supply chain risk. Ultimately, IME will be regarded as a mature technology when it is as easy to order an IME circuit as it is to currently order a conventional printed circuit board (PCB), rather than requiring a dedicated product design process as at present.

This article is based on the recently released IDTechEx report "In-Mold Electronics 2022-2032: Technology, Market Forecasts, Players" which covers both IME and competing technologies for producing decorative capacitive interfaces. It discusses the manufacturing methodologies, material requirements, applications, and challenges in considerable detail. 10-year market forecasts by application sector, expressed as both revenue and IME panel area, are provided, along with the associated material opportunities. Also included are multiple application prototype examples, life cycle analysis of typical IME component, and multiple company profiles based on interviews with early-stage and established companies. Further details and downloadable sample pages can be found at www.IDTechEx.com/IME.