2020年7月31天 Dr Xiaoxi He
MicroLED, believed by many to be the next generation of display technology, has been pursued by players of LED, display, OEM, materials and so on. Differentiated from LCD and OLED, microLED is considered to be the only display technology that has no size limitation. What are the potential applications? What are the hypes and realities? These are questions addressed in the brand-new IDTechEx report, "Micro-LED Displays 2020-2030: Technology, Commercialization, Opportunity, Market and Players".
Various Motivations Are Driving the Progress of MicroLED Displays
Samsung Display has announced it is ending the LCD business and will focus on its QD LCD & OLED businesses. LG Display has halted its domestic production of LCD panels. Korean vendors tend to reduce their LCD panel production and shift to QLED & OLED. In addition, Panasonic and JDI are also getting out of the LCD business. AUO, Innolux and a few other Taiwanese companies are slowing down investment in LCD or OLED. As a comparison, LCD manufacturing is shifting to mainland China due to cost competence, new line production efficiency and industry chain support.
In the OLED area, OLED panel production is dominated by Korean companies in terms of effective production capacity, upstream materials & equipment, downstream application, and supply chain completeness. For instance, SDC and LGD have supported upstream material and equipment companies, building good ecosystems. For the downstream applications, Samsung's small/middle-sized OLED panels are first supplied to Samsung smart phones, while LGD's large-sized OLED panels are first offered to LG TVs. Their brands can also provide enough support and feedback. Samsung and LG are dominating small/middle and large-sized OLED panels, respectively.
Regarding the core upstream materials and equipment, Japan and Germany are very strong. Their advantages can be applied to not only LCD or OLED, but other potential new display types as well.
With this background, getting involved in a new display technology could bring new opportunities to the relevant players, as a new display technology can break the current regional clusters and advantages, forming a new industry structure.
This is one of the important reasons why microLED displays have attracted so much interest. In addition, microLED displays deliver value propositions such as wide colour gamut, high luminance, low power consumption, excellent stability and long lifetime, wide view angle, high dynamic range, high contrast, fast refresh rate, transparency, seamless connection, and sensor integration capability, etc. Some of the value propositions can be provided by alternatives such as LCD, OLED and QD, while microLED has its unique value propositions that are pursued by many. 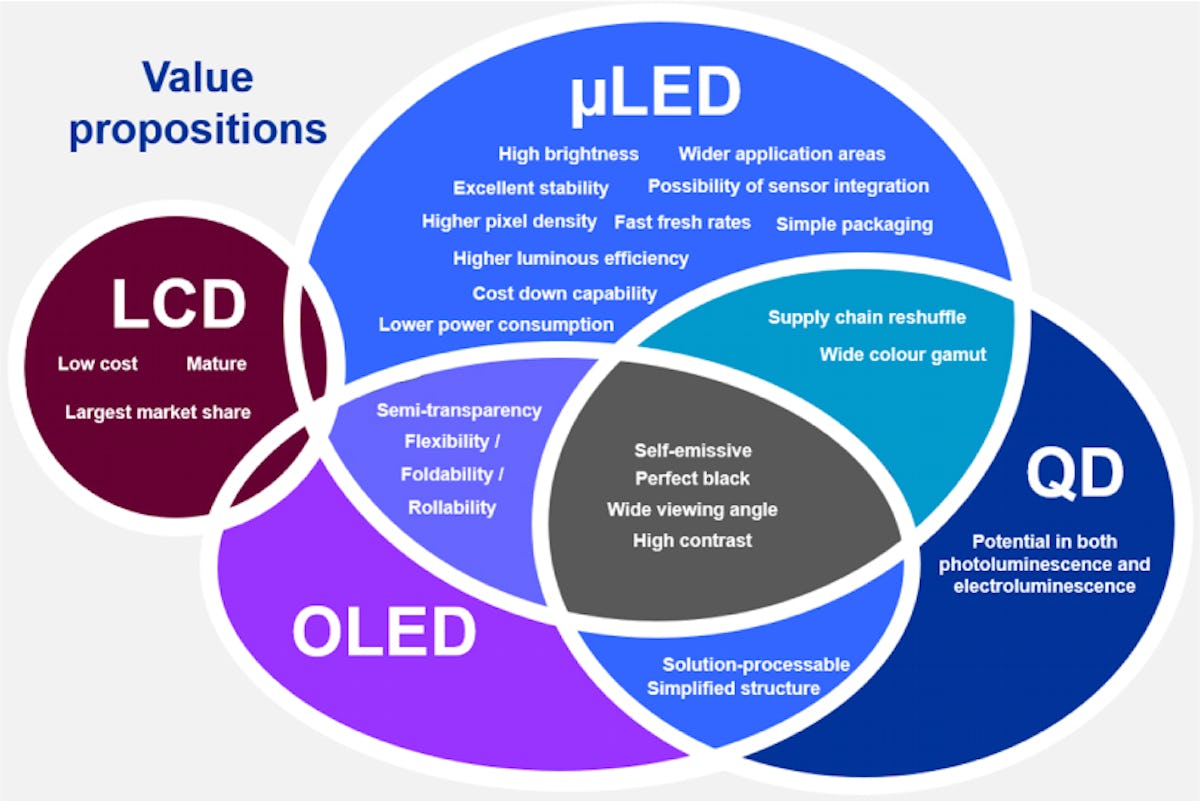 Value propositions of various display technologies. Source: IDTechEx
Another driver is the increasing number of players following up the microLED industry. MicroLED may not be their major focus at the moment, but they keep a close track on it, just in case when microLED really takes off, they can quickly catch up, instead of being left behind.
Increasing Activities with Shifted Development Focuses
The increasing number of activities from display suppliers can be seen from the large cumulated investment of ~$5 billion, the increasing number of patent filing, as well as the prototypes/products brought in by microLED vendors. We can see names such as AUO, PlayNitride, RiTdisplay, Samsung, LG, Sony, TCL, Tianma, Konka, Glo, Plessey, JBD, X-Display, VueReal, CSOT, Sharp, Kyocera, etc.
However, prototypes to prove technology/science readiness with lab/fab scale production are very different from mass manufactured commercial products. The latter requires zero defects for consumer products. Although science has been proved there, what are more challenging are the engineering and manufacturing issues. For instance, conventional LEDs can reach external quantum efficiencies (EQEs) to ~70%, while tiny microLEDs less than 10 µm may struggle to reach 20%. Red LEDs are especially challenging with low EQEs and brittle feature. Tiny microLEDs have a large surface area, which may lead to more defects during the fabrication process. Therefore, solving engineering/manufacturing challenges is important, including die size miniaturization while maintaining the high efficiency, chip design and chip manufacturing technique improvement. Other issues include mass transfer yield, defect repair, testing, uniformity, colour conversion, etc.
To fabricate a microLED display, many technologies and processes are involved, such as epitaxy, photolithography, chip fabrication, substrate removal, inspection, mass transfer, bonding and interconnection, testing, repair, backplane and drive IC, etc. After years of development, some technology difficulties have been solved, while new challenges are placed in front of us. For instance, several years ago, the major efforts were concentrated in die miniaturization, chip design and mass transfer, etc. Recently, more and more players realize a complete understanding of all the processes is key. Therefore, an increasing number of people put more efforts also on technologies such as inspection, repair, driving, image improvement, light management, and high-volume production equipment.
Supply Reshuffle Under COVID-19
One of the biggest discussions happening in the world right now is COVID-19. With more and more countries having COVID-19 under control, the question is not only the public health, but also the longer-term effects it throws to us in the social, economic, and political aspects.
Involving multiple existing industries and new industries, micoLED displays may shape the existing LED and display supply chain, resulting in a lengthy and complex new one. New technology approaches and new products can also provide new opportunities for the players, such as the CMOS industry can take a position in the microLED-based micro-display supply chain.
Experienced with COVID-19, the global economy and supply chain building might be influenced.
The perceptions of COVID-19 in February and afterwards are quite different. In February, the situation of COVID-19 was the most severe in China. Therefore, many analyses focused on the supply chain safety. The risk has been discussed multiple times to further rely the global industrial supply chains in China. While from March, the global pandemic made people view from a broader angle. First, the global economy growth has been severely downgraded all over the world and unemployment rates have increased, even with the government support from some countries. Second, the consumer industry has been deeply affected. The purchasing of less necessary products will be reduced both for consumers and business units. Thirdly, the financial markets have been impacted. Next, but not least, the impact to the global supply chain will remain, both for now and in the future.
It has been accepted by many that the COVID-19 global pandemic will make U.S.-China relations more tense. Also, globalization is in decline with closed borders, travel restrictions, export conditions and paralyzed supply chains. On the one hand, IDTechEx has heard from a few small companies that they deliberately chose to partner with companies who are less likely to be affected by the trade war. On the other hand, although globalization is still the general trend, regional clusters may play a more important role in the supply chain building than global network in the future. 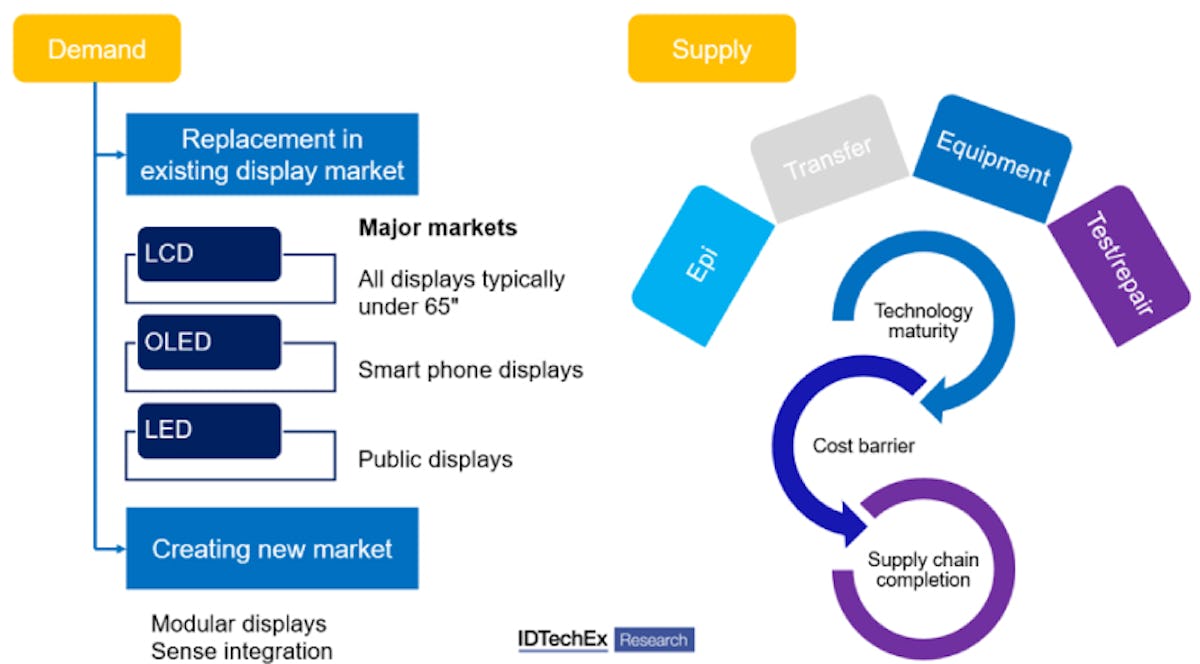 Demand and supply of MicroLED displays. Source: IDTechEx
Application Markets for MicroLED Displays
The demand for microLED displays can be analysed from two aspects:
For the former, 8 applications shown below are addressed most. They are augmented/mixed reality (AR/MR), virtual reality (VR), large video displays, TVs and monitors, automotive displays, mobile phones, smart watches and wearables, tablets and laptops.

Replacement in existing application markets
For instance, LCD displays, which dominate the current display market, are applied in almost all displays under 65". LCDs have their intrinsic limitation to go larger size. OLED are taking an increasing market share mainly in smart phone displays. QD-LCDs are marketed as premium TVs and are accepted by an increasing number of consumers. LED displays are already used in huge public displays. To compete with them, microLED should identify their unique value propositions or value proposition combination to offer advantages.
On the other hand, what can be offered at this stage sets the boundary. For example, in order to be cost competitive, microLEDs should be fabricated into tiny sizes. However, tiny microLEDs have much lower efficiency compared with traditional LEDs used for solid state lighting. The low efficient microLEDs may not be able to offer the value proposition "low power consumption" for applications which require small LEDs and low power consumption.
In terms of cost, the cost of the front plane of a typical microLED display is dependent on the number of LEDs, instead of area, which is different from OLED and LCD. This is why fabricating a smart phone with the same resolution of a TV may result in similar cost projection, rather than orders of magnitude lower expectation.
Therefore, it is significant to understand different technology approaches behind each application and to get clear assessments on their possibilities and opportunities.
To create a new display market requires features that cannot be enabled by alternatives. Typical examples include displays with customized shape and displays with sensor integrations. The emerging new displays expand our imagination beyond existing displays and help to get to the world with ubiquitous displays.
IDTechEx has completed a brand-new research report on microLED displays, focusing on the technology assessment, market status analysis, supply chain understanding, player activity tracking, business opportunity and application interpretation. For a complete understanding, please refer to IDTechEx's brand-new report "Micro-LED Displays 2020-2030: Technology, Commercialization, Opportunity, Market and Players".
IDTechEx guides your strategic business decisions through its Research, Consultancy and Event products, helping you profit from emerging technologies. For more information on IDTechEx Research and Consultancy, contact research@IDTechEx.com or visit www.IDTechEx.com.
PrintForwardTweetLikePinredditShare
Previous
Next