Jun 13, 2007 Dr Peter Harrop
Silicon chips have had a good run in the electronics industry but the lowest cost chips have not changed much in price for decades and wide area silicon, as with solar cells, is heavy, expensive and in need of huge government subsidies to be sold in any volume. Truly flexible - as opposed to bendable - silicon is non-existent in practicable form. Enter thin film electronics that increasingly can be printed, unlike silicon, and is potentially of low cost and very versatile, being useful for sensors, power, memory, logic, lighting and much else besides. Here we are not just talking of semiconductors but of dielectrics, conductors and light emitters for example.
Many companies and conferences use the terms organic or plastic electronics because over the last ten years huge developments have been made with organic based devices, such as higher mobility and more stable materials, formulations allowing for printing organic semiconductors and much more. The progress of this new industry is phenomenal. So that is the end of the story? Nothing could be further from the truth. While the contribution of organic materials is greatly publicized and has attracted over one thousand participants already, there have been significant developments with inorganic printed electronics or combinations of both.
For conductors with vastly better conductance and cost, for the best printed batteries, for quantum dot devices and for transistor semiconductors with ten times the mobility, look to the new inorganics. That is the emerging world of new nanoparticle metal and alloy inks that are magnitudes superior in cost, conductivity and stability, such as the flexible zinc oxide based transistor semiconductors working at ten times the frequency and with best stability and life, along with many other inorganic materials.

Most companies developing Organic Light Emitting Diodes OLEDs employ indium tin oxide (ITO) semi transparent electrodes and most other "organic" devices, including transistors, employ metal conductors. Indeed, given the mobility and therefore the operating frequency of organic transistor semiconductors, companies such as Motorola and Hewlett Packard in the USA are additionally researching inorganic semiconductors.
In other words, it is complementary to learn how to print a transparent inorganic semiconductor, with up to 400 times the mobility, alongside trying to invent stable, low cost organic semiconductors with device mobility exceeding 10 cm2/Vs, when even improving on one tenth of that is proving tough.
It becomes a matter of "Shall I make the new inorganics printable?" or "Shall I make organics work better?" Not everyone is jumping the same way. Indeed there is a spectrum of choice as shown in the figure below. Here we are simplifying in calling the right side "organic" because it almost always involves metal conductors, just as the left side often involves organic substrates. The technologies live together - and that is not just an interim stage. 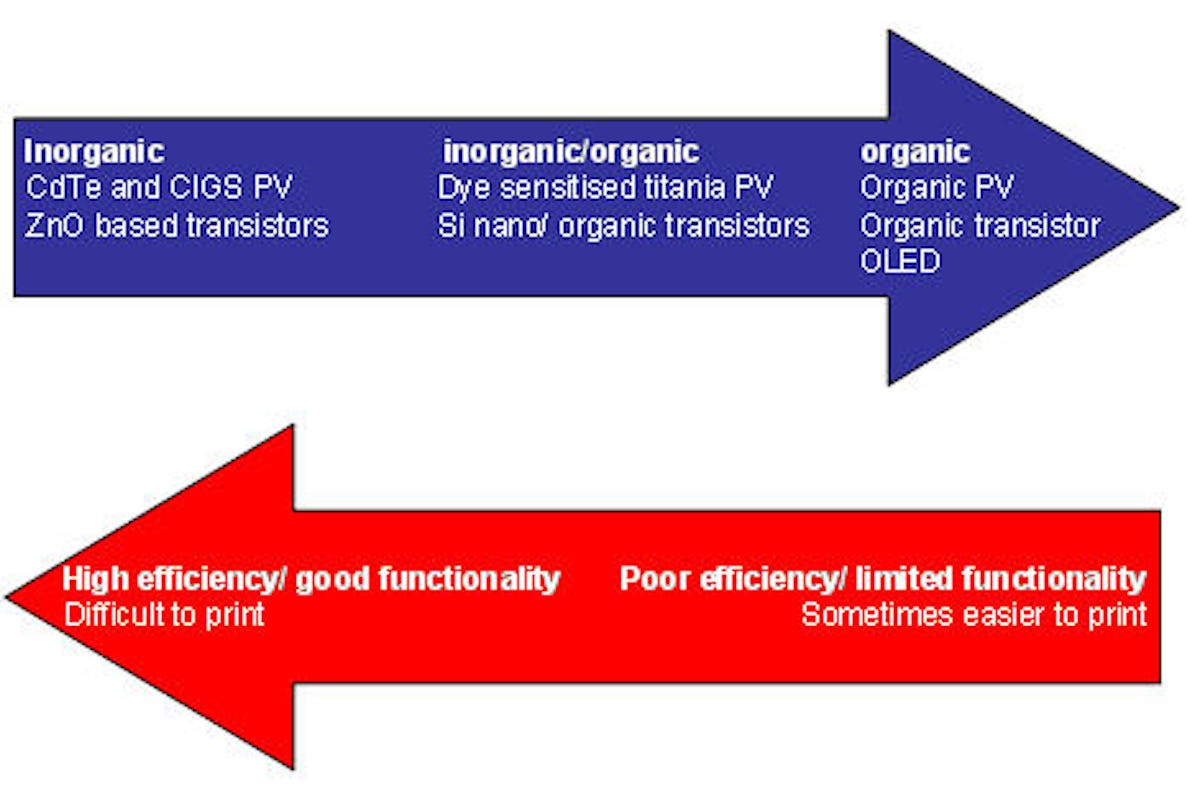 How it is panning out

Although the term inorganic printed electronics may not be on everyone's lips any time soon it is now recognized as an area of tremendous commercial potential and technical progress. The cohabitation of organics and inorganics is probably panning out in the manner below. This is, literally, a very fluid situation. The table shows the likely impact of inorganic printed and potentially printed technology to 2017 by giving the dominant chemistry by device and device element. Dark green shows where inorganic technology is extremely important for the active (non-linear) components such as semiconductors. Light green shows important contributions from hybrid inorganic-organic technology. Red shows where organic technology has the greatest potential over inorganic. 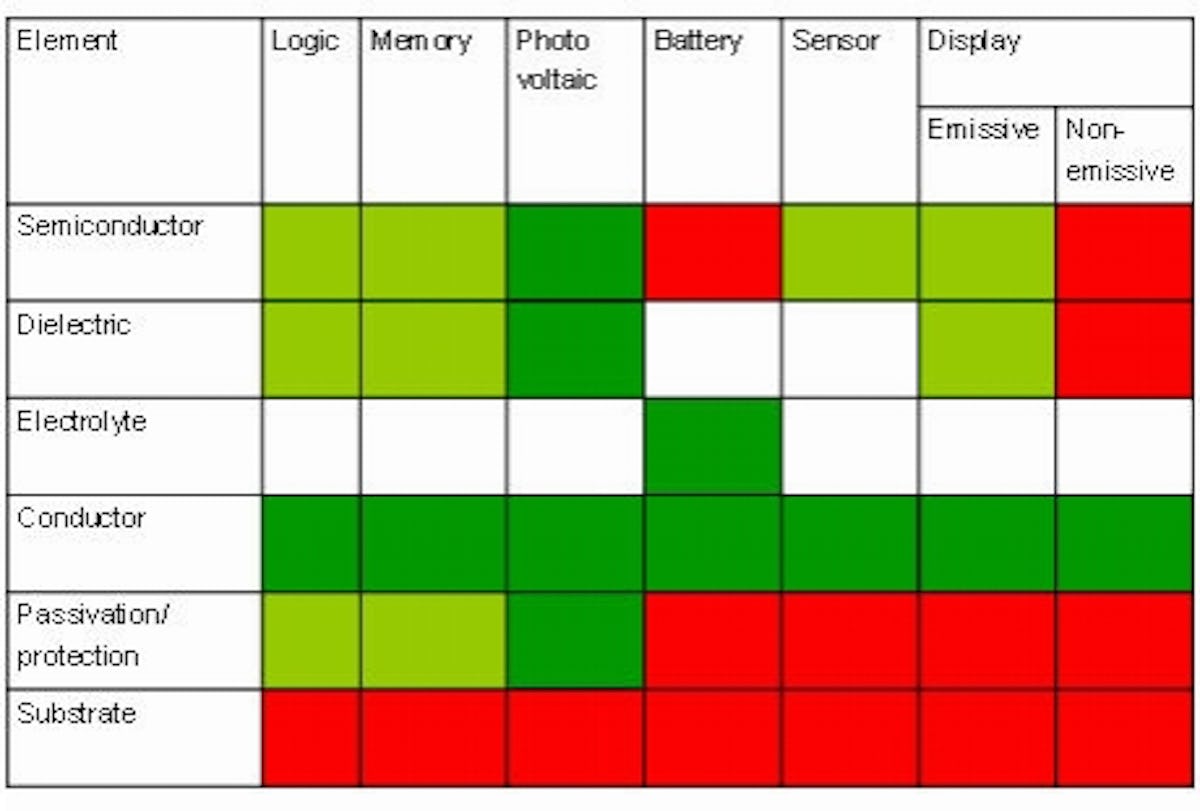 Among the fastest growing companies in the new electronics are those that offer flexible A.C. electroluminescent displays that can cover many tens of square meters, emitting a range of colours, or be incorporated in watch faces and instrument displays. They involve six to eight printed inorganic layers, including a copper doped phosphor, the only organic material being a routine plastic film substrate.

Dye sensitised solar cells (DSSC) reaching the market are based on titanium dioxide. CIGS solar cells researched by IBM, commercialised successfully by Miasolé in the USA and being developed by several other companies are inorganic - based on copper, indium, gallium diselenide. They are certainly wide area and flexible. Can they be printed?
It is little wonder that there is a rapidly growing number of organizations developing potentially printable inorganic and hybrid electronic materials and devices. Spectrolab in the USA recently demonstrated 40.7% efficiency with a gallium arsenide/ germanium solar cell, eight times that of the best organic versions (which are improving only slowly nowadays) and up with the very best performance of heavy silicon. Spectrolab already offers commercially flexible solar cells based various inorganic compounds.

Last year, Toppan Printing in Japan demonstrated a flexible electrophoretic display back plane driver employing amorphous indium gallium zinc oxide semiconductors processed at room temperature. This is based on work at Tokyo Institute of Technology in Japan. Toppan Printing claims much higher mobility and therefore potentially higher frequency of operation than organic alternatives. Both companies have programs to commercialize their inventions though Plastic Logic of the UK is ahead with flexible electrophoretic displays because it is already building a factory in Dresden in Germany to make them using its organic transistors.

Do not wait for highly conductive organic inks

Progress in improving the rather resistive so-called organic conductors is also limited, so new inorganic conductors also are being developed by many companies such as Cabot, Emerson & Cuming, Parelec, NanoDynamics, FerroCorp and NanoMas Technologies of the USA. Then there are nanotube carbon and inorganic inks coming along as both conductors and semiconductors thanks to Unidym of the USA and others, though they may not be low in cost for some time. Despite this there is some traction in the marketplace for the newer organic conductors including semi-transparent ones so the situation evolves.

Lighting may go either way

The US Department of Energy forecasts that the new laminar electrics will eventually achieve lighting at a very environmental 160 lumens per watt efficiency vs only 50 lumens per watt for fluorescent lighting today. However, it is careful to say that it may be inorganic or organic technology that is successful in this respect. The race is on.

In 2007 IDTechEx find that the amount spent on inorganic electronic components and inorganic materials for composite components will be $482.7 million. Much of this is in fairly mature markets - metal flake ink used for conductors in heated windscreens, membrane keyboards and circuit boards and disposable sensors for the 2.2 billion glucose sensor labels sold yearly. However, also making an impact in 2007 in this figure are electrophoretic, electroluminescent and electrochromic displays, laminar batteries and thin film photovoltaics. In 2007 inorganic semiconductors are being developed but sold as proof of concepts and prototypes only, but by 2012 IDTechEx see that inorganic semiconductors will be 30% of the thin film semiconductor market versus 70% for organic semiconductors.
Thin film electronics: Organic versus inorganic market share in 2007. Figures include logic, memory, display front planes (OLED, electrophoretic, electrochromic, electroluminescent, other), batteries, photovoltaics, sensors and conductors

Source IDTechEx Inorganic Printed and Thin Film Electronics
IDTechEx find that in 2017, of a total $48.18 billion market (which includes printed and thin film displays, logic, memory, photovoltaics, power and sensors), the amount spent on inorganic components as a whole or in composites with organics will be approximately 40.3% - $19.43 billion. This highlights the importance of inorganic printed electronics and the opportunity for companies to be involved. The new IDTechEx report "Inorganic Printed and Thin Film Electronics" describes the reasons for the market growth based on wide industry research, participants and their achievements in these inorganic-based activities and the fabulous opportunities that lie ahead for them. With over 135 tables and figures, it critically compares the options, the trends and the emerging applications. It is the first in the world to comprehensively cover this exciting growth area. To learn more go to www.idtechex.com/inorganic or call + 44 (0) 1223 813703 or email info@idtechex.com.

Save 20% on the report price by using the promotional code PEW when ordering at www.idtechex.com/inorganic - only available until June 30 2007! 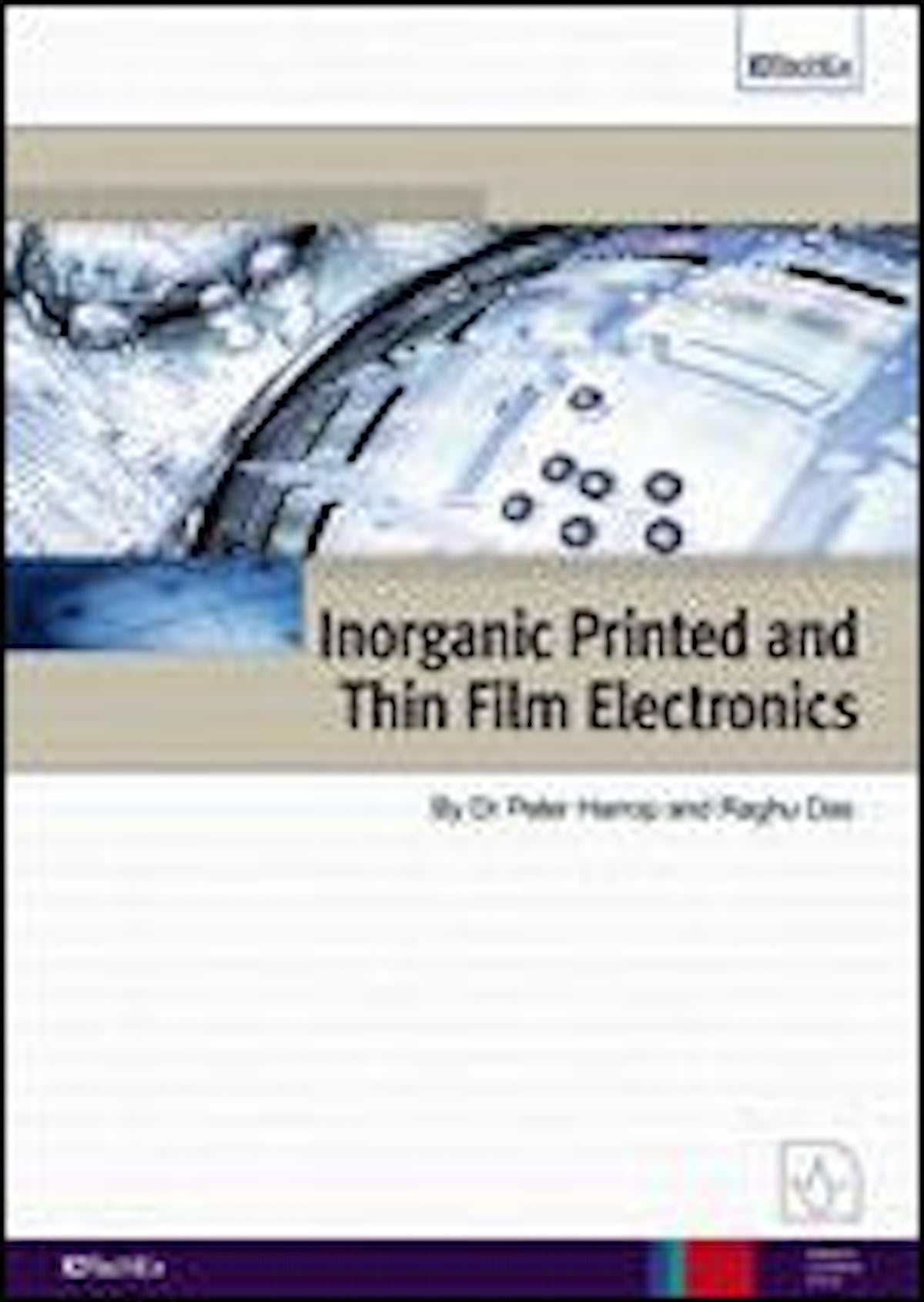