Lessons from Electric Vehicles: Everything is Changing Part One

Lessons from Electric Vehicles: Everything is Changing Part One

May 02, 2016 Dr Peter Harrop
The conference "Electric Vehicles: Everything is Changing" in Berlin 27-28 April was a great success. Here we give only a glimpse at the rich insight and information presented. IDTechEx deliberately pitched the event as different from other electric vehicle conferences in looking firmly at the future including the speculative and ill-defined.
The introduction was by Gernot Lobenberg, Coordinator of Berlin Brandenburg International Showcase for Electromobility eMO, who eloquently described the past superlatives achieved by this region, the records today and the ambitious future. Dr Peter Harrop of IDTechEx then looked at megatrends over the next twenty years such as the widening of EV options. They now include an escape route for those making traditional vehicles that face becoming illegal under onerous 2025 and 2030 carbon dioxide emissions laws and vilification concerning other emissions. It is the incremental adaptation called the 48 V mild hybrid, subject of a new IDTechEx report. He explained how that will evolve into having a traction motor driving the vehicle along some of the time in pure EV mode - in other words later versions of 48V mild hybrids will meet the definition of electric vehicles with many features that riders will enjoy as great improvements such as silent pure electric take-off, silent stop-start and pure electric creeping. He also introduced the new end game of energy independent vehicles, a feature of the event with a record-breaking solar racer on display and presentations from the winning Nuon Solar Team and their Cambridge University rivals and from the Immortus car project aimed to bring "perpetual speed" to road legal cars with seven square meters of solar panelling and ultra-lightweighting and aerodynamics. 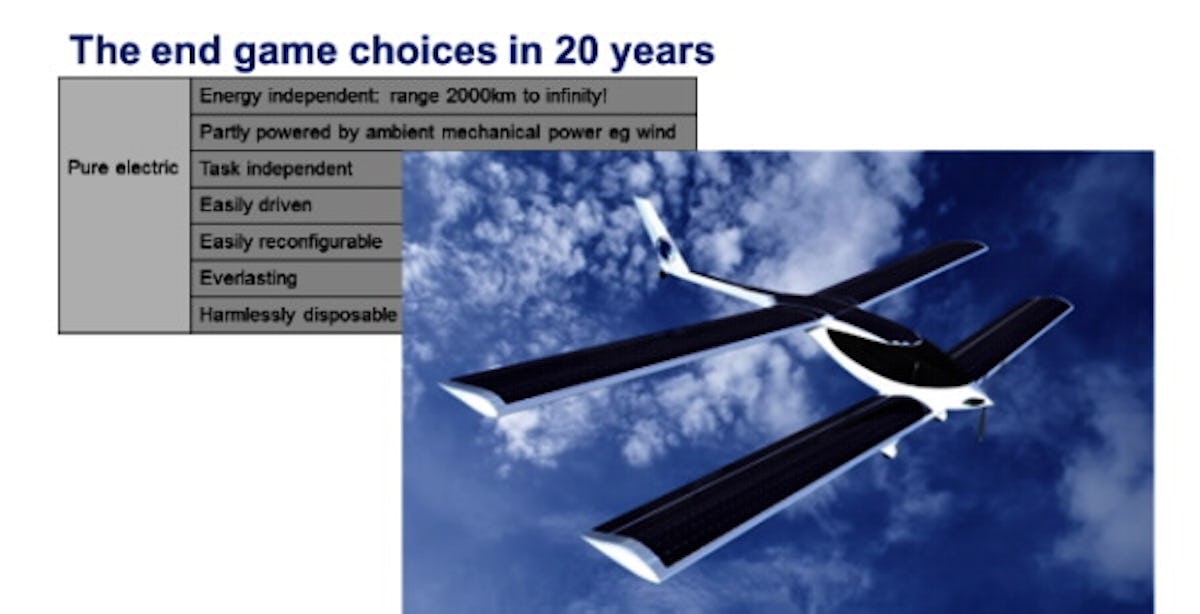 Source IDTechEx
Harrop described the EIVs on sale today such as the Nanowinn "perpetual" tourist bus and the imminent such as the Canadian Solar Ship solar powered inflated wing for heavy "perpetual" transport. He gave some detail on the many routes to better energy storage through to 2029. He gave forecasts showing eventual collapse of all options other than pure electric vehicles due to laws in some countries and preferences in others, this coming around 2030 though he said it could come earlier if governments ban everything other than pure electric new vehicles and we have more of the Tesla phenomenon.
Toyota, world leader in EVs and Dr Jeorg Wind of Daimler gave superb presentations on their fuel cell vehicle rollouts, Toyota arguing that hybrids are the end game with fuel cell versions taking major market share. Toyota, the largest EV manufacturer in the world with such things as number one position in electric forklifts and hybrid car leadership, justifiably proclaimed its immaculate strategy in the past and how it is keen on fuel cells for the future but they will only expect to sell 30K in 2029 or 2030 because of infrastructure and other needs. They pointed out that they back many powertrains not just fuel cells. In answer to questions, they argued that the customers are largely uninterested in the type of powertrain so fuel cell vehicles do not have a consumer proposition as such. They said there is no scope for premium pricing of fuel cell vehicles. They said that battery vehicles are not always the greenest or the most efficient option. They predicted that it will eventually be possible to match the up front and total cost of conventional vehicles with fuel cell hybrids. Historical reduction in cost of fuel cell vehicles is already formidable.
Manfred Schmidt of Siemens gave a perceptive analysis of the large number of electric options with buses concluding that no one option will suffice but pure electric in the centre of cities and series (range extended) hybrids - eventually fuel cell hybrids - will also be needed. In the past the OEMs decided what to supply but now, he said, it is the cities etc buying the buses that will decide. 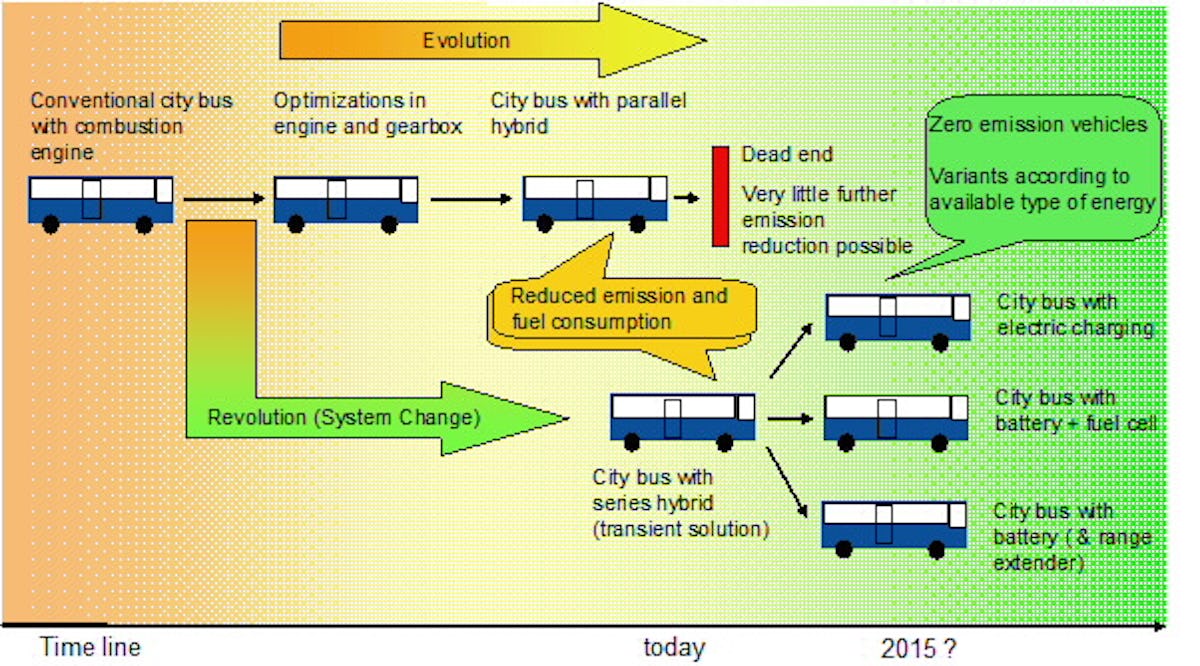 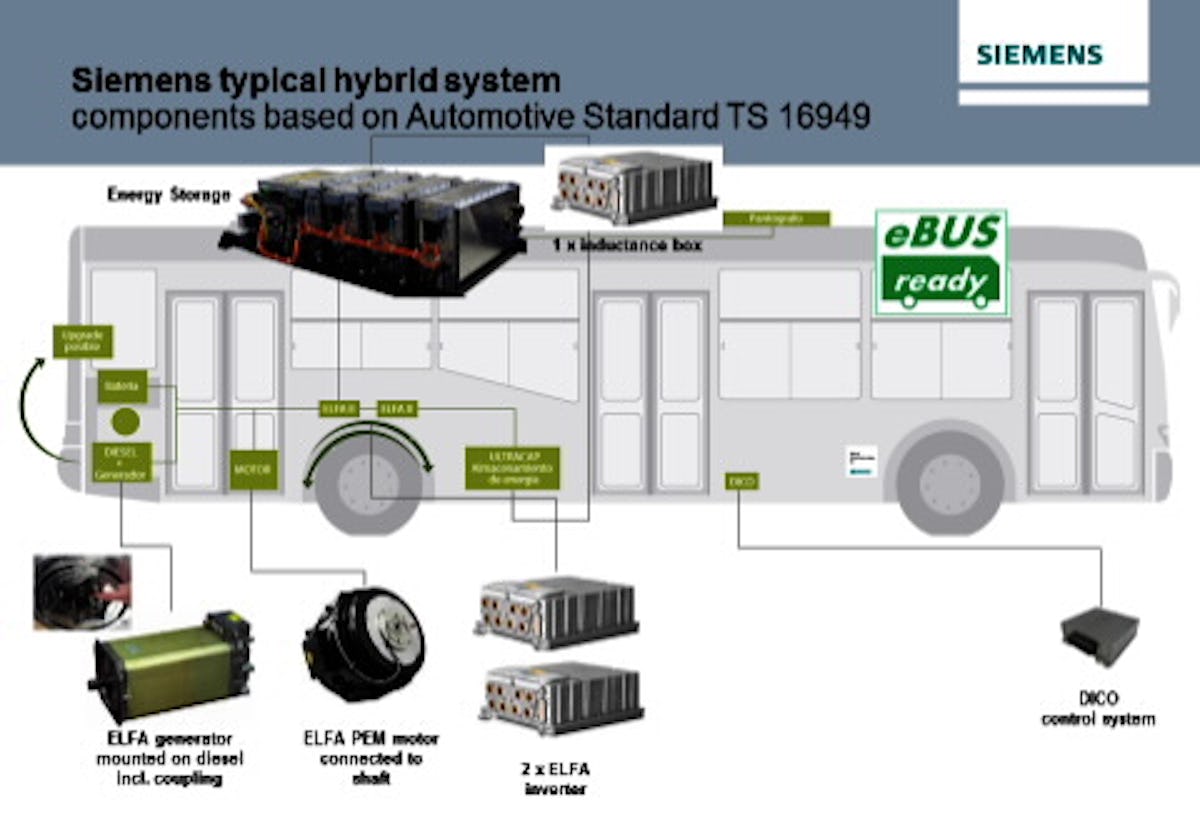 Source Siemens
He warned that change is slow partly because a bus lasts 12 years. However, "Almost all vehicles will be electrical" in the end. He warned that we must keep up with technology, "or the Chinese will over roll us".
PrintForwardTweetLikePinredditShare
Previous
Next