Déc 06, 2016 Dr David Pugh
While in Santa Clara for the IDTechEx Show, technology analyst Dr David Pugh met with staff at Levi's Stadium, home of the San Francisco 49ers. The 68,500 capacity stadium was opened in 2014 and is one of the most technologically enabled entertainment venues in the world. The stadium holds events throughout the year ranging from NFL games to Beyonce concerts and most notably hosted Super Bowl 50 in February 2016.
The stadium makes excellent use of its location, at the heart of Silicon Valley by partnering with a huge range of local tech giants, fans cross the nrg solar bridge on their walk up to the stadium and enter though Intel gate as well as access Verizon charging stations throughout the stadium concourse. At the end of the game, whether elated or deflated with the result of the game, the faithful (as 49ers fans are collectively known) can get home easily by heading to the stadiums UBER pick up zone.

With 40 gigabits per second of available bandwidth, the availability of free wifi throughout the stadium is at the heart of the Levi's Stadium fan experience. The stadium contains 1200 access boxes (approximately one box per 100 fans), placed under seats meaning people inside the stadium are never more than 10 feet from a wifi booster. These boxes are connected by over 70 miles of cabling and can result in download speeds of more than 50 mbps. This has been utilised by fans and so far, this season, more than 4.3 terabytes of data (equivalent to 68,000 of music) was sent. Seats in the stadium contain a phone holder and fans are encouraged to use the stadium app, built by VenueNext, to listen to commentary, watch replays and catch the action from other games around the country. The app also serves as a season ticket and parking pass, which are scanned on entry to the stadium.

Wifi boosters placed under seats and Bluetooth beacons around the stadium enable fans to make use of the stadiums app to order food, find their seats and watch replays via a mobile device.
The 1700 low energy Bluetooth beacons situated around the stadium are able to guide app users to their seats, or any other part of the stadium they wish to visit. In addition to this, the app recommends bathrooms or concession stands depending on those with the shortest queues. When watching the app enables users order food, drink and merchandise which can be delivered to their seats in under 10 minutes. There is potential in the future for such items to be delivered by drones, but for now, this service is provided by a small army of stadium employees.
Since the 49ers opening game in August 2014, more than 315,000 users have made use of the app. The stadium owners can use this information to understand how early fans arrive at the stadium, how long after arriving they enter the stadium, what food/drink/souvenirs people buy and at what point in the game, do people go for beers after a 49ers touchdown, or drown their spirits when an opposing team make an interception? This data can be used to prepare stock and ensure that concessions are ready for a surge in sales at a particular point in the game. 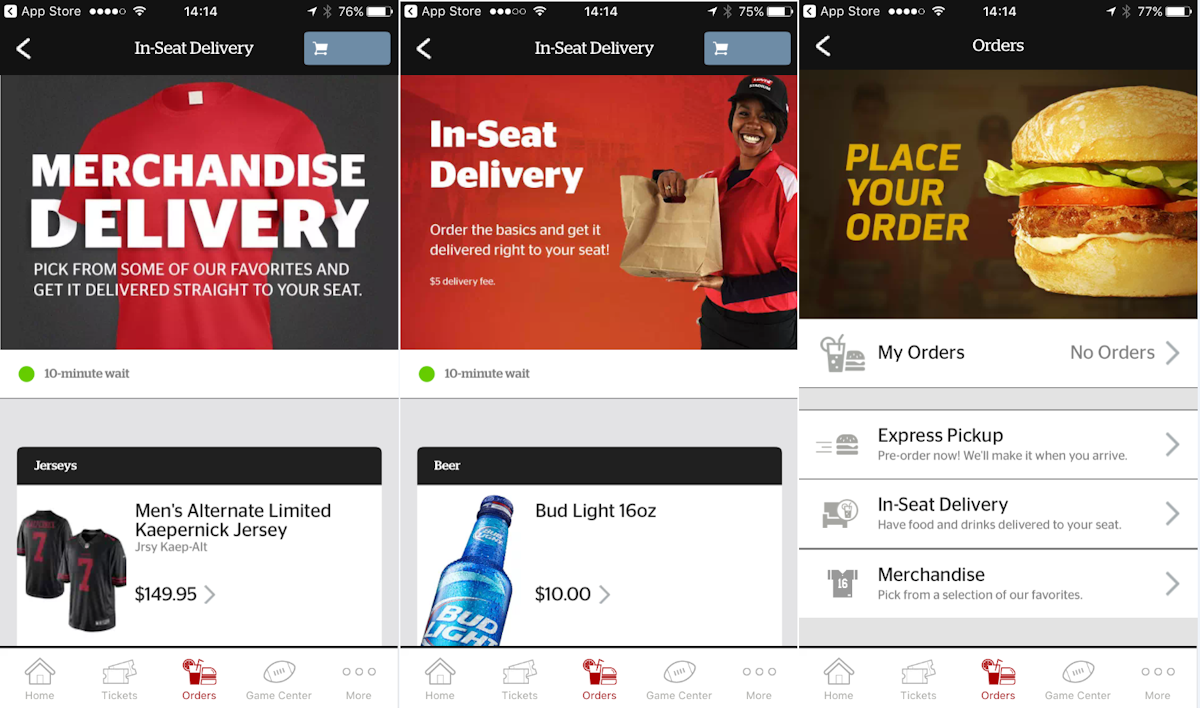 In addition to 2000 HD television sets around the stadium, two 96,000 square foot LED screens tower over the stands at opposite ends of the field, these screens display all of the action as well as scores, adverts and other messages in 1080p displays, the screens are capable of 4K resolution, which far exceeds the current NFL standards for in stadium display. Speakers are placed behind the screens so that all sound is focussed into the stadium, reducing noise pollution to local residents.
Ribbon boards at all gats also allow for directions, travel information and personalised messages on entry to the stadium. 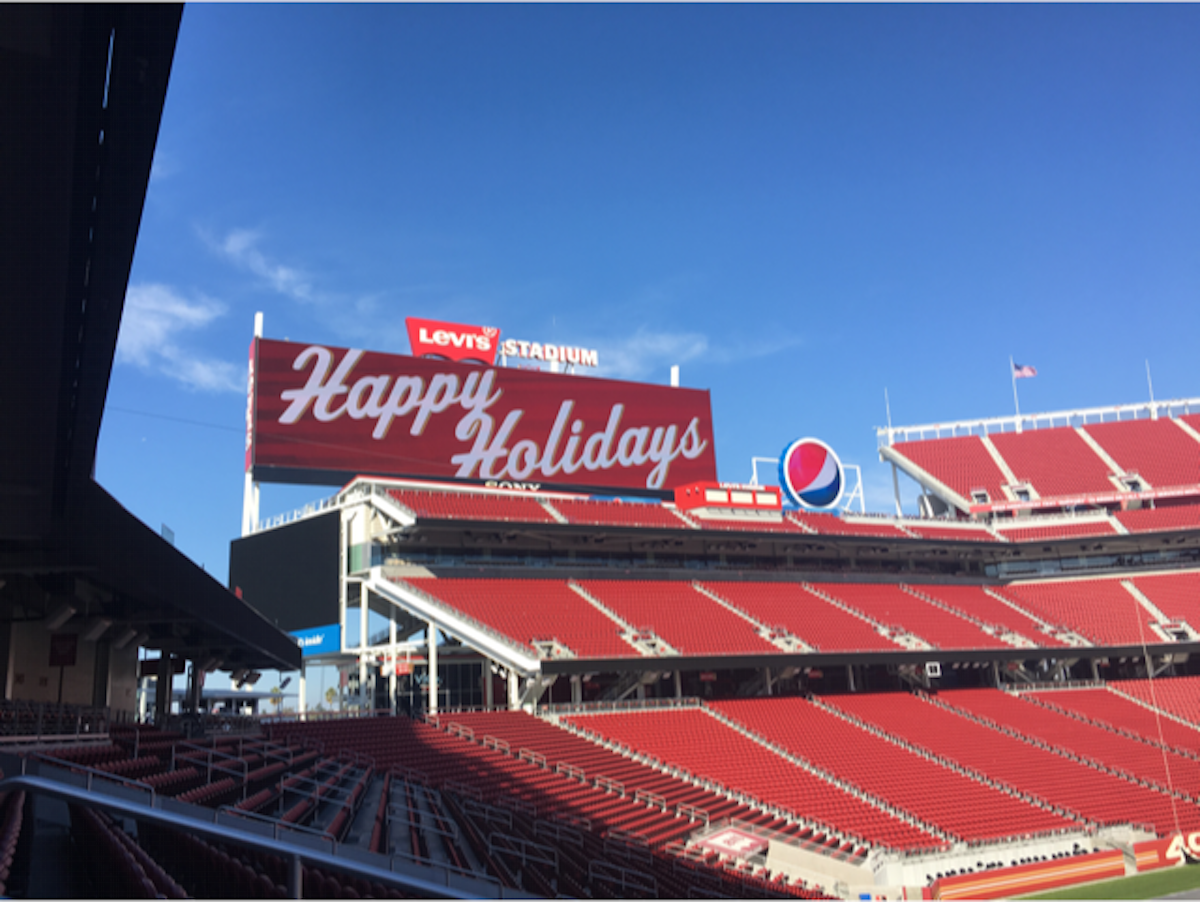 The stadium recently received a Gold LEED (Leadership in Energy and Environmental Design) certificate in recognition to the sustainable approach to construction and ongoing recycling and energy harvesting efforts. In addition to recycled water collected at the roof of the stadium being used to irrigate the field, solar power plays a huge role in the supplying the energy required to run a major entertainment arena, the stadium roof contains more than 280 photovoltaic panels (over 20,000 square feet) which can, if required, supply enough power for all 10 of the 49ers home games. A roof garden grows herbs that are used in restaurants throughout the stadium.

Intel have recently installed 35 5K-video cameras around the stadium in order to capture the on field action from close to 360°. This enables broadcasters to 'freeze' video during a replay and rotate the view so that fans can get a clear sight of the action from several angles. Referees will eventually be able to utilise this technology to get a clear view of the ball when reviewing potential penalty calls.
The huge advancement in home theatre technology and universal coverage of live sports means that franchises are in a constant battle to get fans away from the high definition comfort of home and into the stadium to cheer their team, advancements such as those observed in Santa Clara mean that the 49ers have one of the highest attendances in the NFL and can expect that to continue for many years.
PrintForwardTweetLikePinredditShare
Previous
Next