Fév 16, 2015 Dr Peter Harrop
Many people tell us that the Internet of Things (IoT) is much more than the narrow definition of systems based on IP addressed microcontrollers with sensors. At over $9 billion, the RFID market is huge, profitable and maturing but much growth is still in prospect on IDTechEx analysis in its annual research of the industry, RFID Forecast, Players and Opportunities 2014-2024. That is dwarfed by the market for personal electronics of course. Over the years, at least one trillion dollars has been spent just on mobile phones and their services. Personal electronics is now re-titled Internet of People at least in the USA, since most of these devices are now connected to the internet one way or another.
Personal electronics has some similar characteristics to RFID in being global, large, maturing yet growing overall. However, look more closely and there are wide disparities within these businesses. Second generation active RFID (real time locating systems) has had some success, but third generation (wireless sensor networks, specifically mesh networks) has yet to fulfil its promise.
Within the Internet of People, wearable technology, the favourite way of describing wearable electronics, is at an early stage in terms of connected devices but certain to succeed. Just look at the non-connected wearable predecessors, a multi-billion dollar market for everything from electronic wristwatches to hearing aids. Electronic glasses, jewellery, headgear, belts, armwear, wristwear, legwear, footwear, skin patches, exoskeletons and e-textiles are now involved. On IDTechEx analysis revealed in, Wearable Technology 2015-2025: Technology, Markets, Forecasts the wearable electronics business will power from $20 billion in 2015 to almost $70 billion in 2025, the dominant sector remaining the healthcare sector which merges medical, fitness and wellness. Most of the infomatics wearables will be commoditised mainly by China.
Jump in another direction and you have the market for ZigBee devices and systems, now well established but not yet huge. Many other things can be thrown in but they are so disparate in function and maturity that it is rather like herding cats when one tries to find common factors or a merged future. The hype curve shown here clarifies this from the point of view of the changing attitudes which drive investment. 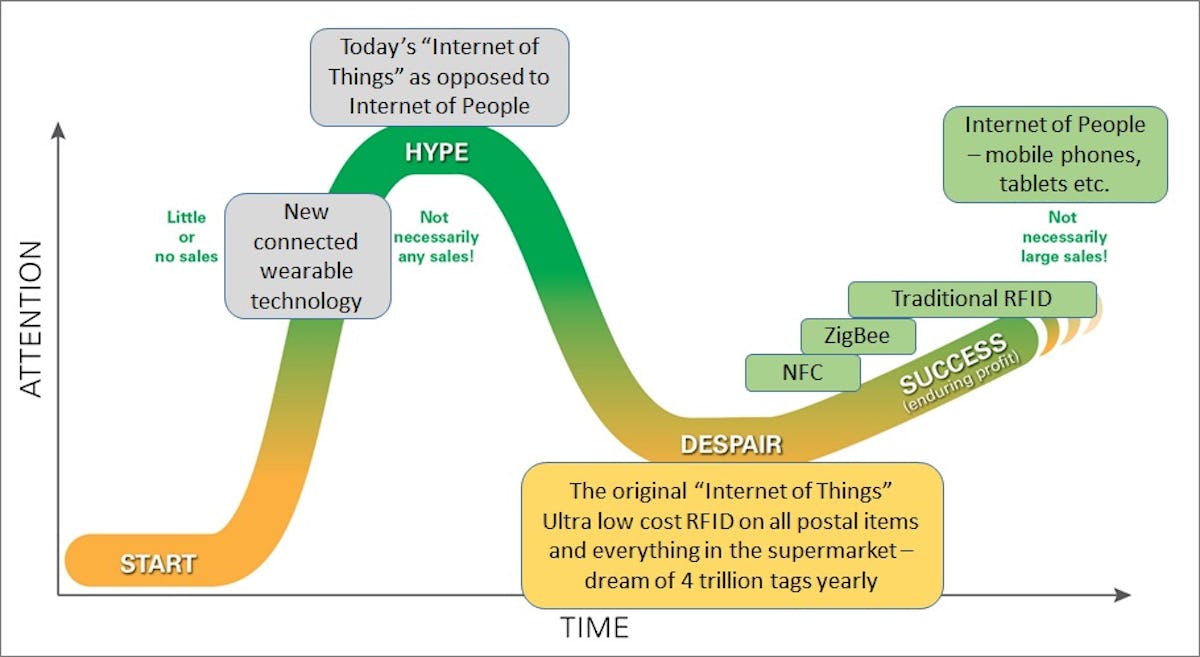 Fig. Internet of Things and related technologies in the hype curve. Source: IDTechEx report www.IDTechEx.com/IoT
It is certainly naughty to claim, as some do, that they are all targets to become IoT under the narrow definition. The IDTechEx report, Internet of Things (IoT): Business Opportunities 2015-2025 clarifies the thing-to-thing aspect, which is a genuinely new market but slow to take off due to issues of standards, technology, lack of business cases and indifferent attitudes of prospective purchasers. Certainly, very little of the planned wearable technology business is this IoT as almost all of it pivots on new and better human interfaces. IDTechEx believes genuine IoT will be large in due course but warns about the hype. IDTechEx and other analysts caution that a lot of the froth will blow off in the coming years and later a sober business will emerge.
To learn more see the relevant IDTechEx Research reports at www.IDTechEx.com/research/iot and attend the IDTechEx Event Internet of Things Applications Europe, in Berlin this April.
About IDTechEx
IDTechEx guides your strategic business decisions through its Research and Events services, helping you profit from emerging technologies.
We provide independent research, business intelligence and advice to companies across the value chain based on our core research activities and methodologies providing data sought by business leaders, strategists and emerging technology scouts to aid their business decisions.
IDTechEx Events provide an analytical, commercial outlook, taking into account market requirements, competitive technologies and development roadmaps. Attendees are presented with the full, diverse range of technologies; but the main thrust is always on end-user needs and commercialization strategies.
Learn more at www.IDTechEx.com

.
IDTechEx Research Subscriptions
Subscribing to IDTechEx research services gives you access to a wide range of our technology and market research on a given topic or across topics. It provides you with unlimited access to new related content throughout the subscription period and on-going support from our dedicated team.
The online IDTechEx Market Intelligence Portal brings in-depth market intelligence and independent analysis throughout the year, helping you to drive revenue in much shorter time frames.
See www.IDTechEx.com/subscriptions for more details.
PrintForwardTweetLikePinredditShare
Previous
Next