Mai 01, 2007 Dr Peter Harrop
With about $5 billion being spent on RFID in 2007, of which about $2.24 billion is for tags, what are the favourite specifications? High Frequency (HF) is by far the most popular RFID frequency in money spent and it is even penetrating applications traditionally served by Low Frequency (LF) such as gas cylinders, beer kegs and other metallic objects, rented apparel/ laundry and even pigs in China. Not surprisingly then, it is an HF specification that is in the ascendant. Indeed, most of the leading RFID suppliers offer HF RFID cards and systems, including ERG, Gemalto and Watchdata Technologies of China. Assa Abloy and Allflex are among the leaders primarily because they offer LF tags and systems (secure access cards and cattle ear tags respectively) and NXP, formerly Philips Semiconductors, is in the leading pack thanks to unrivalled success in selling both HF and LF RFID chips though it covers the other frequencies as well.
ISO 14443 has its origins in cards but now it is also used for tickets and labels. It involves interrogation at no more than a few centimeters in range. That means that a transaction can not be accidental and the transfer of value or commitment to pay can not be intercepted from a distance. The archetypal use is card access to buses and trains. Recent huge orders for RFID ticketing for Russia, China, Portugal and Norway of around 400 million tickets will also employ ISO 14443. Indeed most of these schemes involve RFID tickets working off pre-existing infrastructure set up for RFID cards. Typically the ticket is used for frequent travellers and the RFID ticket is used for single trips, day trips and the like. ISO is constantly extending its scope, the latest major success being the third largest global RFID market by value - e-passport tagging where the ICAO requirements are based on ISO 14443.
Next comes animal and, to a much smaller extent human tagging employing ISO 11784 and ISO 11785 usually employed in unison. However, although animal tagging is the second largest RFID market by value globally, The spend on these specifications is less that it might be because non ISO proprietary specifications notably at 125 KHz rather than the ISO 134.2 KHz are also widely employed, particularly for pets.
The pecking order of RFID specifications by RFID tag expenditure is shown below
Source: IDTechEx RFID Forecasts, Players & Opportunities
As we see above, the third most popular specification is ISO 15693 and the later and closely allied ISO 18000-3 specification. Here the range typically employed is around one meter so it is used for "hands free" secure access and supply chains involving cards, badges and labels in the main.
Behind that, the relatively new ISO 18000-6, particularly in the form of the so-called Gen2 form is gaining traction in the marketplace. Indeed, it is the basis of the IATA baggage tagging specification fixed in 2005 and it is demanded by many leading retailers and the US Military for pallet and case tagging and it is the basis of tire tagging specifications. It has its roots in supply chain management but it is appearing in asset management such as bookshops and even in secure documents such as visas. There is even a patient wristband to this specification though ISO 14443 is more common here.
As for the future, it is as yet uncertain whether HF or UHF ISO specifications will dominate such things as museum pieces, art works and individual items such as the smallest containers of drugs, where the primary need is anti-counterfeiting by establishing "pedigree". It is also uncertain whether the new active tag specifications within ISO 18000 will gain popularity.
In 2007, there will be three sectors where about $2 billion will be spent on RFID tags. They are cards, where ISO 14443 at HF is entrenched and pallets/ cases where ISO 18000-6 at UHF is entrenched. Battle lines are drawn for the third - item level consumer goods. In the second division will be military and animal RFID, both involving about $1 billion in spend in 2017, military being mainly UHF and animal mainly LF with some HF, that may become dominant if China - the biggest animal market by far - adopts HF more positively, notably to save cost while retaining a reasonable tolerance of proximate water and metal.
China is where many of these things will be decided, because, in 2007, it has become the world's largest RFID market as shown below.
Spend on RFID systems including tags in 2007 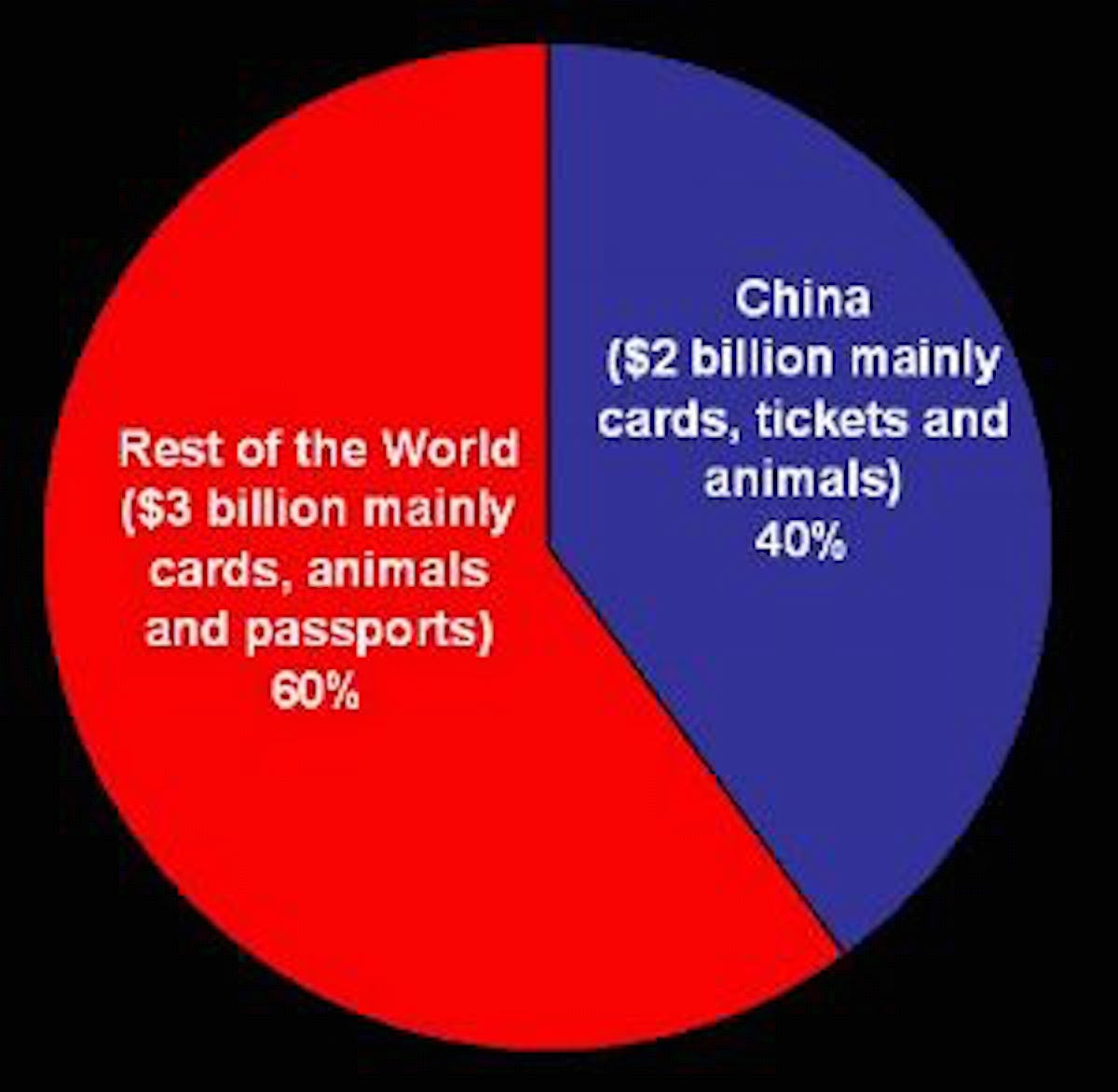