Mar 23, 2020 Dr Na Jiao
In the past decade, mobility-as-a-service (MaaS) has attracted significant attention as it holds the potential to disrupt the business model of the traditional automotive industry and the way people travel. We have seen shared mobility service companies such as Uber, Lyft and Didi offering ride-hailing services which have now become part of our daily travel options. Large auto incumbents have all invested in various forms of shared mobility services such as ride-hailing and car-sharing, claiming a transformation from an auto manufacturer to a mobility service provider. But how about the reality? Uber, the largest ride-hailing company with the most riders, is still losing over $1 billion per quarter. German auto giants Daimler and BMW pulled their car-sharing services out of the US and UK markets at the end of 2019 due to rising cost and insufficient customer interests.
Shared mobility such as ride-hailing and car-sharing are very promising business models for a more sustainable transportation system, reducing the number of cars on the road while improving traffic efficiency and convenience for passengers. However, at least for the time being, they haven't really solved the problems such as traffic congestion, and they have had little impact on private-car ownership. Currently, they are still more expensive than owning a private car; therefore they are at most a complementary option for private driving. Most people will still buy their private cars and only use those services occasionally. However, mobility services enabled by autonomous driving technologies, which allow fleet operators to eliminate the biggest operation cost - the human driver, will open a pathway towards a cheaper alternative to purchasing and owning a private car. Autonomous driving will also liberate people from the tasks of driving and improve travel convenience for those who are unable to drive or don't have a driving license which is increasingly common among the younger generation.
Autonomous driving has the potential to accelerate MaaS adoption, and therefore the arrival of peak car, in other words, the end of mass private-car ownership. Autonomous cars can become a $1.4 trillion market by 2040 in terms of sales of cars with SAE Level 3+ automation. When considering the additional revenue from autonomous mobility services, the total market value for autonomous cars and robotaxis could reach $2.5 trillion per year by 2040, according to the recent IDTechEx research Autonomous Cars and Robotaxis 2020-2040. In the next two decades, autonomy-enabled MaaS will grow rapidly to meet the increasing travel demand and in the meanwhile gradually replace private driving. However, although the ultimate goal is to achieve fully driverless, the research finds that SAE Level 5 autonomy will not be commercialized until 2030. Shared mobility services enabled by autonomous driving technologies or what we normally call robotaxis will firstly be commercialised in restricted zones under pre-defined conditions (at SAE Level 4). 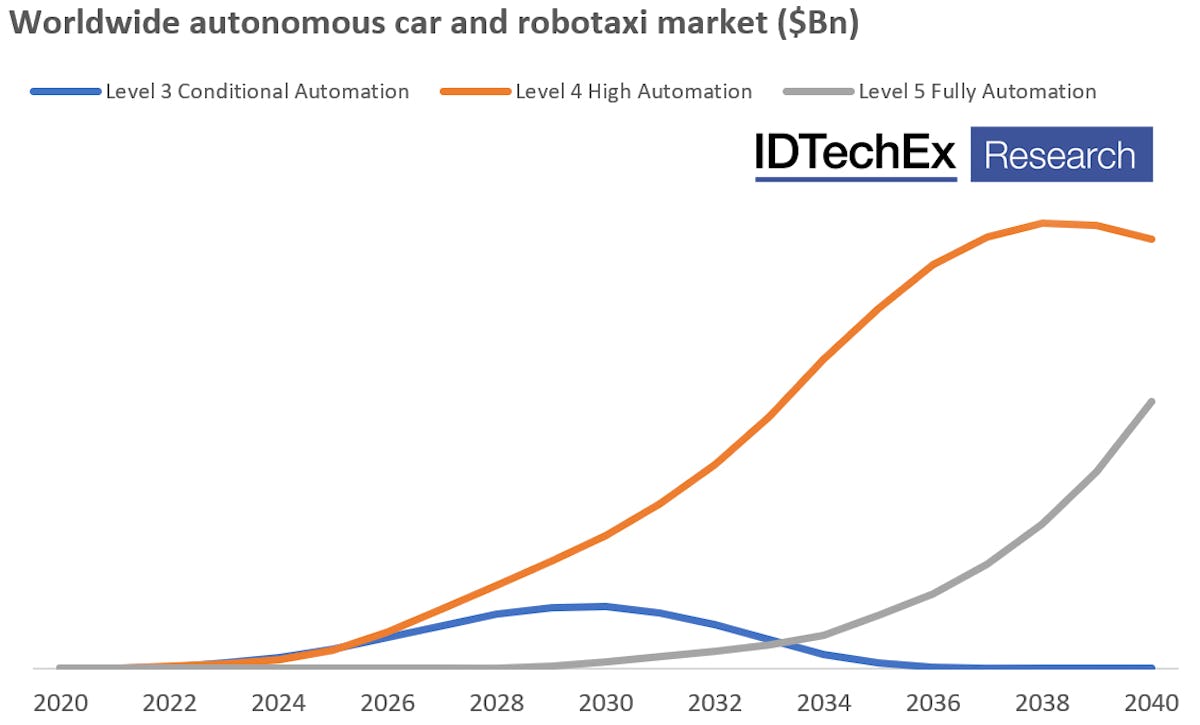 Projected value of the autonomous cars and robotaxis market. Source: Autonomous Cars and Robotaxis 2020-2040, IDTechEx.
The commercialization of autonomous driving and its business cases in various MaaS applications firstly depends on the cost of the self-driving system, which can be twice as high as the cost of the car itself at the moment. Autonomous driving requires a full technology stack of hardware such as sensors, computing platforms as well as non-hardware components including AI software and high-definition maps which are completely different from the traditional automotive approach. As the autonomous driving technologies mature as well as the scale ramps up, the cost of self-driving systems is expected to drop significantly over the next decade. IDTechEx's latest report Autonomous Cars and Robotaxis 2020-2040 builds a detailed technology roadmap and a granular market forecast for autonomous mobility. It offers an in-depth analysis of key enabling technologies including lidars, radars, cameras, AI software, high-definition maps, teleoperation, cybersecurity, and 5G & V2X. Key technology trends, as well as market players, presented for each of these enabling technologies. IDTechEx forecasts that the autonomous driving system market (the hardware and software that make the cars to drive themselves) will be over $170 billion annually by 2040, which provides enormous opportunities for multiple stakeholders across the autonomous mobility ecosystem.
MaaS could trigger tremendous change for traditional automakers as profits will shift from selling car assets to individuals towards mobility services that charge by the mile (or time). Advanced technologies, especially autonomous driving, could be the solution to the mass adoption of MaaS. However, the transformation towards autonomous mobility will not take place overnight, considering not only the technologies but also the regulatory and public perception barriers. For a more detailed analysis of the autonomous car and robotaxi market, please see IDTechEx's latest report on Autonomous Cars and Robotaxis 2020-2040.
PrintForwardTweetLikePinredditShare
Previous
Next