Jan 28, 2016 Dr Peter Harrop
Installing photovoltaics in roads seems a daft idea at first. It sounds expensive and unlikely to work unless cleaned, free of snow and ice and in direct sunlight - all too infrequent in most places. Indeed, roads are constantly dug up by utilities, repairmen and others. How do you do that with sheets of glass?
Nevertheless, a closer look reveals that most of the problems are easily overcome and even at poor efficiency, that local electricity has viable uses. True, the solar road concept varies from TNO in the Netherlands having a surface that makes regular solar panels support a truck to Solar Roadways® (SR) which is a modular system of specially engineered solar panels that can be walked and driven upon but also carry cables. These sophisticated panels contain LED lights to create lines and signage without paint. They contain heating elements to prevent snow and ice accumulation and have microprocessors, which makes them intelligent. This allows the panels to communicate with each other, a central control station, and vehicles. So far they can only support the weight of semi-trucks. The glass has a tractioned surface which is equivalent to asphalt. Eventually these panels will be available for highways, but first will come non-critical applications such as driveways and parking lots.
Solar roads 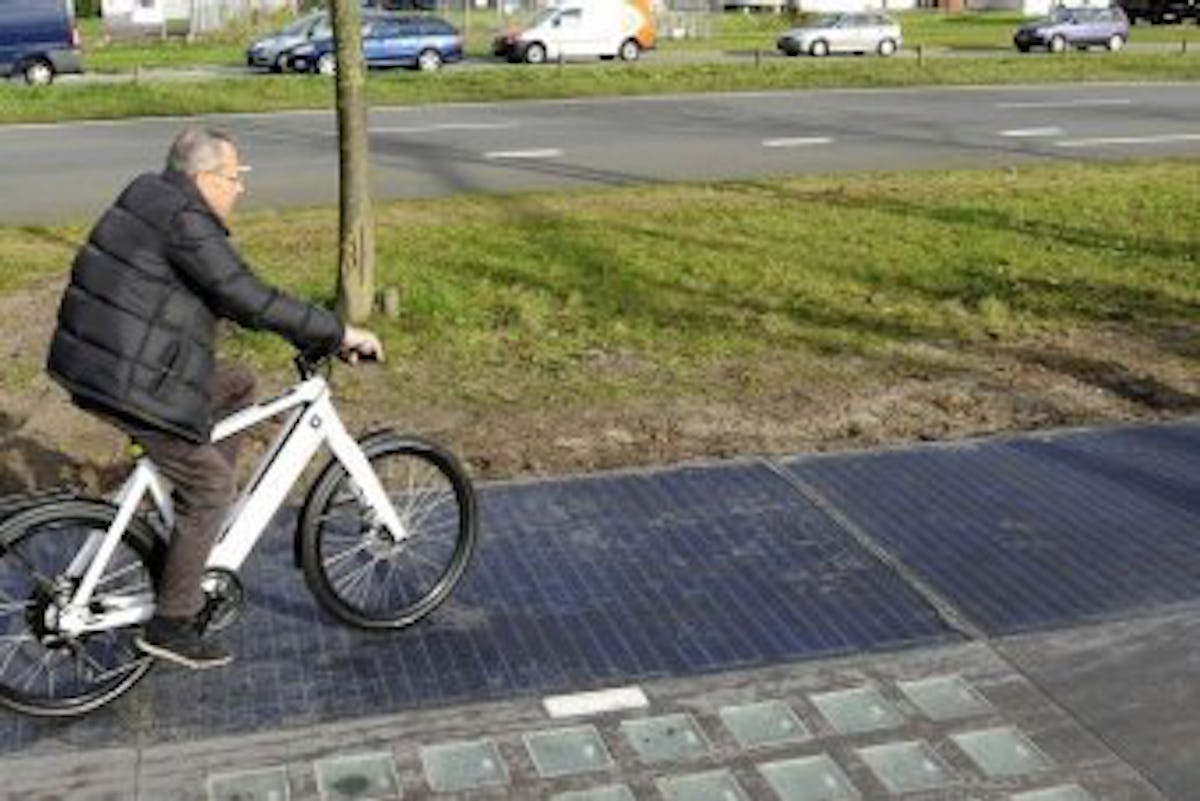 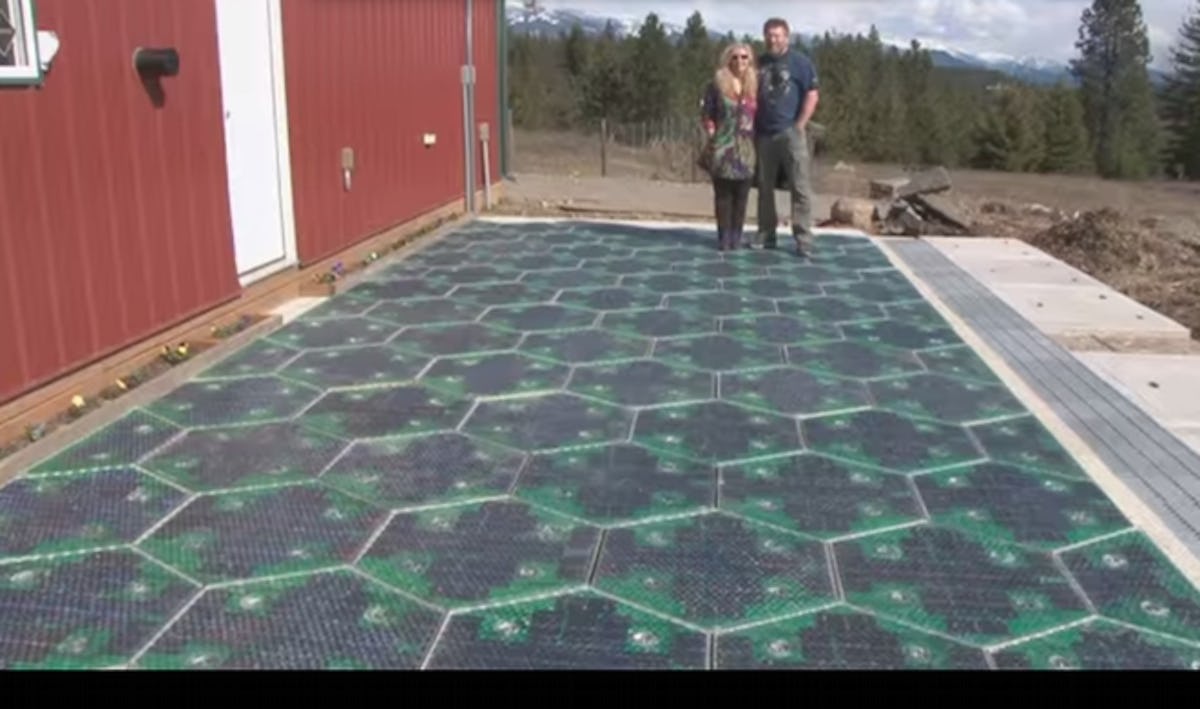 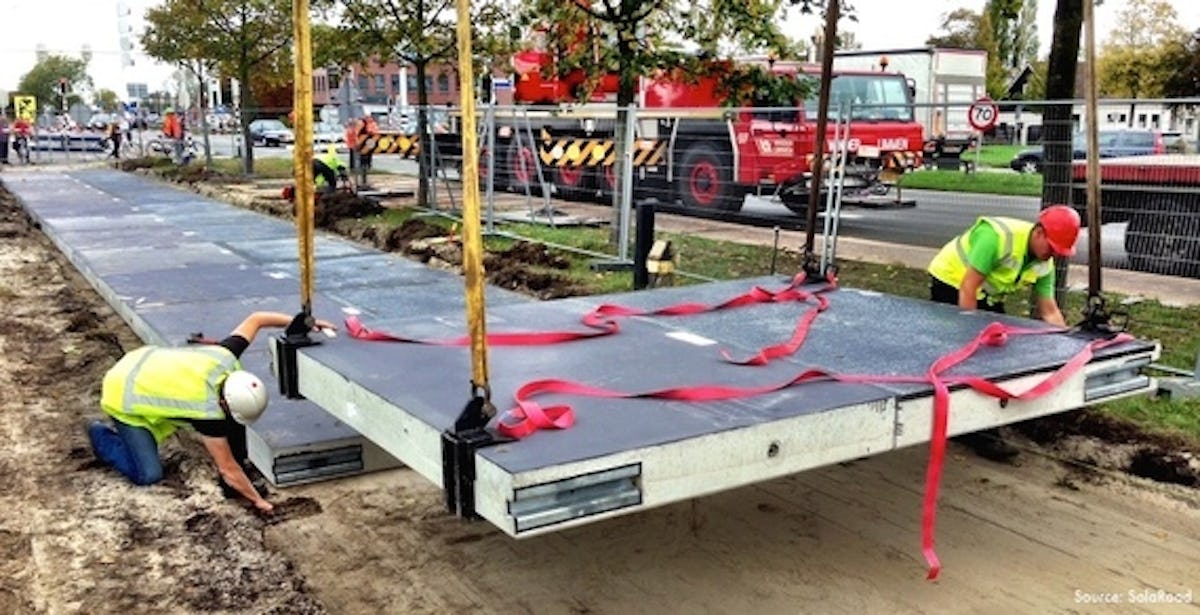 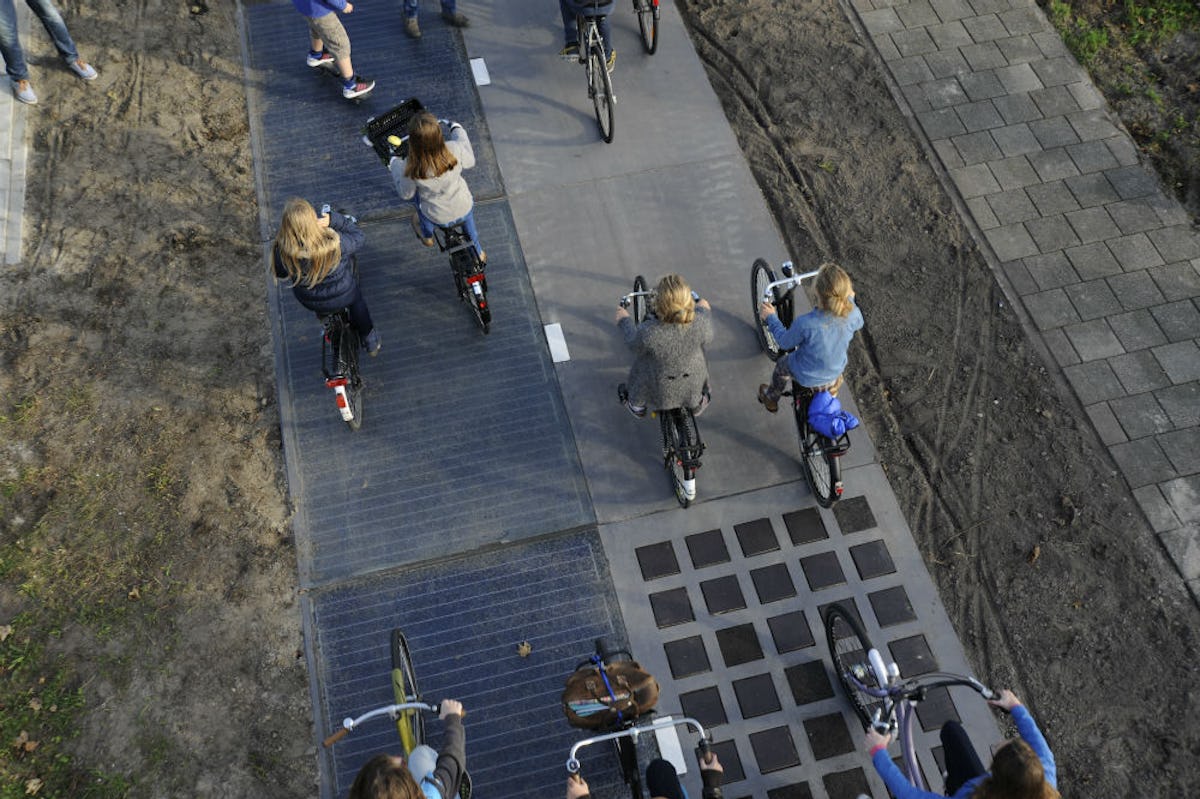 Source: Developers
The start-up in Idaho USA is readying to install the first projects now. It has completed two funding contracts with the U.S. Department of Transportation, and been awarded a third contract in November 2015. An Indiegogo Campaign took things further and the company says on its website new in 2016 that, "Our goal is to modernize the infrastructure with modular, intelligent panels, while producing clean renewable energy for homes and businesses. We'll be able to charge electric vehicles with clean energy from the sun, first on our solar parking lots and when we have enough highway infrastructure, while driving".
At IDTechEx we do not see solar roads replacing power stations: do that with a field full of solar panels not transmission and maintenance over long distances. However, they could be excellent for dynamic (in-motion) charging of electric vehicles possibly coupled with roadside wind turbines or tethered multicopters providing Airborne Wind Energy, AWE in the new jargon.
The bike path that connects the Amsterdam suburbs of Krommenie and Wormerveer is popular with both school children and commuters: around 2,000 cyclists ride its two lanes on an average day. Back in 2014, TNO made a 70 metre stretch into the world's first public road with embedded solar panels. Costing around €3m (£2.4m) and funded mostly by the local authority, the road is made up of rows of crystalline silicon solar cells, encased within concrete and covered with a translucent layer of tempered glass. A non-adhesive finish and a slight tilt are meant to help the rain wash off dirt and thus keep the surface clean, guaranteeing maximum exposure to sunlight.
The panels produced roughly 30% less energy than those fixed on to roofs but when the path was extended to 100 metres in 2016, it produced enough energy to power three households.
Sten de Wit of TNO predicted that up to 20% of the Netherlands' 140,000km of road could potentially be adapted, helping to power anything from traffic lights to electric cars. Tests have seen the solar panels successfully carry the weight of heavy vehicles such as tractors.
Not to be outdone, a subsidiary of the French construction giant Bouygues is joining in. Minister of ecology and energy, Ségolène Royal, announced the French government would pave 621 miles (1,000km) of road with photovoltaic panels in the next five years. The project aims to supply electricity to 5 million people—about 8% of France's population.
They are being produced by a French company called Colas, which is calling the project Wattway. The panels are composed of stacked photovolatic cells that "ensure resistance and tire grip." They do not require destruction of existing roadways: they can simply be added on to them. There are issues beyond cost and servicing pipes and so on beneath them. When their heating is on, animals will lie on them and be crushed by traffic. The heating will not cope with extreme cold or with deep snow or mud. To work at all the heating will have to be connected to the grid or to expensive, short-lived batteries.
Solar roads have competition. The USA is funding research into roads that harvest movement to make electricity but IDTechEx considers moving parts in such an application to be potentially troublesome. All the same, although piezoelectric walkways have not proved commercial, Pavegen is having some modest success with electrodynamic ones.
For more see High Power Energy Harvesting: Off-Grid 10W-100kW 2016-2026
and Wireless Charging 2016-2026: Phones & Small Electronics, Electric Cars & Other Vehicles
PrintForwardTweetLikePinredditShare
Previous
Next