Dec 12, 2011
The annual printed electronics award winners were announced at the IDTechEx Awards Dinner in Santa Clara, California. The awards recognize outstanding progress in the development and commercialization of printed electronics, an industry that produces a huge amount of technical innovation which will be used in many products.
The entries were judged by an eminent panel comprising of:
The award ceremony is part of the IDTechEx event Printed Electronics USA 2011 - which was attended by over 1300 people from 28 countries -the World's largest event on the topic.
In summary, the winners for each category are as follows:
Best Technical Development Manufacturing Award - Coatema
Best Technical Development Materials Award - Opalux Inc
R&D Award - Stevens Institute of Technology and US Army ARDEC
Best Product Development Award - Vorbeck and MWV
Best Commercialization Award - Peratech
Best in Show Award large booth - Novacentrix
Best in Show Award small booth - PST Sensors
Best Poster - Stéphanie Dupont, PhD Candidate Materials Sc&Eng., Stanford University 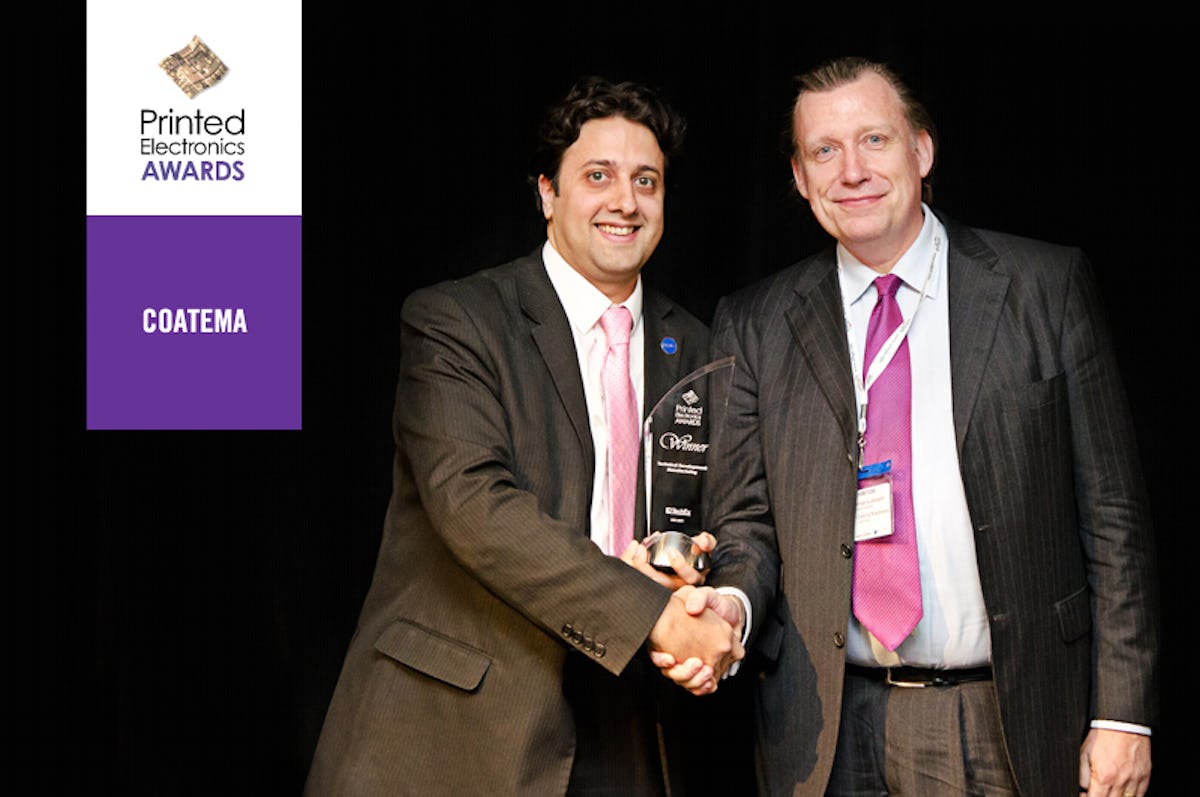 Best Technical Development Manufacturing Award - Coatema
Coatema won this award for its Smartcoater system. The Smartcoater is a R2R lab unit with a working width starting at 100 mm and a wide range of coating applications and production speeds. Complex products can be produced with a minimum use of substrate and chemistry. The base unit offers a 5‐in‐1 coating module including slot die, knife, dipping, micro‐roller and engraved roller application functions. Unlike other tools there is no need to purchase individual modules for each of these applications. In addition other modules are being added rapidly including: screen printing; flexo printing; UV spraying and others necessary for producing all layers of a product.
One judge commented, "The organization has developed a versatile roll-to-roll fabrication unit that is characterized by a high degree of adaptability to various process specifications and tolerances." 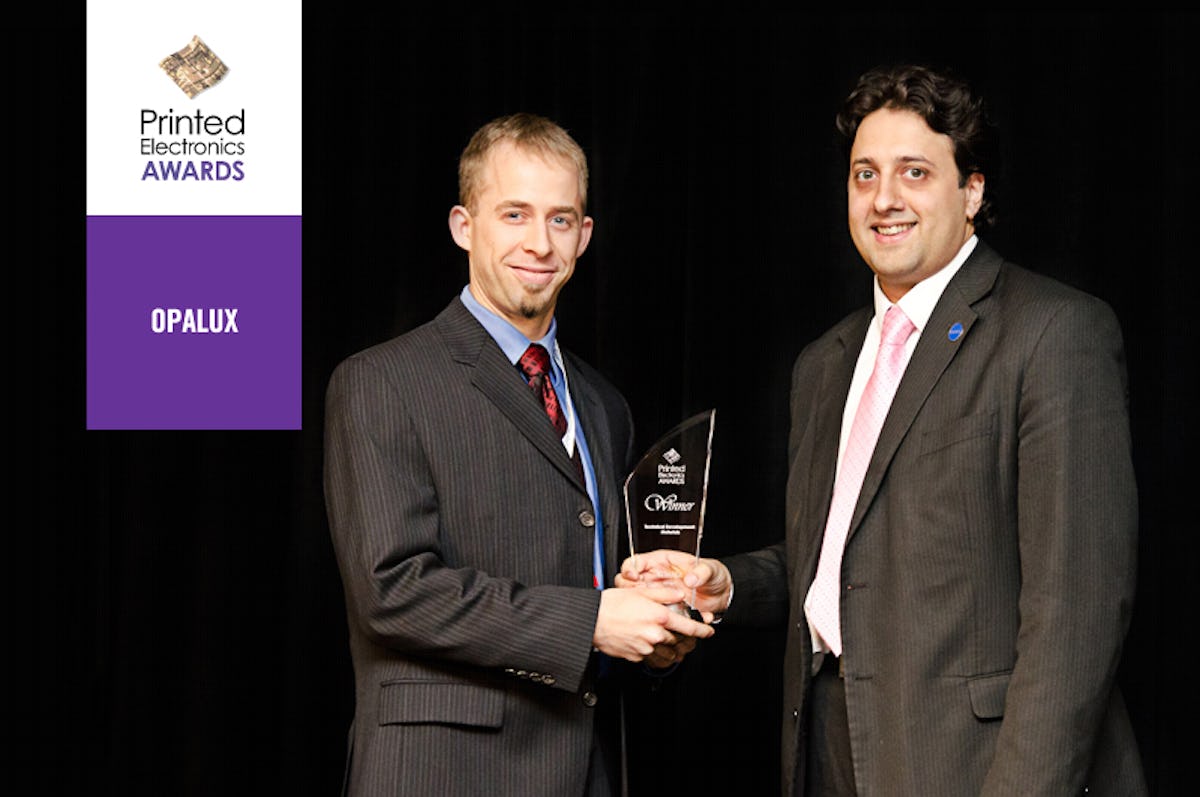 Best Technical Development Materials Award - Opalux Inc
Opalux Inc. has developed a number of technologies based on active photonic crystal materials addressed by stimuli such as pressure, heat, shear and chemical activation to effect a color change.
The company won the award for one of these technologies - Photonic Ink (P-Ink) which is electrically tuned to reflect any desired spectral colour and can also be tuned to provide UV and IR reflection. Activation at voltages of less than 1.5 V and microampere currents gives bright, highly saturated and bistable color states that can be switched at high speeds.
One judge reported, "Advantageously, the devices are able to be powered with low voltages and currents that are compatible with standard consumer electronics devices and can be switched at high speeds, thereby creating abundant prospects for reconfigurable signs and displays, active camouflage, and smart cards, to name a few." 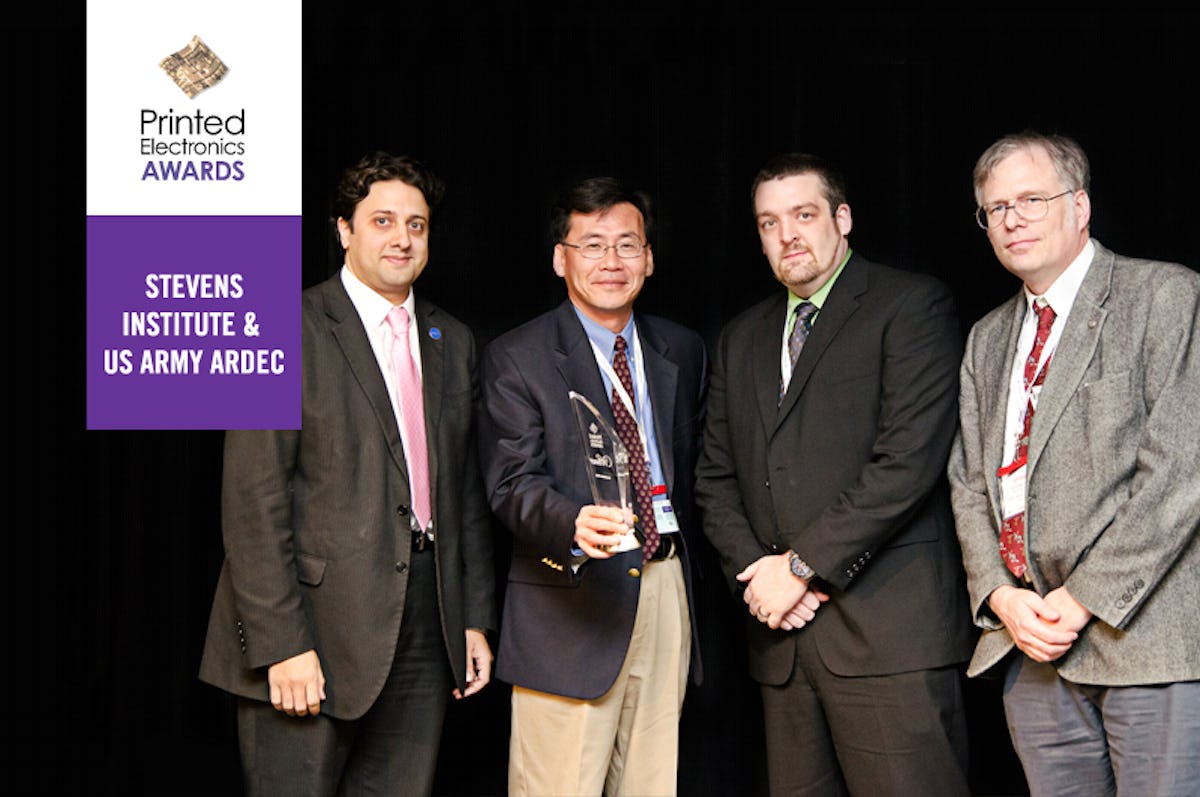 Academic R&D Award - Stevens Institute of Technology and US Army ARDEC
A team of researchers from Stevens Institute of Technology and US Army ARDEC have been exploring the evaporative assembly of graphene oxide (GO) nanosheets during inkjet printing, as a transformative means of producing 2D and 3D graphene micropatterns for a variety of flexible electronics applications. The ability of producing graphene oxide supercapacitor electrodes by inkjet printing and subsequent thermal reduction was demonstrated by the researchers. This approach provides a scalable manufacturing platform to fabricate economically viable supercapacitor electrodes particularly for miniaturized flexible supercapacitor applications.
One judge stated, "Supercapacitors have attracted considerable attention in the research environment and have witnessed substantial use in industrial applications that must mitigate the inadequacies (i.e. reduced capacity) of standard electrolytic capacitors. Despite this fact, supercapacitors are currently not amenable to low-cost, high-throughput fabrication techniques. The research conducted by the group demonstrates that such supercapacitors can, in fact, be fabricated along the same production lines as conventional thick-film capacitors used in nearly every electronic device today, thereby promoting further implementation of these useful devices." 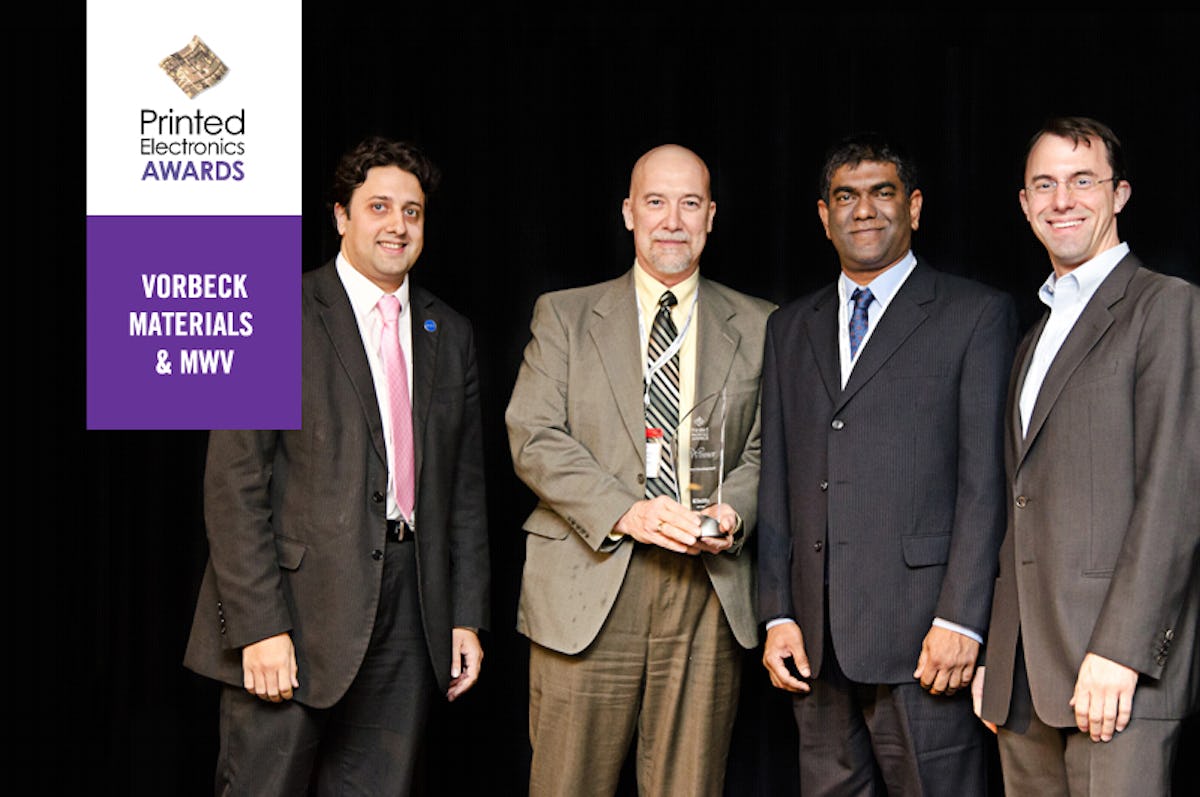 Best Product Development Award - Vorbeck and MWV
Vorbeck and MeadWestvaco (MWV) won this award for the new anti-theft retail package product. Vorbeck's Vor-ink™ has provided the enabling technology for the development of the MWV package product.
This new technology, called Siren, is part of MWV's Natralock™ product line, and will be on store‐shelves at major retailers including Home Depot in early 2012. This unique design will prevent theft or tampering by setting off an alarm on each individual package itself if cut, torn, or upon attempted theft. This adds a level of protection over the standard EAS tags currently in use, which only set‐off in-store alarm towers if the whole package is removed from the store.
Since Siren technology is embedded within the package itself, it allows high-theft products to be displayed as any normal package would be, giving the customer full access to the product and information rather than having to be protected behind locked cases, thereby improving product visibility to influence buying decisions.
One judge commented, "This is the winner for several reasons. One, it is a very significant market segment. Two, it is one of the closest things to true "printed electronics". I like the fact that it is a printed graphene ink. MeadWestvaco, partnering with Vorbeck Materials has developed a breakthrough technology that will impact the retail chain in a significant way. Loss prevention is a huge drain on retailers and this solution directly addresses a significant need." 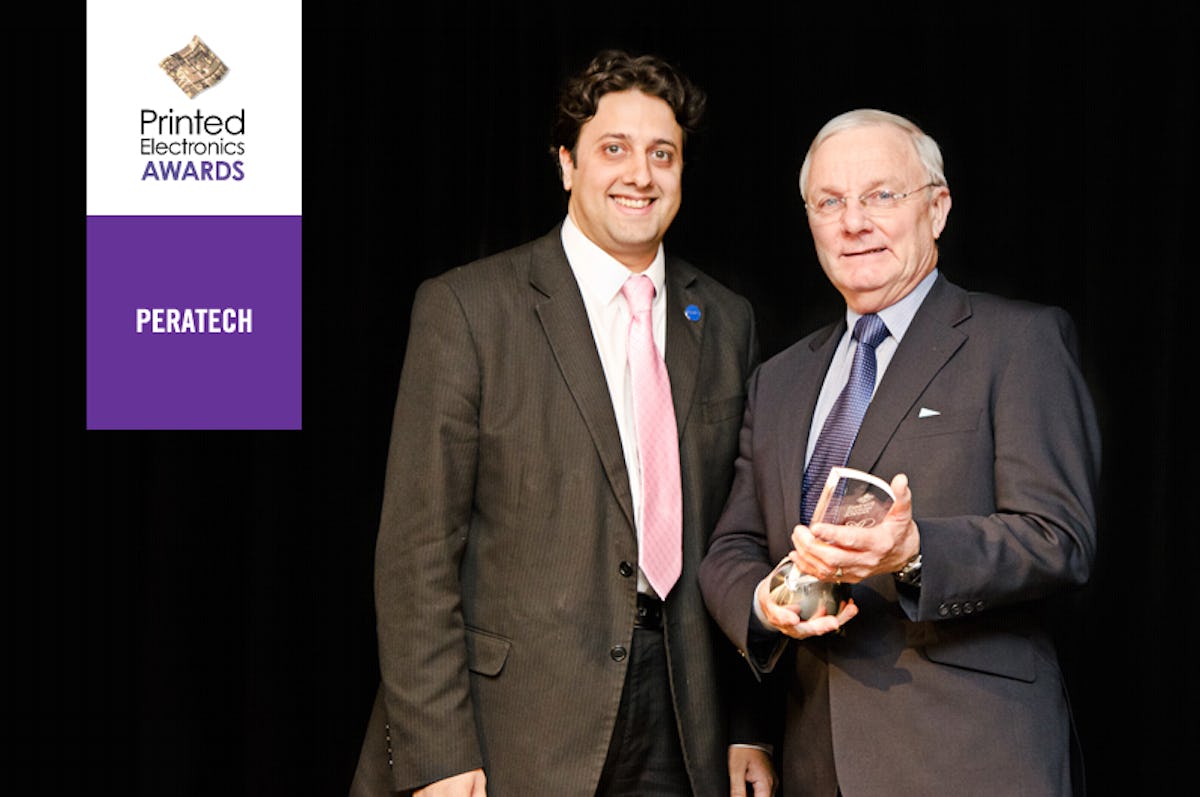 Best Commercialization Award - Peratech
Peratech is the inventor of Quantum Tunnelling Composite (QTC) technology. QTC's are electro-active polymeric materials made from metallic or non-metallic filler particles combined in an elastomeric binder. These enable the action of 'touch' to be translated into an electrical reaction, enabling a vast array of devices to incorporate very thin and highly robust 'sensing' of touch and pressure. QTC's unique properties enable it to be made into force sensitive switches of any shape or size. QTC switches and switch matrices can be screen printed allowing for development and integration of switches that are as thin as 75 microns.
Having spent its initial years researching and understanding this completely new area of material science, Peratech is now focussed on commercialising this technology. It uses the well proven IP licensing model that comprises of researching and designing a solution to a customer's problem and then licensing the design of this solution along with supplying the required form of QTC. The first major successes are two license deals worth several million dollars.
One judge commented, "The Company's highly novel technology enables the introduction of a new class of touchscreens that overcome several technical hurdles that challenge conventional resistive and capacitive touchscreen technologies. The Company has attracted several customers who have taken steps towards licensing the technology, and thus has the potential to be a major contender in the haptics domain."
Best in Show Award
This award was chosen by attendees at the event, who voted for what they thought were the most impressive exhibitors.
Best in Show Award large booth - Novacentrix
Best in Show Award small booth - PST Sensors
Of the posters in the exhibit area, the best poster was awarded to Stéphanie Dupont, PhD Candidate Materials Sc&Eng., Stanford University.
The next IDTechEx Printed Electronics awards will be held at the European event, in Berlin, Germany on 3-4 April 2012.
For more details see www.IDTechEx.com/peEUROPE
PrintForwardTweetLikePinredditShare
Previous
Next