Aug 15, 2016 Dr Peter Harrop
Management theory says that a manufacturing company should only vertically integrate - like Tesla with its Gigafactory - when the technology is mature so you can pare off the last pennies in cost without the technology being superceded. Lithium-ion batteries have been around quite a while but Nissan for example found itself buying from LGChem with a battery better in some ways not exclusively from its own battery joint venture. In fact, lithium ion batteries face a stream of radical changes now such as silicon anodes, higher capacity cathodes, non-flammable, non-toxic then solid state electrolytes, larger formats and so on.
While Tesla is building its Gigafactory in Nevada, Nissan has started talks with Japanese and Chinese companies to sell its stake in the battery production joint venture it created with NEC a decade ago. It says buying batteries from outside suppliers will help it hold prices down. There is probably also an intention to avoid huge investments needed in batteries from starving its automotive business of funds.
The joint venture, Automotive Energy Supply Company AESC, was set up in 2007 to make lithium-ion batteries for Nissan's LEAF electric car and other hybrid vehicles. It is owned 51% by Nissan and 49% by NEC. On some counts, AESC has the second-largest share of the world market for lithium-ion batteries for cars with $362 million in sales in the fiscal year that ended in March but BYD has jumped to number two in the first half of 2016 both mainly because of in-house demand though.
Nissan is looking to sell its entire stake in the joint venture. It also plans to sell its independent battery manufacturing operations in the USA and Britain at a time when Sony has just sold its Li-ion business to Murata.
With a Silicon Valley mentality, Tesla has shown it can manage rapid change such as that facing it in lithium-ion batteries. If there is a shortage - quite a possibility - then having your own factory will be a good idea but if there is a glut then selling your spare output to competitors in car manufacture will be tough. Time will tell who was right.
Panasonic, which is a partner with Tesla Motors in the Gigafactory venture, is the world's largest battery company. It has expressed an interest in buying Nissan's stake in AESC. Nissan expects to select a buyer by the end of 2016 speeding the inevitable consolidation in the battery industry as lead acid sales collapse and lithium-ion proves to be a battle of the titans.
Number four, LGChem probably has larger external battery sales than BYD, AESC or anything external that Tesla plans in the coming decade so it is the elephant in the room being outside the automotive manufacturing business - an independent supplier with excellent technology. 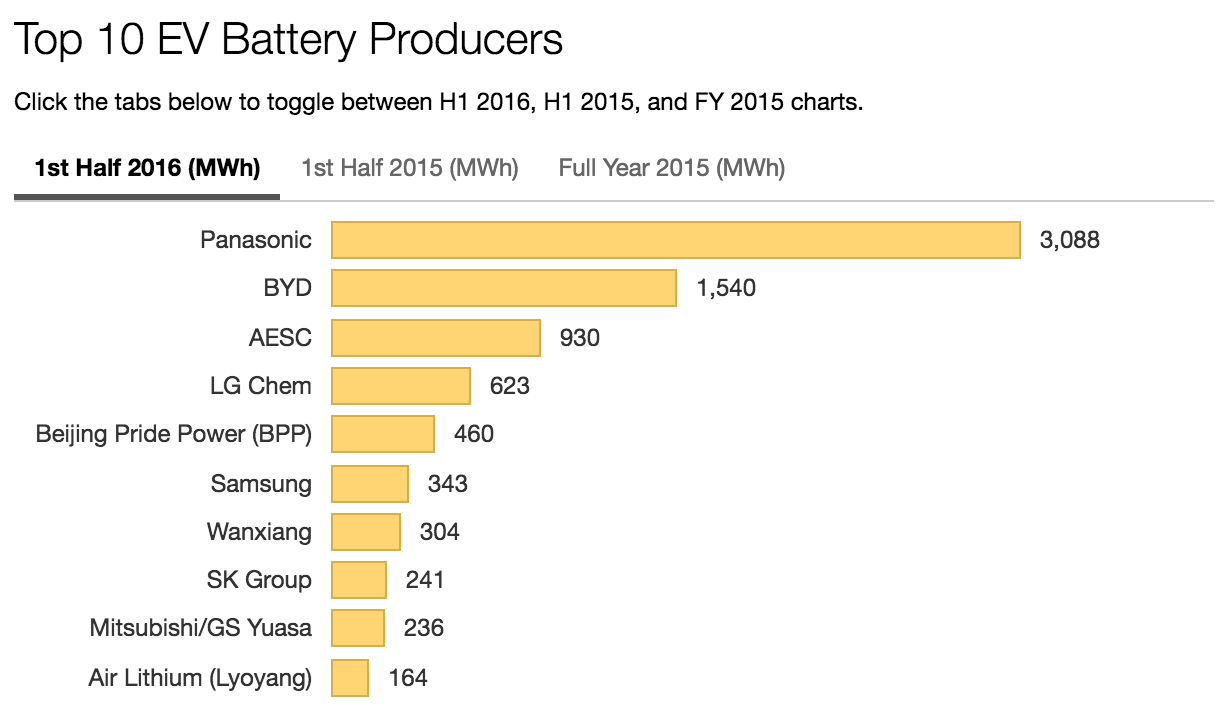