Jul 08, 2009 Dr Peter Harrop
As forecasted by IDTechEx in RFID Forecasts, Players, Opportunities 2009-2019, there has been a surge in orders for RFID in 2009. Despite the world's largest RFID project, the $6 billion China National ID card scheme, being completed a year earlier and now being just at replacement level, the global RFID market is rising 5% this year to $5.56 billion. This is in the face of the global financial meltdown which has caused some car production, for example, to plummet by 50%. In many applicational sectors, RFID orders are up 10%. Primarily this is driven by governments doing two things. Increasingly, they make it a legal requirement to fit RFID, recent examples being dogs in New Zealand and four legged livestock other than cows in Europe. Secondly they come up with huge sums of money to buy RFID. This varies from local governments committing to non-stop road tolling and library tagging to national governments increasingly buying military, fish monitoring, national ID card, passport and other forms of RFID.
Nonetheless, suppliers struggling in the wrong sectors often express disbelief at the size of the IDTechEx projections, because we see a quintupling of this market in the next ten years. Here are three rain checks to put their minds at rest. Firstly the sharply increasing IDTechEx RFID Knowledgebase of projects now numbers 3800 in 110 countries, the leading countries being shown below. Secondly, the table below lists just a few of the RFID orders and projects around the world and they come to over ten billion dollars in value. Thirdly, the size and growth of RFID sales by the leading suppliers is consistent with our figures. This really is a major industry that is substantially recession proof and IDTechEx has annual reports detailing activity in most applicational sectors.
Figure Top ten countries by number of RFID projects. China excludes Macao and Hong Kong 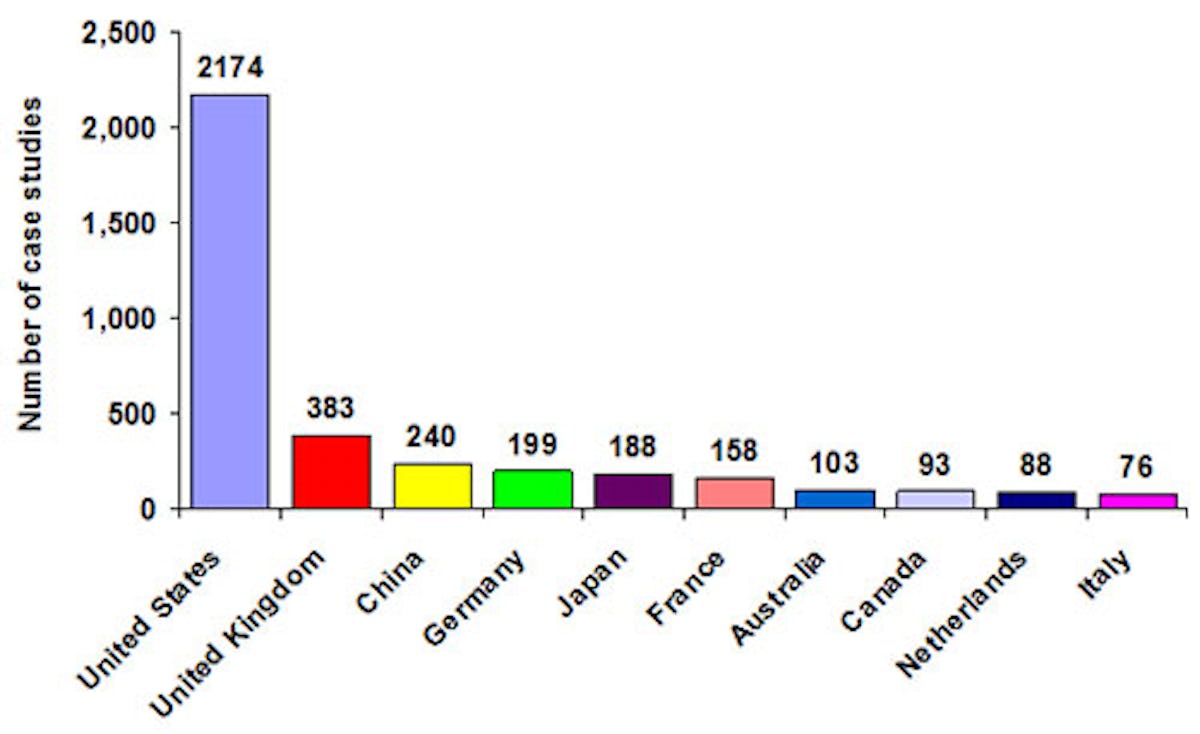 Table Examples of applications of RFID and typical benefits

Most of the action has been in the USA, where the largest orders continue to be placed, in the UK, China , Germany and Japan. The largest expenditure on RFID is currently in the USA followed by China and Japan. CSC and IBM have landed an order for $570 million to upgrade the UK e-passport applications and enrolment system. Unisys was one of four companies selected by the US Army Program Executive Office-Enterprise Information Systems for a contract for the Radio Frequency Identification III (RFID III) program. This contract has a total ceiling value of $428 million. Currently, RFID tags are attached to approximately 125,000 shipments of US military supplies each week. Transcore landed $63 million for RFID based non-stop tolling in Florida. In addition, the USA has seen many multimillion dollar RFID orders placed recently, one example being a $2 million order on Awarepoint to provide a Real Time Locating System for Jackson Health System, continuously tracking 12,000 key assets. For most of these suppliers, the new orders are their largest orders ever.
IDTechEx has had two members of staff touring Japan and China and they report something very different out there. This year, the Chinese are putting RFID where it is not encountered in the West such as in cheques and on fast fishing boats to prevent collisions. However, China is also making the world's largest investment in installing RFID throughout its factories and supply chain in order to underpin the nation's pre-eminence in manufacturing. An order for $8 million of RFID enabled casino chips has been placed by establishments in Macao and the Philippines. Hong Kong is particularly active in RFID. Avery Dennison, Motorola and Print-O-Tape recently landed an order for 70 million baggage tags and associated readers for the airport for example, value being over $15 million. Japan continues to buy over 90% of the world's RFID enabled mobile phones. They can be used to buy access to public transport as well as goods in many retail shops.
However, there is increased activity elsewhere as well, including Gemalto servicing an order for 900,000 RFID National ID cards for Lithuania, probably valued at more than $6 million. Infineon received a $24 million order for passport RFID chips in India and Axcess clocked $3.5 million for a port security infrastructure RFID system in Trinidad. Moscow Metro has ordered about $10 million of RFID tickets. RFID is certainly more widespread, with the IDTechEx RFID Knowledgebase tracking what are now 3800 projects in 110 countries. In China, the number of RFID projects tracked has more than doubled to 281 in only two years.
On the technology front, Wireless Sensor Networks - so-called Third Generation Active RFID - are being newly offered by a large number of companies. They have taken many fairly modest sized orders initially but enough to make the market for WSN overtake the market for RTLS - Second Generation RFID -though the two do not yet compete with each other. RTLS first took off one year earlier when over 100 US hospitals adopted it.

The V curve of sustainable profit

RFID obeys the laws of the marketplace like any other industrial activity and these and recent restructuring in the form of fund raising, acquisitions etc are detailed in the IDTechEx report RFID Profit, Fund Raising and Acquisition Strategy. The V curve of profit is particularly marked, as can be expected with a relatively young industry in terms of market growth. Small niche players such as Allflex, Awarepoint and Datamars tend to have stable and profitable RFID business as do the those with large RFID activity such as Huahong of China, Affiliated Computer Services, CSC, NXP, Unisys, IBM, Lockheed Martin, NTT DoCoMo, Sony, Gemplus and Assa Abloy. Unfortunately the names more commonly associated with RFID typically struggle to maintain an RFID business of no more than $50 million because they neither have premium pricing nor economy of scale. They neither have global reach nor local or industry specific knowledge. Indeed, most of them have compounded their demise by unwisely avoiding the system supply and system integration end of the value chain and even products working at the favourite passive RFID frequency HF or in active RFID where, in each case, it is easier to make money. Observers focussing on these struggling but high profile RFID activities do indeed puzzle about how the RFID business can be so big. Expect these companies to refocus or exit the business in the next few years as their investors question requests for further substantial funding.
All these powerful forces, and the emerging markets, will be analysed in the conference and exhibition RFID Europe in Cambridge UK 29-30 September. For more information please see www.IDTechEx.com/RFIDeurope.
PrintForwardTweetLikePinredditShare
Previous
Next