2018年2月14天 Dr Khasha Ghaffarzadeh
This new report by IDTechEx, Conductive Ink Markets 2018-2028, provides the most comprehensive and authoritative view of the conductive inks and paste market, giving detailed ten-year market forecasts segmented by application and material type. The market forecasts are given in tonnage and value at the ink level.
It is based upon years of research. In the past five years alone, our analysts have interviewed more than 100 industry players, visited numerous users/ suppliers across the world, attended more than 45 relevant conferences/exhibitions globally, and worked with many industry players to help them with their strategy towards this market. Prior to this, our analysts played an active role in commercializing conductive pastes, particularly in the photovoltaic industry.

The conductive ink industry had a great year last year largely thanks to the record boom year in the photovoltaic industry driven by demand in China. This rising tide lifted everyone regardless of their market share standings. Indeed, many in the value chain have been working at or near full capacity to service this rising demand.
The industry is however still moving ahead with its diversification drive. Here, the industry seeks to find the next big thing, hoping to lessen its overreliance on the photovoltaic industry and other mature industries in which strong competitive pressures persist.
To this end, the suppliers had been developing as broad a product portfolio as possible seeking to plant their flags in nascent high-potential markets. This process is now in full swing with several markets transitioning towards commercial fruition this year.
The touch screen edge electrode market continues to be shaped by the perennial trend to narrow the bezel. This trend has already led to the introduction of photo-patterned and laser-cut pastes. The emphasis however has largely shifted onto cost, pushing supplier to aggressively slash prices to keep market share, to deter new ink entrants, and to fight off sputtering.
Stretchable inks have been in active commercialization mode for several years. In this time, the number of suppliers globally has multiplied, eroding technical and price differentiation but also helping accelerate market creation. The industry has already launched and sold products and most suppliers expect further customer qualification this year.
In-mould electronics (IME) is transitioning towards commercial orders too. Conductive ink suppliers multiplied in the past few years, mirroring the developments on the stretchable ink front. The commercial emphasis shifted from seeding the market and demonstrating prototypes to proving volume production and reliability as well as to resolving potential IP issues.
Sprayed on-chip conformal EMI shielding coatings is a hot area. Sputtered coatings have already been adopted by leading players, but now paste companies actively seek to provide a compelling alternative that is based on non-vacuum, low-CapEx, large-area and high-throughput spraying process. The engagement with small- to mid-sized device makers, particularly in China, is highly active but the big question this year is whether a leading brand will qualify the technology.
Highly thermally conductive die attach pastes are in favor. The rise of electric, connected and/or autonomous vehicles creates more demand for high power and high temperature electronics. A promising trend is now to use nano or hybrid silver fillers to reduce the sintering temperature and eliminate the need for external pressure. This technology is on the cusp of major success, and barring last minute surprises, is likely to be adopted by electric vehicle producers this year.
The installed base of industrial aerosol machines is expanding, opening the door further to the sales of qualified inks in 3D antenna printing. Directly printed metal mesh has witnessed accelerated technological progress, overcoming its limitation to achieve sub 5um linewidths. Indeed, it is already in small scale commercial production, but there is some way to go before it can become a leading market. Hybrid metal mesh continues with its stop-start progress, expanding into use cases such as transparent antennas for consumer electronics.
The installed base of hobbyist-level desktop PCB printers has expanded but utilization - thus material consumption - is low. The sales of final (vs. beta) version of professional multilayer printers has also started but these are still in an early phase of market diffusion. Print-seed-and-then-plate approach in the PCB industry is also largely on hold due to the lack of a clear cost or performance benefit compared to incumbent processes. However, Cu inks printed PI substrates are actively being pushed for the FPCB applications. This approach may offer a cost advantage when surface coverage is low (<20%).
Cu is also making progress for RFID antenna printing although new suppliers still need to demonstrate production beyond lab scale. Multilayer ceramic capacitors (MLCC) also continue to be sizable industry with sales into the trillions of units, creating a significant market for screen printed Cu (and Ni) powders. The printed digitizer market for consumer electronics did not grow as previously anticipated, however printed large area digitizers, often based on Cu, are finding use in large-area interactive whiteboards.
3D printed electronics (3DPE) will remain an innovation opportunity front for low-temperature inks compatible with a variety of substrates, but progress will be subdued in sales of dedicated 3DPE printers. Printed large-area piezoresistive, capacitive and biosensors are set to become one of the largest constituents of the greater printed electronics industry. Despite technology improvements, printed transistor and memory will remain in search of applications. E-readers will accelerate transition towards large wall-sized displays, creating new demand for inks. Large-area LED arrays made with printing will slowly find their way into the market although competition from FPCB remains. Thin film non-Si photovoltaic will likely see the commercial adoption of silver nanoparticles.
There are numerous other applications that are being developed for conductive paste which we consider in our report in detail. Examples include heating, battery pack and plant heaters, frequency-selective windows, and many more.
All together we forecast that non-core and emerging markets will grow to become a $580m market opportunity by 2028. This is shown below. Note that here volume applications like touch screen edge electrodes, automotive (exterior), photovoltaics, MLCC and so on are excluded.
For more details, we refer you to our comprehensive report Conductive Ink Markets 2018-2028: Forecasts, Technologies, Player. 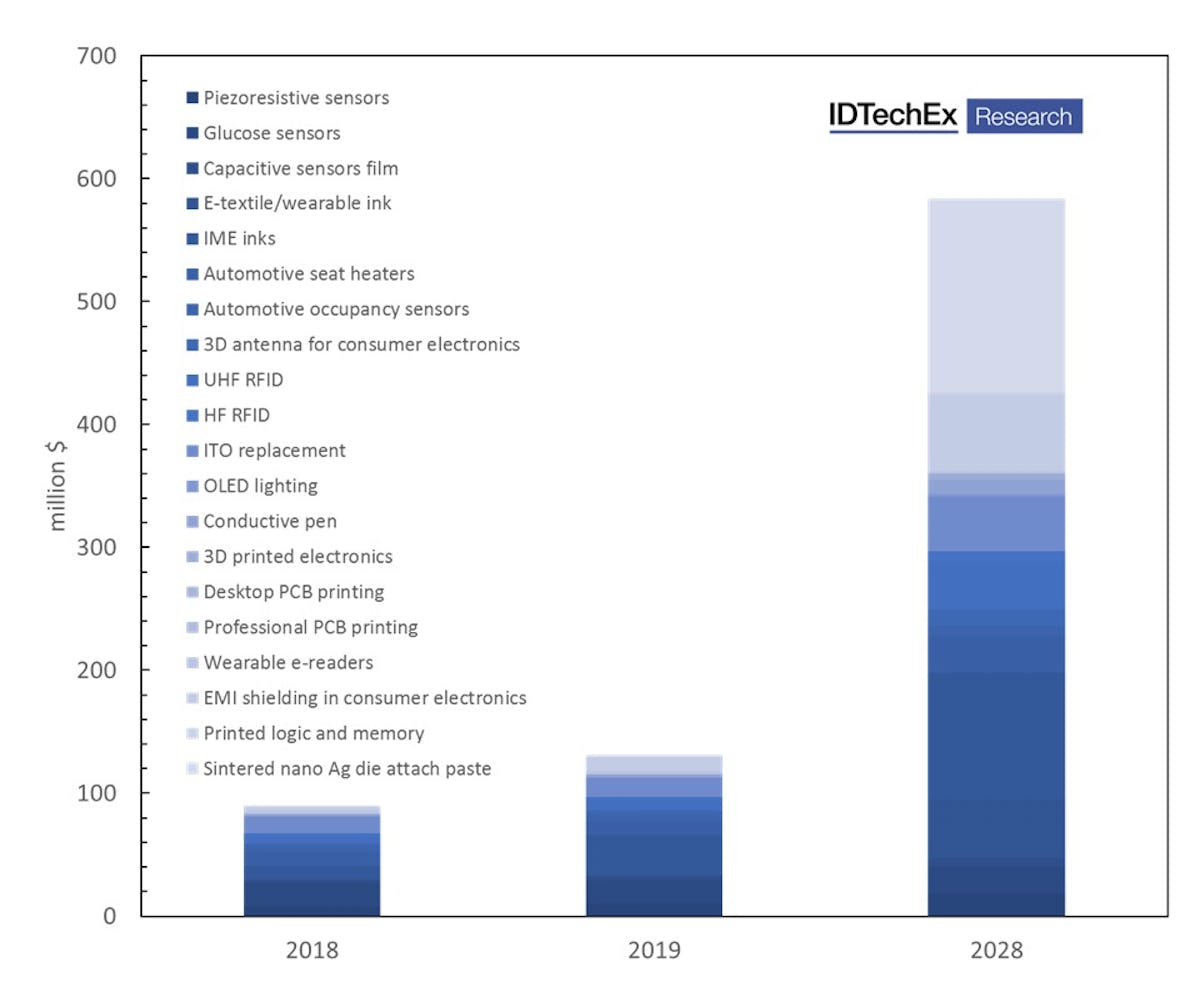