2014年4月11天
Last year finally saw the kick-off in sales of electric cars with 2014 seeing a new impetus on fuel cell cars. Against the background of contentious debates around the world in relation to the environmental impact and costs of shale gas production, hydrogen fuel cells cars are being seen with new hope.
Companies like Toyota, GM and Daimler supported by Shell and Total, have announced the launch of their fuel cell models in California in 2015 (Toyota) however other companies such as Volkswagen have stated that they do not see a future for fuel cell cars. Tesla and Nissan don't place high bets on fuel cell cars (particularly Tesla), even considering that Nissan has a foothold in ICE, electric and fuel cell cars.
Paying attention to who says what, it is important to consider what the different market positions are of each player. It is not Toyota, or Daimler the world's main car producer in the world, this position now belongs to Volkswagen (2012 figures) and in addition it is the best car seller in China (2013 figures). This is relevant because the automotive industry is slowly recovering from the economic recession and China is today the highest growth and largest car market in the world. Volkswagen market share is considerable in China because it is 3.3 million units ahead of its closest competitor, General Motors. One year before the launch of its fuel cell vehicle, Toyota's CEO, indicated that the company's sales in China would continue to be overshadowed by the poor Sino-Japanese relationship.
In the USA, 39% of the shale gas was produced there against China's 1% in 2013 according to US DOE. There is a perception that shale production will bring cheap gas prices which will produce cheap hydrogen as fuel 1,2. The main source of industrial hydrogen comes from natural gas reformation.
A recent comment by Oxford Institute of Energy Studies 3 casts doubts on the cost efficiency of shale gas production in the USA and definitively in Europe. The study argues that since the shale boom began, related write-downs by several of the largest shale players are now approaching $35 billion. Many players in the industry have already noted that the revolution is not as technically and financially attractive as they expected and could take decades before a similar business could develop outside North America.
On the financial performance side this study quotes a recent analysis covering 35 independent shale gas - and tight oil-focused companies active across the major US plays and accounting in the US at Q3 2013, shows that over the past six years their financial performance has progressively worsened 4. A key finding of a broader US E&P benchmark quoted by the study, was that both exploration and development costs are increasing rapidly - by more than 20 per cent in 2012 alone4. Therefore the oil and gas industry has experienced falling net income margins over the past few years.
If the shale industry does not validate its business model, the idea of cheap gas (and cheap related hydrogen for fuel cell cars) will only be a dream, and once again fuel cell cars will remain the car of the future.
Now let us take a look at how efficient fuel cell cars are, but rather than just narrowing it to the car efficiency, we need to consider the whole system efficiency, that is the so called well to wheel. We can take the basis of the study presented below. 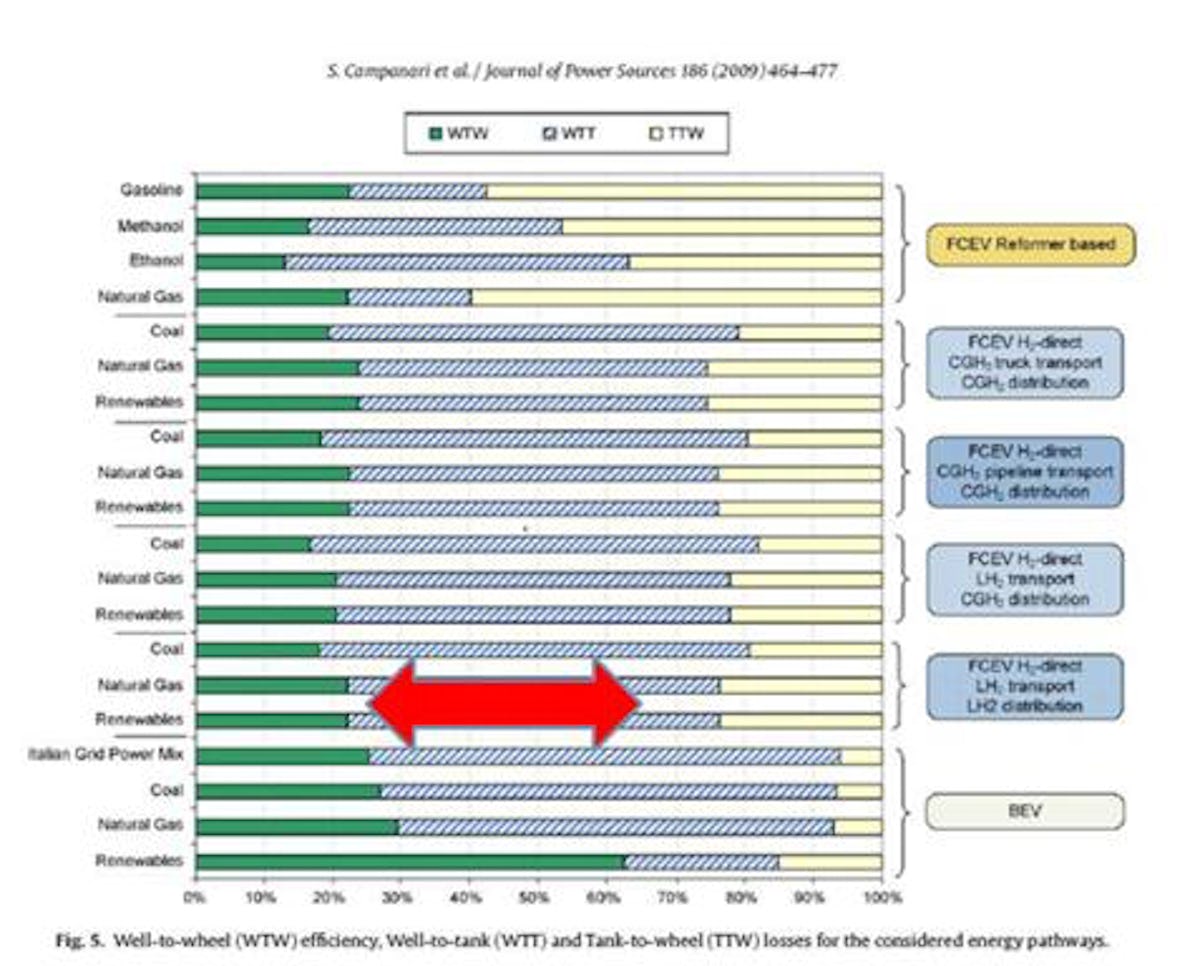 As we can see, Well-to tank losses (blue striped bars) from fuel cell technology are huge from hydrogen sourced from any energy sources (coal, natural gas and renewables) reaching around 60 percent of inefficiency. You may say that battery electric vehicles have similar inefficiencies when considering electricity generated by gas and coal, however you need to take a look at the bar at the bottom and you will see that renewable energy supplied electric vehicles have only 15% energy losses from Well-to-wheel. Earlier this year, Toyota commented to a colleague analyst in Canada that the company was working on the efficiency of the fuel cells. Whilst this is an area of opportunity (as can be noted from the 20% losses at Tank-to-wheel level), efficiency improvements are mostly required in an area out of the control of Toyota (or any other automotive manufacturer), this is the inefficiencies arising from the energy transformations in the hydrogen supply chain.
Finally fuel cell cars are still too expensive! This is due to the large amounts of platinum required in fuel cells and the price of other components. Fuel cell cars have now reached a price of approximately $100,000 USD. At this level they still have a long way to catch up in price to compete for mass adoption.
A key lesson from the Supercapacitors Europe 2014 event, was that the future electric vehicle industry regardless of hydrogen fuel cells or batteries - both will have longer lifetimes and perform better with supercapacitors. This is because neither fuel cells or batteries can cope with high power surges (i.e. acceleration) and if they are exposed to them (which is desirable by most drivers) they will reduce their operational lifetime, this is relevant given that both batteries and fuel cells account for at least 50% of the cost of both fuel cell and electric cars. At the latest Supercapacitors Europe event held in Berlin earlier this month we followed up on the topic with Imperial College's Dr Billy Wu speaking about Supercapacitors as Fuel Cell Life Extenders.
According to Imperial College, supercapacitors in fuel cell cars can:
By addressing the degradation of the proton exchange membrane of fuel cell, the supercapacitor is effectively increasing its lifetime and reducing its costs.
For all these reasons, fuel cells may not be a very sensible option for cars. However they have totally different valuable propositions for local energy generation, grid demand response and related applications. IDTechEx's report Hydrogen and Fuel Cells 2014-2025: Forecasts, Technologies, Markets www.IDTechEx.com/fuel will provide you with all the analysis required to understand how fuel cells are finding its place in this application segment now and in the future.
Top image: European Hydrogen Association
1 http://www.energytrendsinsider.com/2014/02/21/fuel-cell-cars-and-the-shale-revolution/
2 http://theenergycollective.com/jimpierobon/87875/fuel-cell-backers-are-tackling-infrastructure-challenges-research-showing-potentia
3 US shale gas and tight oil industry performance challenges and opportunities. Oxford Institute of Energy Studies March 2014.
4 Energy Aspects, Amrita Sen, Director, In focus - the other tale of shale, October 2013
PrintForwardTweetLikePinredditShare
Previous
Next